Well, who are these wombats? Actually, these are definitely the most bizarre looking creatures you will ever come across with. Primarily found in Australia, these silly and cute looking creatures resemble mostly to short and fluffy bears.

It is very commonly said that visuals can be deceptive and this saying completely goes with these innocent looking wombats.

Although they are cute and fluffy, yet they are originally marsupials and they can be identified to be like a kangaroo and koala.

Their skin color is highly adapted according to its surrounding and protects it from predators. Most of them are either brownish or pale black, which helps them to mix in with the ambience and maintain a strategic distance from predators.

They are generally active mostly in the early night and around evening time, suggesting its nocturnal behavior.

In this article, we are going to come across with some of the most interesting facts about these cute, little wombats!!!

According to the researchers, there exists commonly three types of wombats.

The normal wombat which has an uncovered nose; and other two types of furry nosed ones that literally have quite bristly noses!! The regular wombat has rough fur on their skin and small, circular shaped ears while the bushy-nosed ones have  very fluffy and delicate fur and much bigger ears.

Despite the fact that wombats look adorable and innocent, they have a tendency to have a touchiness and can turn out to be extremely forceful and violent on the off chance that they feel undermined and threatened.

Blessed with strong claws and teeth resembling that of a rodent, they tend to dig very deep holes and burrows.

However, the most intriguing aspect of a wombat has to be its rear pouch. The wombat is well adapted to its surroundings. The rear-facing pouch is very advantageous to the wombat. This is so because while digging, it prevents littering of soil over its off-spring on its pouch.

Though these wombats are generally night-loving creatures, occasionally they come out in search of food on the cooler and rainy days. On the normal days, they are to be seen nowhere, but these cute, little creatures leave a good trail of their path;  the fencings acting as minor obstacles to pass through and their unique cubic poop!!

They are generally plant eating animals (herbivores); and their intake of food contains mostly grass, foliage, roots of the plants, their barks, branches and other plant related items.

Their  incisor set of teeth is mostly similar to those of some common rodents such as rabbits, mice, rat, etc. Their teeth are extremely adapted for chewing very rough and coarse vegetation.

Similar to all other mammals belonging to the herbivorous category, these wombats possess a considerably big diastema, placed in between the incisors and the teeth of the cheek, which is quite easier. According to the research on the dental aspect of these wombats, the teeth development formula comes out to be twenty four.

The color from the fur of the wombats varies from sandy to a brownish color, or from light greyish to black color.

There are three commonly known wombat species and all the three grow up to about 1m and weighs anywhere between 25-40 kg.

The parent wombats create pockets all around their surroundings in which their young ones live and after around 6-8 months, they leave these burrows to find their own ones.

After their birth, the young wombats are taken care of by their mother for the next fifteen months and after about one and a half year, they become capable of reproducing.

When a group of wombats roam around, it is known as a Wisdom.

According to a research conducted by the National Geographic Channel, it has been found that the wombats are generally social, but some of them are also very solitary-loving creatures.

For an instance, the general wombat prefers to spend most of the time sitting or roaming alone here and there during the nights, whereas the hairy- nosed ones prefers company and normally spends time along with 10-15 other wombats of its kind beneath the burrows.

Most of the wombats are found out to be nocturnal and generally search for food and other foliages in the dark of the night.

However, these wombats sometimes really enjoy the sun. Mostly during the winter season, they come out of their holes and soak in the sun for quite a long time to sunbathe and to warm up.

As informed by the Wombat Information Centre, the wombats do not have the tendency to climb trees, as compared to the Koalas, who are their closest relatives. However, even they do not climb the trees, but still they are really excellent swimmers.

Wombats are generally herbivores, which implies they just eat only plant related products and other types of vegetation. The most common food for these wombats incorporate grasses, herbs, some soft branches and barks.

They have a very slow metabolism rate when it comes to digestion. It may take up to 14 days for a common wombat to digest a single course of meal.

The wombats are very much adapted according to their surroundings. They don’t really care for water. They acquire most of the required amount of water from the food products they eat and can sustain for a long time, sometimes even years, without even drinking a drop of water.

They have very unique catalysts in their stomachs to process extreme roughage, however even in this way, despite everything it takes around 14 days for a wombat to process and digest the entire food. 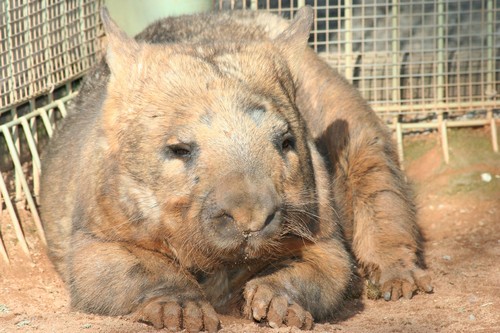 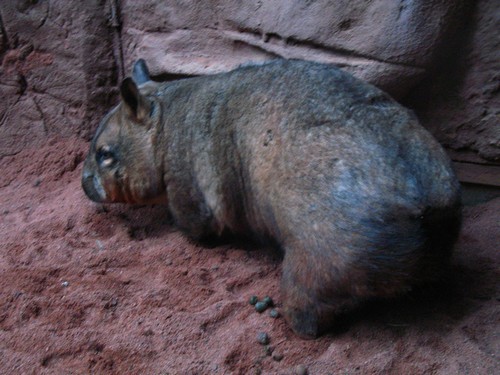 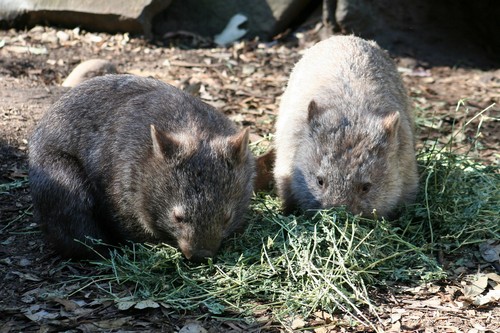 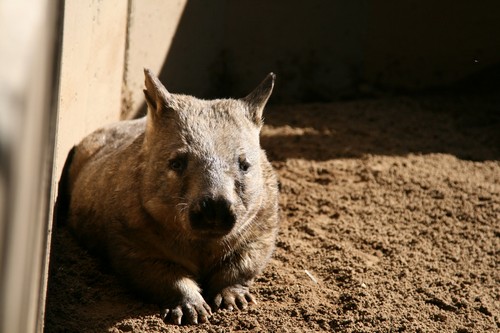 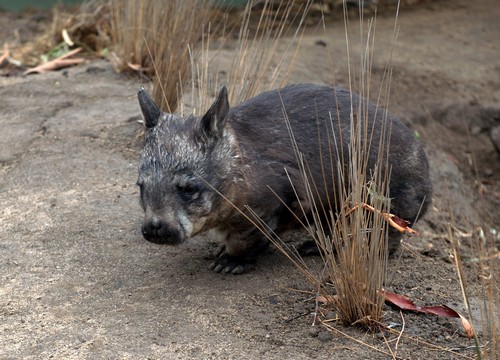 A wombat’s dung are molded like shapes that of a cube.

They utilize their poop to mark and check their region. These creatures tend to put a dung piece of cubic shape on dead trees, mushrooms and boulders. They do so because these cube shaped poops don’t roll and move and hence, would put a sort of permanent mark of their region and territory.

Wombats are very choosy with regard to their mating period. They will only mate with a male counterpart during the times when there is no scarcity of food. In case there is a scarcity of food or a drought hits, wombats will not mate.

The male wombats have a sense of masculinity among them. In order to mate, the male wombats will fight against each other and the winner gets the right to mate with a female. The rough and coarse furred wombat has a tendency to chase the female wombat in round and round circles till the point the female one gets tired and slows her pace of movement. The male then catches up to her and starts mating. As the females are chased, they continue to make some kind of typical cough noises.

Generally, it has been seen that the wombat has an incubation period of approximately 25-30 days. The female gives birth to only one offspring in one turn after every 2 years.

The newborn baby wombat is known as a Joey. 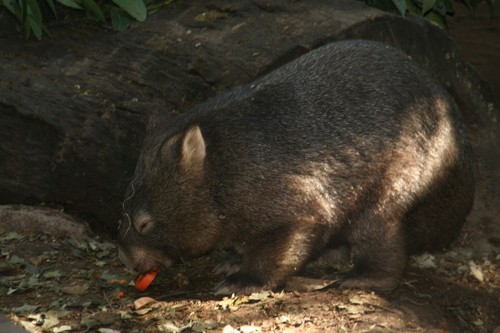 At the time of birth, a Joey weighs only about 3-4 grams and resembles to the shape of a jellybean. Just after the birth, the newborn Joey swiftly jumps into its mom’s pouch in order to complete its development phase and remains there approximately for 5-6 months.

A unique thing about the wombat’s pouch is that it is backward-facing; i.e. the opening of its pouch is towards the rear-side, rather than the chest side as seen in other animals such as kangaroos.

An added advantage of the rear-faced pouch is that when the wombats dig their burrows and holes, any kind of soil or debris cannot get into the pouch and cause any kind of problem for the newly born Joey. The Joey holds its mama’s teat very firmly which in turn helps it to get a good hold and prevents the baby from falling out of its mother’s pouch.

After around 5-6 months, the baby wombats tend to climb out off their mother’s pouch and this continues for quite a few months. They become more mature at an age of 2-3 years and are adapted to live 6-15 years in the forests and for over 20 many years in a captivated environment like zoos and amusement parks. 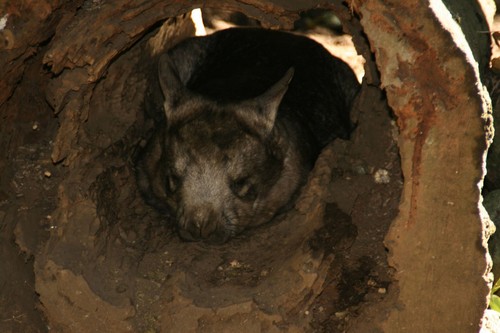 It has been found that out of all the species of the wombats available, only one of them is on the endangered list published by the International Union for Conservation of Nature (IUCN).

This special species is the Northern hairy-nosed wombat which has  garnered so much of attention and distinction due to the fact that it is found only in a very small region called the Epping Forest National Park. As a matter of fact, it has been reported that only 115 of these wombats are left. This is the result of the continuous destruction of the natural habitats of the wombats and captivating them to live in the zoos for our pleasure.