Warthogs are one of the most interesting mammals to behold. Not necessarily because they are beautiful; not at all. The contrary is actually the case. These pigs can be found in many places in the dark continent. They are the main pigs that can readily live in regions without water for a long time. By enduring a higher-than-typical body temperature, the warthog can retain its body water content longer than normal, and use this water for cooling. This water conservation mechanism is similar to the one present in camels.

Like already implied in the preceding paragraph, warthogs have striking physical characteristics. In fact, you only need to see a warthog once to remember it the next time you see it.

A warthog weighs almost the same with normal pigs but the males are usually bulkier than the female. It is easy, however, to recognize warthogs since each animal has a very massive head with two horn-like growths on them. These growths look like warts, hence the name. Two sets of warts can be seen somewhere around their eyes too.

Warthogs have a very flat face which lodges a long pouty nose. But the natural position of their eyes is what makes them even more impressive. A warthog’s eye is mounted on top of its head in such a way that it can easily watch out for impending danger from its predators when it is eating grasses. The warthog’s vast tusks are abnormal: The two upper ones rise out of the sides of the nose to frame a crescent; the lower tusks at the base of the uppers are worn to a sharp front line. One thing that is quick to notice in a running warthog is its raised tail which looks like a waving flag. Funny as this is, it helps younger warthogs successfully follow their mother when it is running. Although warthogs are known to run slowly in short distance, they have been seen to sprint with athletic velocity.

Since the warthog is a creature of the wild, one would think its diet would consist of a lot of meat. But this is not the case in any way.

The warthog is a devoted herbivore that would not sacrifice green grasses for any meat on earth. It is known to feast on fresh shoots of plants in bushes and shrubs. Depending on availability, it can also eat sweet fruits that it can find. But there are times when these desired foods are not readily available. In the summer season when the tropical heat of Africa is at its maximum point, the warthog resorts to feeding on roots and tubers. With its powerful mouth, it digs deep into the soil to uproot and eat sweet root or tuber crops especially sweet potatoes.  As an omnivore, it sometimes helps itself to mouthfuls of edible insects mostly flies, termites and grasshoppers.

The natural habitat of the warthog is tropical habitat. Since it thrives in the heat of Africa, it is typically found in thick forests and sometimes near deserts.

Although there have been attempts at domesticating this wild mammal, it has mostly refused to be domesticated; preferring the brutality of the wild to the relative tranquility of modern domestication.

In many ways, the behavior of warthogs is similar to those of a domestic pig. The major differences would simply be in their physical appearances, and, of course, that extra touch of roughness associated with most beasts living in the wild.

Warthogs are day creatures that spend the bulk of the living day lights in search of good food.  They are mostly found living together in groups of four or more which consist of the male, sow and two piglets or yearlings. When it comes to feeding, and as already indicated, warthogs have developed the characteristic habit of bowing on the front knees while munching away on grasses. This posture, together with their eye which sit high on their heads, give them the alacrity required to escape predation or possible capture.

And after a long day, they retreat for some peaceful night rest. To this effect, they protect themselves in tunnels. But the interesting part of what would have been an ordinary tunnel entrance is that they enter these tunnels with their tails first. Why would they do this? You will find out as you read on.

Warthogs are naturally very egregious animals. They socialize freely, and this socialization usually happens in three primary gatherings, specifically single hogs, male gatherings and matriarchal gatherings. Matriarchal gatherings comprise of grown-up sows with their young ones. The male warthog plays an important role in the raising of piglets and at times connect with sows outside the mating procedure. Many times, warthogs engage in group mating. That’s just how seriously they take socialization.

We wrap this part up with what can be called Mud Bathing Exercise. Warthogs can as often as possible be found at waterholes where they swim and energetically frolic in mud or muddy water. No wonder many African tribes refer to dirty people as human warthogs.

The warthog does not fail to impress in terms of life cycle too. For an animal that weighs up to 150 kg, it is poised to have everything in excess, and it sure does.

During the reproductive season, a warthog and a sow engage in a very rough mating extravaganza. Sometimes, this mating happens between three or more warthogs at the same time. Soon after, a pregnancy begins which lasts between 170 and 175 days (roughly six months). After six months of gestation, the piglets are born. There are usually two of them born at a time; a phenomenon which sharply contrast the abundant numbers common to domestic pigs. 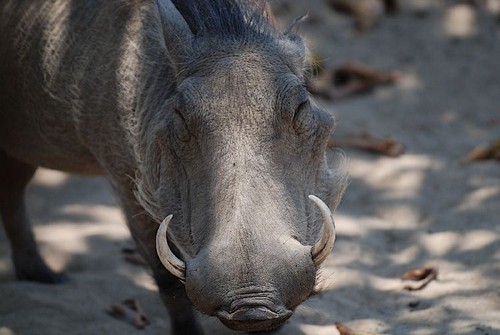 These newborns take as much as one and half years to reach maturity. From this point, they live a life of independence, facing the challenges of feeding and defense against predators by themselves. From birth to death, warthogs live approximately 18 years of energy-filled, action-packed lives. 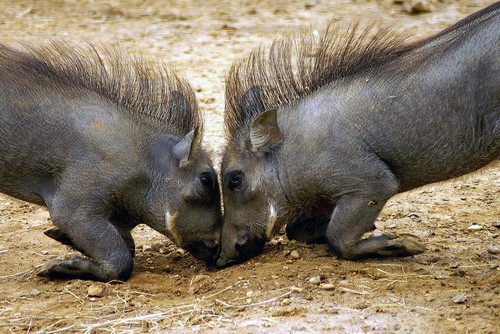 Having assimilated the basic facts about warthogs, it is time to appreciate their special features in detail. As it is with every creature created by God, there are more interesting facts about the warthog; some of which are peculiar to just them. Read on for the facts.

They Were Named After Their Warts

This is hardly any shocker as it is very predictable. Since every warthog in existence has projections which look like warts on their forehead, scientists and taxonomists were spared the several hours usually spent brainstorming the name of a specie. Almost unanimously, it was called warthog.

Warthogs do not give birth to many piglets at once, hence have no need for too many teats. Since they produce an average of 2 piglets per year, or 4 at most, they have evolved into possessing just 4 teats, which is actually more than enough. The domestic pig has two rows of teats on their undersides designed to feed up to a dozen piglets. 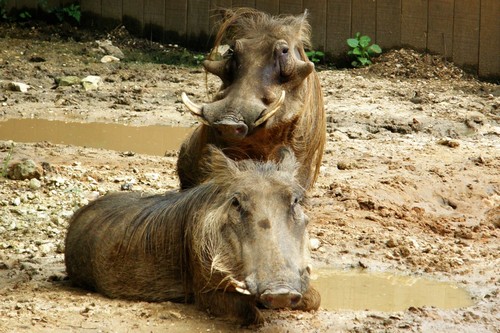 Make no mistakes. As already explained, warthogs are social creatures who often come together. But their coming together is often for business. For the males, it is just for mating purposes.

After mating, they go on their own. It is the female hogs and their offspring that are the true social hogs. They usually move in groups of threes which consists of the sow – the female hog – and about two offspring.

In an earlier section, it was revealed that wart hogs enter their burrows tail first. The reason for this action is to be able to defend themselves against would-be attackers or intruders.

But another reason for this tact, which is a rather more interesting one is that as soon as they wake up from the night’s rest, they burst out of their burrows with incredible speed and energy. This is usually done to escape to safety just in case there is any predator stalking around.

They Will Rather Run Than Fight

The strength of warthogs is not in question neither is their brutal aggression. They have all the energy in their 150 kg body but they will rather run than even attempt to fight off an intruder. This pacific attitude of warthogs should not be mistaken for naivety or timidity. When provoked, warthogs can unleash terror on the intruder. Just imagine an angry 150 kg beast charging at you with full speed. The sanest thing to do is to take flight. 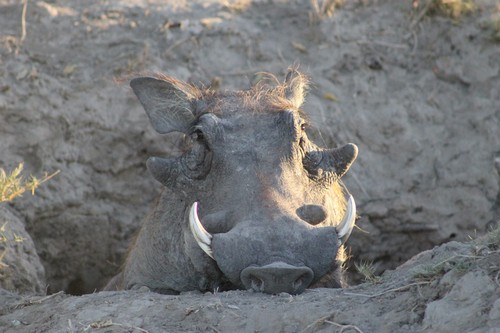 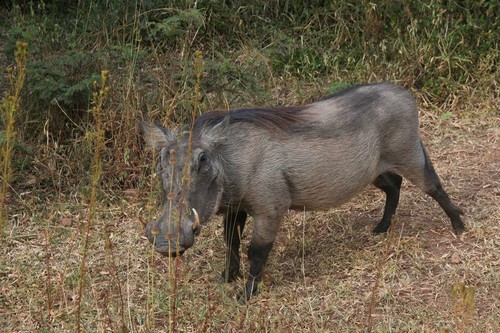 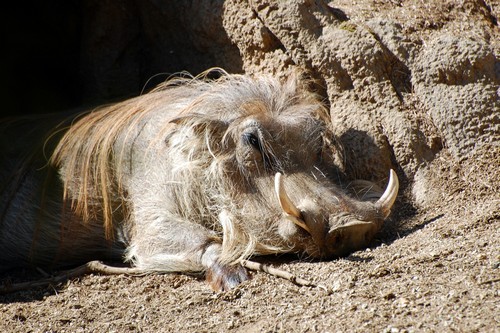 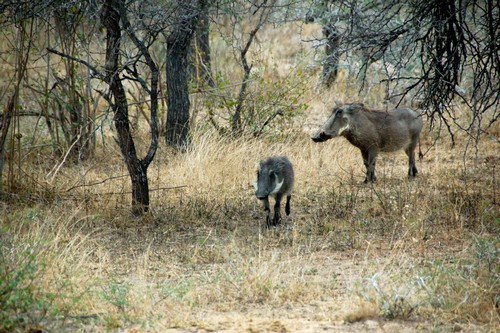 Warthogs are wild pigs that possess many unique characteristics as have been described here. They value their safety, and would cause no other beast any harm. But like every beast on the face of the earth, they know just when to strike!