Ever heard about a Wallabies? What about a kangaroo then; does it ring a bell?

So come and let us endeavor on a journey where we will come to know various unexplored facts about this little creature and fall in love with it!

Similar to the famous Aussie kangaroos, the wallabies are a species of the marsupials. These vary from being tiny, small sized to medium sized and are generally located in the habitats present in the Australian continent and the nearby islands.

The wallabies are said to be very close relatives of the kangaroos. Scientifically too, these wallabies have been found out to have the same ancestral roots as the Aussie kangaroos which is the largest marsupial known to mankind.

Though these wallabies are generally smaller as compared to the kangaroos, yet some of them have been spotted to grow up to as tall as 6.5 feet.

It has been found out by the biologists that there are approximately thirty different varieties of these wallabies in the entirety of the Australian soil and its nearby islands.

The wallabies are known to have a pair of strong and sturdy back legs which it generally uses for the sole purpose of hopping so that it can roam and move about here and there.

The forelimbs of these wallabies are very small and weak as compared to the limbs of other marsupials and are most commonly used for the sole intent of feeding. It also helps the wallabies occasionally with maintaining its bodily balance.

The tail of these wallabies is mostly seen to be on par with its body size and is often seen to have a length as same as the entire length of the wallaby’s body. Apart from the length, the other significance of this tail is that it also helps the wallaby in time of emergency and for self defense.

The female members of the marsupial species have very unique fact regarding their overall body structure. Since these wallabies belong to the marsupial family, the females ought to have the signature underbody pouch similar to the kangaroos.

This pouch plays a very important role in the wallaby’s attempt to raise its new one. These wallabies are generally found out to have an incubation period of approximately a month. After one month, the female wallaby tends to give birth to a single baby.

The babies of these wallabies are known as Joeys. The Joey then tends to crawl up above to its mum’s pouch on the underside of her body. It is here in the pouch that this Joey will get all the nourishment and care and will stay for the foreseeable future until it is mature enough to set on its own path.

The lush green grasses make up the most crucial portion of the wallaby’s diet, along with the leaves from the trees, shrubs, barks as well as berries. The wallabies are known to be very socializing creatures and are often seen wandering and looking for food and other edible stuffs with its fellow group mates.

These dingoes and foxes are considered as the main foes of these wallabies apart from some major reptiles such as crocodiles and snakes, which have also been seen to attack the wallabies residing close to the waterbeds and other river banks.

Although these wallabies have very strong predators to fight against, still it has an upper advantage in the combat due to the size of its tail. The wallaby’s tail is so adapted according to its habitat that it can easily fend off many of its attackers just by merely beating them up with the long and powerful tail.

It has been commonly seen that these wallabies are generally found in the savannas and the open woods of the Australian continent and its neighboring islands.

These wallabies are very habitat specific and there are instances which show that many of the species of these wallabies have been named after the habitat they survive in. The small nosed rat wallabies, which are also known as the smaller version of the bettongs are known to reside in the burrows in the desert’s scrublands. These burrows are made by the wallaby itself and since it replicates the behavior of a termite or rat, these wallabies are fondly called the rat-wallabies.

Similarly, the rock wallabies have been found dwelling on the vertical rocky walls present in the Southern part of the desert. The tree wallabies are specially seen dwelling around the high canopies of the dense rain forests in the areas near New Guinea and Australian islands and the well known musky wallabies are mostly located around the wetter side of these rain forests, but under the canopies.

A unique fact regarding the wallabies is that they tend to stick to its original habitat and do not prefer to wander about here and there searching for new habitats, except for one particular species; the Red-necked wallabies. These Red-necked wallabies have been spotted in various habitats all around the Australian continent, which includes the chilly, icy mountains of the Tasmanian range.

The quokkas are however found only in the two islands which are completely windblown and are situated entirely off the mainland Australian southwestern sea line.

The most interesting fact of the wallabies which distinguishes them from most other wild animals is that the largest species of these wallabies are not found in the deep jungle or in the dense rainforests; rather they are found openly in the public parks, golf courses and also in the gardens situated on the outskirts of the city. 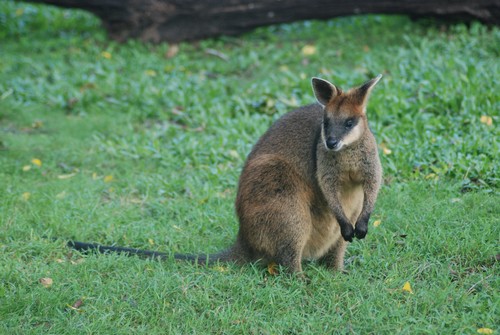 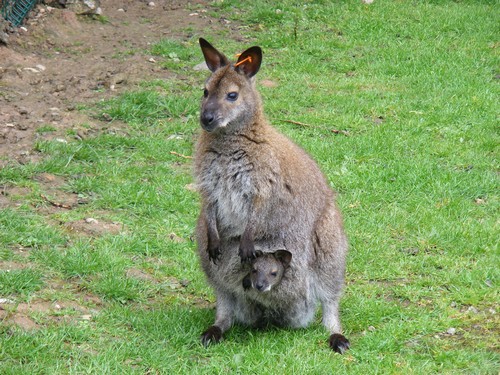 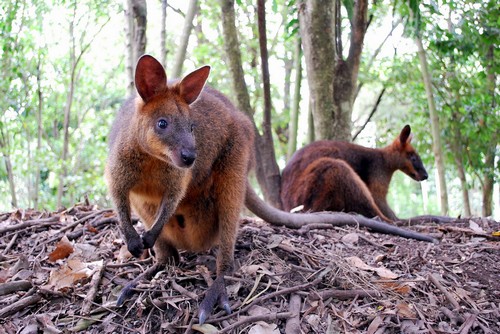 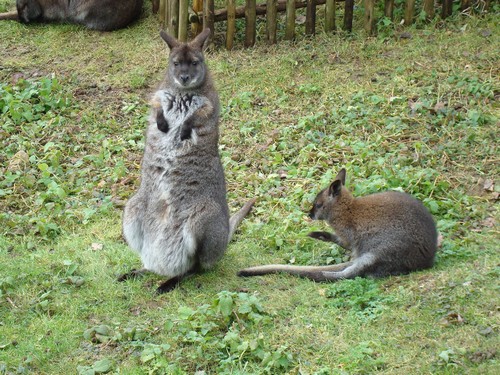 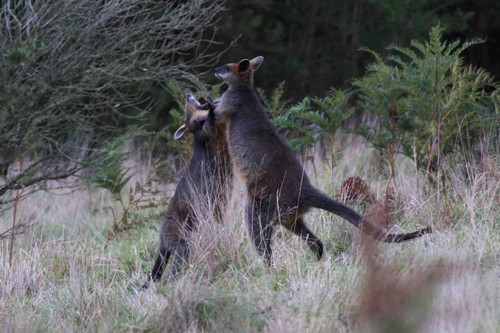 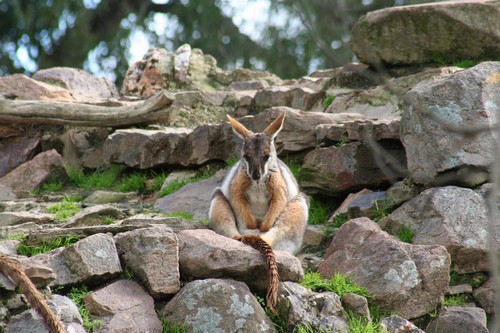 The marsupials are generally found out to be herbivores. This means that these wallabies are mostly fond of eating the natural vegetation which includes leaves of the trees and some small plants.

It has been noticed regarding the habits of the marsupials that they tend to make use of their hands more often while pulling down the branches of the tall trees which they are not able to reach.

These wallabies also possess a chambered tummy which functions almost the same as the stomach of the ruminants which include the sheep, goats and cows. The most crucial advantage of having such chambered stomach is that like the cows, these wallabies can easily store their food in one of the chambers, even after swallowing it for hours and then can easily able to bring back the entire swallowed vegetation, chew it all over again as a cud and swallow it once more for the ultimate process of digestion.

The larger species of the wallabies are seen to have fed themselves in groups, or mobs which they are preferably known as, but it completely depends on the quality and quantity of the vegetation which is present in that particular place.

It has been seen that most of the marsupials including the kangaroos and wallabies are commonly grazers. This means that these marsupials are very fond clipping the lush green scales of the grasses which are mostly found in the grasslands of the Australian savannah. 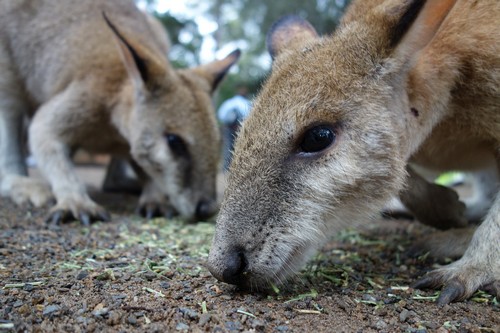 The female wallabies are found out to give birth to small, little babies which are called Joeys. These new ones are then carried by the mother wallaby in her special pouch on the underside of her body, known as the marsupium.

Inside the pouch, these Joeys attach themselves to the mum’s nipples and get the required nourishment for quite a few months, until it is ready to venture out on its own endeavors. The Joeys are very mischievous in their day to day activities. It often pokes it’s head up from the pouch to look into the world where they will head out in a few months of time.