Turtles are reptilian animals. They are amphibious in nature and even though they slow to move on land their movement is quite lucid under water. They are characterized by a hard shell developed from their ribs to protect them. There are three hundred twenty-seven species known today. They have been on planet Earth for about two hundred million years.

From early fossils, it can be seen that earlier turtles could not retract their heads but otherwise, the turtles are quite similar in shape to their ancestors. Turtles are amniotes because they breathe air and do not lay eggs underwater. Many of the turtle species can live for more than a hundred years of age. Turtle species are spread throughout the world and are found on every continent except Antarctica.

Turtles can be herbivores or carnivores. Many turtle species are now endangered.

Turtles have evolved into many species of different sizes. In terms of the largest, the leatherback turtle can weigh 270 Kg to 680 Kg and can be up to 6ft long. While the smallest, however, is the speckled padloper tortoise of South Africa at 3.1 inches another small turtle is the 4 in Bog turtle. In North America, the largest turtle is the alligator snapping turtle. Most turtles have 5 toes on each limb with a few exceptions while there are some which only have four.

Turtles have strong beaks which they use to cut and chew their food. Sea turtles have glands near their eyes to expel the excess salt taken in from the sea water. Some turtle species have the ability to absorb oxygen from their skin located on their necks allowing them to stay underwater longer and even hibernate underwater.

The turtle shell is the most distinctive part of the animal. The shell is covered with plates which come from the skin. The shell is divided into upper and lower regions. The shell is totally rigid and it means turtles breathe differently compare with other reptiles. There are two ways in which the turtles breathe. First, they use limb pumping by which they suck air into their lungs and then expel it by moving limbs in and out relative to the shell.

Second, when the muscles of the posterior side contract the pressure inside the lungs decreases forcing air from outside to fill in, it works the same way as a mammalian diaphragm. Turtle shells have some beautiful design on them like the eastern painted turtle which has colors of yellow, black, orange and red markings.

Inside the shell, turtles have skins similar to other reptiles. They shed scales slowly. Turtles are amphibious creatures and although their limbs are similar to land based tortoises they have webbed feet and longer claws. The webbed feet allow turtles to move freely inside water peddling with their left side and right side feet alternatively, similar to a dog paddle. The larger the turtle the lesser it swims. Consider that species like the alligator snapping turtles. They just mostly walk on the floor of the river bed or lake.

Sea turtles are mostly aquatic, for swimming they usually use their front flipper to generate force inside the water. The back feet are used as a rudder.

Additionally, the male sea turtles hardly leave the sea, it’s only the females that slowly come to the land to lay their eggs.

Like other reptilians, turtles are highly adaptive to different areas. They can be found on almost every continent. Most of the turtle species are from Asia and North America.

In Europe, only 5 species have been found. Some turtles are synonymous to their area like the Roti Island snake-necked turtle which can only be found on the Roti Island in Indonesia.

While the African helmeted turtle is most commonly found species in Africa, it is of the scavenger hunter types and mostly eats fish and small birds.

Most turtles are found in the tropical region of the world as they cannot tolerate the cold weather well. However, the Blanding’s turtle has been spotted swimming under the ice in the Great Lakes in the United States.

Turtles are also known to travel great distances especially the larger species of sea turtles. The leatherback sea turtles can travel almost 10,000 miles each year. Even after travelling such distances the female turtles always return to the same spot where they were born to lay their eggs.

Turtles are not social animals and do not interact with other turtles. They have very good night vision due to a large number of rod cells in their retina. In experiments, turtles have been found who they can navigate through the maze and have long term memory lasting almost 7 months. Turtles also have an excellent sense of smell as even the shell contains nerve endings. 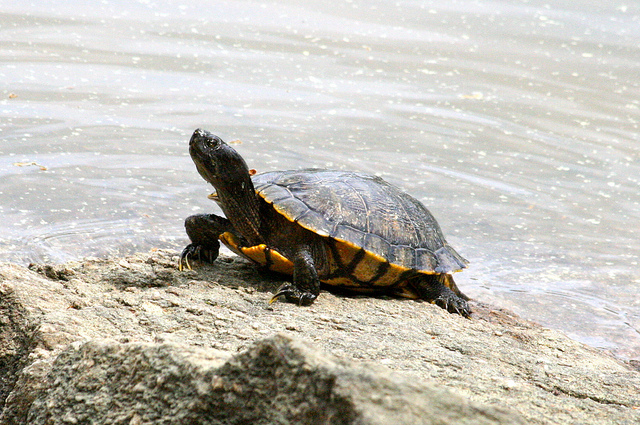 A turtle’s diet depends on the environment it belongs. Large turtles normally eat aquatic plants and small insects, worms and snails. They are also known to scavenge dead marine animals. Many of the small freshwater turtles are carnivores and eat small fish and other aquatic life. Turtles with stronger jaws are also known to eat jellyfish. Green sea turtles, however, are completely herbivore and have mostly algae.

Some turtles have a unique way of capturing their prey. The alligator turtle, for instance, it lowers its tongue into the water which looks like a worm. It slightly moves the tongue to attract the fish and quickly snaps its jaw. The alligator turtle also eats snakes, frog, fish and other turtles.

During mating, males use their long claws to stimulate the female. All the turtles lay their eggs on land. The female slowly come on land and dig a small hole in mud or sand to lay their eggs. No species of turtles nurtures their young, the eggs are left on their own. 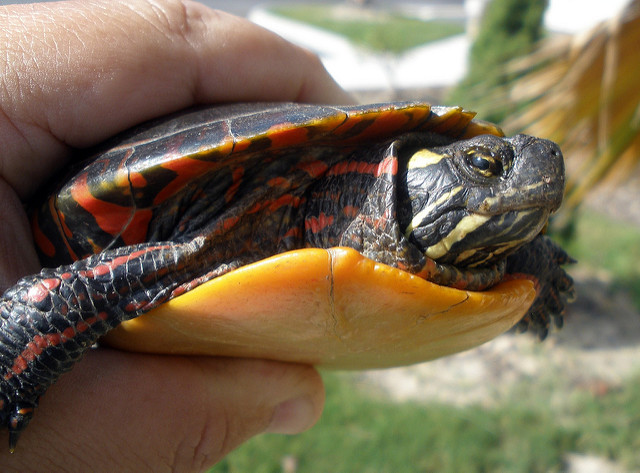 Some turtle species are ready to mate at a few years of age while larger species can sometimes take fifty years to reach their mating age. The mating ritual also differs on the type of species, some turtles fight over the females and some attract them. In order to mate, the turtles connect their posterior to connect their shell openings from behind. The eggs are small and round and can be hatched in a couple of months.

Female sea turtles can undertake long voyages to lay their eggs. They can lay up to one hundred eggs at one time. It may be noted that the temperature of the beach determines the sex of the offspring. In normal temperature condition, there is an even number of male and female offspring, but due to the temperature rise, more and more female turtles are being born skewing their sex ratio. This is an important matter in turtle conservation.

In a survey conducted in 2011, it was reported that the top 25 endangered species of turtles are most likely to become extinct and an additional 40 species can follow them. The effects of pollution and changing weather patterns have affected turtle population throughout the world. The list is made every four years. Almost 50% of all turtle species are considered threatened. In spite of conservation efforts turtle species are most likely to be extinct than other vertebrae.

Of all the species, the Asian species have the highest endangered number on the list. This is from the fact that turtles are hunted for their meat which has not yet been banned in many parts of Asia. In the list, one specie is already marked as extinct. 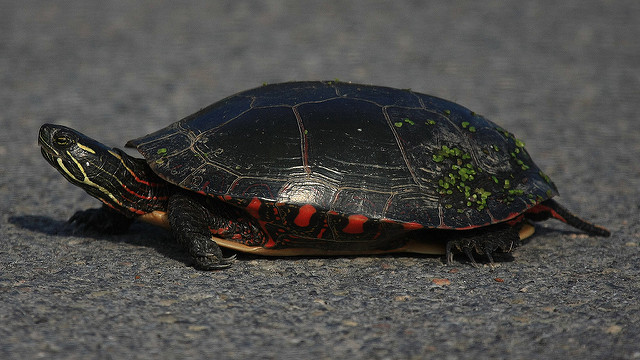 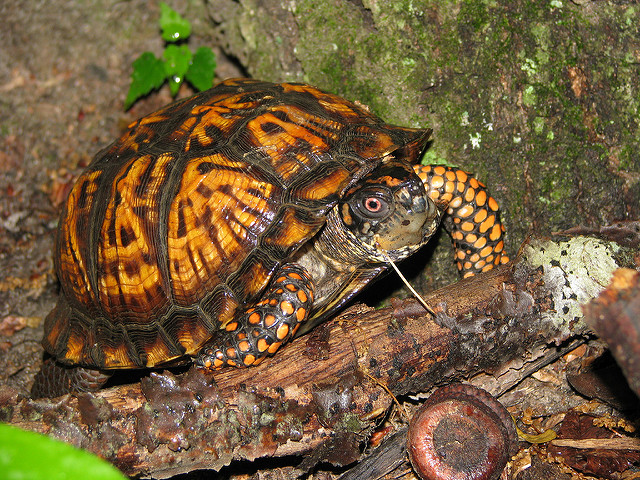 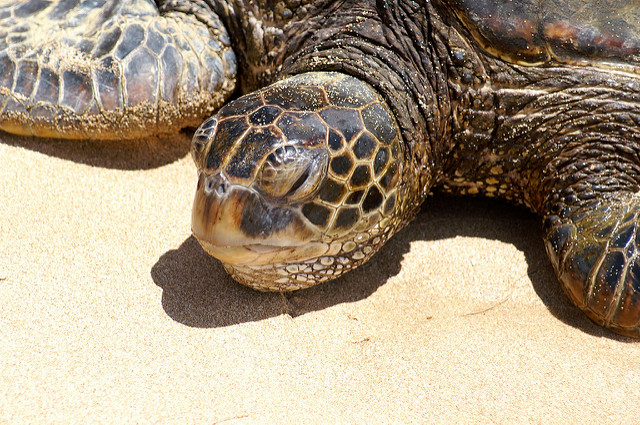 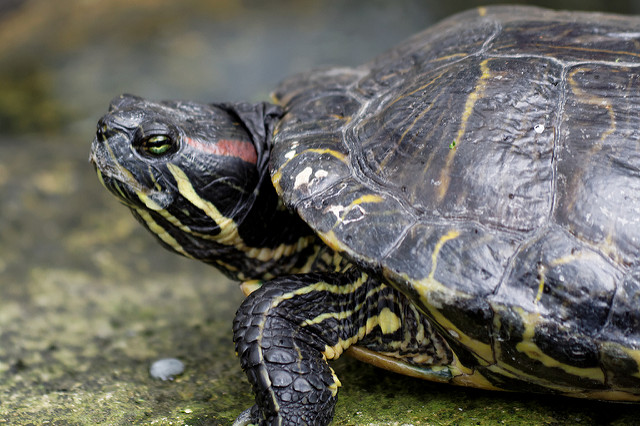 Some of the reasons behind such high endangered rate are – natural habitat destruction, consumption in Chinese medicine and also keeping them as pets. Lately, the Chinese have begun efforts to stop hunting turtles in the wild and to farm them separately for their meat to be used in medicine and gourmet food. But still wild turtles are being hunted in large numbers and sent to the market, this has led to the Asian Turtle Crisis.

Now, it is estimated that almost 75% of turtle species in Asia have become threatened. Sometimes sea turtles are caught in fishing nets.

In some places in India, like the coastal state of Orissa, there is special protection given to turtles when they come and lay their eggs. Afterwards, the eggs are guarded against being stolen or eaten by dogs. This initiative has increased the number of turtles returning to lay eggs each year. 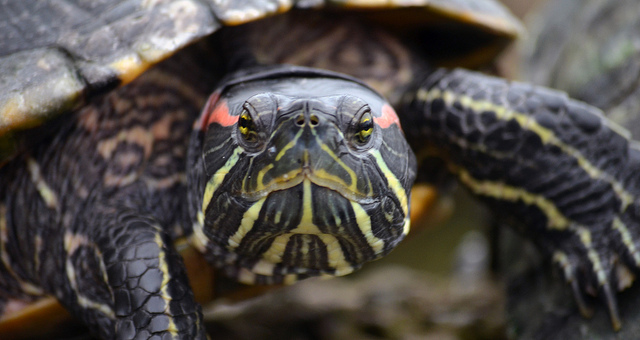 In Florida in United States, harvesting turtles is legal and they are supplied to other parts of the world. Considering the fact that turtles are one of the animals with the longest existence and have remained unchanged even after millions of years of evolution their fast disappearance is a worrying trend in the ecological system.