The toucan is colorful bird that is medium-sized and has a large beak for its size, the longest beak in the world when taking into consideration the size of the beak and the size of the bird.  The beak is normally brightly colored too. They are from the Ramphastidae family with close relations to American Barbets. The family further has about five genera and a total of 40 species.

Although they are capable of flying, toucans will move from tree to tree mainly by hopping and if they have to fly, most of the times they will simply glide for short distances.

Rather than create their own homes, toucans will occupy hollows found in trees that were created by other birds such as the woodpecker.

To establish a hierarchy in their groups, toucans will engage in a fencing like behavior using their beaks to wrestle. They rarely migrate and will live and breed in one given area. They live in flocks that vary in sizes. The size can be either 5 or 6 birds in one flock.

They can live for a period of up to 20 years, although there are few animals that prey on them such as the jaguar, other cats and large birds. Rats and snakes may prey on the toucan’s eggs.

Due to their colorful feathers and beak as well as their small size, toucans are at times kept in captivity as pets and there is a market for them in the exotic pet market. People admire them for being colorful  thus they are viewed as making a place lively.

Their color do not only adds beauty, but also helps to camouflage them in the bright colors of the tropical and sub-tropical forests and its environments.

They are relatively noisy birds and have been long admired for their color and beauty. Toucans have been featured in various advertisements, films and cartoons. They have also been used as mascots for various teams and political parties such as the Brazilian Social Democratic Party.

Although there are 4 species in existence, the species that is widely known is the Toco Toucan.

Characteristics of the Toucan

Toucans are generally small birds; however they vary in size according to the different species. The smallest toucan is the Pteroglossus inscriptus also known as the Lettered Aracari which grows to about 29 centimeters and weighs about 130 grams. The largest toucan is the Ramphastos toco also known as the toco toucan that grows up to 63 centimeters and weighs up to 680 grams.

They have a tail that varies in length and it can reach up to half of its body’s length. They have a rounded tail and compact body with short wings. And the size of the wings can be attributed to the fact that they live in forests and therefore do not fly for long distances. The size of its wingspan is almost the same as the length of its body from the tip of the beak to the tip of the tail.

Contrary to what many people will think, the large beak of the toucan does not have a lot of weight. The beak is made of bone tissue that is filled with keratin that is spongy in nature. This spongy tissue makes the beak to be really light. The long beak enables them to feed while resting in one place since they can reach fruit that is within reach without having to move.

The beak has further advantages in terms of intimidation. Being large, it can be used to threaten other birds, especially birds that live in hollow parts in trees. The intimidated bird will leave the hollow and the toucan will take up residence in it. However their beak seems big, but it is not  that strong, the toucan cannot use it as a weapon that often.

The long beak further helps the toucan to reach down holes as well as reach into the nests of other birds and get to food that other birds cannot access due to short beaks. For better feeding, toucans also have a long tongue that is up to 15 centimeters long. This enables it to reach further into holes as well as to catch insects, frogs and small reptiles.

The toucan has short strong legs and it has curved toes with sharp claws, which enable it to hold onto branches properly and be able to hop from branch to branch comfortably.

They have three vertebrae in the tail that are modified. The three vertebrae are jointed to the spine by a ball and socket joint. This unique modification enables the toucan to bend their tail forward to the extent the tail can touch the head and they sleep in this position.

Toucans originate from Mexico in Central America and parts of South America as well as the Caribbean region. In Mexico, they are found in the southern part. They live in sub-tropical and tropical forests, living in the hollow part of trees.

Since they cannot make hollows in trees by themselves, they live in hollows made by other birds such as the woodpecker, normally intimidating the woodpecker forcing it to leave. Once they find a hollow tree or log they can inhabit, toucans will make their nests there and live there. 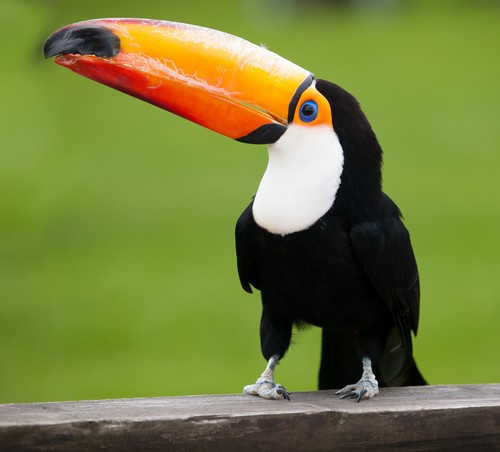 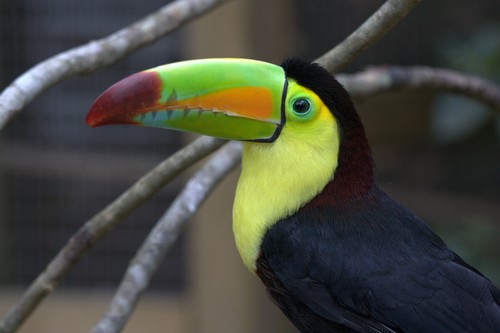 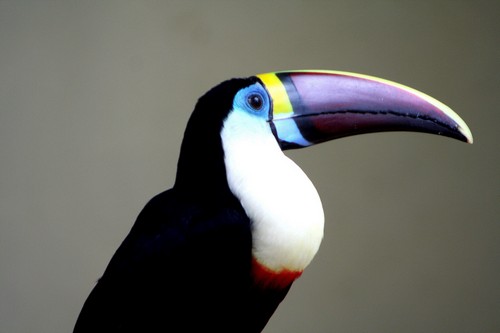 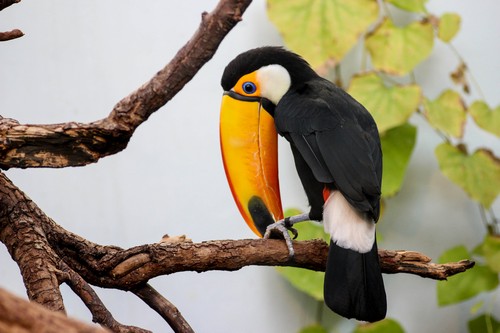 Diet of the Toucan

Toucans are omnivorous birds by nature. Although they predominantly feed on fruits, they have been observed to be predators targeting prey such as small reptiles on insects. Apart from preying on these, toucans will also invade the nests of other birds and eat the eggs or nestling if they find them. They will feed on fruits while feeding on prey when the opportunity arises.

They will mostly feed their young ones with prey they have killed as compared to feeding them with fruit. Food is widely available in tropical forests due to the availability of fruits and as they eat, toucans have become a very important vector for dispersing the seeds of the various fruits once they have eaten. They therefore play a very big role in the ecosystem of tropical and sub-tropical forests.

The breeding cycle for the toucan is on a yearly basis and when it is breeding time, they will look for hollow trees or fallen logs which they use as their mating spots. Mating occurs and the female toucan will lay on average two eggs, which are pure white in color. The eggs are laid in the nests, on the softer parts of it. 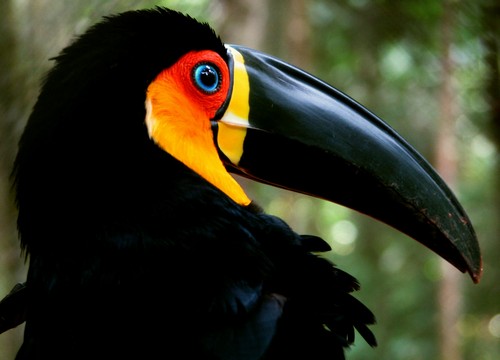 Once the eggs are laid, they will hatch after about 16 days of incubation and the chicks usually have no feathers and the beak is not as big as one would expect. The beak is small and it will grow in size as the chick grows and develops. The feathers will start to grow when the chick is about four weeks old.

Chicks hatch when they are blind and will stay blind for a period of between 16 and 18 days. They stay inside the nest for up to 6 weeks. Both the male and female toucans are involved in taking care of the chick and both will actively participate in feeding it.

They are not migratory birds and therefore they will breed in the same areas that they live unlike some birds that migrate to other places during the breeding season.

The toucan is not viewed as an endangered bird due to the fact that they exist in large numbers in their habitats. They are spread in various parts of South America and this ensures that their population is widespread and safe The current population of the Toucan is unknown because of the broad extent of its habitat. The toucan’s habitat are widely spread over more than twenty thousand kilometers. 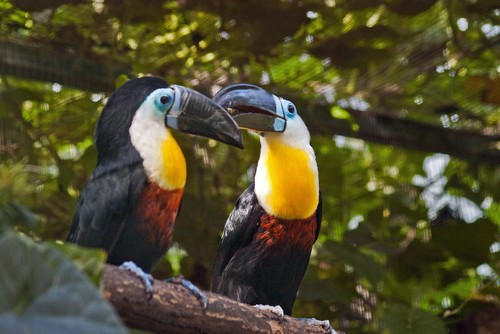 And  as with other habitats found in forests, the tropical forests that toucans live in is under threat of industrialization and other human activities that lead to forest destruction. However, the toucan is well capable of adapting and this ensures that even with changes in their habitats and their environments, they are still able to live and their population is safe.