The term Mastiff is roughly translated to mean a nomad dog. The Mastiff is a dog with a long history and is said to have its origins in Central Asia. It is a dog that was used by nomadic tribes in Central Asia to guard their livestock. It is usually regarded as a primitive dog which exhibits the spirit of endurance and has a rugged nature. All these attributes helped the dog to survive its natural habitat found in high altitude regions.

The Tibetan Mastiff has been able to maintain its natural instincts of herding and guarding flocks. These instincts include confronting and warding off predators that may threaten the flock. This dog breed is exceptionally intelligent and tough headed, attributes that make them difficult to socialize and train.

As the name already suggests, the Tibetan Mastiff originated from Tibet. Although the dog’s history is believed to be lengthy, its historical documentation is a bit hazy especially before late 19th Century.

In the past, the Tibetan Mastiff was used to protect and guard property and animals. It was also used to guard Tibetan monks, Buddhists, and lamas. Given its threatening looks and ferocity, the dog is well suited as a guard dog.

The Tibetan Mastiff is not the right dog for you if you are a new dog breeder. Despite its protective nature, the Mastiff is a very difficult dog to control and train. The dog needs someone who is seasoned in dog training and who understands its temperament. The dog is strong willed and thinks independently and this makes him hard to control.

This is why it is important to start training the Mastiff as a puppy when it still has a manageable size. The puppy should be taken through basic obedience training in a puppy kindergarten. The puppy needs proper reinforcement training which is based on a system of rewards and not force.

Socialization of the Tibetan Mastiff puppy should be undertaken early to prevent it from developing a fearful and suspicious behavior. The puppies should be exposed to various situations in the household so that they can easily internalize and become aware of their surroundings. Training should be done to a puppy until it becomes an adult. This will enable the puppy to be able to distinguish between a normal and a threatening situation.

In contrast to the mature Tibetan Mastiff, the puppy is very active and loves to play and roam around. They, therefore, require enough space that is traffic free and safe. Since Tibetan Mastiffs are territorial, it is good to set the boundaries of the puppies by breeding them in a yard with a relatively high fence around it. The puppy should always be put on a leash to prevent it from wandering off.

Tibetan Mastiff puppies are compulsive chewers and should always be controlled lest they chew some of your prized possessions. They are known to chew things like furniture, clothing, and anything that their teeth can bite. They should therefore not be allowed access to the house until they reach a mature age of about 4 years. The Tibetan Mastiff puppy should always be kept busy because it is a very destructive animal when bored.

The puppy should not be chained alone in the yard because it is a social dog that needs the company of other dogs and humans. A chained puppy can develop aggressive and destructive tendencies which greatly affects its temperament.

The Tibetan Mastiff is physically endowed with a double coat that is heavy and coarse. Furthermore, its undercoat is woolly and soft and keeps the dog warm and comfortable especially in cold environments. Nonetheless, the undercoat becomes thin during warmer months to reduce the effects of high temperatures on the dog. The outer coat is not usually curly like that of many dogs but is hard and straight.

Perhaps the most notable feature of a Tibetan Mastiff is its heavy mane which covers its neck up to the shoulders. Moreover, it also has a feathery and heavy coat on its tail and upper thighs. The male dog has a heavier coat and mane than the female.

The coat is of different color shades including gold, brown, and blue. Markings can also be found around the dog’s eyes, on the lower half of its forelegs, the inside of its hind legs, under the tail or the breeches. Some Mastiffs have white markings on their feet and chest only and nowhere else. However, their color does not make them any different in terms of temperament and behavior. It has a lifespan of 12 up to 15. 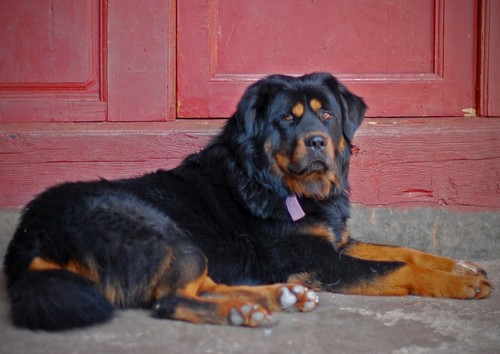 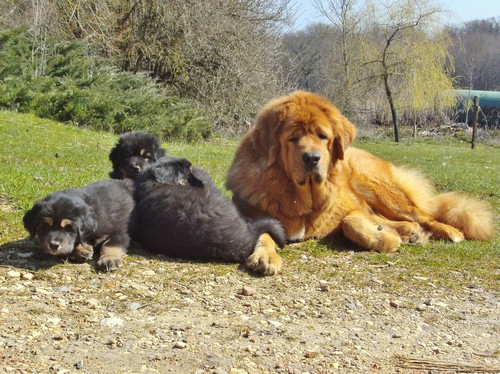 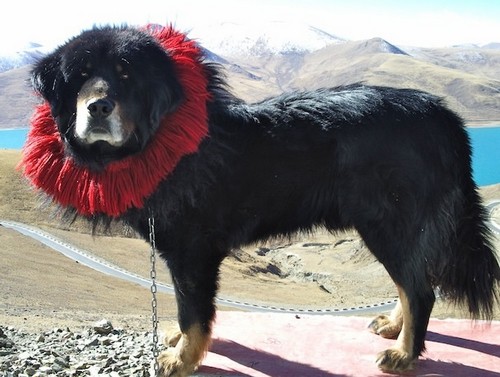 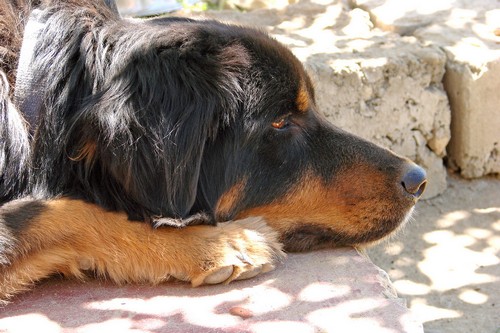 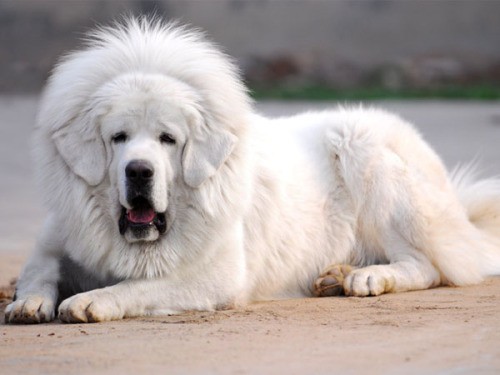 The Tibetan Mastiff is a stubborn and independent dog breed that can sometimes be very difficult to control. It is an intelligent dog that is self-assured and ready to challenge authority when it feels like it.

The Mastiff is a dog that always wants to please its owner to please himself. He likes acknowledgments from the owner and will sometimes overdo things and need to be contained. He is a hard working dog that performs his duties seriously. He has a reserved attitude to strangers and will maintain his aloofness to people that he is not familiar with.

The socialization of the Tibetan Mastiff should be a continuous process which should start at an early stage of its life. This is because when he is not properly socialized, the mastiff has the tendency of becoming territorially aggressive. This can be done by inviting guests regularly to your home for him to be accustomed to visitors and strangers. You should regularly take him for a walk in parks, stores, and other social places to refine his social skills.

Nonetheless, The Tibetan Mastiff is naturally an understanding, kind and gentle animal that understands the human nature. He is not only a hard worker but also protective, loyal and fearless. He is a large dog that is suitable as a guard dog who has perfected the role of a protector over the years. He is an independent protector that will not seek guidance from you. He is the type of dog that will not always obey your commands when he thinks he is right.

The Tibetan Mastiff is a quiet dog who will interact peacefully with others so long as it is comfortable and have no pressing needs. Nevertheless, they turn into annoying barkers at night when left outdoors and only quieten when they are taken indoors. 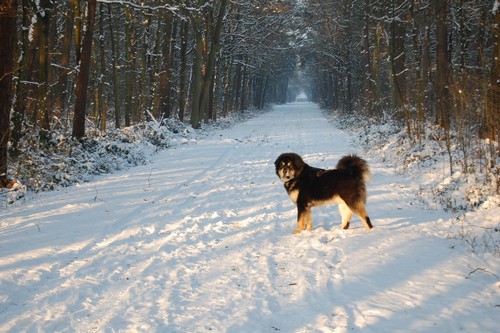 Make sure that your yard is well fenced to contain the Mastiff. This is because this dog is able to climb out of low fences and escape from the yard. The Mastiff should also not be left outdoors for too long because they are known to dig around and develop a territorial tendency which makes them even more aggressive.

The Tibetan Mastiff is not suitable for homes with young children. They can be tolerant with young children from their family especially when they have grown up together. However, the Mastiff interacts poorly with children due to the playful nature and screams of children which the Mastiff confuses for aggression. Its territorial nature has a negative effect on the family’s social life since it limits the number of visitors the Mastiff will allow into your home.

There is, therefore, a need to socialize this dog breed so that it can be able to be exposed to different types of people and strangers, it should, however, not come as a surprise when this dog becomes wary of some people because its true nature and instincts can never be completely eliminated.

If a Mastiff dislikes and is wary of certain individuals, you should know that there is a reason for it. Moreover, when taking a Mastiff for walks and strolls, it is advisable to always put him on a leash and use different routes. By using different routes you prevent them from becoming territorial over the route.

The Tibetan Mastiff is not a dog that is suitable for just anybody. It is a dog which requires the right owner and household because it is a difficult dog to breed. Breeders who feel the need to own such a dog must be prepared to socialize the dog from early childhood to adulthood without ceasing. 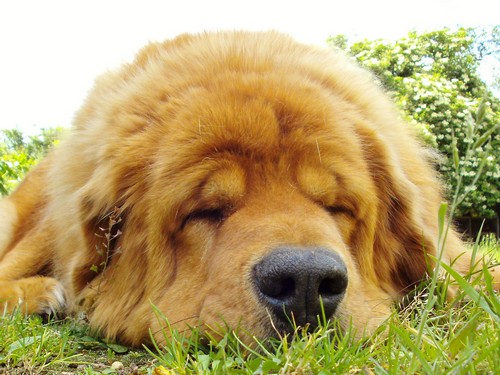 They should also be prepared to tolerate the influence that the dog will have on their social life. Moreover, the dog is not suitable for families with young children. However, the dog is the best dog to have if you really understand its temperament and how to train it. It will not only offer you the perfect companionship but also protection and happiness.