With one of the strongest bites among terrestrial animals, the Tasmanian devil has been perceived to be a ferocious animal, but in real sense it rarely poses any danger to human beings.

Tasmanian devils once roamed in Australia in large numbers, however as a result of hunting and poisoning, their numbers greatly reduced and they now occupy Tasmania in Australia. This was fueled by farmers who blamed the devils for killing their livestock while hunters killed the animal for its fur.

Their number increased again after they acquired a protected species status, but in recent years their population has been dwindling again because of disease. The disease known as Devil Facial Tumor Disease, it is a parasitic cancer that is aggressive, leading to the formation of tumors around the mouth.

The animal is then unable to feed and therefore dies as a result of starvation, organ failure or secondary infection within a period of six months. The main modes of transmission as observed include biting, ingestion of infected carcass or sharing of food.

Hence, there is research that is currently ongoing so as to establish a means through which the disease can be mitigated to prevent it from spreading further. Apart from this disease a large number of Tasmanian devils are also lost due to road kill .

With a lifespan of about 8 years living in the wild, Tasmanian devils live a solitary life and will only come together during the mating season or when they join forces to ensure successful hunting. Interestingly, the Tasmanian devil will consume every part of its prey, including the bones and fur, talk of no wastage, eating 10 percent of their total body weight every day.

Characteristics of the tasmanian devil

Binomial name, Sarcophilus harrisii, the tasmanian devil is about the size of a small dog, covered with a black fur with white spots on the chest or the shoulder, however it is also the largest marsupial that has a strictly carnivorous diet. They have a muscular body and this is probably why they have the energy to be ferocious and act wild especially when threatened. Equipped with a large head and muscular necks, the tasmanian devil has one of the strongest bites for an animal its size.

The devil can grow up to 70 centimeters long and can weigh up to 11 kilograms on average but the size of each devil will vary depending on the availability of food and how much food it consumes as a percentage of its body weight. Compared to its body, it has a relatively large head that houses a strong jaw and sharp teeth.

The name tasmanian devil comes from the animal’s legendary rage. More so when threatened or when fighting either for a mate or a meal, however, they generally avoid contact with human beings and do not pose a great danger unless they feel totally threatened or cornered in which case they can bite, causing significant injury with their sharp teeth and strong jaws. If you have seen the cartoon depicting the tasmanian devil as being wild, then you now know that it’s not far from the truth.

Moreover, apart from their bite, tasmanian devils also release a foul stinking odor to deter other animals and human beings from approaching them. The tasmanian devil has a muscular body and it has great strength enabling it to be able to swim across rivers as well as climb trees.

Although it has great strength, the devil is not very fast and it can run at a speed of 24 kilometers per hour; but it can maintain this speed for up to an hour straight which concludes that it can easily chase its prey to exhaustion. Its front legs are a bit longer than its hind legs.

In terms of habitat, the devil prefers to live along coastal scrublands and forests where it can get shelter easily. One devil will have up to 3 or 4 burrows or caves where it shelters and it will always sleep in them on a rotational basis.

Tasmanian devil is purely a carnivore and gets food through scavenging although they occasionally hunt small animals, fish and birds. The Tasmanian devil is equipped with a strong jaw and sharp teeth and this enables it to crush bones hence it consumes everything from its prey including the bones and fur.

It preys on fish, snakes, birds, insects and small animals. With a ferocious appetite, the devil eats about 4-10% of its total body weight in a day, although this can go up to 40% depending on the availability of food.

Due to its volatile temper, the Tasmanian devil will hunt and scavenge alone, although they occasionally come together to share a meal when the carcass is huge, however even with a huge carcass, fights will still arise during eating. Apart from this, the tasmanian devil lives a life of solitude.

The tail of the Tasmanian devil stores fat just as in other marsupials and this fat is stored for use during periods when food is scarce. As a result of its diet, the Tasmanian devil lives in coastal scrublands where they can also scavenge on fish and other sea creatures which die and are washed to shore.

When eating with other devils, a Tasmanian devil will growl and lunge forward so as to protect its meal and keep other devils at bay.

However, they are nocturnal animals and they scavenge or hunt during the night and late evenings while they spend the day asleep in bushes, caves, hollow logs and in old burrows. 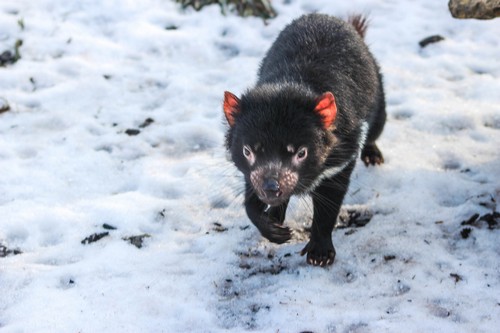 Interestingly, the tasmanian devil will start by eating the digestive parts of a carcass which is the softest part, and once they have created a cavity, they will reside in this cavity as they slowly continue to eat the rest of the carcass, leaving nothing behind, including the fur and bones.

They have a very good sense of smell and they can even sniff buried animals which they dig up and eat and have been known to dig up animals which died and were buried. 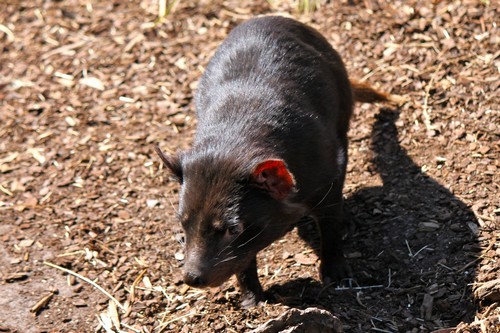 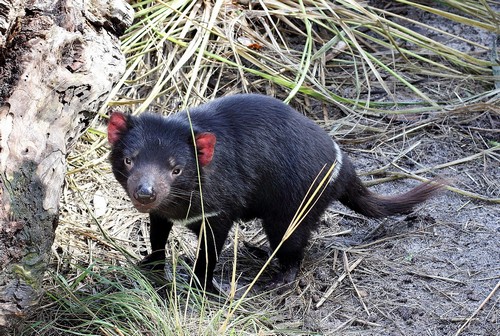 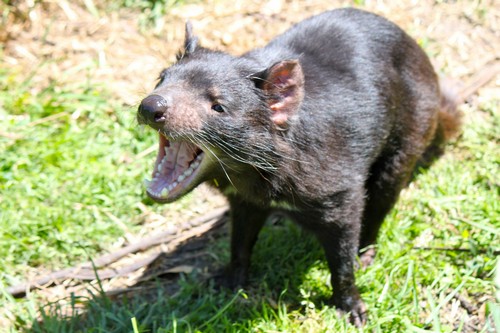 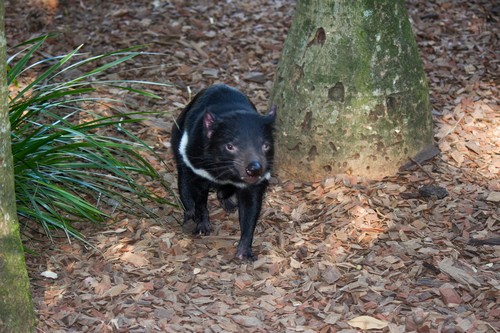 Tasmanian devil mates only once a year, in the period of March when the females are in estrus period.  The estrus period lasts up to three weeks and during this time the males will all be competing so as to have a chance to mate. Just like other animals, they have to fight for mates so as to get the best mate possible.

So as to attract mates, the tasmanian devils will scent mark the ground, trees, bushes and rocks using scent glands that are located near the anus. This scent will attract potential mates and when there are more than one male, they will fight so as to assert domination and the right to mate. The male that wins the fight is the one that will have the right to mate.

The female will mate with the largest and the most dominant male and will even act aggressive to test the male; therefore the male will have to force the female into submission so as to mate. The male will bite the scruff of the female and lead her to his den where mating will take place ranging from a few minutes to one hour.

The female tasmanian devil will be pregnant for a period of about three weeks after which she will give birth to around 30 underdeveloped young ones called imps, although the number can go up to 50 at times. However, the female has only 4 teats in her pouch and therefore the young ones have to crawl into the pouch where they attach themselves onto the teats for suckling. Hence, only four of the imps will survive due to lack of feeding for those that do not make it to the pouch in time, however on average only two or three of the imps survived and they stay attached to the mother’s teats for a period of about three to four months after which they start venturing out of the pouch and into the real world gradually being weaned. 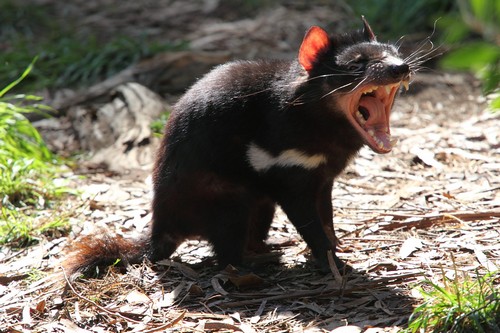 The tasmanian devil imps grow rapidly from birth, developing more features and within 6 months they are completely weaned, therefore when 8 months old they are ready to live on their own, therefore they will leave their mother’s den and go out to roam alone. The tasmanian devil will reach adulthood when two years old, becoming another wild devil ready to be fierce. 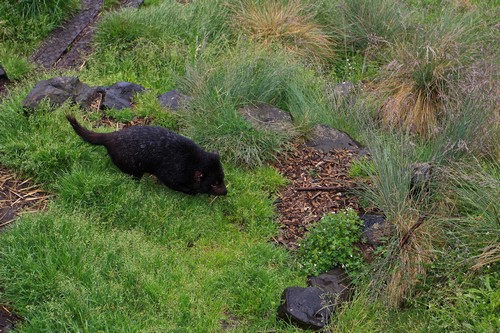 There are roughly about 15,000 up to 50,000 tasmanian devil remaining in the wild. As of now, the conservation status of the Tasmanian Devil is endangered. Their population is continuously decreasing due to a rare cancer as mentioned which is the DFTD – Devil Facial Tumor Disease that is gradually wiping them out.