Spiders are one of the most poisonous and lethal insects mankind has ever seen. There have been hundreds and thousands of casualties due to spider bites.

Today, we are going to gather some interesting, yet mind boggling facts about a member of the large spider family, the Tarantulas!

The Tarantulas have been popularly known to give creep attacks to some people, courtesy of their legs and mostly irritating, large and hairy outlook. In spite of all the demerits it possesses regarding its looks, the tarantulas are not dangerous when it comes to the power of its poison.

These tarantulas are completely harmless, so much that the venom which it transmits during a bite is even weaker and milder when compared to the venom of a typical honey bee!! However, these bites can induce a level of pain in the victim’s body, but it is not a matter of grave danger.

Now a days, these tarantulas are finding their places among the arachnid loving people who are very fondly keeping them as pets for mere display and showcasing purpose.

The tarantulas have a very exciting feature when it comes to their skeletons. They have a peculiar tendency of shedding their outermost skeletons periodically, in a process generally termed as Molting.

It is very peculiar in the sense that they do not only shed their skeletons, but they also replace other internal body parts, for example the stomach’s inner lining, mating organs among the females and are even found to have regrown their lost or seriously damaged body parts.

Till date, in excess of 100 species of the tarantula spiders have been discovered. The tropical as well as the subtropical and arid regions are the environments and habitats in which these spiders are found the most.

In accordance with their varied habitats and environments, the tarantulas too vary their characteristics including their body color and other behaviors. But, commonly is has been discovered that these tarantulas tend to live in shallow burrows which it digs in the grounds.

It has been found out that these tarantulas are very lazy and slow moving organisms and generally they are sort of deliberate movers, however these traits don’t hinder with their hunting capabilities.

These tarantulas are one of the most lethal and accomplished predators mostly active during the night time.

Talking about prey, insects are their favorites. But that does not mean that they don’t go further for the bigger animals. It has been found out that occasionally , these tarantulas also attack and feed on other animals much larger its size such as the frogs, mice and other similar animals.

The most eye catching of all these species is the South American tarantula. The specialty of this species of tarantula is that this lethal spider is totally capable of hunting down small bird and feeding upon them.

But, although they do not spin webs to catch their prey, these tarantulas usually spin their webs in order to create an emergency alarm signal which informs these creatures if any enemy is coming towards their burrows.

These tarantulas are also able to secrete some kind of digestive juices which liquefies the entire body of the prey and enables the tarantula to suck them completely through the straw-shaped mouth endings. After an expansive supper, these tarantulas will not have to eat for a month or longer.

Like every other living organism, these tarantulas are also blessed with some natural foes.

One of these is the Pepsis wasps, which are actually parasites. These wasps are very dangerous for a tarantula. It has been seen that these parasitic wasps bite the tarantula and paralyzes it. As soon as the tarantula gets paralyzed, these wasps lay their eggs on the tarantula’s body and when these eggs finally hatch, the larvae of these wasps gorge on the body of the tarantula which is still alive.

The tarantulas have been found out to have a very exciting mating procedure.

As part of its mating ritual, it all starts as soon as the male counterpart has spun the web. The male tarantula, just after having spun the web, tends to deposit its sperm on the web’s surface.

The male mates with the help of its pedipalps, which are actually the small, leg-like appendages mainly located somewhere near its mouth.

As soon as this gets over, the male tries to run away as quick as he can. This is due to a very peculiar trait of the female partner; the female tarantula has a tendency to eat its male partner just after the mating process.

The female tarantulas have a unique tendency to seal both the eggs and also the sperm inside a cocoon and usually protects and guards it for approximately 6-9 weeks, and by that time, about 600-1000 new tarantulas hatch out of these eggs. 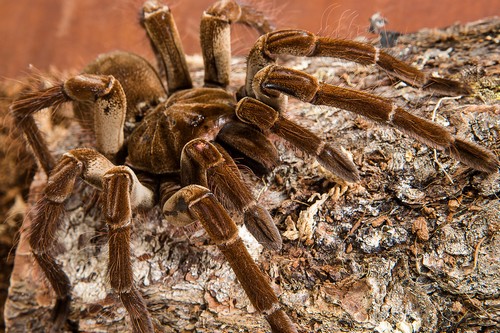 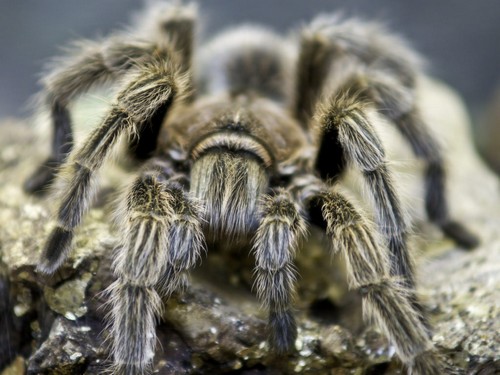 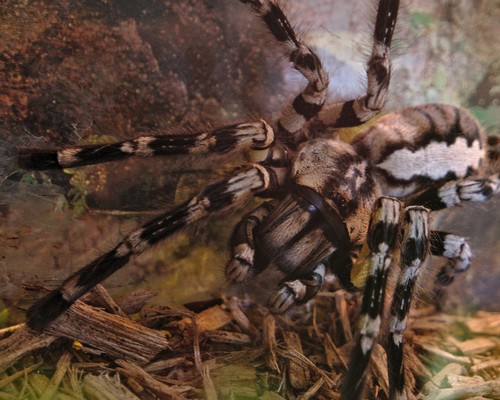 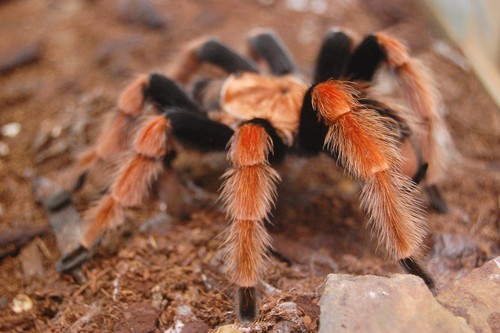 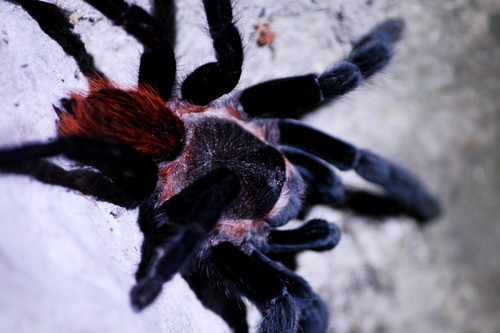 Tarantulas are considered not extinct. Although some species are evaluated as endangered due to over-collection for the pet trade and habitat destruction.

It should always be remembered that the most lethal predator is also a prey for some other creature. This applies to the tarantulas also!.

Though the tarantulas are one of the most lethal predators in its habitat and surroundings, these tarantulas also fall victims to some other more powerful creatures.

Due to such harsh surroundings, the tarantulas are extremely adapted. As a result of its adaptation, the tarantulas have been blessed with a range of protective measures and mechanisms.

The New World tarantulas have a special defensive mechanism in the form of defensive hair, specifically known as the urticating hairs. The specialty of these kind of defensive hairs is that they are able to impart tremendous irritation and pain as soon as any predator comes in contact with these reinforced hairs. As a result, the attacker gets blinded for some amount of time and it gives a plenty of time for the tarantula to escape its attacker and hide. 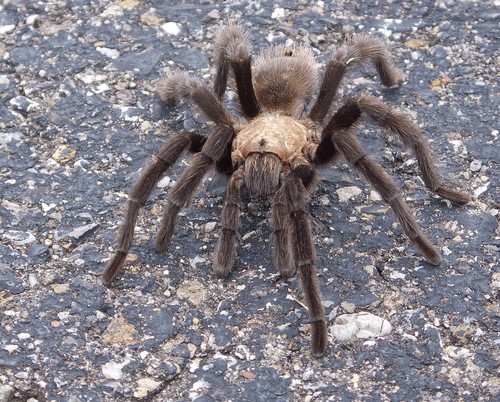 As a measure of self defense, the tarantulas are also able to throw these hairs by slightly shaking and rubbing their bodies, especially the abdomen portion with their legs so that these hairs can also come in contact with an attacker who is at a considerable distance from the tarantula.

There is an equal chance of a tarantula’s attack to be a success or a failure. However, in the case of a failure of its hair attack, the tarantulas tend to run. It may also flip onto their back and expose the deadly fangs. But, after all this if the predator continues to provoke the tarantula, it will resort to attacking maneuver and finally bite its attacker.

Whenever the tarantulas are handled, a few tarantulas discharge urticating hairs that can bring about huge amount of irritation and distress. A few species are also equipped for propelling these hairs at predators with the help of their back legs.

Bites: Dangerous or Not?

The tarantulas are found to possess needle shaped, long fangs.

According to the researchers, it has been discovered that these tarantulas are very mild in terms of behavior and are rarely found to have bite the human population. But this does not mean that they are absolutely careless regarding their self defense.

When it comes to protecting themselves or their off springs, these little creatures can bite at the first visual of a provocation by an attacker or when it is unable to run or escape. 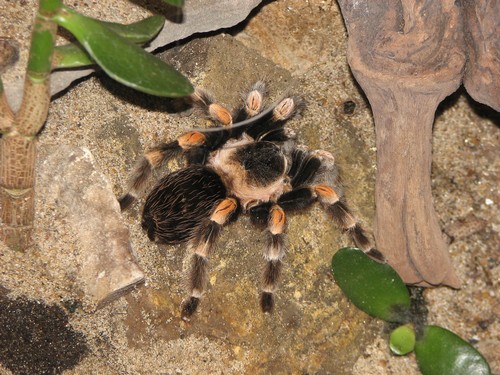 The bite of an average tarantula will merely cause a pain similar to that of a bee’s sting. However, it should be carefully followed that if a particular person is allergic to a tarantula’s venom and gets somehow bitten by the tarantula, there may be serious reactions and concussions. These may include extreme pain, respiratory problems, extreme itching and irritation, sudden increase of heart and pulse rate and tremendous swelling at the area where the tarantula has bitten.