The tapir is a large mammal which resembles a cross between an anteater and a wild pig on first sight. This fascinating animal is believed to have evolved for several years, and has four broad surviving species, the Central American tapirs, the Andean mountain tapirs, the Asian tapirs and the South American tapirs.

They are the largest land mammals in South America, and can weigh up to half the size of a full grown horse.

Tapir is an animal that is closely related to a rhino horse. Because of its short prehensile trunk it resembles a pig. They are the most primitive large animals in the world. Even while been around for 20 million years, they changed very little. The remains of tapir ancestors have been found on every continent except Antarctica. Their name, tapir, originates from the word “tapyra”, which is the name tapirs are called by the Tupi people in Brazil.

Tapirs are very large mammals, weighing between 330 – 700 pounds. They can grow up to 2 meters long, with a shoulder height of about 1.2 meters. They possess a small stubby tail which is usually about 5 to 10 cm long. All of the species have a similar physical appearance, with short legs and neck.

Tapirs possess an extended snout called a proboscis. It is formed from the combined tissues of the nose and the upper lip. This organ is very flexible, and works like the trunk of an elephant, allowing tapirs to move it in all directions. The length of this proboscis varies among the various species, and it is used to grab foliage from low trees and bushes. Due to their hefty size, they can crash through trees to get fruits. With a very large nasal cavity, tapirs have a very high sense of smell, and can detect scents (pheromones) dropped by other tapirs from long distances. They also have a high hearing capability, which compensates for their small myopic eyes.

The largest of the species is the Malayan tapir. It can grow up to 800 pounds (363 kg). The smallest of the tapir is called the Woolly tapir (Kabomani tapir), which weighs about two hundred pounds because of its thick wool coat of black fur or reddish brown.The fur protects it from freezing night-time temperature by giving it warmth.

Tapirs are found in tropical wet climates, and also in swamp and marshy areas. The South American tapir can also live in savannas or tropical forests with a nearby water source. The Asian tapir is the largest specie of tapir, and has a unique white band drawn across its body. It used to be widely distributed across South East Asia, but the numbers have greatly dwindled in recent years due to habitat loss. The smallest specie is the Andean mountain specie, and it prefers to forage in mountain regions.

They can be found on mountains, grassland and rainforest. The Malayan tapir which is the largest species of all tapir is only found in Asian countries like Malaya, Sumatra, Burma and Thailand. Most of the other species of tapirs can be found in Brazil, Paraguay, Mexico, Venezuela and South America. Though they mostly prefer staying in water and river area. Tapirs are good swimmers, and they can spend time underwater, especially when under threat, using their snout for snorkeling, allowing them to breathe in water.

Tapir are herbivorous animals that eat fruits and leaves for survival. They dive into the bottom of watering holes just to eat plants and leaves and in order to do that, they follow the trails made by other tapirs that have gone through the same route. The same way horses use their incisors to bite off grass, so do tapirs bite off grass. They can consume 75 pounds (34 kg) of forage in one night. They like anything salty. They also defecate in water. Their digestive period lasts between 4-23 days.

When a tapir makes a shrill whistling sound, another tapir respond or most of them respond by producing the whistling sound. They also make a hiccup sound which indicates fear of separation from young. Tapirs are territorial animals. They will mark their territories with urine and feces, to warn other tapirs to stay away from their territory.

Male and female tapir reach their sexual maturity stage two years after been born. Their sexual circle (heat period) usually lasts 30 days. Although, it varies in species. When the tapir are on heat they bite one another on flanks/ears. This act is also common in horses and zebras. Their reproduction stage is non-seasonal and after mating the female tapir tends to be aggressive and chases the male tapir. The gestation period lasts for thirteen months. According to San Diego Zoo.org “the female becomes uneasy and agitated and selecting secured birthing area.

Amazingly, they stand up when giving birth and the infant’s head comes out first. Birthing twins is very rare. After birth the female tapir eyes is open and they weigh about 6-11 kilograms. The mother stands for 1-2 hours after birth. The mother licks the infant tapir to keep it clean and encourages the infant to stand. They develop a close relationship with their mother and will remain with the mother till up to a year and half.

Newborn tapirs are born with skin freckled, and they have a slight resemblance with baby deer’s, with stripes and fur. They have patches on their skin, and these patches remain until they reach the age of 6 months. Their lifespan is about 25-30 years.

In as much as tapir mostly live on dry land forest, they spend a good deal of their time in water because they have access to the river areas. They mostly dive into the water to cool off during hot periods. They swim and also feed at the deep bottom of the river when they see any vegetation to eat. They are well known to be submerging themselves in water so that small fish can pick parasites off their bulky bodies.

It is said that mountain tapir of the Andes is more active during the day than other species. They also wallow in the mud pits to keep them free from insects and to keep them cool. They can be extremely shy and hide in water away from predators and threats.

Tapirs make a backward spray of urination and they often urinate in the evening. Tapirs have the ability to copulate under water. They can also walk very quickly at the bottom of water bodies, and it seems like gliding underwater with no friction. They are nocturnal, and are most active between dusk and dawn, foraging in the middle of the night with their keen sense of smell.

They exhibit a very interesting behavior known as Flehmen response. This behavior is also displayed by horses and giraffes, in which the animals curl their upper lip backwards, revealing a pair of sensory ducts in their mouth, which sends signals into a specialized sensory organ known as the Vomeronasal organ. 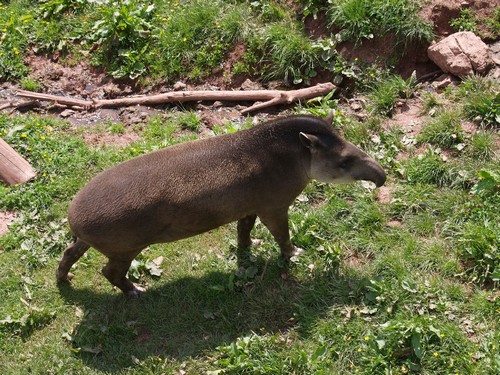 Tapirs play a vital role in dispersion of seeds in the forest. They are travelers, and may change habitat often, travelling from one forest to the other, and in the process eating fruits from one part, and defecating on another part of the forest. By this way, they can change the diversity of the flora of a forest.

Tapirs are solitary animals with the exception of their mating period and the mother’s nursing period. They are known to be shy animals, and rarely assault humans. They may bite you though when surprised or when they have nowhere to escape to. Because of their elusive nature and the fact that they mostly forage at night, Tapirs are very difficult to study in the wild.

Tapirs may look relatively harmless, but a safe distance should always be maintained when you run into one in the wild, especially nursing mothers. They make screeching noises when they get provoked and annoyed, and tourists have been known to lose a finger when attempting to touch a tapir. 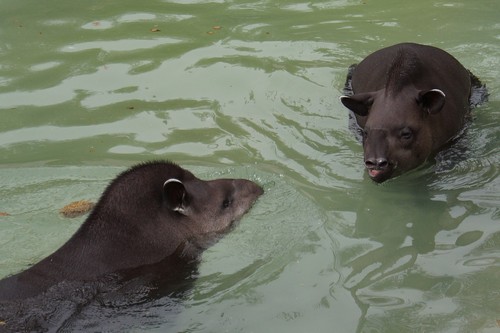 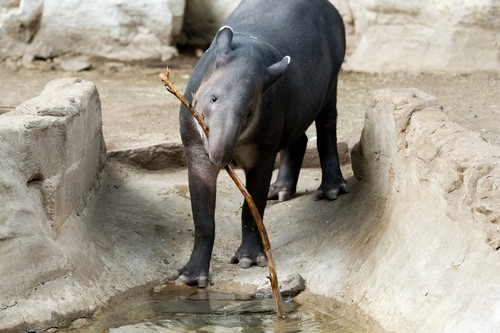 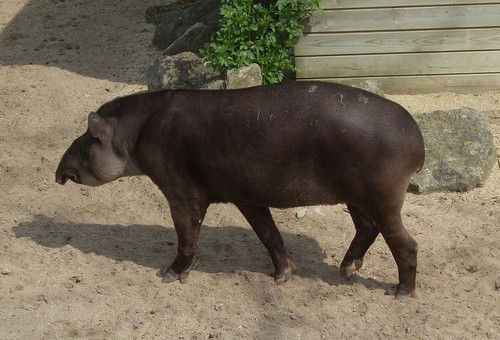 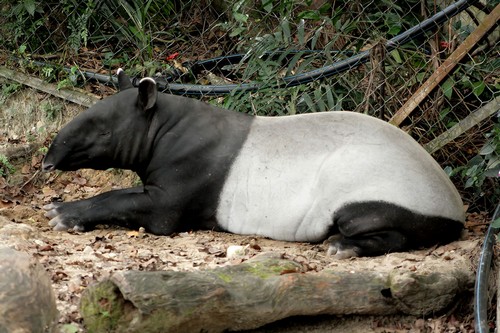 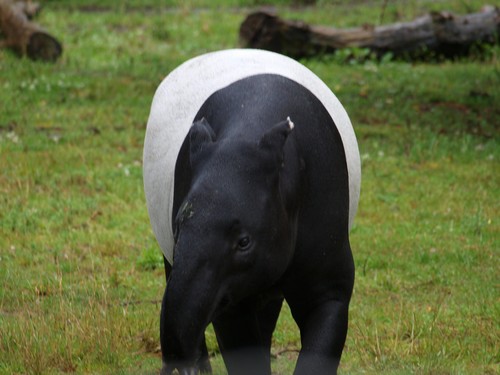 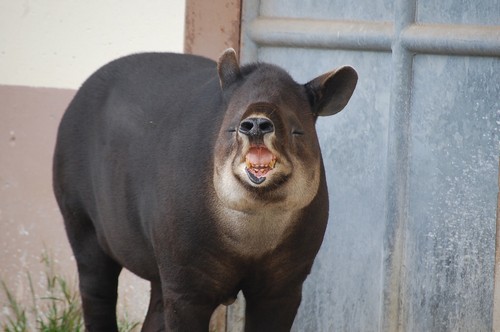 Tapirs are listed as endangered species. Their numbers in the wild has reduced drastically to up to half its population in the last five years. While the Brazilian tapir is decreasing in number due to the increased poaching for its meat and hides, the Asian counterpart is suffering the effects of massive deforestation, which has affected its habitat hugely.

They do not have the defense adaptations like other related animals, such as the horn of the rhino, rather they have a thick skin on the back of their necks which helps to protect them from threats like anacondas, tigers, crocodiles and jaguars.

The woolly tapir is more prone to threats because of its meat, pelts and body parts which are used in traditional folk medicine. There are a number of conservation groups working to aid the fight against illegal hunting of tapirs, and also setting up protected areas where Tapirs can thrive in the wild.