One fact you will agree with is that this animal certainly looks like a character from Dr. Seuss. It is large and muscular, has  the tail of a bear, a nose like that of a moose, a body that resembles that of a bison horns like those of wild beasts. This animal is also called the goat antelope because it shares numerous characteristics with both the antelopes and the goats. However, they are not closely related relatives with either. As a matter of fact, takins are much closer to sheep, especially the Barbary sheep of north Africa, than they are to goats and antelopes.

When it comes to physical characteristics, In the caprinae subfamily, the takin rivals the muskox when it comes to body size and statute. It has fairly short legs that are supported by two toed hooves. The hooves have spurs that are highly developed. It has a deep chest and stocky body. While its head may resemble that of wild beasts because of the horns, taking a closer look shows you that there are many differences. It has  a long nose that is arched. It also has stout horns. At the base, these horns are rigged. They can reach a maximum length of 64cm. the horns in both sexes run parallel to the skull. They then turn upwards. These horns are proximately 30 cm long.

It has a light colors, shaggy, long coat that has a long dark stripe along its back. To distinguish between the males and the females, you can just look at the face. Males have faces that are darker than those of their female counterparts. There are currently for subspecies of the takin. The spies differ both in location and the color pigmentation of their coats. They have very thick wool that serves as protection against the cold. The will turns to a black color at the legs and their undersides.  Overall, their color ranges from reddish brown to blackish to a lighter yellow gray color and a mostly golden. Rarely you will find one or two that are creamy white with few black hairs.

One of the most incredible facts that make this animal a wonder is the fact that its fur decreases and increases with the weather. For instance, during the summer, its hairs are about 3 cm long however during winter the hairs can be as long as 24 cm especially on the underside. This helps keep it warm even if it happens to lie on the snow covered earth.

When standing the takin’s height is between 97 and 140cm. It is between 160 and 220 cm long head to body length. Its tail can be as short as 12 cm or as long as 21.6cm. This is a very heavy species. However, like all animals, its weight varies depending on its geographical location, and its subspecies. Male weigh between 300 and 350 kg while the females weigh between 250 and 300kg. However there have been reported cases of the takin’s weight of up to 600 kg and the largest known female weighing 322 kg.

Unlike goats and antelopes, the takin does not have a scent gland located at a certain part of the body. Instead, it secretes a strong smelling substance all over its body. This substance is oily and is thought to be the reason why they look swollen on the face. Because of their swollen faces, they have been likened to bee stung moose. Their large nose is also an adaptation to its surrounding and habitat. The fact that it is mostly found in areas that are cold, means its body has to find ways to keep itself warm. The nose is large with sinus cavities. These help to make the air inhaled warmer before it gets to the lungs.

The oily secretions on its skin have a salty taste. Other than this, they function as a raincoat during the rainy seasons. Streaks of this oil can be seen when it rubs itself against a tree or rock. Its split hooves are perfect to allow it to move easily in its habitat which is mostly rocky. This oil smells like a combination of musk and a horse.

Takins are usually found in individuals groups of 20. However older males prefer to be alone. During the summer you may find them located at the mountain slopes in large herds of up to 300 individual takins. The main reason that takins gather in groups is because they are attracted to areas where there is plenty of water, food and salt licks. Mating usually happens between July and august. During the mating seasons, males compete for attention through dominance displays. Most of this includes head to head sparring with opponents. Their urine scents are also used by the males to show dominance. After mating has occurred, the female usually gives birth to one young one after a gestation period that lasts eight months.

During the winter, to escape the cold, takins usually migrate from upper pasture areas to lower areas which are more forested. They prefer areas where the sun might hit. Generally these powerful and impressive animals are relaxed and cool. They move slowly when grazing and busking in the sun. They can however act on adrenaline when frightened or angered. When escaping from predators, they can leap from rock to rock. 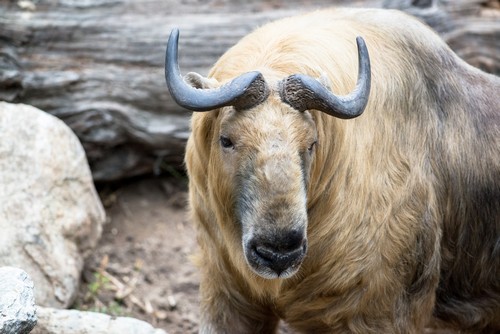 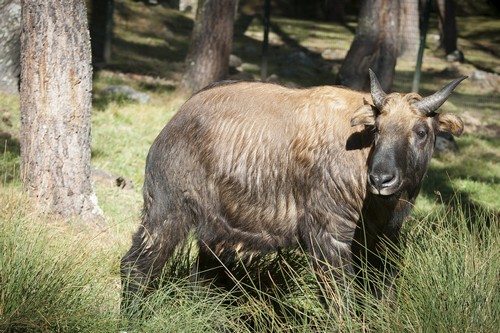 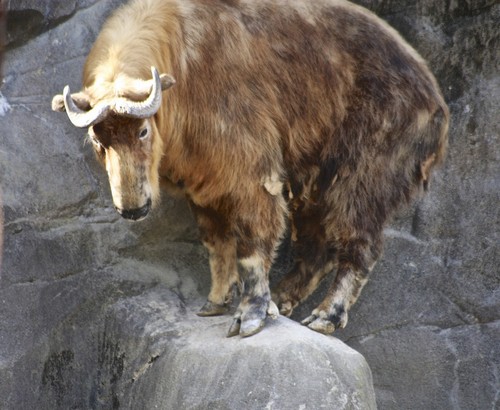 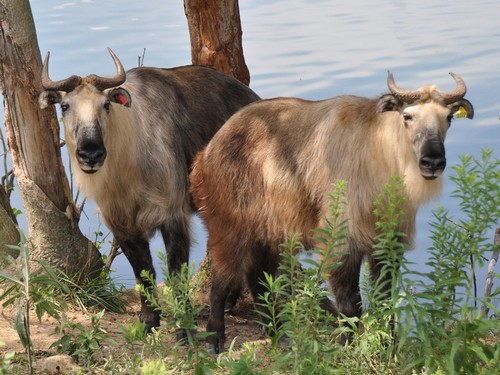 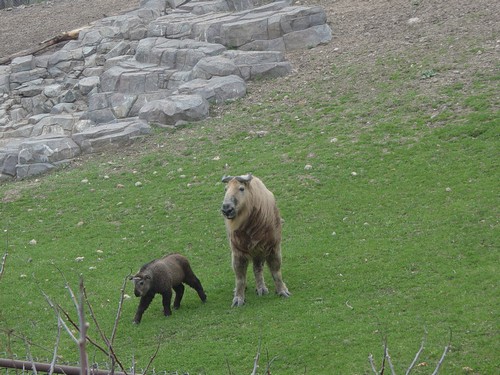 Because they mostly live in groups, when an individual is threatened or senses danger, it will cough. Upon hearing this cough, the herd will retreat into areas with thick bamboos. They will then lie on the ground as a way to camouflage themselves. This usually works perfectly because they have an earthy color and bamboo thickets hide them well. Other than this cough, takins also have an intimidating bellow sound that they produce with their mouth wide open and their tongues sticking out. Watching them you might find this look silly. Do not be fooled. Takins are also called goats with an attitude because they can be aggressive when need be. Their noses also produce a loud whistle or bugle-like notes.  A guttural bellow usually means that the  takin wants something. Their method of communication varies depending on the occasion and what they want to communicate. It is impressive that they understand each other also as much as humans do.  They also communicate with each other using postures like for an instance the male stands erect when showing off to a female during the mating season.

Takins are mainly active late afternoon and early in the morning. Their main diet consists of flowers and bamboo shoots. Like most animals, they stop at nothing to have the food they want. As such, they have been spotted numerous times standing on their hind legs and feeding on leaves that are as high as 10 feet up trees. Salt is a critical part of their diet. They may therefore stay around a mineral deposit for several days consuming the salt after their meals. They move up and down the same paths over and over again. Over time, this creates a series of well-worn paths that lead to their sources of water and mineral salt deposits.

Like sheep and cows, takins are also ruminants. They pass the food they consume into the stomach first when they swallow it.  The very small particles of this food are digested by the rumen. The larger particles then go into the next chamber. The particles in this chamber are regurgitated into cud and taken back to the mouth where it is chewed into smaller pieces that are easy to digest. During the day, takins are found in dense vegetation. They only come out during foggy or cloudy days. If they are not eating, takins are resting. 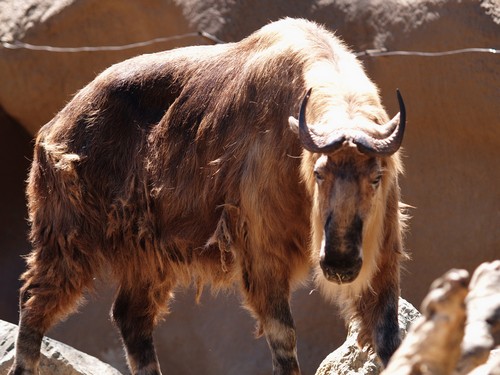 A funny habit they have is that they sleep like dogs with its head extended at the front of its feet.

Just three days after birth, the takin kid can follow its mother through most terrains. This is a very important  characteristic in case the herd is attacked by wild animals such as bears or wolves. It is also important when the herd has to travel long distances looking for food and water. If the kid is separated from its mother during the first two weeks of life, it will produce a sound much like that of a lions cub. The mother will then answer with low guttural calls. The kid then runs back to its mother and they are re united. The kids also have a much darker coat than adults do. This gives them more camouflage as they learn how to deal with the world of predators with whom they share a habitat.  They also have a dark stripe on their back that disappears as they grow older. 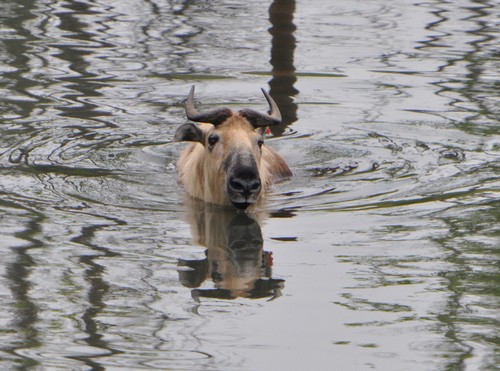 At around two months old, the takins kid stops nursing and begins eating solid foods exclusively. However, this does not mean that it does not have a bond with its mother. In many cases, it will continue to stay close to its mother and she will continue to protect it until her next calf is born.