There are many interesting facts about the sun bear. Being a sun bear it has many things in common with other bears, however there are characteristics that make it unique. For one, the sun bear is the smallest bear in size in the world.

Scientifically, the sun bear is known as Helarctos malayanus, and it is also referred to as the honey bear in some places. This is because the sun bear loves to eat honeycombs as well as honey. Sun bears live up to 25 years of age on average in the wild, however when they are kept in captivity they can live up to over 30 years.

Characteristics of the Sun Bear

The sun bear has a short fur that is actually the shortest amongst all the bear species in the world. Their fur can be either black or brown in color and it has a shiny and glossy look. They do have a unique mark on the chest that is white or orange or yellow in color, however the shape of this mark will vary from bear to bear and it can be circular, crescent shape or have an irregular shape.

The sun bear has a long tongue that is useful for eating honey and insects because it can easily reach into beehives as well as places where insects hide or live. They have ears that are broad at the base and are round in shape. Their ears are not able to move a lot and they make very limited movement. They have claws that are cream in color and their front legs are turned inwards.

Being the smallest bear, they can grow up to one and a half meters in height and can weigh up to 80 kilograms. The male sun bears are larger in size compared to the females. They can be up to 20% larger than the females. Sun bears have relatively large heads compared to their bodies, and the large head has powerful jaws that generate one of the most powerful bite forces amongst animals, in relation to the body size.

Sun bears have large teeth, which are useful in opening up trees so as to get to the honey. Since they do a lot of tree climbing, the sun bears have large claws that provide them with excellent grip thus making them excellent climbers. Their muzzles are short as compared to some bears, and they are lightly colored.

Sun bears live in tropical areas and therefore they do not have the need to hibernate during winter. This may be a reason as to why they have really short fur as compared to other bears. This is because they do not need a lot of fur to provide warmth.

Sun bears live a generally solitary life and they will spend most of their lives alone, except for females who may be seen with their cubs.

All animal populations will have a preference of habitat and even though they may occupy different regions of the world, the habitats of a certain species will have certain factors in common such as climate and other environmental conditions. The sun bears are not any different and they do have their preferred habitat.

Sun bears do not like cold weather and therefore they are mostly found in warm areas that have a tropical climate. Sun bears reside in tropical forests where the temperatures rarely go above 85 degrees at any time in the year, and there is a lot of rain throughout the year with a lot of trees.

They are great climbers and they will therefore be found where the trees are, up the trees or on the ground feeding or resting. Sun bears are found in areas which include Bangladesh, Malaysia, Burma and Cambodia as well as some parts of India especially towards the north. There are some small populations of the sun bears that are found in China as well as Borneo and Vietnam.

Diet of the Sun Bear

Just like other animals Sun Bear have a specific diet that caters for their specific dietary and nutritional needs, the sun bear too has a diet, with certain preferences on what to eat not only for nutrition, but it is also influenced by the availability of food.

Sun bears are omnivorous animals, consuming plants and vegetation as well as meat. Sun bears eat a lot of insects and they do consume ants and termites in large numbers as well as beetle larvae, bees, fruits and figs. They will also eat various shoots and flowers of some plants and they will even use their strong, sharp claws and teeth so as to break apart trees looking for insects.

Interestingly, the sun bear likes honey and will always invade beehives so as to consume honey and honeycombs. Their long tongue comes in handy since it enables the sun bear to reach deep into beehives and lick honey in instances where it is hard to break apart the beehive.

Even though they are omnivorous, it has been observed that they will mainly consume insects and their larvae and will consume vegetation and fruits in little amounts. There are some small animals that are consumed by the sun bears too, and these include small reptiles, birds and their eggs, deer and turtles. They also eat nuts, using their strong jaw power to break open nuts.
The sun bear has a strong sense of smell just as other species of bears, and they will trace scents that they pic, following them until they get to the food.

All animals have a reproductive cycle with some being seasonal while for others it is all year round. Reproduction can be affected by the environment and availability of food, however since the sun bear lives in tropical forests where there is a constant supply of food, the reproduction cycle of the sun bear runs throughout the year. 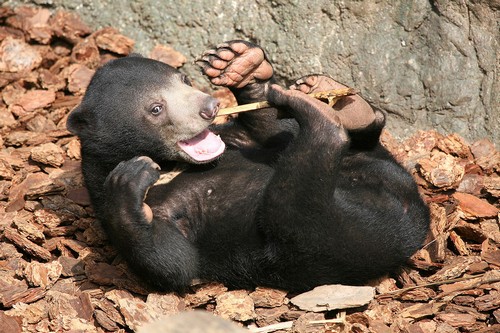 Mating can occur at any time during the year and upon successful mating, the female will be pregnant for a period that varies between 3 to 8 months and this is influenced by the amount of food available for the female to consume during their pregnancy.

The male will normally stay around during the pregnancy so as to assist the female in finding food, finding a good spot to give birth as well as taking care of the cubs.

After the pregnancy, the female sun bear gives birth to one to three cubs however on average only one cub is born. The female will give birth in places where she sleeps such as in hollow trees. 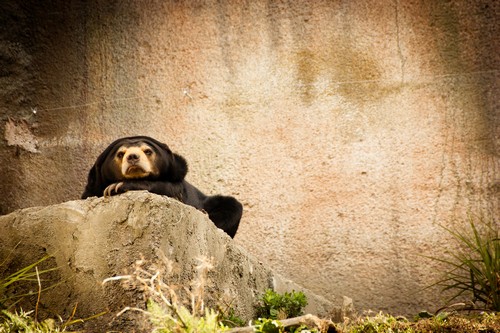 It takes about two years for the cubs to be mature and independent and during this time, the mother sun bear will actively participate in teaching the cubs on the skills that they require so as to be able to survive on their own such as tree climbing and how to break tree barks so as to get to honey. The female will fiercely guard her cubs. 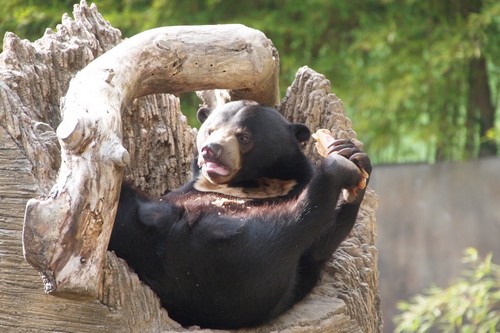 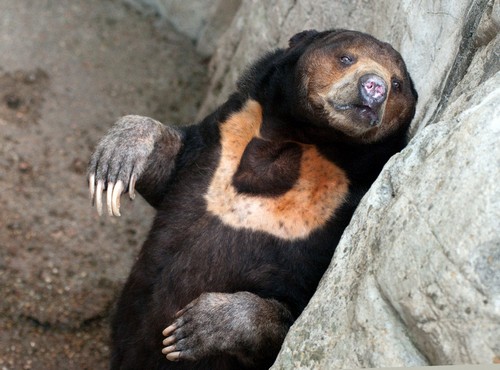 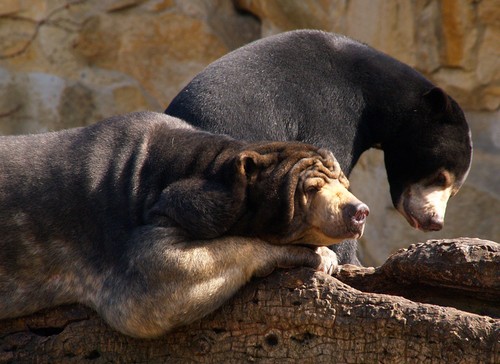 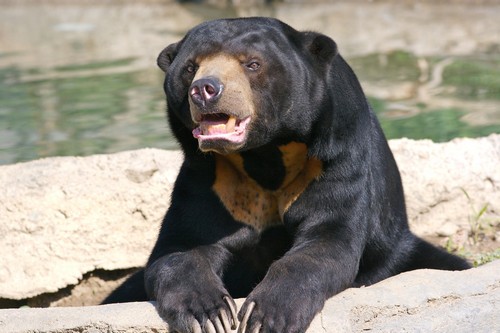 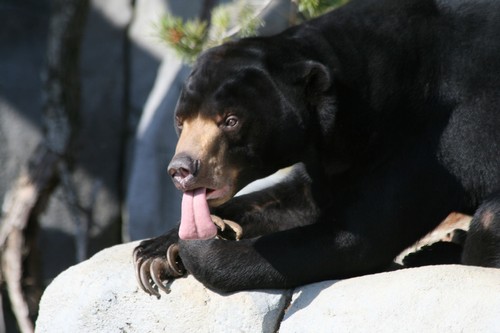 Sun bear populations are spread out in various parts of Asia, however it would be important to note that their population has been on the decline, and the major reason has been loss of habitat. Living in tropical forests, they face a lot of habitat loss, especially due to human activities such as deforestation as a result of industrialization and the clearing of forests for farming.

Another factor that greatly affects their habitat is climate change. With changes in climate, there are changes in the amount of rainfall and this can drastically affect the tropical forests which are areas that normally receive a lot of rainfall.

Sun bears are also threatened by human activities such as hunting. Some will hunt the sun bear for its meat, the skin and some body parts are used for medicinal purposes. Their bile is used as a traditional medicine and this creates a demand, thus leading to illegal hunting. As a result, there is bear farming that is being done to ensure supply of bear bile without reducing their population in the wild.

There are some animals that will prey on the sun bear, such as the tiger, pythons, leopards and other big cats that co-exist with sun bears in the same territory.  To ensure that they are not driven into being endangered, there are various programs that are currently ongoing seeking to protect the sun bear, and they do enjoy protected status.

There is a captive-breeding program run by the Association of Zoos and Aquariums that has been running since 1994. It is listed as vulnerable and it is estimated that over the past few generations, their population has reduced by over 30% and their numbers are still declining.