We all remember fairy tailes from our childhood about stork. Stork is a beautiful bird and we will try to explain here more about storks.

The sight of stork will set a mother’s’ mind running helter-skelter in such of her children (young ones).  The bird is between 2 feet and 5 feet tall. It has long legs, long neck and a long beak. Therefore a mother will be forgiven to think that this bird can confuse her child with one of its preys. Storks move in flocks.  You will only find them in pairs during the breeding period.

There are many species of stork all deferring in their sizes.  We have the hammerkop which is the smallest of them all.  Hammerkop is 2 feet tall and weighs about 1 pound. Hammerkop wingspan is about 3 feet. We have the Marabou stork which is the tallest and the largest of them all.  It is 5 feet tall.  Stork has many species about 17- 21, some are sport white, black, red and others slate gray. The largest stork, Marabou has a wingspan of about 10.5 feet. It weighs about 20 pounds. Stork has long slender legs, long neck and long beak. Marabous’ beak grows throughout its life. These beaks act as a weapon against other scavenger, jackals, and hyenas.

Storks are very beautiful when on flight.   They fly by soaring on current of warm air with their long and broad wings and with out- stretched legs and neck. You cannot confuse the stork with any other bird as they fly because they have their unique way and style of flying.

Certain species of stock have patches on their head and neck that have no feathers.  Since some stork are scavengers it is believed that these patches help when they are feeding on the dead animals not to stuck their head with blood or mud.  These patches on stork’s head and neck become brighter during the breeding period and are used to impress the mates. There is a stork called woolly-necked stork which uses its feather in display.  It puffs its feathers like a ruffed collar around its throat.

With confidence and dignity, the stork walks majestically with its long slender legs. These legs vary in color.  Some are gray, other black and other orange.  These legs help it to walk on long grasses and reeds as it looks for food. On hot weather, these long legs have another important role to play.  They help to cool down the whole body by acting as a radiator.  For example, the marabou will pour urates, that is, a mixture of urine and feces, on its legs.  Because of the hot weather the urates will evaporate and in so doing the blood vessels of the body will cool. These long legs also help the stork to wade in water in search of food.

Storks are found in all continents except in Antarctica.  They are mostly found near water. They make their nests on tall trees, on buildings, on rocks or on the ground depending on the species. These nests are usually built of sticks and grasses. Some nests like those of the larger black necked stork and the jabiru stork are as big as 6 feet in diameter and 3 feet in depth. Maguari storks build their nests on the ground in reed beds. Abdim’s and some other stork build their nests in cliffs and on rocks.

Some species make new nests every year while other species do some repair on the old nest instead of making another one. Some storks expand their nests every year this is the reason why some nests are so big. The hamerkop stork lives in pair.  The male goes out to the field and looks for sticks which he brings to the female.  The female builds the nest. Some nests can be huge, some even more than 9 feet deep and 6 feet deep. The storks are either solitary nesters or colony nesters.

Some species are solitary nesters. These storks live in pairs, a male and a female.  Storks like jabiru, black-necked and storm’s stork form a male and female bond that stays for many years. They stay in nests by themselves and they use the same nests year after year.  They only repair and expand it.

Some species are colony nesters. This is where many storks gather in large numbers.  They share their breeding grounds and nests with storks from different species.  You will find marabou, Abdims, yellow-beaked sharing the same breeding ground and nest with herons and egrets.

Storks live near water and in wetlands. Stork are carnivores in nature.   They eat fish, shellfish, amphibians, small reptiles, frogs and insects. Some big storks catch and eat some mammals like the rodents and moles.  Some Stork feed on snakes and baby alligators. Depending on species, storks vary in their feeding habits.  The marabou storks who are scavengers have sharp-edged beaks which they use to tear meat from carcasses.   Storks like the wood, milky and yellow-beaked which feed on mud water shave sensitive areas on their beak which can feel a prey and they catch it up and feed on it.  Other stork example jabiru and maguari have got a pointed beak used to spot and point out prey in water and tall grass. They get hold of it and feed on it.  Some stork is open-beaked.  These storks have a curved opening in their beak which allows it to eat aquatic snails.

For example during the rainy season the insectivorous Abdim’s storks breed because there is plenty of food. This is the period when the locusts and caterpillars are in large numbers. The marabou storks have their breeding period in the dry season because this is when their favorite food, carrion, from dried pools and water hole is available. During the breeding season stork have a courtship behavior where they do a lot of break clacking as a way of drawing the attention of their mate.

After mating the female stork lay about 3-6 chalky-white eggs.  Both the male and the female incubate the eggs until they hatch.  The young stork chicks are almost naked when they hatch.  They need to constantly eat and so both the male and female go out to look for food and they bring it back every now and then.  The stork chicks grow some feathers slowly by slowly.  After the stork chicks are about three or four weeks they are able to stand and flap their wings.  After two to three months the flight feathers grow and they learn to fly.  They still depend on their parent for food even when they are learning to fly until they are fully able to fly and look for their own food. The young storks are known as gosling.

Some storks build their nests on top of roofs and chimneys.  They use these nests as their breeding ground. 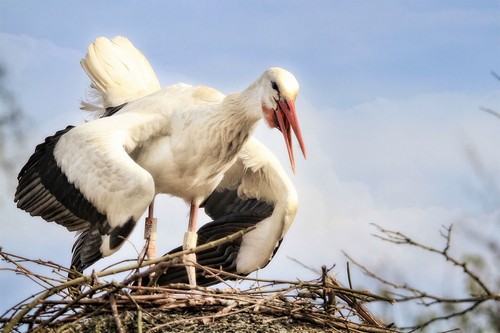 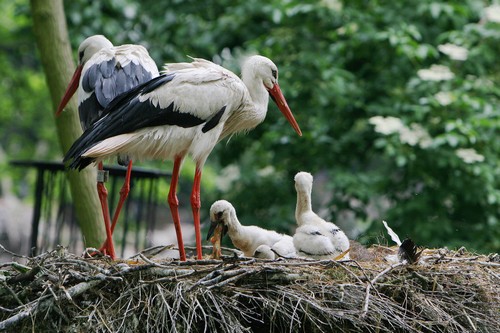 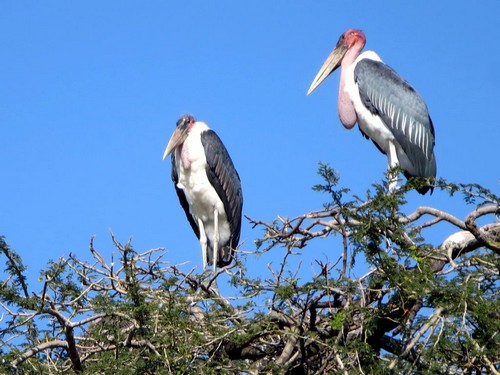 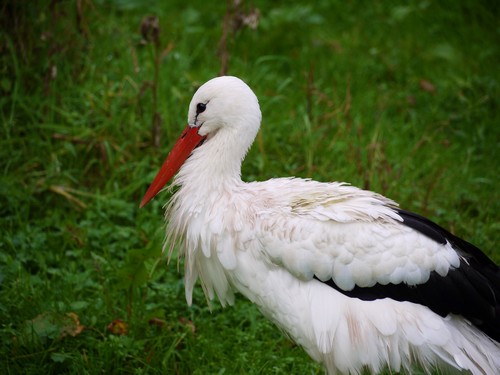 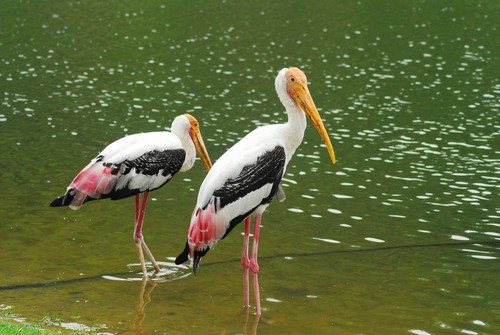 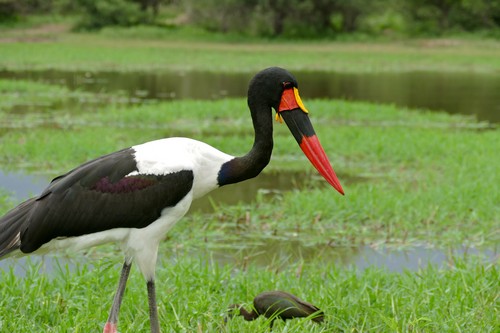 Storks have a long lifespan.  If they are preserved well and strict measures are taken to see that they are not killed by human beings and their habitat is not destroyed these stork can live for between 20 and 30 years.

It was noted that the stork population had greatly decreased.  One of the reasons for the decrease is because of destruction of its habitat.   It was also noted that there was loss of the storks’ food brought about by the use of pesticide. When farmers use pesticides in their farms, most worms and some other insects die leaving them without food.

When people cut trees some species of the stork will not have places to build their nests.  It was also noted that some people were killing these birds, may be for their feathers.  The governments of the countries where stork are found decided to incorporate the stork in the wildlife Act and prohibit anyone from killing this bird.  Deforestation was also prohibited so that these stork birds would have places to build their nests.

Governments of some countries have preserved these stork birds in their zoo and national parks.  This way they are able to monitor them and to care for them more.They are also able to cross breed them.

Storks are very lovely birds. Their size and the physical appearance is enough to attract tourist and in so doing rise the economy of a country.  It is therefore important that these birds are preserved at all cost.  Their habitation should also not be destroyed.  The use of pesticides should also not be encouraged because it destroys some of the prey of these birds like the worms and some insects. Strict measures should be taken by the government of whatever country the stork bird is found so that people should not destroy nests found on chimneys and on roof tops and even worse still destroy the eggs of the stork bird. 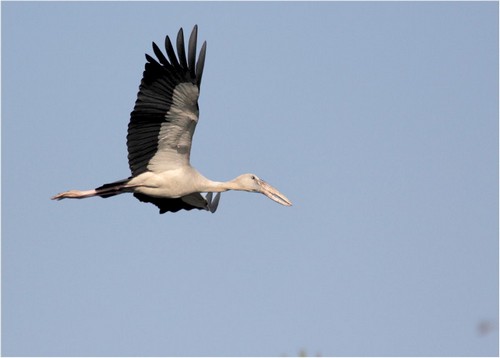