Also called the Ounce, the snow leopard is one of the large cats commonly found in the mountain ranges of south and central Asia. While it may be part of the cat’s lineage, so to speak, it is a very shy animal. When it senses a presence it does not like, it will usually withdraw to avoid unnecessary encounters. It is a solitary animal, shy and reserved. As a result, not very much is actually familiar with this animal. It is not a vicious animal. In some case, it may choose to leave its well earned kill just to avoid a fight with another predator. As such, cases of these animals attacking human beings have never been reported.

The description of the snow Leopard mainly comprises its comparison to other big cats. Unlike other big cats, the snow leopard is slightly smaller in size. They generally weigh anywhere between 27 and 55 kg. The males however can weigh as much as 75kg. Occasionally there is a very tiny female who weighs less than 25kg. They have a short body that is around 75 to 150 cm when measured from the head to the base of the tail. The tail can measure up to 100 cm. They have a shoulder length of 60 cm making them short legged big cats.

They are characterized by beautiful thick and long fur. Their base color will vary from smoky gray to a yellowish tan and whitish under parts. They have rosettes on their bodies whose color ranges from black to dark grey. They also have spots that are either gray or black on their legs, head and tail. Their eyes are either pale green or grey in color. The snow leopards, just as its name suggests, lives in the high mountainous areas where there is a lot of snow and it is constantly cold throughout the year.

It is important to note that scientists in the past thought that snow leopards were not part of the big cats because they did not have any similarities with the leopards although, they have the name. In the recent past, however, it was found that the snow leopard did not evolve alongside the leopards as it was thought. Scientists found that the snow leopard has the same adaptation techniques with the tiger making it part of the big cats.

Because of their habitat, snow leopards have evolved to adapt to their environment. To begin with, they have a stocky body filled with thick and long fur. They also have small and rounded ears. All these features help make their body maximize heat loss. They also have wide paws that help distribute their weight evenly as they walk in the snow. The fur on their undersides is very helpful when they are walking in steep and unstable surfaces. The fur also helps in minimizing the heat loss in the bodies of these animals. Their tail is almost as long as their body while some are even longer than their bodies. The long tail helps this cat to be more flexible. This is an incredible feature given that most of them are found in rocky terrains. The tail is also thick because it is a major fat storage organ in their bodies. It is also filled with fur making it the perfect blanket for their faces when they are sleeping.

The face of the snow lion is also specifically adapted to its environment. It has a dome shaped face and a small muzzle. It also has wide nostrils that allow it to breathe the thin cold air commonly found in the mountainous regions. The nostrils allow the snow leopard to get enough oxygen to its lungs.

Although it has the ossification of the hyoid bone, commonly found in the big cats like the lion, the snow leopard cannot roar. In the past, this ossification was thought to be the reason why big cats can roar. However, it has been found that roaring is as a result of other morphological features which lack in the snow leopard. To communicate, the snow leopard produces sounds such as hissing, mews, chuffing, wailing and growling.

The behavior of the snow leopard is very unique when compared to that of other cats. This animal loves solitude. It thrives where it is alone, except for females who rare their cubs for extended periods of time.  The cubs are reared in dens. Individual snow leopards live well within defined home ranges. The home ranges vary in size. Where the prey is large the home ranges are smaller in size. There can be up to 10 animals every 100 square kilometers. Where the prey is smaller, 1000 square kilometers can only have five cats. Unlike other cats, these ones do not aggressively protect their home range. In fact when encroached, the snow leopard prefers to go away and find a new home rather than fight for the one it already has.

Like all cats, these too, use scent to mark their territories and common travelling paths. To mark its territory, the cat will scratch the ground using its hind feet and dispose scat or urine. It will also spray urine on to rock patches.

These cats are crepuscular meaning that they are most active at dusk and at down. Because their fur close resembles the vegetation and the rocks in the places they inhabit, these animals camouflage well and can be very secretive when hiding or when hunting. It will stalk its prey and only spring up once it is at a distance of between 20 and 50 feet.

They have very strong hind limbs that allow them to spring up to 30 feet when attacking its prey. This length is twice its body length. When hunting, it is therefore easy to confuse it with a leopard of tiger. They have been described numerously as being as silent and as swift as falling snow.

The diet and hunting habits of the snow leopard closely resemble those of other carnivorous animals. Snow leopards, like other cats found in the wild, they are opportunistic feeders  and this means that they will eat any meat they can find whether wild or domestic.  Because they camouflage very well and attack within very short range giving their prey almost no chance to escape, snow leopards can kill animals that are twice or three times their size. Unlike most cats however, snow leopards will eat significant amounts of vegetation like twigs and grass. During the mating season, it is not uncommon to find snow leopards hunting in pairs. 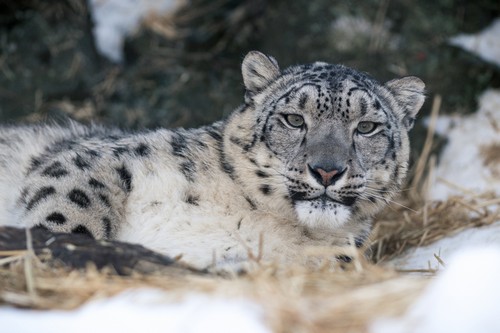 Because of its non-aggressive nature, the snow leopard most of the times prefer to attack its prey from above. It can chase its prey up to 300 feet although in most cases, it will kill its victim instantly.  It bites its prey at the neck and may drag it to a safe location where it will feed on it. It saves its meat and if a victim is large animal it can be a meal for two weeks before it goes out hunting again. 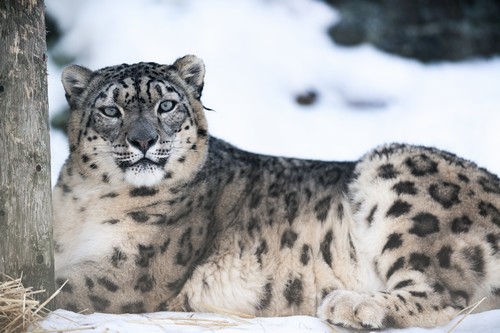 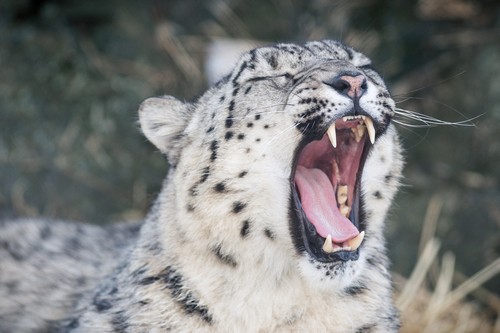 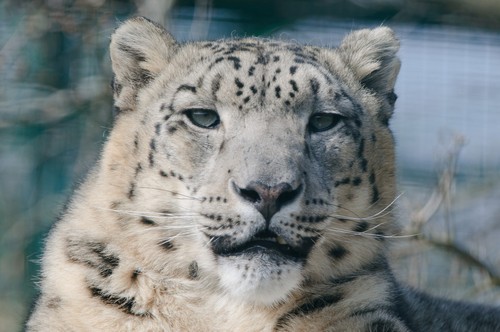 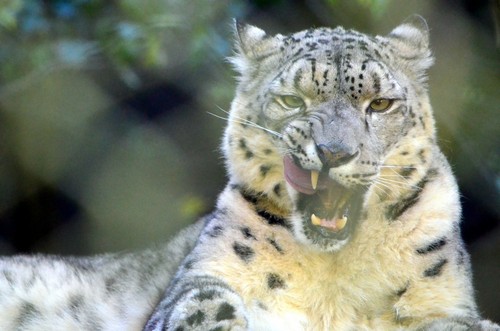 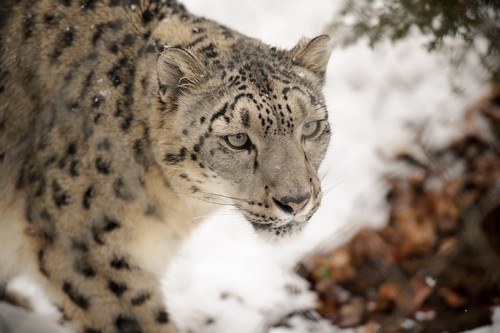 The interaction with human beings 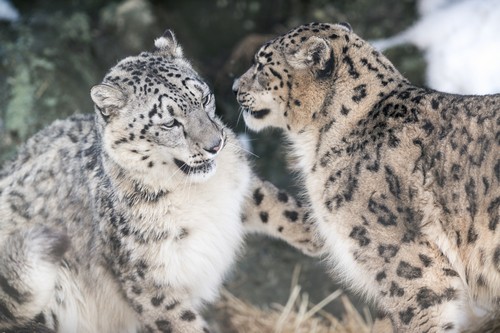 As a result of overgrazing, the animals that would have been food to the snow leopard become scarce. If the snow leopard does not die of starvation, it is killed by the human beings who are trying very hard to keep their animals safe.

However, the snow leopard is reported to be the least aggressive animal to both humans and big cats. If human beings were a bit more forgiving, they would know that it is easy to drive the snow leopard away from their livestock by just shouting at it without killing it. The animal is near extinction given that the number of snow leopards in the world as of 2016 was between 4,080 to 8,700. If not protected, the animal may not even exist in the next 100 years.