Sloths are known to be typically tropical as well as sub-tropical dwelling mammals. These sloths are generally found inhabiting the areas of Central and South American sub-continent. These cute little creatures tend to climb the trees and hang on to the barks and branches with the help of their long and protruding claws. They also eat the leaves of these trees, which they think to be their home.

A quite interesting fact about these sloths is that they are very competitive in nature. It is evident from the fact that these sloths prefer to eat the leaves which are on the topmost part of these trees where other animals of the jungle cannot even reach.

However, every coin has two faces. Although these long and protruding claws help these sloths in numerous ways, they also prove to be a major concern for their movement on land. Courtesy of their long claws, these sloths are unable to move freely on the land and hence have to confine with climbing and hanging on the trees, which they prefer over land.

There are generally two most predominant species of these sloths. They are namely two-toed sloth and the three-toed sloth.

These two-toed sloths are much bigger and stronger than the three-toed ones. Although these two species vary mostly physically, still they have a lot in common among other distinct features. These sloths measure to about the size of a regular sized dog, ranging from 60 to 70 cm and weigh about 9 kilograms.

According to various international societies and research centers, these sloths were not the same size earlier like they are found nowadays. It has been studied that earlier, which accounts up to approximately thousand years ago, these sloths were much larger and heftier than the present-day sloths.

Ancient ones were seen found out to have sizes comparable to that of the present-day elephants. These massive sized sloths were found around the areas of North America; but due to various environmental changes as well as other natural calamities, these giant sloths became extinct at around 10,000 years ago.

SLOW AND STEADY WINS THE RACE!

A hilarious but interesting fact about these sloths is that these sloths are the world’s slowest terrestrial animal. It is evident from the fact that its scientific terminology is Bradypus which in Greek translates out to lazy foot.

According to some leading researchers, these sloths are found out to be so slow and lazy, that algae have been seen growing and propagating on their skin and fur. Although it may seem that these algae may harm these sloths by causing some major physical problems such as infections, etc.; it is not so. These algae turn out to be a blessing for these sloths. Due to the presence of the green algae on their skin, these sloths get an added advantage regarding the prospects of camouflaging.

Because of these algae, the natural color of the sloths vanishes and a coat of the green algae makes the sloths nearly undetectable in the bushes and trees, and hence provides perfect protection against its predators.

These sloths have a mere 25% muscle mass of their entire bodily mass. Such an alarming state may be a cause of concern; but it turns out to be exactly opposite. Such a light weight makes these sloths reach unattainable heights on the trees in search for food. Also, due to such low muscle percentage, these sloths are not able to shiver when they are feeling the chills of the winters in order to warm themselves up.

It works as an advantage that these sloths live in a tropical climate as well being covered in the fur. It becomes very difficult for the female to digest their food if they are feeling cold. And if the female is nursing her young one, then she may have to starve until death. 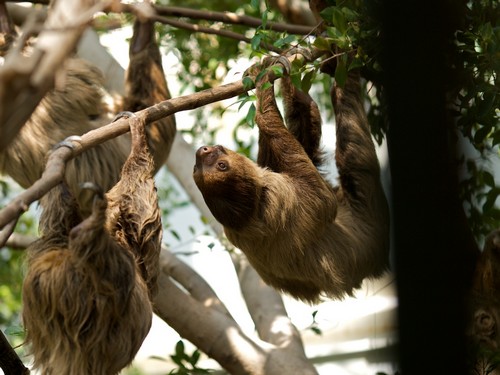 These sloths are generally found dwelling in the lands of Central and South American sub-continents. These sloths are also blessed with the long and protruding claws which they use for various purposes. These claws measure about approximately 9 to 10 cm long.

With the help of these adapted and modified claws, the sloths are easily able to climb up the branches of the trees, but on the other hand also make their time on the land very difficult as these claws hinder the fluent movement of these sloths.

These sloths are very decorated swimmers with the special ability of executing a breaststroke maneuver. They are so enthusiastic for swimming that they tend to jump off the tress in favor of having a swim in the rivers. While sleeping, these cute little creatures are found out to curl itself up like a furry ball in the barks of a tree. 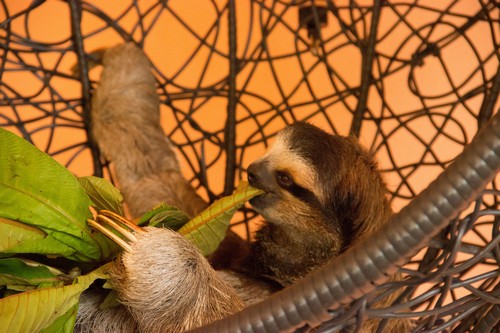 The diet of a sloth depends mainly on this trait of the sloth: its slow-paced movement. This movement speed of the sloth has a major impact on the diet it follows. These sloths feed upon the stems, leaves, buds, flowers, fruits and occasionally on the nectar of the flowers.

Considering its diet, these sloths require a very specialized diet to digest the entire food it consumes. Similar to the cows, these sloths have a typical multi sectioned (4 chambered) stomach. The bacteria which are present in their intestines and stomach helps in digesting and processing the entire meal that the sloth eats which includes huge amount of plants and fruits.

In accordance with the mere nutritional properties of their vegetarian diet, these sloths tend to move at an extremely slow rate and found sleeping most of their time.

These creatures are nocturnal. This is evident from the fact that these sloths tend to sleep at an astonishing rate of around 17-18 hours a day and quietly sneak out during the night hours in search of their food just like a wombat. 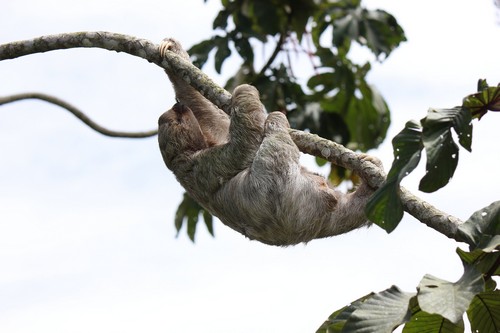 Such a slow metabolism also makes their entire digestive system as well as their innards move at a very slow rate and it has been seen that the food items it consumes may take up to months before they are actually digested. Although the sloth faces some major difficulties due to the slow metabolism, but it also acts as a life saver for them. This slow metabolism ensures that the sloth survive various gruesome injuries which other animals cannot. 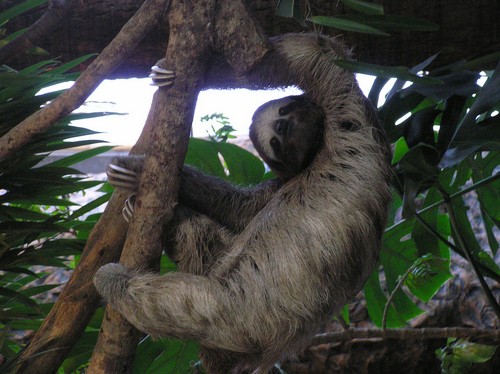 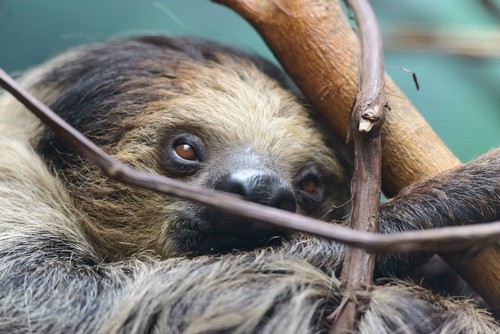 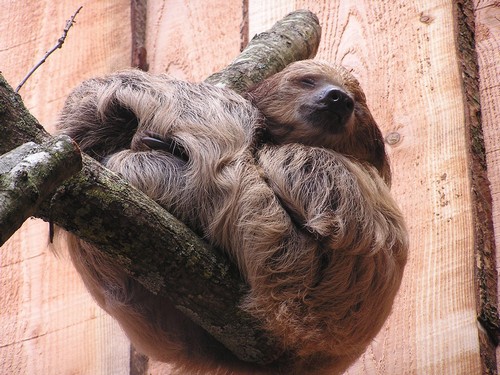 These sloths are ponderous animals and are most likely to remain solitary and alone. An interesting feature regarding the female sloths is the indication it gives out when it is ready for mating. When the females are ready, they let out a shrill nighttime loud scream which lets all the male sloths know that she is ready to breed.

If by any chance, more than one male sloth comes to her, they will have to fight for the right to mate and the one who come out to be the winner will rightfully gain the right to breed with her. After mating, these female sloths give birth to a single baby in a upside down posture. 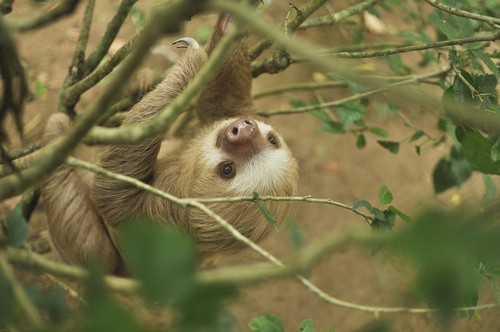 The young one must hold tight to its mum’s hair and has to climb to her mum’s breasts in order to get the required nourishment. The mum’s body posture is perfect for the new one as it rests on its mum’s chest.

After about 10 days of being born, the baby sloth gets its first taste of solid food but still continues to live on its mum’s breast milk for about a month. After this period, the young sloth eats whatever her mother is eating and after 20 to 30 days, this baby sloth also starts hanging upside down on the trees for the first time.