If you have ever heard a big noise across the forests, chances are, you must be listening to Siamang. It is one of the largest Primate. In fact, it’s the largest of the family. Like other Primates, Siamang gibbon has a high developed brain that makes it more unique. Siamang is dark, noisy and large. Therefore, this character makes it different from the other species of the primate family. However, apart from the fact that they are noisy, siamang are known to be very active and early raises. Here are some of the interesting facts about siamang in details.

It’s hard to talk of the physical appearance of siamang and miss to mention that in the gibbon species, siamang are almost twice the size of other gibbons.  Their body is covered with black hair, which is the reason they have a dark shade all over their body. However, although they are covered with hair, their faces are hairless but there is a slightly visible thin mustache. Apart from that, siamangs have white spots on their hands and legs too.

Siamangs are unique in their own significant way. They start their day at dawn and retire an hour before dusk. In the early morning, siamangs produce a melodious sound in the forest, which breaks the silence there. Also, this sound, siamangs uses it to mark their territory from other siamangs. Its also a way of siamang showing love between male and female who are in the same family group.

The largest siamang that has ever grown is up to 1m and 50cm. However, they grow to a range of about 90 cm. Siamangs have large hands that are about 1.5 meters. Their hands are far bigger than their legs. The size of their hands gives them the privilege of reaching to a fruit on the farthest branch on a tree where other gibbons cannot reach.

Siamangs shoulders are made in a way that, when carefree and swinging, they have a great motion range.  Siamangs have strength and power that makes them walk across their range at a speed of about 56 km/ph.

When it’s time for them to rest, siamangs will often retires while on the longest tree around. This helps them since they will not have to keep on watch about anything since being on trees; they have a clear view of everything around. Therefore, predation is not of concern to them.

Its very rare to find siamangs near water banks. This is because they can’t swim. Therefore, they will do anything to ensure they are away from water so as to avoid any chances of falling victims to the water.

Siamangs have a very large gular sac, which can open up to the size of their heads. This gular sac is pouched on their throats and when they inflate, it helps them to make such a loud calling.

Although their diet is concentrated on plants, they love eating young flowers and leaves, ripe fruits and occasionally, they will feed on insects, small vertebrates and bird eggs. Siamangs diet consists of up to 160 different species of plants. Their favorite fruit is the figs. While eating, they are very careful and often peal their fruits carefully to ensure they don’t eat any seeds. However, siamangs are good in regenerating the forest, since they can defecate seeds for a distance of up to 300 meters. The shortest distance they defecate is 47.6 meters. However, they don’t eat old leaves and when eating flowers, they are very selective on what areas to feed on especially on the old ones. Additionally, on the young flowers, siamangs eat the whole part.

Siamang’s behavior is defined more by their body size. They spend up to 50% of their waking time resting. When siamangs are not eating they are resting and the reverse is true. Siamangs, guard their territory by calling early in the morning and later midday. The early morning call is often directed to the neighbors so as to know where they are and how far their territory reaches. The slight midday calling are mostly directed to the family members especially when they are communicating of where they should meet for food.

Siamangs keep their relationships for long. When they are forming a bond, male and female siamangs will spend the first three to four months of their relationship singing to one another to ensure that they have a strong bond. Although even the old relationships are still cemented by singing occasionally. When you listen to the siamang songs, you will realize that it is different from what other species do. They have a vocal variation that makes their music sweet, interesting and complex due to the vocal structure that they have. The male siamang produce the bitonal screams while the female produce long barks. However, both male and female are able to produce the four-vocalization distinct classes (bitonal screams, booms ululating screams and barks).

Siamangs live in a family of four to six. This family consists of an adult male siamang, adult female siamang, infant, and offspring and once in awhile, you will find sub adults in the family. However, the sub adult leaves the family when they reach the age of about 6 to 8 years tobuild their own family. The adult male and female siamangs are the ones that dominate the family. This family group lives in a home range that is about 23 hectares.  However, this range sometimes overlap with other family.


More often, male siamang would be seen chasing another male when they come across their home. This is because they would wish to keep their family safe and have enough food for themselves. Therefore, male siamang is really responsible when it comes to taking care of the entire family more so the infants. 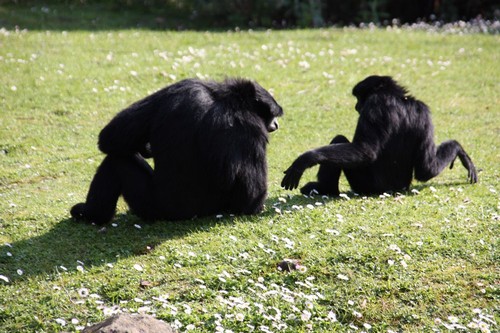 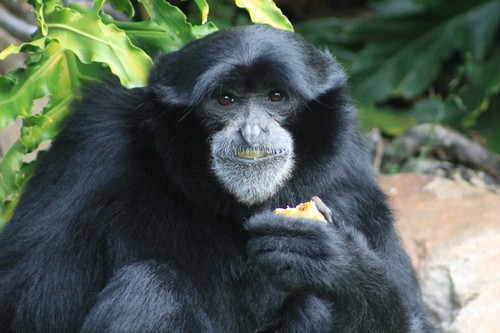 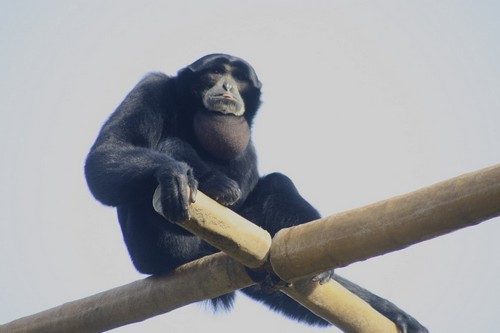 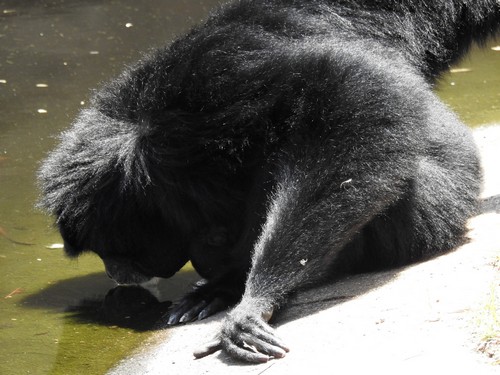 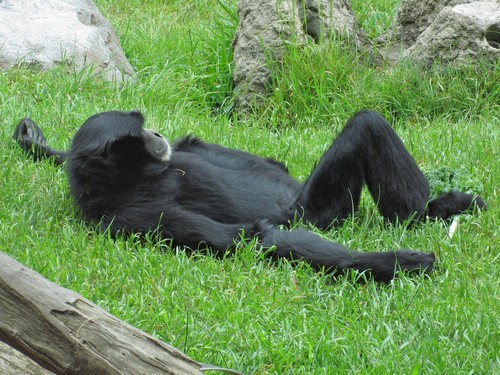 When it comes to mating, siamangs have a similarity that is close to human. There are groups that are monogamous while there are others that are polyandrous. Often mating happens all the time. Although when there are a lot of fruits in the forest, mating gets to its peak. After mating, gestation period last between 7 and 7.5 months. Female siamangs in her lifetime, she gives birth to at least 10 siamangs. The birth difference among the family ranges between two to three years. This period gives the mother time to nurse her young ones better.

When the infants are born they are hairless, but after a short period, it gets covered with hair. During birth, young siamang weighs only 6 ounces. The mother takes care of the young siamang until it reaches 8 months when the father tends to assume responsibility of raising the kid. The relationship between father and kid develops and by this time, the kid only goes back to the mother when it needs nursing. Although in the polyandrous family, infants don’t get this privileges of paternal care.  However, the young ones stay in the shadow of their mother until they reach 3 years old. This is when they can start moving independently in search for food but still in the same home range. 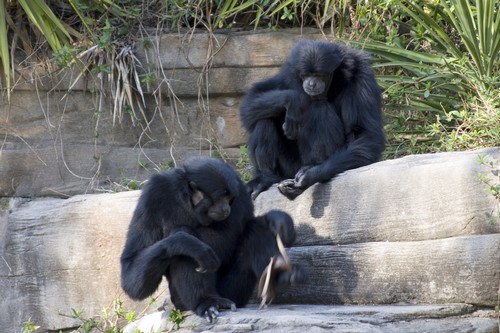 Young siamangs attain maturity when they are between 6 to 8 years. This is when they leave their parents’ home range in search of their own. The female tends to leave home earlier than the male. Siamangs, while in the wild they can live up to 30 years old while in captivity they can live up to their 40s. Although during birth, they weigh less than a cup of water, siamangs when in their maturity can weigh around 14 kilograms.

Siamangs solidly depend on forest for existence. They are arboreal primate. Their main threat focuses on their habitat. These mammals find their habitation on trees. Due to deforestation, they gradually lose their places and this translates as their main threat. Deforestation not only affects the siamangs but also other animals that live in places where there is forest. However, due to this problem, there are laws that are geared towards securing and conserving this species. This law’s function in both local and international levels to ensure that the future of these breed is safe even for the future generation. 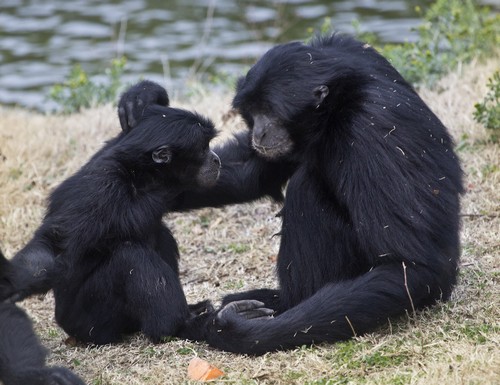 Other threats that this animals face is one imposed by the human directly towards them that is hunting and poaching. However, the main reason for poaching and hunting is for their meat. Poachers and hunters in this business focus on capturing the young siamangs and sell them on illegal home pet trade. For them to capture the young siamang, they are forced to first kill the mother since it’s not easy to get the kid from its mother while she is still alive. They are very protective. Some of this young ones that are captured for the interest of the poacher or the hunter, often die during transportation.