In general, birds are some of the  most admirable creatures in existence. They have a lot of features which make us love them ranging from beautiful plumage, through impressive aerial manoeuvres to fascinating human-like behaviours. In this article, we observe another interesting bird; this time a bird found in the south of Africa.

The Secretary Bird is a huge bird that has been identified with falcons and hawks. This expansive, earthbound flying creature of prey is endemic to the open fields in sub-saharan Africa. The Secretary Bird is acclaimed for being the most popular seal of Sudan and South Africa and shows up on both countries’ crest or coat of arms as many know it to be.

When a bird goes by the name “secretary bird” you would want to think it is as smart as the parrot or has some clerical use to humans, but then, you are wrong. They have no clerical abilities even though they have a somewhat funny relationship with clerks, at least in appearance.

These Secretary birds got their names from the plumes  on the backs of their heads that take after eighteenth century clerical officials. Being that, we are interested in the interesting facts about this bird, and that is what we will do immediately starting with their physical features.

For a bird to be called secretary, what immediately comes to mind is what they look like.  Let us briefly look at the physical feature of this bird.

The world’s most popular birds of prey naturally look fierce, aggressive and dangerous, but the secretary bird believes looking violent is not the way out. The young of the secretary bird has a little head with little eyes and a small nose. Flight wings are usually dark and they have dark quills on the legs and on the back of their heads. Their legs are long and intense and are mostly used for striking and prodding preys.

On the average, secretary birds possess 2 pointed lengthened feathers on their tails which usually stretch out past their feet when they are in flight. They have thick strong scales on their legs to shield their legs from bites that could come from their natural enemies such as snake. Their toes are thick and with short bended claws on their edges. Both male and female are quite similar in appearance.

Every bird has a home, whether temporary or permanent. So in this section, we look at some of the most popular sites this bird makes use of as its natural habitat.

Secretary birds are mostly found in open prairies, steppes and savannas. They live in grasslands where grass is very short so they can see prey more easily as they stroll along. They dexterously build extensive homes in Acacia trees or thistle trees produced using long, flat twigs and grass and can which can be 8 feet wide and 1 foot wide. Homes usually grow bigger step by step. These birds like to come back to their homes before dusk to perch in for the night following a day’s chasing on the ground. Secretary birds, as a rule keep away from woodlands and thick pastures as they may limit their development.

Diet and Nutrition of Secretary Bird

They are well known for their capacity to conquer most lower animals on the African prairies. The secretary bird may go more than 30 kilometers a day looking for snakes, creeping creatures and different animals to feed on. They make meals out of snakes, for example, adders and even cobras however will likewise extend their voracious appetite to reptiles, creatures of land and water, rodents and fowl eggs. Lower creatures such as rodents are eaten entirely, but bigger prey are stamped to death before being eaten.

Tougher preys, for example, snakes, are initially struck to daze them and afterward pecked behind their neck to kill them. The secretary bird is also smart enough to stamp on the ground with its strong feet to forces prey out of hiding in the earth or soil.

Reproduction and life cycle in the secretary bird is almost the same with most other birds. However, there is a little peculiarity in the way they go about copulation raising their young ones.

For them, courtship is an important show of pursuing each other with wings spread up and in reverse just like they perform when pursuing ground preys. Mating happens either on the ground or in their expansive homes up high in Acacia trees. The female can  lays 2  up to 3 light green oval-shaped eggs over a duration of 2 up to 3 days. The eggs, which are mostly ugly, are hatched by the female for 45 – 50 days.

Younger secretary birds have yellow skin covering their bodies. They are usually dependent on parental care from their parents who happily provide the care. The hatchlings can fold their wings at the 60th day and fly around the 80th day. Despite the fact that they stay in the nests far more often than not, they go on hunting trips with their folks who show them hunting tricks and techniques.

This is perhaps the most interesting part of this article. They look elegant, especially when they are ready to kill.

When two secretary birds pair up, they build a family together and mate until one of them dies. Secretary birds are calm most of the time but constantly alert. The main sound they make is a croaking sound when showing off for a mate. 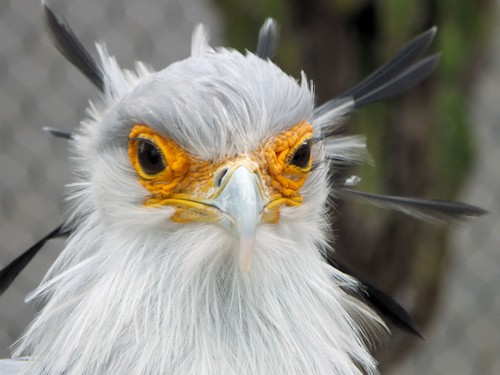 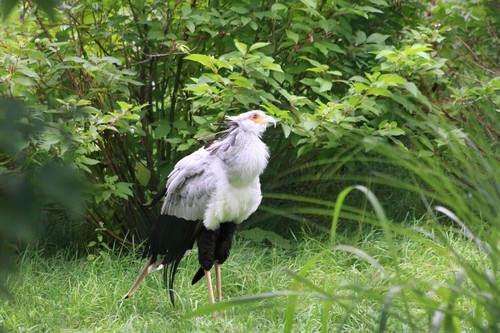 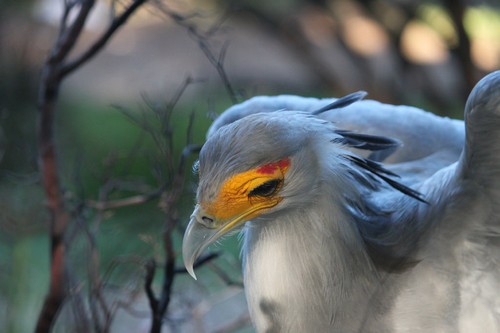 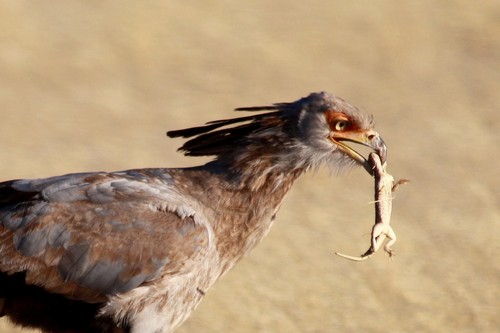 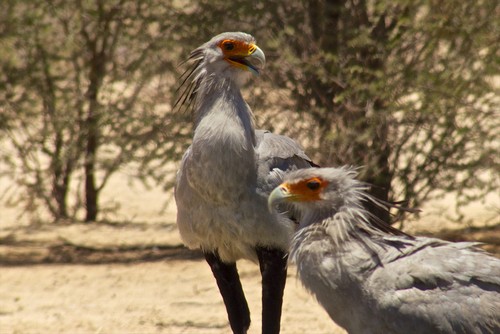 Fact Number 1: They Can reach 5 feet in Height

This is not common among birds. In fact, most birds are of the range of one to two feet length but not the secretary bird. They love to have the best possible view of their environment and they think the best way to achieve this is to be as tall as they can be. And for them, the minimum is 4 to 5 feet in heaight and 5 to 9 ½ pounds of weight. Very impressive for a bird if you asked me.

The upper part of their body is usually dark in colour. The under parts of their bodies and flight feathers are mostly dark. Facial skin is orange-red in complexion, and their beaks have a characteristic pale blue colour. 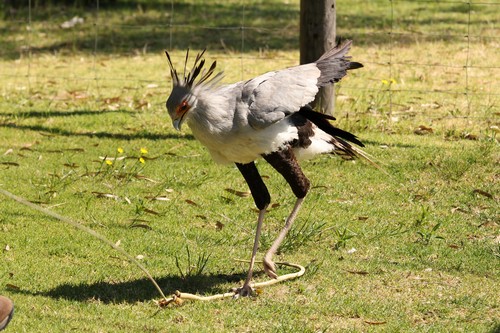 Fact Number 3: They Got Their name from One of Their Features

Fact Number 4: They Have an Incredible Wingspan

If you have read about the American Bald Eagle, you are no doubt used to birds that have great wingspans. However, what may surprise you here is that the bird in question does not have the massive size that is popular among birds with such great wingspans. But then, that is the secretary bird for you.

Secretary birds have wingspans of 7 feet! These birds only fly once in awhile despite the fact that they are capable of hanging in the air for as long as they want. 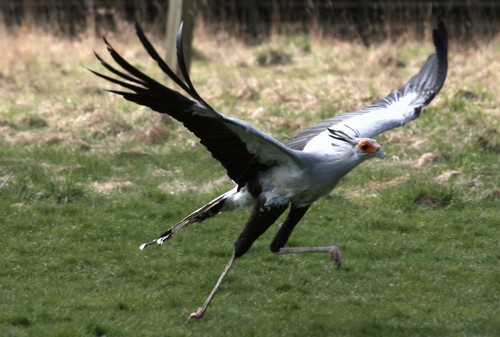 Fact Number 5: They Have Long Legs

There never was a time that the ostrich was without competition from other birds in terms of height. These birds have a pair of long legs encased with thick scales. These scales are useful to it since it treads on paths laden by snakes and other venomous reptiles. Specifically, its leg scales protect it from snake bites.

May be they do not get to live as long as Methuselah in the Christian Holy Bible, but then, they live very long by avian standards. On the average, a secretary birds live for 2 decades and in captivity can live for about 3 decades.

Birds are indeed interesting animals to study and you are sure to get thrilled every time you read about a bird. For the love of birds, even though you need not be an ornithologist, you can hang on to National Geographic’s TV channel more frequently. You could get lucky and your favourite bird gets featured. There are also books strictly on birds which you can get a hold of and catch unlimited fun.