Many birds adorn the face of the earth today. A handful of them are ugly and many are pretty. And when you think about the prettiest birds on earth, do well to remember the scarlet macaw. This bird has one of the most beautiful plumages in all the earth and so great is this beauty that even its somewhat awkward beak becomes a beauty by association.

To begin with, let’s consider the physical features of this interesting creature. Although it has its peculiarities, it is roughly of the same physical appearance with other members of the noble macaw family.

The scarlet macaw, as the name implies has a brilliant scarlet plumage which is sometimes mixed with shades of yellow and /or green. It has a mighty curved beak which it uses to crack nuts. Its tails are thin and quite long compared to the rest of its body.  Although it weighs a meager 2 pounds, it can grow as tall as 30 inches.

Just so you know, the scarlet macaw is a type of parrot. This means that they will always behave like parrots. But then, what do parrots do? They chatter all day, and that is mainly the behavior of a scarlet macaw.

Like most macaws, the scarlet macaw is generally playful, and quite noisy as they play. If you must keep them as pets–just as many people do worldwide–you will have to watch out for your precious furniture and belongings. Their mighty beaks will do the pecking while waiting for your approval.  Additionally, scarlet macaws are noisy creatures that do not care whether your sleeps gets ruined or not so long they catch their fun. It would seem that the only thing bigger than their great beaks are their big talkative mouths. And not only does this bird make animalistic noise, it also imitates human verbal expressions. In a way, it speaks.

Scarlet macaws have quite a simple life cycle. This is perhaps unexpected of one of the world’s biggest talkers. But then, life is full of surprises.

Upon hatching from their eggs, life begins and so does the necessary parental care they need follow. few weeks after hatching, they are ready to fly and months after that, they have started selecting mates. Once a mate is found, the couple stick with each other for the rest of their lives. This means that they can live together for up to 60 years if none dies. Now that’s a whopping 60 Valentine’s Day Celebration for these birds.

carefully read the facts that follow. They contain some of the coolest facts about this bird.

Generally speaking, birds live long. After all, they spend most of their time in higher altitudes far away from the earth’s harshness and close to the freshness that abound up high. But scarlet macaws seem to have taken the whole thing to another new level. They do not think living 10 years is old enough; 20 doesn’t also seem to be satisfactory to these talkative birds. Life which spans 40 years or more is what this bird will settle for unless the unexpected events of nature cut their life short. When in captivity, and then there is enough care, the macaw lives longer than many humans since they have been known to last 80 years.

These birds seem to have realized that their kind is very rare. Perhaps, that is why they have come together and conspired to live in just one location in the whole world. If you live in places other than Costa Rica, there is a great chance that that scarlet-plumed bird you have seen is not a scarlet macaw. May be they were more equally distributed in the past. We wouldn’t know. But what we know is that they are native to Costa Rica. Visit there if you want to see them.

Facts #3: Its Beauty Lies in its Appearance

Quite frankly, there isn’t much to this bird than its impressive plumage. Like you have earlier read, it has a huge curved beak which points downwards. Although they are predominantly scarlet, they often have a blend of green, yellow and white which make them glow even more.

The near awful beak that connects to the scarlet macaw’s head is by no means useless, neither did it get there by chance. Nature armed this bird with this powerful beak for two main reasons. First, it uses the beak to crack nuts as it feeds daily. Secondly and very interestingly, it uses this beak to deal brutal blows to predators who wouldn’t want to mind their business.

All birds chirp and many sing but few can do all of them. The scarlet macaw can produce different types of sounds and at varying pitches. These sounds produced are dependent on the occasion and can be high pitch, low or medium pitch. Scarlet macaws use these vocal signals to communicate with one another and to alert the community in times of danger and panic.

The average scarlet macaw leads a solitary lifestyle. Once in awhile, perhaps when they need to mate or play, they come together. However, shortly after that, they all go their separate ways. This is by no means surprising to many ornithologists. After all, talkative creatures hardly make great friends. 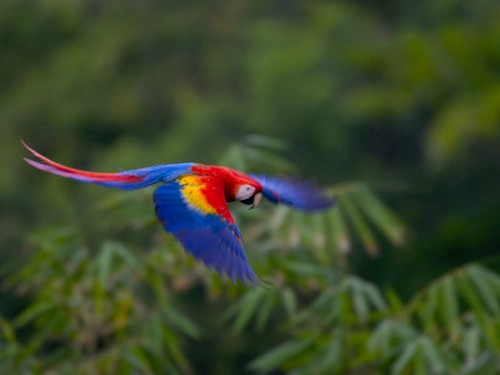 Fact #7: They Can be Very Aggressive

Scarlet macaws can be great friends to humans but for as long as necessary. When provoked, they throw fits of both tantrums and verbal rebellion. For many people who keep this bird, their furniture and clothes are the usual target when the bird loses its smile. If they are unfortunate enough to be holding the big-beaked bird in their hand when the mood swung, their hairs are the targets. So beware. The scarlet macaw has temper issues.

When it comes to food, Scarlet macaws prefer to eat nuts or seeds of plants. It is only natural for them to love nuts since they have beaks strong enough to crack these nuts. And how many sights can be more enthralling than to behold a scarlet macaw cracking away on some hard nuts or seeds on a cool autumn evening. 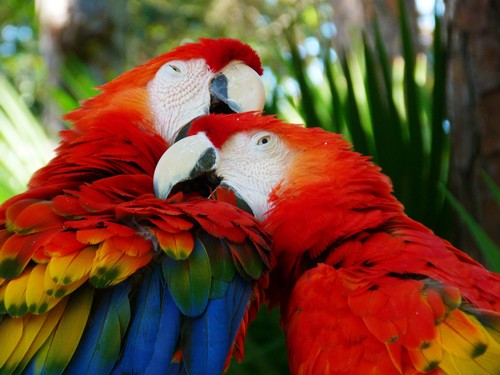 Fact #9: Scarlet Macaws  Are Also Great at the Wooing Game

To attract a female macaw during courtship season, the male scarlet macaw takes its time to vocalize as it calls on the female. When the female arrives, what follows is a systemic but very beautiful dance which is intended to get the female excited. And when the female gets excited enough, they can mate; an activity which leads to the laying of a couple of eggs.

Only 17 species of this beautiful bird exists but that is not the problem. The problem is the fact that all of these species are currently facing extinction. Owing to the persistent attempt of poachers and the gradual destruction of its natural environment, the bird has become endangered, and needs your help to survive.

If these birds can mimic human speech and gestures, then it shouldn’t come as a surprise if they share some common illnesses with human beings. Some of these disease conditions which plague both humans and scarlet macaws include diarrhea, loss of appetite, coughs, swollen eyes among others. 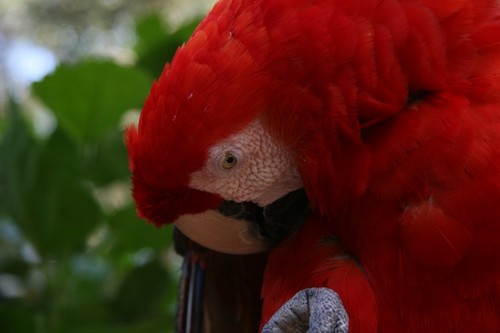 For most birds, exercise comes up once in awhile and as they please. For scarlet macaws, this is an essential daily routine. Upon waking up, the scarlet macaw first stretches its wings, fore and hind limbs, then proceeds to take short flights. Sometimes, it will sprint for a certain distance, and stretch its body severally. It does this to keep fit even as it prepares for the day’s hunt. 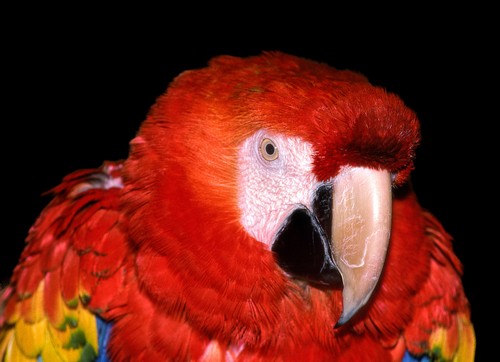 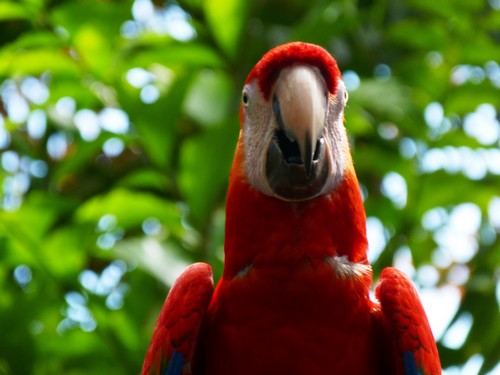 Very clearly, the scarlet macaw is an interesting bird in many ways. Whether you are looking for a more animal confidante or a play thing to love and to hold, or even something to frequently look at, you certainly will find it in the noble-looking scarlet. As you can guess, there’s still a lot of information about macaw, you may read more about it from avian volumes if you are interested in knowing more about it. Viewing related videos both on YouTube and on TV is another great way to catch fun while enjoying one of nature’s many great wonders.