Located in the Caribbean and the tropics of South America, the Scarlet Ibis is not very different from the other Ibis species. This is one bird that is hard to miss. While it may resemble other ibises in shape, it has a brilliant scarlet color that is eye-catching and unmistakable. It is known worldwide as the only shorebird that is completely red in color.  In Tobago and Trinidad, it is one of the two national birds.

Looking at it biologically, the Scarlet Ibis has been found to have the same claws, feathers arrangements, bones and beaks as the American white ibis. The main difference between these two birds is their coloring and pigmentation.  They may have emerged from a crossbreed of the white and the red ibis, a myth that supports the theory that the Scarlet Ibis is in the same family as the American white ibis.  Several birds in the wild are considered hybrids of the scarlet and white ibis. They may have an orange color on their feathers. Some appear to have pale orange feathers while some have a predominantly white color. Breeding between these two birds is most common in captivity that it is in the wild.

Because of its color and its unique structure, it is only natural for people to want to learn as much as they can about this rare bird. While it is not an endangered species, it is one that helps color the wild with inexplicable beauty. If you are in love with bird and love to know all about there, here are several interesting facts about the Scarlet Ibis.

Its physical appearance, much like its name, is scarlet in color. The feathers may have a shade of black or dark blue in larger primaries. The birds are hard to miss because of their luminous quality, red- orange coloring. Its bills and feet are usually red although they may be black or dark blue in some scarlet ibis.  The bill is narrow, long and decurved. It has a long neck and long feet which may appear longer when the bird is flying.

As a young bird, the Scarlet doesn’t begin life with its red-orange color. Instead, juveniles are a mixture or white, gray and brown. It is believed that it develops the scarlet coloring due to its heavy diet of crustaceans. The color changes in the juveniles begin at around the same time they learn to fly. The change doesn’t happen overnight. An observer will notice a small streak of the red-orange color on the back of the bird. Eventually, the color finds its way to the whole body. Over a period of two years, the intensity of the color increases.

As adults, the scarlet ibis attains a length of between 55-63 cm. Its length will depend on a broad range of factors including gender and location. The bird does display a slight sexual dimorphism with the males being slightly bigger than females. Males weight about 1.4 kg while females weigh about 1.1 kg. The bills of the male Scarlet Ibis is about 22% larger than that of the female Scarlet Ibis. Its wings are approximately 54 centimeters long.

It is easy to assume that this bird is not meant for long distance flights because it spends most of its time on foot or wading in the water. However, this is far from the truth. Its long neck and feet extend during its flight making it streamline. Its long wings make these birds adamant flyers. They frequently migrate in search of better food and water sources and thus flying is one of their strongest suits.

They also have long webbed feet, which are perfect for their aquatic existence. Webbed feet allow the bird to walk in water and swamps. They are also able to feel food inside the muddy waters they step on.

During the flight, it is rare to find one or two birds flying by themselves. The Scarlet Ibis enjoys the company of other bird in its species. They therefore frequently fly as a flock of many birds. While in the sky, they form a V formation, which is beautiful to look at.

The v formation is perfect for their long distance flights because it helps reduce wind resistance. The leader is usually at the very form of the V formation. However, when the leader gets tired, they go to the back of the formation, and another Scarlet Bird takes over.

Unlike other birds that live for less than ten years, the lifespan of the scarlet ibis ranges between 16 and 20 years. In the wild, the scarlet ibis’ lifespan is estimated to be 16 years because of factors such as injuries, being hunted by predators and lack of food and water in the habitats they choose. On the other hand, a Scarlet Ibis is captivity can quickly reach a lifespan of 20 years because the critical factors have been eliminated.  One Scarlet Ibis was recorded to have lived up to 31 years, which is long for a bird. 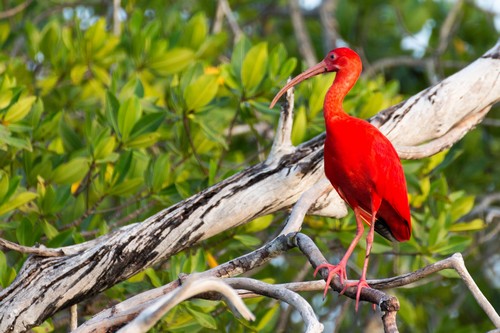 The Scarlet Ibis gets its food by probing under plants and in the sand with its beak. It will survive and thrive of insects, beetles, small fish, shrimp, and amphibians. The bird is thought to enjoy eating shrimp and red shellfish which produces a chemical known as astaxanthin which is a carotenoid responsible for this bird’s color. In captivity, the diet of this beautiful bird is different. Usually, people will feed it on carrots and beetroots to ensure it maintains its vibrant color.  In captivity, people try to find substitutes that also produce astaxanthin. The scarlet ibis is an aggressive bird when it comes to feeding. It will often attack and steal food from other bird species in their habitats. They will often follow larger animals and eat insects disturbed by them.

Scarlet Ibises often exist as a flock of bird. Because they mostly exists in groups, this bird is very sociable. It is one of the most community-minded bird species. The flock usually include about thirty or more birds who stay close together, mate in pairs and have a common goal of protecting young ones and searching for food.

During mating, they will have their nests close to the nests of other birds in their flocks. The colonies will then gather together to form one large colony that acts as protection for the individual colonies, their food, eggs, and young ones. 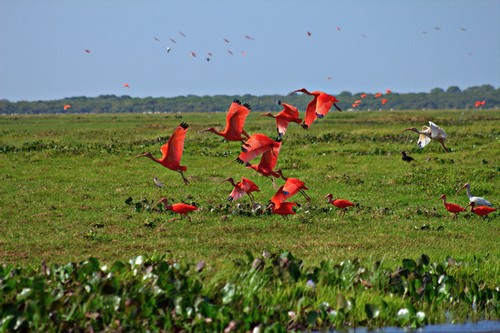 They are community minded and thus do not mind sharing their food and flights patterns with other birds. However, they are very territorials and will aggressively defend their territory and belongings; A good ally for them is one who knows how to mind their own business and keep a distance.

Another typical behavior that is seen amongst the Scarlet Ibis birds is the greeting displays. When they meet, much like human beings, these birds too have a way of saying ‘hi’ to each other. Upon meeting. The birds will be seen making attention seeking movements and sounds. Once they have the attention of their preferred companion, they greet each other in what seems like a hug. They wrap their necks around each other. This is a very genuine gesture amongst the birds. Sometimes, when the gesture is between two birds of opposite sexes, the gesture may be seen as romantic and caring.

The Scarlet Ibis is not a bird that enjoys loud noises and a lot of drama. In fact, it has occasionally been described as quiet and passive. However, when it feels threatened, it will produce loud honking noises to scare away the predator and attract other members of its colony.  During courting, the male will also make honking sounds to attract a female partner. During this time, the females squeal. When hungry, younger scarlet Ibis make a shrill sound. 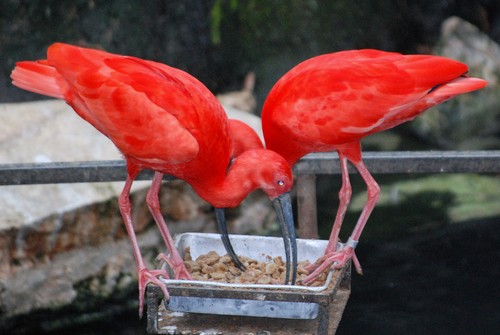 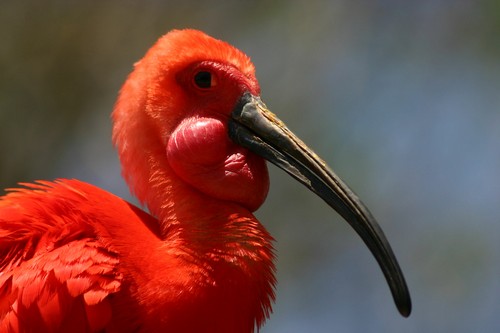 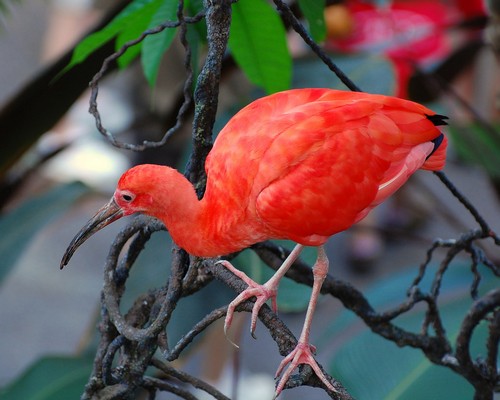 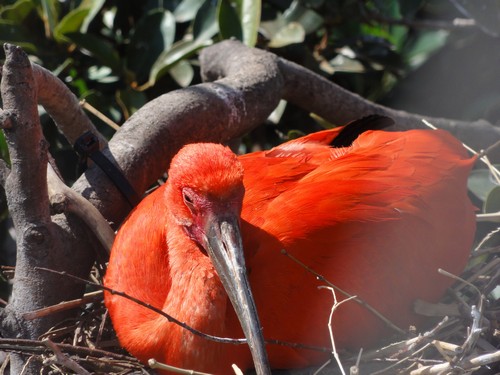 The reproduction of Scarlet Ibis begins when the males perform a broad range of mating rituals. These rituals may include shaping, high flights, preening head rubbing all of which are thought to be attractive to the females. Mating happens as it does with many birds where the male transfers seminal fluids to the female through the cloaca. Gestation usually lasts for about six days. The female will then lay between three to five eggs that are smooth and matte in color. The incubation period for the eggs is 23 days. Unlike most birds, after mating is over, the two stay together through the incubation period and help each other to feed and take care of the young ones. Nests are usually built in areas between dry land and water. Most Scarlet Ibis will prefer to lay their eggs in islands for protection and because there is a high source of food. 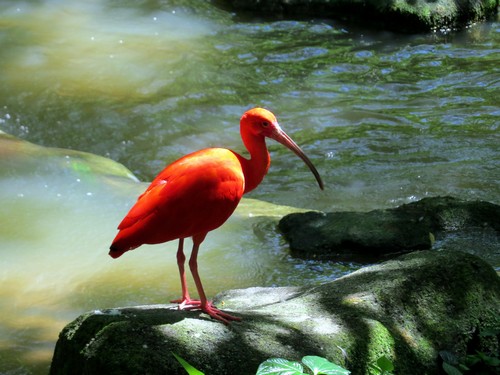 Young birds will reach sexual maturity at the age of two. Females in a colony lay eggs in three waves, November, January and April. Their nests are made from loosely packed twigs and are located on tree tops.