Salamanders are the second largest group of amphibians, although they resemble lizards, they are different from lizards since lizards are reptiles. They have slender, flattened head and body with small eyes and short limbs that project at angles of 90 degrees to the body.

They produce mucus that covers their skin and this makes their skin to be very sensitive and absorbent. Therefore, some of the salamanders are capable of breathing through their skin.

Salamanders are cannibals and one will eat other salamanders that are smaller than it. One of the most interesting abilities of the salamander is the ability to regenerate and replace lost limbs. This has been a great source of knowledge, especially in medicine with scientists looking into how they can emulate this ability and help the human body to be able to regenerate organs.

Due to having absorbent skin, they inhabit areas that have water or are near water; however some species are totally aquatic, living all their lives in water. Some species are poisonous, containing a poison known as tetrodotoxin from their skins. The poisonous species are bright in color as a warning sign of their toxicity and usually move slowly.

According to literature, stories and myth, the salamander is seen as being resistant to fire, and it is supposed that they cannot be harmed by fire, and therefore clothes made from its skin cannot burn.

It is however difficult to establish the salamander population, but their lifespan ranges from 5 to 20 years. They are slow animals; however some species have a top speed of up to 42 kilometers per hour.

With some salamanders being fully aquatic and others need water once in awhile; they mostly reside in wet areas near water sources such as rivers and swamps. They are found in the Holarctic and Neotropical areas; however they do not reach the south of the Mediterranean basin or the Amazon basin in South America.

In Asia, the species found at the North is the Salamandrella keyserlingii, that is found in the forests of Sakha in Siberia.  In North America, the most northern species are the Ambystoma laterale and Taricha granulosa. However, there have been possible fossils discovered in Riversleigh and Murgon in Australia.

About a third of all salamander species are found in North America, although in total there are about 655 species of salamander that are currently alive. There is a large number that inhabits the Appalachian Mountains region where there are vegetation zones that are close to water.

There are species that are able to live on land and are terrestrial and such species have been able to move and occupy larger areas. Examples of such terrestrial salamanders include the northern slimy salamander and the southern gray-cheeked salamander.

Salamanders are predators and are therefore not restricted to specific foods, but are rather opportunistic and will eat whichever food that is available and is within a reasonable size. Large salamanders will prey on larger organisms will smaller ones will prey on smaller organisms.

Smaller salamanders will prey on animals such as earthworms, beetles, leafhoppers and grasshoppers, moths, spiders, mite and other insects. However, the larger species will prey on fish, aquatic insects, small mammals, crabs and other amphibians.

However, when there is a shortage of food, salamanders exhibit cannibalism, with the larger ones eating smaller salamanders although they will target those of a smaller species, with the adults preying on the young ones and larvae.

With their flattened heads, the salamander has small teeth in both jaws even when they are in the larvae stage. The teeth a bicuspid and are adapted to enable the salamander to grasp prey with a partially flexible joint between the bicuspid and pedicel.

This enables the swallowing of prey, even when the prey is struggling to escape. These teeth work together with teeth that are found on the palatine bones found on the roof of the mouth.

The terrestrial salamander will catch its prey by flicking out its tongue that is sticky due to the secretion of mucus by glands found in the mouth. The tongue is then retracted with the prey stuck on its tip.

For aquatic salamander, they catch prey by grasping it with the teeth and tossing the head in different directions while at the same time moving water in and out of its mouth in quick succession and snapping the jaws. All these combined will tear the prey apart, which is then swallowed.

Aquatic salamander will prey or relatively slow moving creatures such as snails, worms and shrimps.

Reproduction is seasonal amongst the salamander with set breeding grounds to which they migrate to every breeding season. The males will set up territories once they arrive at the breeding grounds.

Both sexes look alike and therefore salamanders will use the tactile cues and the olfactory to identify potential mates. They use pheromones in the process of sexual selection, choosing the best mate possible for mating.

Pheromones are produced in the abdominal gland in males while in both sexes; they use the cloacal glands and skin. The male will use the snout so as to scrutinize females.

Fertilization is internal for most of the species, whereby the male will deposit a spermatophore either on the ground or in water depending on whether the salamander is aquatic or terrestrial.

Once the spermatophore has been deposited, the female will pick it up with its vent and this whole process involves various courtship behaviors. The sperms collected are usually stored until the eggs are laid.

There are salamanders such as the Asiatic salamanders and the Giant salamanders that exhibit external fertilization. The male will release sperm on eggs that have already been deposited.

Eggs are either deposited in large numbers in quiet pools, in small batches in hidden and guarded locations in moving water or a small number of eggs laid on land but are well hidden. It is the female salamander that guards the eggs.

The female fire salamander however, will retain the eggs inside her body and they will hatch either as fully formed juveniles or as larvae which are then deposited in water. The larvae are fully aquatic while the tadpole will have external gills so as to breathe under water.

The larval stage may last from a period of a few days to years; however this is dependent on the species. Sometimes the larval stage is skipped, developing directly to a miniature version of the adult. Limbs will develop at the end of the larval stage and the gills, tail fins and other structures not required in adults are lost. 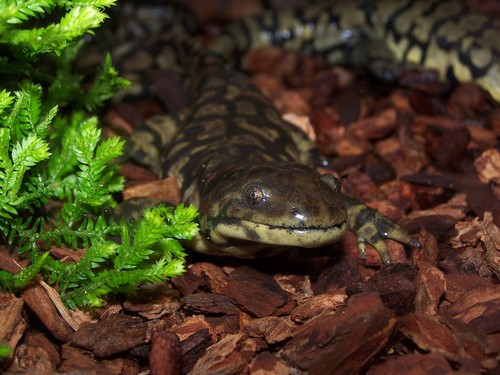 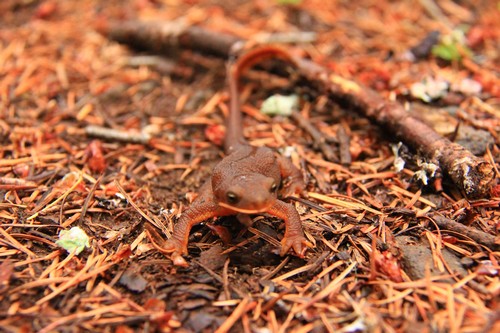 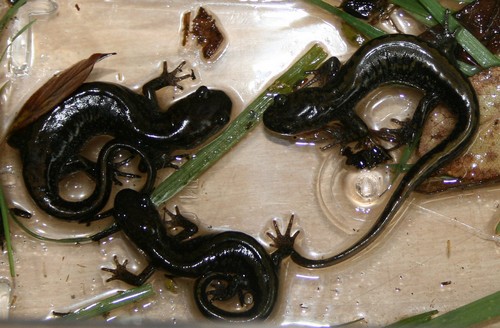 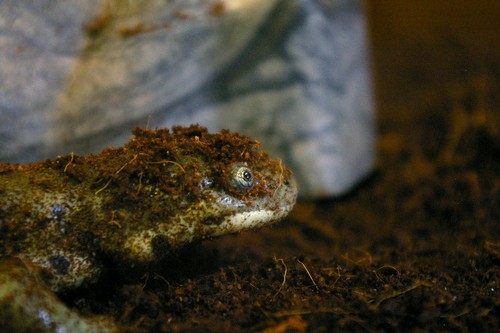 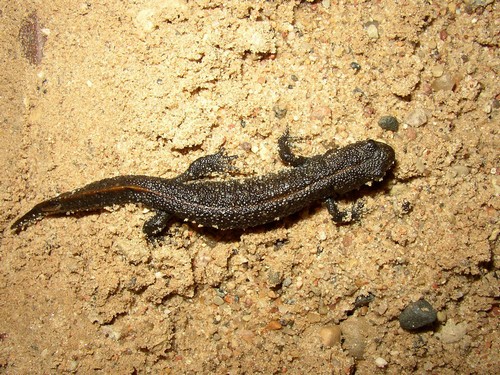 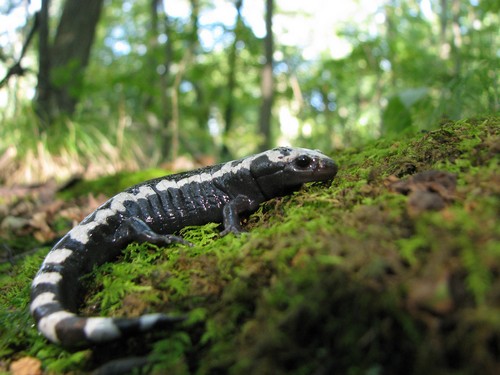 The salamander has various defense mechanisms that it uses to defend itself from predators. The main predators are fish, snakes, birds and other salamanders. With the skin producing mucus, the salamander is covered by a layer of mucus and this makes it slippery and difficult to grasp, therefore it is able to escape when captured by slipping away.

Furthermore, the skin of some species of salamander secretes poison thus helping to put away predators. The poisonous salamanders are brightly colored and this coloration further act to warn potential predators. The fire salamander in particular is able to squirt toxic fluids in the direction of its attacker up to a distance of 80 centimeters.

Salamanders also use mimicry and camouflage so as to avoid predation. They do this by mimicking the poisonous species and therefore predators will avoid them thinking that they too are poisonous. Although this is a great method of avoiding predators, it only works with predators that have already encountered that poisonous species of salamanders first.

Another interesting method of defense that the salamander employs is the use of its autonomy, with the ability to regenerate body parts. When in danger, the salamander will drop off its tail, leaving the tail behind as it wiggles. 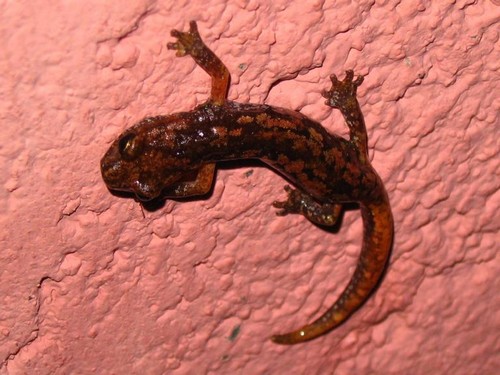 The conservation of the Salamander

Another possible reason for the decline of salamander numbers is deforestation and destruction of their habitats.

Because they are creatures that are sensitive to slight environmental changes and pollution, human activities and global warming play a big role on the reducing numbers. Therefore, there are efforts to conserve environment, especially in areas where the salamander inhabits so as to conserve breeding sites.