In today’s article, we look at one of the most adventurous predators of the air, simply known as the red-tailed hawk. For us humans, this birds is just another of nature’s many glamorous birds in the wild, but for smaller birds, rodents and small reptiles, the red-tailed hawk is the undoing–their doom. This bird is America’s most popular hawk as it is easily sighted in virtually all corners of North America.  Perching carefully on nearby trees or poles or drifting in circles high above the grounds, they inspects their horizon for the slightest indication of the presence of preys.

As expected of a bird named red-tailed hawk, there is a lot of interesting information about it that that are noteworthy. But before reading about the most exciting of these information, it is best to understand the basics. For a start, what does a red-tailed hawk look like?

What physical features can help one to identify a red-tailed hawk? Are they any different from a regular hawk? Let’s see more below.

As one you may have correctly guessed, it has a striking red-colored tail from which it got its name. Its body, however, comes in a number of colors which range from shades of brown to cream. Its dimensions vary from gender to gender. The male red-tailed hawk for instance has a pair of wings which span 50 inches and an average body length of 20 inches while the female measures 23 inches on average for body length and roughly 51 inches from the tip of one wing to the tip of the other.

This particular group of birds has specific adaptations that set them apart from other birds. They have talons, a hooked beak and keen eyesight; all used for catching and killing prey.

Four sharp talons on each foot about 1 1/2 inches (3.8 cm) long help the hawk to kill by piercing and crushing its prey once it is caught.

When it comes to habitat, the red-tailed eagle does not have a problem finding a place to call its home. they are not choosy though they have just one major requirement when it comes to choosing a habitat: space! And after getting enough space, they need more space.

Owing to their need for space, perhaps to facilitate their hunting sprees, open woodlands are unavoidably their favorite habitats. So long there is enough space, red-tailed hawks will manage the place be it savannahs, desert lands, shrublands or fields.  Upon arriving at a favorable habitat, the red-tailed hawk locates a very high tree or cliff or man-made structure, and builds its nest up high. Very clearly, it does this to enable to have a clear view of the surrounding landscape so that it can easily spot and strike a moving prey several meters away.

Red-tailed hawks are unrepentant carnivores. They do not live high in the sky because they love to be closer to their creator, neither do they hover the sky in circles because they are military drones attempting to prevent enemy strike. Each time they hover in the sky, a rat or mouse–the main components of its diet–goes down the hard way.

Their targets are relatively smaller creatures which are usually abundant in their chosen habitat. Examples include woodland rats, lizards, rabbits, voles and sometimes, squirrels. Every agile and ready to pounce on unsuspecting preys, the red-tailed eagle has the uncommon ability to lift and fly away with a 5-pound prey.

In this section of this article, you read some rare facts about red-tailed hawks. And while you may already be familiar with some, watch out for the rare interesting facts that will blow your mind.

Fact #1: They Are Aerial Devils!
When it comes to acrobatic displays in mid air, red-tailed hawks seem to be very comfortable with risking their lives in the process. Often times observers get to see two of these birds put on an exciting aerial display which sees them fly around each other in close circles. The male specie will dive towards the ground at an incredibly steep angles only to abruptly change course upwards somewhere along the line at an equally steep angle. And when this craziness really gets a strong hold of them, they cling madly to each other as they fall downwards; detaching and flying to safety just a few feet away from hitting the ground.

Fact #2: They Hunt in Pairs
These birds obviously understand that two good heads are better than one. That is perhaps the reason they hunt together in pairs. On a good day, two red-tailed hawks would perch on the same tree branch but face opposite directions. From their positions, they would scout for any trace of preys such as rodents, and when any is sighted, one or both of them would launch towards it at a deadly speed.

Fact #3: They Live Pretty Long Lives
What more can one expect from an animal such as the red-tailed hawk who spends a lot of time enjoying the fresh breeze of nature high in the air? Researchers once banded one of this birds sometime in 1981 in Michigan, only to sight it roughly 32 years later. This proves that not only do they live long, but somehow, they manage to know their homes especially the ones in which they were born.


Fact #4: They Mate For Life
If you are conversant with the mating characteristics of many birds, you will no doubt find this act a common occurrence among raptors. When two adult red-tailed hawks mate for the first time, they stick together and mate for life. In reality, it is only death that separates the two of them after their initial bonding. 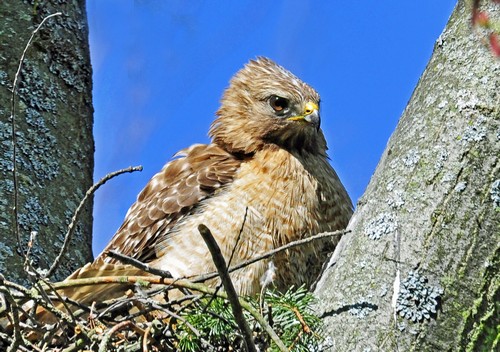 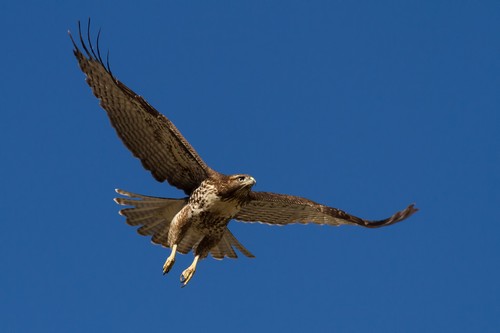 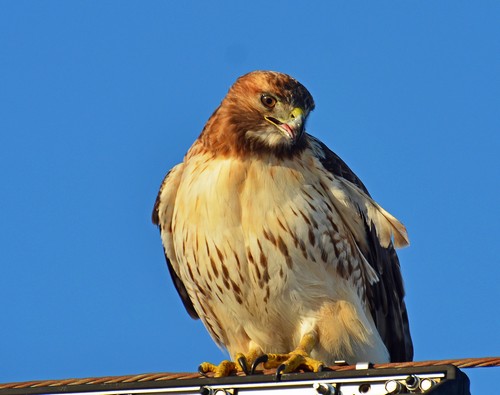 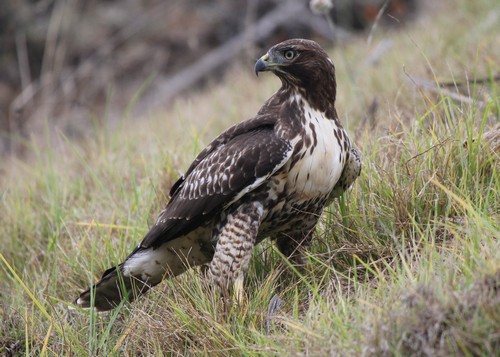 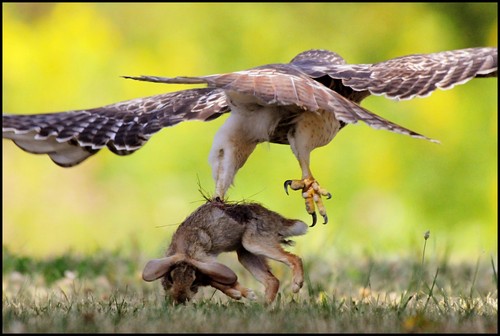 Fact #5: Used to be an Endangered Specie
A few decades ago, this bird was listed as one of the endangered species  which needs to be closely watched if they must escape extinction. However, just recently, they have experienced an amazing increase in numbers as passers-by often see in the skies of North America. But then, to ensure that the bird continues to enjoy its freedom, the act which protects migratory birds in the United States still covers it.

Fact #6: Has Formidable Foes
Surprisingly, this bird has a number of dangerous foes which no bird would envy. From the horned owl, the red fox, and from the golden eagle to the intelligent racoon, the red-tailed eagle remains a target to bigger preys who believe it is right to dish to the bird, the same justice it dishes to rodents. However, being the smart aerial specialists they are, they build their nests very high in the air and only on well-secured spots. From there, they unleash hell for decades before their natural death.


Fact #7: They Eat Snakes Too
Red tailed hawks are known to make meals out of smaller animals which are mainly rodents. What is perhaps not well-known is the fact that these raptors also hunt and eat small snakes. On sighting one from a distance, they launch downwards toward it, clawing and stabbing away with their beaks. And when they are extremely hungry, they are known to vent their fury on domestic cats and other smaller pets. So much guts for a relatively small bird you may say. 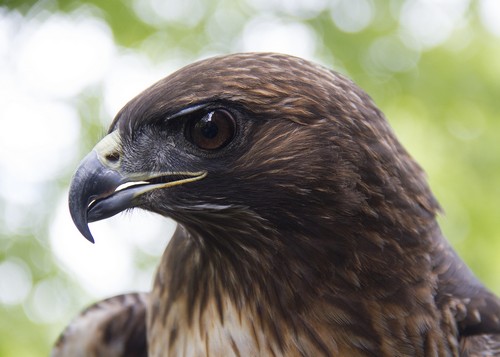 Fact #8: They Are Sacred in Native American Cultures
Some Native American tribes do not see the red-tailed hawk in the same light as other people do. To them, these birds have a link with their culture and ancestors. While many would link them to some purported ancestral spirits which protect the people, other simply admire and respect the bird for its role in shaping the fauna of the North American clime.

Fact #9: They Are Really Vocal
The Red-tailed hawk is an excellent noisemaker whose trademark scream has earned it some popularity in Hollywood cinema. Depending on their mood and activity, they make various kinds of noise as they try to show excitement, boredom, anger, fear, hunger, and, of course, toward off intruders.

Fact #10: They Have an Amazing Eyesight
How else would these birds be able to spot tiny creatures in the grasses several meters away if they do not have very keen eyesight? If you remember correctly; they dwell in nests which a placed very high on tall trees or cliffs. So, it was only natural for them to develop great eyes that are adapted to seeing their targets from great distances. Reports indicate that red-tailed hawks can see preys at least a 100 feet away from them. And in most cases, when they strike, their preys are usually unaware of the impending doom until they are just a few feet away. 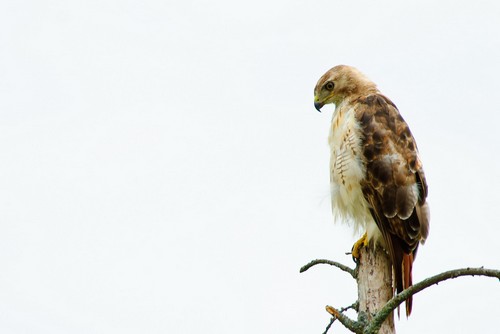 Impressive as these birds seem, they have a hard time growing into adulthood when in the wild. Nearly all newborns die in the first 12 months of their birth. The better expression would be that  their natural enemies, as well as the harshness of the wild guarantees they find the early days very difficult.