DoWhen we hear the word “panda”, most of the time we only associate it to the huge, furry, black and white giant panda’s. But these big guys aren’t the only pandas out there. There is a lesser known endangered species of pandas, known as the Red Panda.

The cat-sized panda, (discovered about 48 years before the giant panda) are arboreal carnivores, and look more like raccoons than their panda relatives. The red panda is also known as the Firefox, and the popular web browser “Mozilla Firefox” was named after them.

They are not closely related to the Giant pandas, and have been placed in the raccoon family in the past. They are now classified of genus Ailurus and the family Ailuridae. This article seeks to let you into the world of these fascinating cat-sized panda.

Red Pandas are easily recognized by their unique ruddy fur, which covers almost their entire body, with the exception of their ears and cheeks. They can grow up to 20 -26 inches in length and up to 7 -14 pounds in weight. They also have a bushy tail used for balancing in trees, which can grow almost up to almost the same length as the body, about 12-20 inches long. They have a white face, with reddish brown stripes that run down on either sides of their face.

These mammals possess strong jaws, with five toes and semi-retractable claws which aids them in climbing among branches. There are no distinct ways to differentiate between male and female red pandas. They have very sensitive tongues which they use to detect scents, and they also have scent glands in their footpads, which they use to mark territories.

They are very good climbers, and have very flexible ankles, which can rotate when they climb down head-first down a tree trunk. The red panda have big-boned round heads and large pointed ears. They have a husky dentition, which they use to crush bamboo.

The tail of the red panda is decorated with six alternating yellowish red transverse rings which provides great camouflage in their habitat made up of lichen covered trees and moss. They possess short black legs which are covered with thick fur on the sides, and also in the soles of their paws. The fur located in the soles of their paws act as insulation against the snow-covered surfaces, and also prevents them from slipping down from wet trees, and also conceals scent glands. They possess a false thumb like their giant panda counterparts, which they can use to grip tightly onto bamboo stems while feeding.

Where do Red Pandas live?

Red Pandas are found temperate mountain forests, on the Himalayas ranges, in countries that include Myanmar, China, Tibet, Nepal and India. They reside at high altitude forests at altitudes of between 1,800 and 4,000 meters.

They live in areas of temperatures varying between 10 and 25 °C (50 and 77 °F), and forests containing old trees and dense bamboo understories. These habitats are very much threatened by intense deforestation and climate change, which has immensely reduced the red panda population in the wild, leaving them to be declared endangered species. They are also poached for their fur, which has become a collector’s item in recent times. Red panda are protected in zoos and parks, and killing them is illegal in many countries.

What do Red Pandas eat?

The red panda is an omnivorous animal (eats both plants and animals), but the bamboo consists a major part of its diet. They are very selective feeders, and in a habitat of up to 20 different species of bamboo, these animals may choose to feed on just one or two of the most nutritious species.

They also eat selective roots, grasses, fruits and insects. Because their diet consists mainly of bamboo, which is a low calorie food, they have to eat a lot, and spend most of their days foraging.

Red pandas are mostly quiet solitary animals, but they communicate with each other with a variety of cries, visual cues and also scent glands. When they feel threatened, they may make high pitched squeals and grunts. During mating, the adults use high frequency twitters and may hiss to communicate. Infant red panda’s will make a loud scream, which sounds like a whistle, when they want to signal distress to their parents.

The breeding season for red pandas occurs from January through April. During this period, the pandas form small groups, and may engage in social activities such as wrestling and biting. The red panda mates on the ground, and the female red panda, just like in the giant panda, becomes fertile just for a day or two in a year, and a fertilized egg does not develop immediately, taking about 114-145 days, to ensure that the cubs are born in summer, for maximum chance of survival.

The cubs are delivered between the months of May and July. Few days after delivering a litter, which is usually between one to five cubs, the mother builds a den, usually in the hollow of a tree trunk, or a crevice in a rock, and makes it comfortable for the cubs using leaves, grass, and twigs. The male red panda does not take part in raising cubs. The cubs are born blind, with grey fur, so it is important for the mother to protect them in the den, until they at least can see and hear. After about 2-3 weeks, the cubs begin to open their eyes and ears. Their grey fur changes to red at about 5 months, and are as large as their mother at this point.

They reach full maturation at about 18-20 months, at which point their mother drives them away, so she can mate and raise her next set of cubs. They can live up to 15 years, and while females cannot reproduce after the age of 12, male red pandas continue to be capable of reproduction.

Behavior and Lifestyle of Red Panda

With the exception of the mating season, when the red pandas come together to form small groups, they are generally solitary animals. They are nocturnal mammals, and spend most of the daylight hours napping in trees, with their long bushy tails forming a blanket to keep them warm. While they feed in trees, red pandas usually come down during the night to forage on the ground.

They are territorial animals, and are known to mark distinct territories using secretions such as urine, droppings, and anal secretions as well. In captivity, they can be active during the day. At very cold temperatures however, red pandas are very much less active, reducing their metabolism rates. This allows them to spend very little energy during cold periods, which is beneficial, considering the fact that their major food source, bamboo, has a very low nutrition content. They also curl up into a tight ball of fur to regulate body temperatures, but at higher temperatures, they pant and stretch out their bodies to reduce body heat. The red panda is very heat sensitive, and cannot tolerate temperatures over 25 °C. Their optimum performance temperature ranges 17 and 25 °C (63 and 77 °F). They are hygienic animals, and their first task after waking up is to clean their fur like cats, and also rubbing their backs and undersides on trees.

When backed up in a fight and they can no longer flee, male red pandas, just like their relatives, the giant pandas, fight by standing on their hind feet and boxing with their claws. Red pandas are generally believed not to like water. They drink by putting their paws in water licking it off. 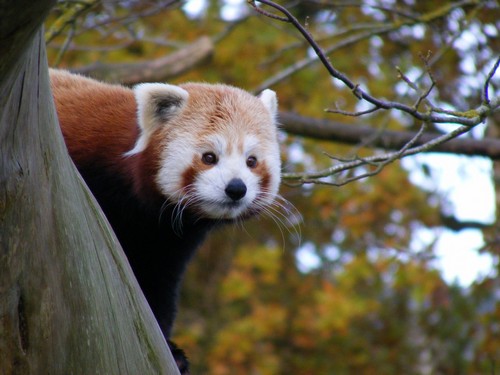 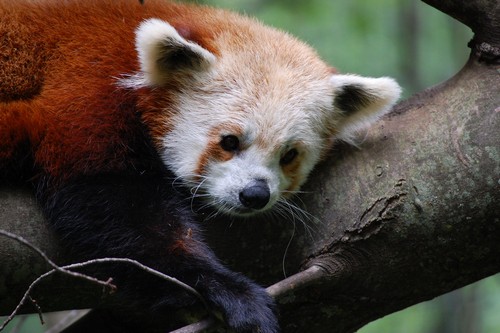 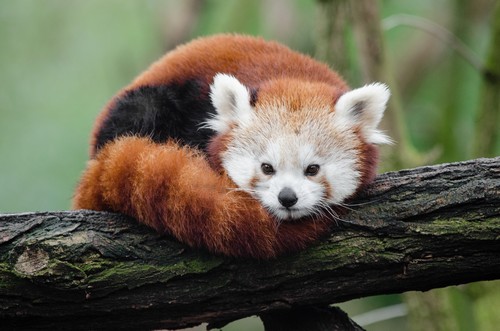 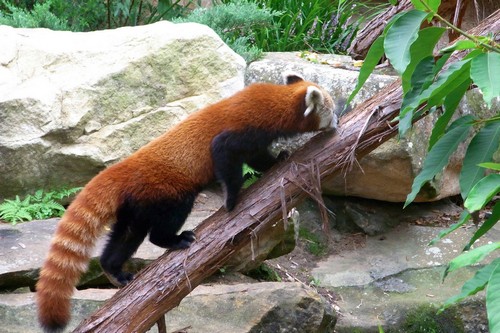 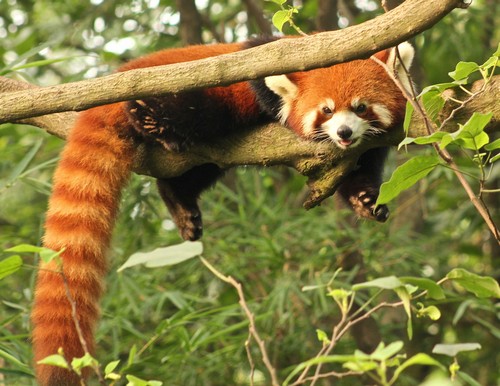 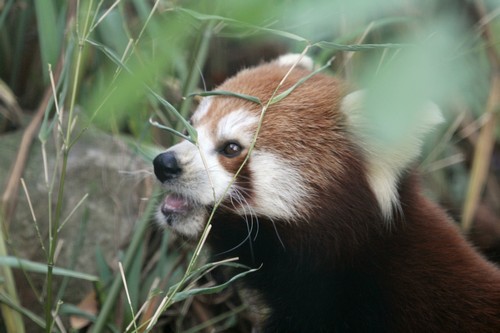 Red pandas reside at very high altitudes, and as such, have relatively fewer natural predators than they would have had living at lower altitudes. Their main natural predators include Martens, Snow Leopards, and birds. Other small carnivores could also prey on the red pandas.

The biggest threats to the survival of red pandas are humans, who due to deforestation, are encroaching more and more on the panda population, and depriving them of their sources of food and shelter. Illegal poaching and hunting for their hides have also added to the increasing declines in the numbers of red pandas in the wild. 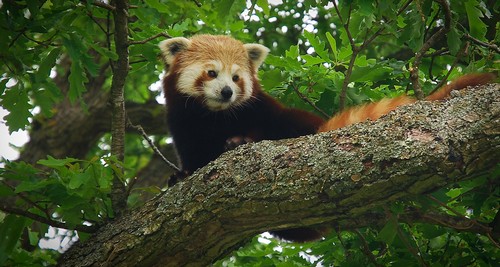 In some parts of China, the red pandas are hunted for their tails, which are sought after for local cultural ceremonies. These tails are fashioned into hats, which are often carried by newlyweds, and is believed to signify good-luck. Practices like this severely affect the red panda population, in communities in which they are practiced.  The pandas are listed as endangered species, with about 10,000 pandas believed to be living in the wild, which includes protected zones in parks around the world.