Ravens are some of the most popular birds in existence. Everyone or just about everyone has seen a raven in a movie. In most movies, ravens are used to depict something ominous such as death or ill-luck or impending doom. Since not much is known about this bird, it is often seen as an evil creature. However, that is not true. Raven birds are cute birds if you know enough about them. By the time you are done reading this article, you will discover a lot of intriguing facts about this bird. But we shall begin with a special specie of this bird – the white raven bird.

As you may have correctly guessed, this bird has a plumage that is entirely white. The most popular ravens in the world have a black plumage. In fact, nearly all ravens are black. But once in awhile, we get to see a white. Not much is known about white raven bird in recent times as they are very rare.

The raven has a lot of significance to different people and lands and in different situations. Little wonder it has been an integral aspect of the folklore of several ethnic groups. Dating to as far back as 5000 years BC, the Egyptians, Chinese and Greeks have found both use and meaning for the bird.

In China, for instance, this bird is seen as a harbinger of poor weather conditions such as rain storm, sand storm. It was common for the ancients to scuttle to their homes and seek shelter as soon as they sight a raven making calls near their homes on a cloudy evening. In most African and European legends, this bird is outrightly a symbol of impending death. It is very easy to notice this in epic series such as the Game of Thrones, The Adventures of Merlin and Legend of the Seeker.

For some people, in many cultures, the raven bird is undoubtedly recognized as a symbol of the underworld. Some even believe it is a messenger from the underworld used to announce where death would strike next.

As expected, the raven feeds on the remains of other birds and animals too. Together with the African vulture, they are the world’s leading avian cleaners. Little wonder many cultures see them as and use them as purifying agents in sacrifices and more complex rituals. As a result of their brilliance and calculated actions, they come in handy for individuals looking to learn a thing or two about magic.

How do the Celts view the raven? Not too differently from what most Europeans view it as but a little more highly though. In ancient Scotland, the appearance of a raven indicated that a war with a neighboring tribe was imminent. Many Celtic prophets got one or two ideas from the bird which was considered a prophet of some sort.

Another important element the raven symbolizes is time. In many cultures, the appearance of a raven indicates that one is running out of time in a certain activity, or running out of time for life itself. What we can perhaps consider the greatest symbolic association people have with the raven is that of a connection to the divine. In Greek mythology, for instance, the raven is believed to be able to convey messages from the world of the living to the land of the spirits. There is a particular belief that it sends messages to the god Apollo especially at nights. Since the god Apollo overlooks the sun, it is equally believed that the affinity of ravens to the darkness of the night does not remove anything from its abilities to communicate with the sun.

While most people and traditions associate the raven with evil, the fairies see it in a very different light. You would recall from fairy tales that the raven was also the talisman which the Queen of Fairies was always associated with. So, it doesn’t matter where you come from or what your body of beliefs, you may have something in stock when you buy into the ideology of a raven’s mystical abilities.

Are Ravens and Crows the same bird?

Though closely related, they are not the same animals. To differentiate a crow from a raven, pay attention to their individual calls. To be clear, the crow’s call is way louder than a raven’s. Again, the crow’s call has a higher pitch, and sounds more aggressive than a raven’s call. For clarity, the raven is a bird which falls under a genus in the crow family. While the raven is just an individual specie in the family, crow is a general name used to refer to all birds which possess the same crow features.

You have read a good number of interesting facts about the raven bird already. However, you can enjoy more interesting facts about this bird when you go through the special collection of the bird’s coolest facts which soon follow.
Fact #1: Largest Type of Crows
Ravens have a pair of wings that span of at least 1m and weigh about 1.3 kg. With these dimensions, they are clearly the largest birds in the crow family.

Fact #2: They Live Very Long Lives!
Birds in general, live long lives as is observed in eagles, vultures and cardinal birds. The raven however, has taken the game of long life to a whole new level. Researchers have discovered that they compete well with humans in terms of life. Many ravens in the wild show an average lifespan of about 40 years, and this is due to heavy predation, insufficiency of food and loss of natural environment. There is also the constant threat from poachers. In captivity, however, these threats are eliminated; giving the birds the opportunity to live up to 70 years or more as the case may be.
Fact #3: They Are Versatile Birds
Most birds have a particular habitat, outside of which they cannot thrive. This rule seems not to apply to ravens. They have been spotted in both thick forests and hot deserts. Not only that they are versatile enough to survive in multiple habitats, they also know how to make use of the available resources within their habitats to make their homes. For instance, they will simply locate the nearest rock crevice big enough to accommodate them in the  desert. In thick forests, however, they use small tree branches to fabricate spacious nests for themselves.
Fact #4: They Are Notorious Scavengers
Finally, the vulture finds a colleague – the raven. This bird typically feeds on waste food which they find littered in their environment. Although they can eat seeds, fishes, lower animals and fruits, they also take delight in snatching as much food as they can from both other animals and humans. they have been known to dig up some buried baggage in the hopes of finding anything edible in them. Together with the American Bald eagle and their cohorts, stealing of food is a norm. 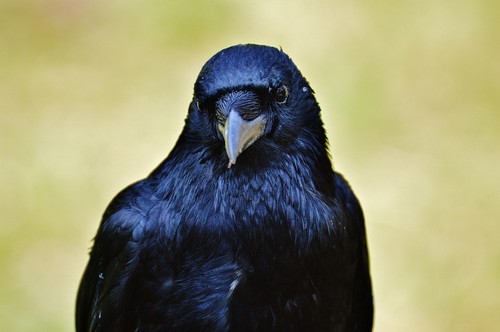 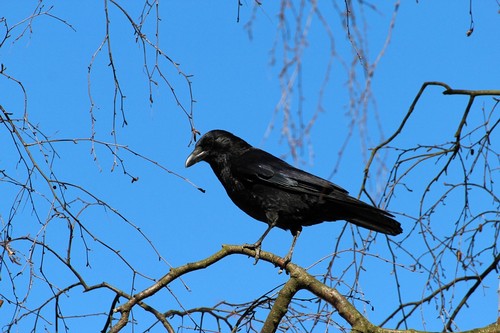 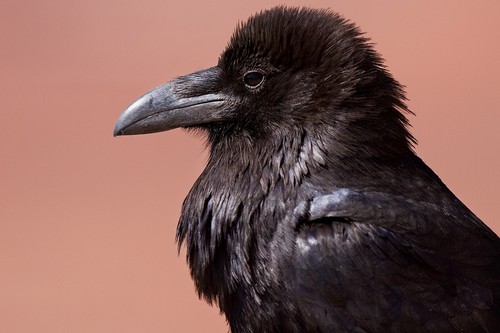 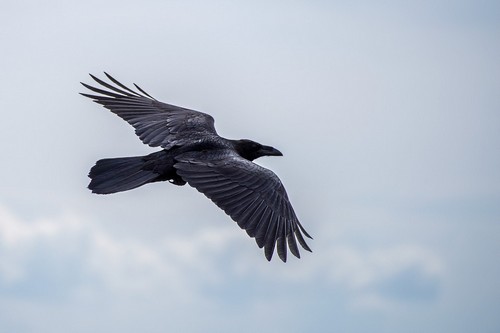 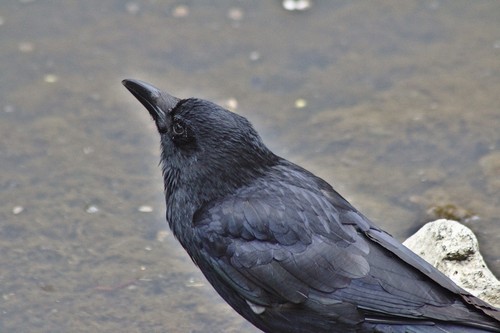 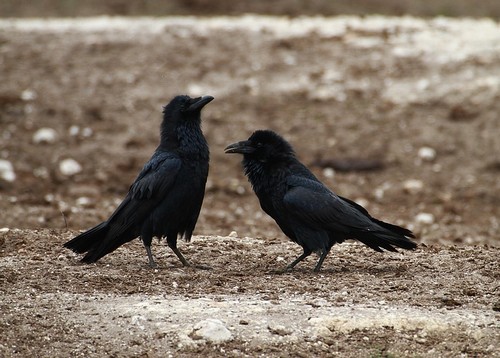 Fact #5: The Have Great Vocal Abilities
They have the rare ability to express different emotions with various sounds. True, they may not be able to speak as humans do, but they attempt to do so in their own way.  Depending on how the cry seems, it will indicate the birds state of mind: fear, anger, happiness and tenderness. Some linguists believe that the variety and excellence of the raven indicates that they can be taught how to speak. However, there are not enough evidence to prove this fact.
Fact #6: They are very Intelligent
You may forget the beautiful scarlet macaw and the doves of Western Europe, ravens are the undisputed champions when it comes to intellectual abilities. In fact, some tests have shown that they are smarter than chimpanzees who are often regarded as the animals with the highest IQs. Several experiments, as you would find on YouTube has seen ravens execute complex moves and activities which require logical reasoning, and which regular birds will not be able to do no matter the number of times they try.

To further prove their intelligence, they have learnt to make other animals work for them. They are the boss birds you know.  If they find a huge carcass for instance, and cannot break it open, they would call out other bigger mammals who would do the job. When these bigger animals are done, they would proceed with devouring what’s left of it.
Fact #7: Ravens Have Numeral Skills
This is perhaps a reason every human should be able to count. For goodness sake, ravens are doing it. On a lighter not though. Some scientists and ornithologists have managed to capitalize on the brilliance of this bird to make even more magic. On special training, ravens can count. Period! 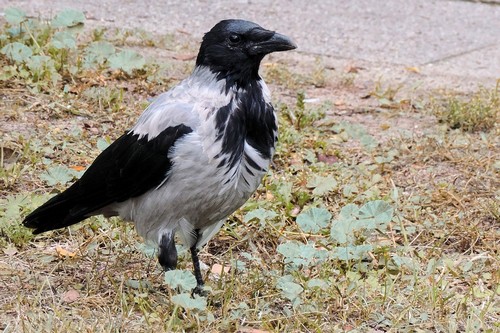 What you have read thus far about the raven bird – as exciting as they may be – are not all there is to the bird. Do well to see more explanatory videos of this bird on video streaming platforms such as YouTube and Vimeo. National Geographic is also another enthralling source of information and live videos on ravens.