Walking along the silent jungle, the air is suddenly pierced by the distinct sound of a rattling. This sound is enough to make you stop and look around you very carefully. As a matter of fact, it is enough to make other animals disconcerted as well.

The rattlesnake, although feared, is one interesting creature. It not only has a lot of interesting things to learn about, but is also considered as the most evolved snake in the world.

Here are some interesting facts about the rattlesnakes that we should know about.

Rattlesnakes are believed to have originated from native America. They are however now found in every different habitats. Majority of rattlesnakes are found in the American southwest and Mexico regions.

The eastern side of the Mississippi river hosts about four species while South America is home for two. Texas and Arizona are the states with the highest number of rattlesnakes.

Rattlesnakes can survive in a wide range of habitats so long as they can support terrestrial ectothermic vertebrates. Some of these habitats include prairies, marshes, forests and deserts. Most species, however, can be found in open rocky areas. This is because there is an abundance of prey. Prey ranges from Lizards to birds to rodents. The rocks also provide them with plentiful cover.

Rattlesnakes prefer temperatures ranging from 80 to 90 degrees Fahrenheit. They are also known to survive below freezing temperatures.

Rattlesnakes’ mode of hunting involves waiting for prey or going for it in holes. Its venomous bite is the most useful of its hunting techniques. A rattlesnake will follow a bitten prey using the sense of smell and once it located the dead prey, it will confirm a kill using its snout or tongue.

Ingestion takes place with the prey going in head first for ease of swallowing. This makes it easier to swallow even birds.

They have very powerful gastric juices. These juices digest everything, even bones.

If the prey is small, the snake will move on to find other prey. However, in the event the catch is big, the rattlesnake moves to a warm place, curls up and wait for digestion to take place.

Rattlesnakes need water as well, and they achieve these using two methods, depending on the circumstances. On large water basins, the snake will drink water by submerging its head into the water and drinking water by opening and closing their jaws.  When dealing with scarce waters, or shallow puddles, they sip the water by capillary action or by means of flooding their lower jaws through flattening it.

As much as they are predators, rattlesnakes are also preyed upon by other species.

A rattlesnake’s bite, to human beings, is not fatal if treated immediately.

Rattlesnakes have two organs used to sense radiation. These include their eyes and a set of heat sensing ‘pits’ on their faces. They enable rattlesnakes to locate prey and move towards it, based on the thermal radiation signature that the prey emits.

Pits can only sense prey up to one foot away, a short distance, but at times all that is needed to hunt a warm-blooded animal. The thermal radiations are sense from the animal in the atmosphere.

Rattlesnakes are so effective in sensing thermal radiation in the atmosphere that a 0.003degrees change can be detected.

Their eyes have enough rods to allow them to see better at night. However, rattlesnakes see better during the day. Due to the lack of fovea, which is responsible for sharp central vision, rattles are unable to see sharply defined images. This means that rattlesnakes will mostly rely on movement perception.

They do, however, have a keen sense of smell which is either achieved through their nostrils or the flicking of their tongues. The tongues contain scent-bearing particles on the Jacobson’s organs in the roof of their mouths. This organ’s function is to detect chemical stimuli in the air.

Rattlesnakes do not have external ears and neither are their internal ears as specialized as those of other vertebrates. This means that their sense of hearing is not as effective. Rattlesnakes can however sense vibrations in the ground, directly passed by the skeleton to the auditory nerve.

Rattlesnakes have fangs connected by venom ducts to large venom glands. The venom gland is found near the outer edge of the upper jaw. As the snake bites, muscles on the side of the venom gland squeeze the venom to the venom ducts and into the fangs. When not in use, these fangs are folded against the palate.

They have fully functioning fangs from birth. A newborn rattlesnake is actually capable of killing prey. Adult snakes shed fangs every six to ten weeks. A rattlesnake has hemotoxic venom which causes premature death of the cells and excessive bleeding. The venom is also a cocktail of enzymes, lipids, polypeptides, biogenic amines, metal ions protein and free amino acids.

The venom works to disable and immobilize prey. It also contains digestive enzymes which start digesting body tissue way before ingestion takes place. The venom can remain potent for years and the older the snake the more potent the venom is. Also, the larger the snake, the more likely it is to hold large amounts of venom. 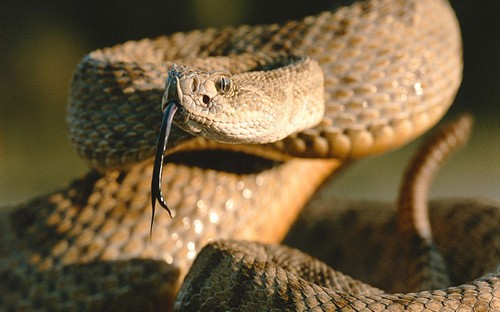 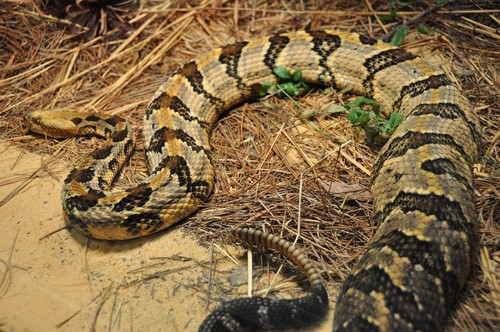 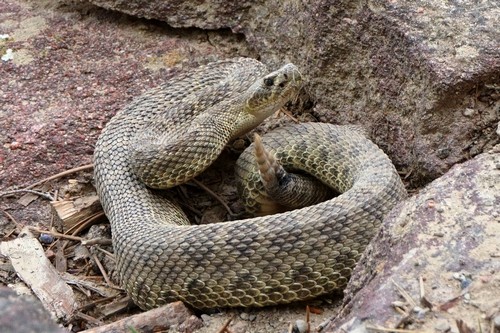 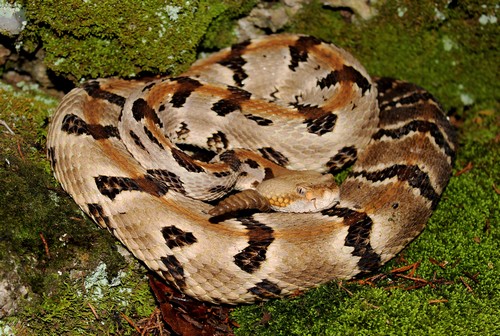 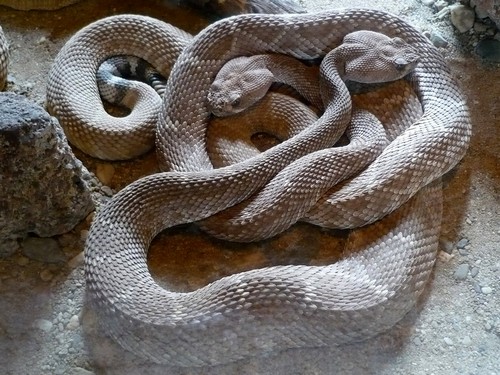 The rattle, from which the snake’s name comes from, is used to warn predators to stay away. The rattle is made up of a series of interlocked segments known as keratin.

These segments are hollow and are created by modification of scales that cover the tip of the tail. The segments vibrate against each other by action of contraction of some special muscles found in the tail. The hollowness helps in amplifying the sound. A new segment is added every time the snake shed skin. This can happen several times a year.

Rattlesnakes are known to protect their tails by moving while holding them up. This prevents the tails from wearing down and breaking off. It has been noted that some segments do wear out.

A rattlesnake’s skin is covered by a series of overlapping scales that cover the entire body. The skin not only acts as protection from trauma and dehydration, but it is also used to sense temperature changes which help the snake to locate warm areas. 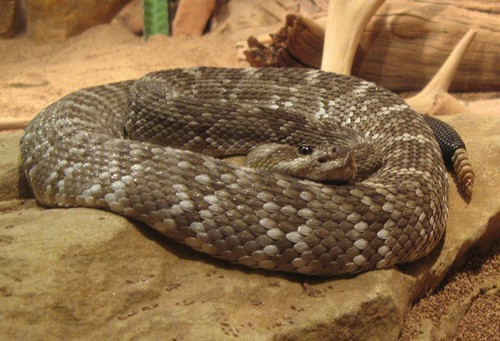 Rattlesnakes are fully dependent on the environment to maintain a stable body temperature, which makes them cold blooded animals or ectotherms. Rattlesnakes often move in open and sunny places in order to absorb heat from the sun and warm ground.

Female rattlesnakes are ovoviviparous which means they give birth after carrying the eggs inside. They are also known to store sperm from males, which allows them to mate and then stay for a long time without fertilizing their eggs, only to do so when the season favors them.

Rattlesnakes take long to mature and a female is known to reproduce once every three years. They also stay with their young ones in the nests for a several weeks.

During winter, rattlesnakes will enter a periods that is similar to hibernation called brumation. During this period, a large number of snakes, possibly thousands, meet in one ‘winter den’ and share warmth. They are also known to share their dens with a variety of other species. 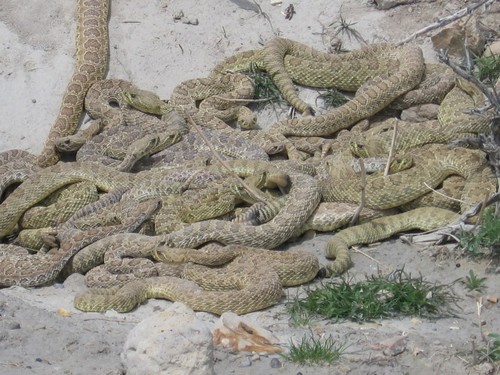 Snakes that take a longer period of brumation reproduce less than those that take a shorter time. Rattlesnakes do not usually change winter dens and are known to travel long distances just to get back to their winter dens. It is yet to be determined what they use to navigate.

They avoid urban places and prefer natural, undisturbed habitats. This is due to human beings killing them for sport, among other reasons. Some rattlesnakes have been killed by being run over by cars, while people even have festivals for killing rattlesnakes.

Rattlesnakes living in urban areas have been known to lose their ability to rattle in order to survive.

The average lifespan of a rattlesnake is about 20- 30 years in captivity. It is less in the wild due to predation, death by accident or disease.

Rattlesnakes are not extinct but because of loss of habitat, hunting and aimless killing, its population are decreasing throughout its range.