The pygmy marmoset is greatly uncommon, also known as, dwarf marmoset, chi chic, monkey pocket or red skin. They are also known by some as lion tamarin monkey. It is a species of the primate of the Callitrichidae characterized by its small-sized species of monkey.

The following are some fascinating facts about Pygmy Marmoset:

Gender Cebuella was initially proposed as a subgenus Callithrix because of its close relationship; however, later it was considered as a distinct genus. Cebuella was finally included in morphological and genetic analyses and was classified under the genus Callithrix. It is genetically close to Callithrix jacchus.

There are two subspecies of Pygmy Marmoset:

Pygmy marmoset exists within two subspecies, based on field observations in the interfluvial of the Purus and Madeira rivers, and specimens in captivity. It was identified as  Cebuella pygmaea niveiventris  because of the whitish fur on the chest, abdomen and inner side of limbs and located on the south bank of the Rio Solimões while the Cebuella pygmaea pygmaea  has a ventral surface that is pale brownish yellow in color.. However according to some authors there are  exposed arguments that invalidate the subspecific status within the species because of their color of the extremities as an individual variable and locally.

In 2009, Cebuella, previously considered Callithrix subgenus, jump up to the rank of gender, including as a single species to Cebuella pygmaea pygmaea

Pygmaea prefers secondary forests near waterways. Inhabits tropical lowland forests of the western Amazon. Distribution and density correlate directly with the presence and abundance of species of trees and animals that are part of their diet.

They inhabit rainforests of low rainfall or forests composed of reeds, tall grasses, vines, shrubs, and saplings up to 30 or 40 m at the edges of rivers. They usually make homes near rivers at a height of about twenty meters or sixty six feet.

Their home ranges typically include about 20 to 60 m inland and vary in size with an average of half a hectare. Within it, the population size is influenced by the density of predators and competitors, especially arboreal ants that invade the holes made by the tamarins to feed on exudates. They can compete with brown-mantled tamarin, mustached tamarin, red-bellied titi, and common squirrel monkey species Aotus.

They live in South America and are distributed in the western Amazon basin, south of the Rio Caqueta (Japurá) of Colombia, west in the the Amazon of Ecuador, south through the eastern lowlands of Peru to the right bank Ucayali river, north of Bolivia, with an area of northern Purus river and Solimões river Brazil.

It is the kind of platyrrhine (New World monkeys), with a size of 14 to 18 centimeters with partially surrounded or completely dark rings on their prehensile long tail, which exceeds body length reaching 15 or 20 centimeters.

Males and females have similar size with an average weight of 119 g and an average length of 136 mm. There is no much difference between the male and female pygmy marmoset. The one and only difference is that the female look a little bit heavier than the male

It has a coat that is thin, soft and dense, ranging from gray to brown with some yellow and black shades with orange normally the lower part varying from red to white. Long hair forms a mane around the face and neck almost completely hiding the ears. They have the most specialized and numerous sensory hair of primates in the elbow, wrist, forearm, lower jaw and chest. Their hind legs are generally longer than the front for movement on tree trunks.

They have claws on all digits except the big toe where there is usually a flat nail. Unlike most molars primates has two instead of three; for a dental formula 2/2 incisors, canines 1/1, premolars and molars 3/3 2/2 for a total of 32 teeth.

Pygmy marmoset are suitable to live in the trees and like owls they have the capability to rotate their head up to 180 degrees and with the use of their sharp claw nails, they can cling to tree branches without difficulty, they can even leap up to five meters between branches.

They are omnivorous, feeding on the sap of certain species of plants in the forests along with rivers and lakes. They try to find fruits and insects making noises every time they find a food source. They usually create holes in the trees to absorb the sap, returning days later to feed on the same hole. The holes are 10 to 20 mm wide and 4 to 18, the first depth being made towards the base of trees. Apart from the sap, they also eat exuded substance that flow out from plants such as rubber, resin and latex. 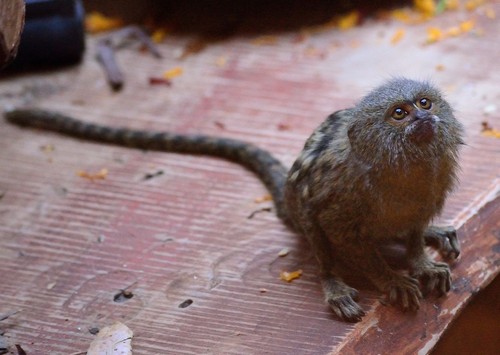 They have an expanded cecum, a part of the digestive tract that allows more time for the breakdown of plant gums or saps. The lower incisors of Pygmaea are narrow and elongated so that the five teeth at the front and center of the lower jaw are all the same length allowing gnaw trees and stimulate the flow of sap.

They feed on plant or leaves, different types of fruits and nectar. They also consume grasshoppers, wild bees, moths, butterflies, dragonflies, and lizards but their favorite food is the liquid coming from the sap that their drill using their lower canines. The species of trees that feed vary from group to group regardless of the availability and abundance within each of the localities.

They live in small groups of three to eight individuals with an average of five at most is twelve, presumably families headed by a couple of adults, from 0 to 3 sub-adults, 0-2 juveniles and 0 to 2 infants. They are timid and  love to spend their spare time to bond with each other. If one of their group members dies, they can also show great sadness. They also communicate with each other, in fact it’s a part of their social system. They use a certain calls if they want to tell if there’s a danger, to initiate mating and they also use a  constant calls which is a very high-pitched sounds when they want to show hostility.

If faced with a possible predator, they do mobbing in which the entire group meets and attack the intruder until it go away, or remain motionless until the threat has passed.

They commonly have diurnal activity starting shortly after dawn. Usually, the day begins with feeding (which has two peaks during the day, from 6 to 9 and 15 to 18) to make way for social activities such as grooming and playing. They are quite agile in moving along the trees despite its size, especially in the mornings and evenings. They move along the branches swiftly. 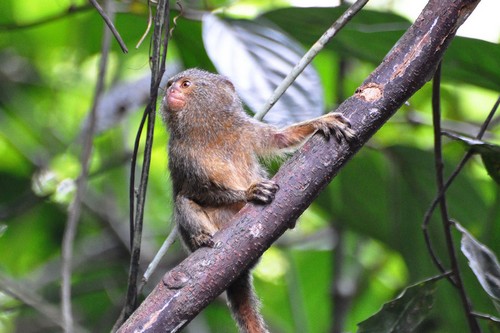 They are the docile and friendly character, preening and communicating each other with facial expressions thanks to the perception of two spots located on the sides of the mouth and a vertical white line to the crests which together with the large head movement, posture and vocalizations confirm their social relations. This movement allows them to explore the environment in search of predators while clinging to the trunks vertically.

Some authors believe that they are monogamy however, observation so far indicates that groups are polyandrous. Gestation lasts between two and three months (130-150 days) after which give birth on average two non-identical offspring carried by members of the group. Like humans baby pygmy marmoset involves a lot of caring. The coat of newborns is different from adults, with a lemon yellow color that is lost after the first month. The mother suckles up on average, three months old, reaching reproductive maturity in females and males about the year or year and a half to 11 years living in the wild. 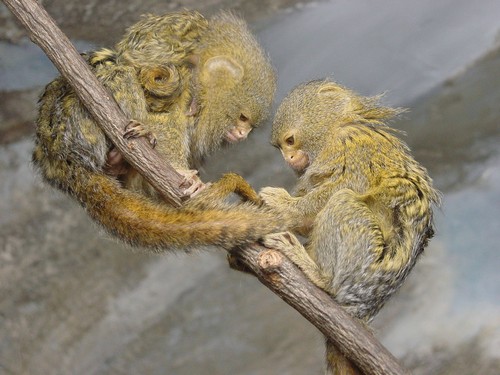 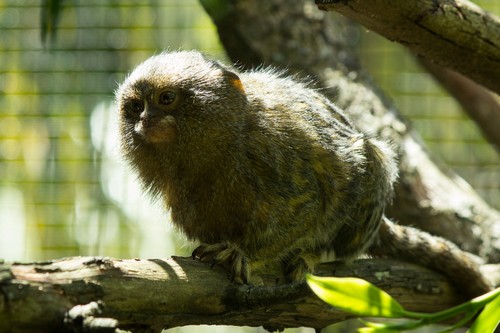 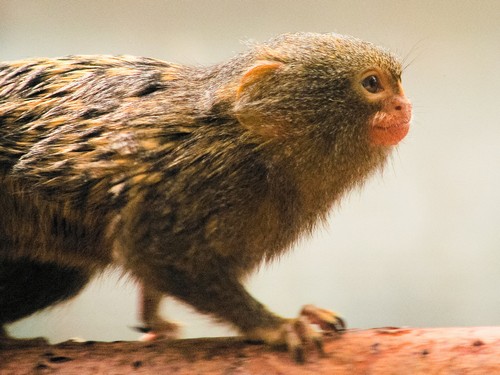 Reproduction in the wild has been observed approximately every 6 months. Gestation in captivity lasts between 19 and 20 weeks. The minimum age at first birth in captivity is 32 months with a frequency of about 67 to 76% of births are twins. 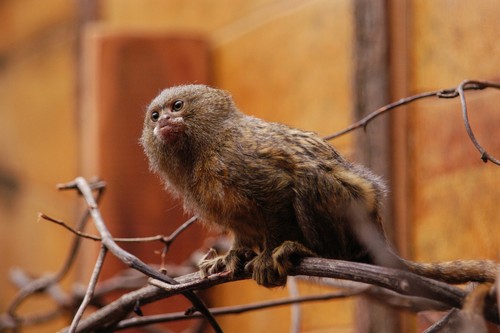 The newborn has fur, except for her belly, and her eyes are open at birth. The development of young people have been classified into the following age groups: 6 1 infant (under 1 month) with small teeth and carried by adults or juveniles; Children 2 (2 to 5 months) with small independent locomotion, begin to grow permanent teeth; Children (6 to 12 months), smaller than an adult and small genitals, black circle anogenital begins to appear by the end of the ninth month, all permanent teeth have erupted; sub-adults (12 to 16 months), they are still slightly smaller than an adult with an incipient scrotal pigmentation and small canines; from 16 months sexually mature and canines reach normal length. 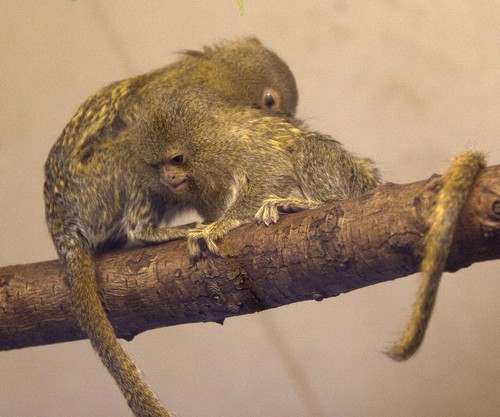 All in all, the Pygmy Marmosets are curious creatures who have fascinated humans for decades.