Pygmy Hippo (Choeropsis liberiensis) and the Common Hippopotamus (Hippopotamus amphibious) both belong to the same class of family called the Hippopotamidae. However, the Pygmy Hippo is smaller in size as compared to their cousins the Common Hippo.  They are large mammal native to the swamps and forest of the Western Africa. The two Hippopotamus have so much in common that it may not be easy to note the difference between them. However, Pygmy Hippos are rear species from this family. It is believed that one time in existence, there were never many of them in the face of the earth. Although their numbers have been increasing rapidly though mostly in the Zoos and not in wild as their cousins the Common Hippos.  Currently, there is about 3000 Pygmy Hippos in existence.

As mentioned, without close observation, you may never note any difference between Common Hippos and the Pygmy Hippos, they are members of the same family and the resemblance in character makes them fit in together more. With close observations, however, it’s possible to pin out the major difference between the two hippopotamus.  Pygmy Hippos are nocturnal and reclusive. From head to tail they measure five feet and while standing they are about two and a half feet tall. When fully grown, they weigh around 350- 550 pounds. Which is a relatively small size compared to their relatives the Common Hippo.

Just like the other Hippos from the family, they are semi- aquatic although they depend on water so much to keep their body temperature cool and moisturize their skin. Pygmy hippos are known to display many terrestrial adaptations which make them live from all environments. Their skin has a shading of creamy gray on the lower body and its naturally greenish- black. When it comes to mating and giving birth, Pygmy is the rear group of mammals who can do it from both the water or on the land.

On each foot the Pygmy Hippo contains four toes which are widely spread, they don’t have more webbing like the Common Hippo and this gives them more stability while walking on land as well. Unique from the Common Hippo, the nostrils of Pygmy are lower down on their muzzles and their eyes are found to be on the side of their heads rather than on the top which helps them to scan around while they are in the trees. They also have tusks in for of long canine, even if they are less as impressive as those in the mouth of a Common Hippo, they still serve the purpose of intimidating intruder and rivals.

When it comes to swimming, Pygmy Hippos are known to be the best. With their muscular valves, which close off their nostril and ears when they are fully submerged into water.

Both Hippos have a way of protecting themselves and more evenly their skin from infection or from the sun rays. To do this, they all produce different types of fluid from their skin to serve the same purpose. The Common Hippo produces a fluid which is red in color while its relatives the pygmy extracts white fluid for the same service. In case they have wounds on their skin, it’s this fluid that helps in cleaning the wounded area, this fluid also has some antibacterial properties which ensure even if the Hippo goes through dirty water, and the wound will not catch any infections.

Pygmy Hippos are more dependent on the earth and their body shape fits them perfectly and enables them to undertake the respective duties on the land than when in water. In relation to their body, they have a small head and a narrow mouth which make it easy for them to run across the forest at a moderate speed. It is believed that Pygmy Hippos moves at a high speed of about 30 kph through the vegetation marked tunnels.

Pygmy Hippos are commonly known to live in rivers and swampy settings in the damp and thick lowland tropical forest. However, they are known to love to be at burrows which are close to where rivers are. Although they can live well on both water and dry land, they don’t love being far from water since it’s also a very important component in their life. An interesting fact about these Hippos is that their skin cannot sweat.

Whenever Pygmy Hippos feel threatened, they would show their canine through a large ‘yawn’ which is their type of posture to scare any possible enemy. They do not keep territories but in case they see a trespasser, they will always attack in self-defense.

Their nocturnal habits are very secretive therefore little about their lifestyle is known although it is known that they are not as gregarious as Common Hippos.  Pygmy Hippos live either alone or in pair. Since they are not in keeping territories, other Pygmy Hippos are free to walk and graze into others home without any problems. However, the fact they don’t observe territories doesn’t mean they don’t have home area. They make their homes well with spreading their dung to define their paths. This is perfectly done using their tail during defecation.

Both species of Hippos are thought to be in a close relationship with the Whales than with any other even-toed mammals in the jungle.

Pygmy Hippos are fully grown and ready for mating when they get to the age of 3 years. Unlike their relatives the Common Hippos, Pygmy Hippos are known to have a relationship before mating. This behavior is not common to the others. This period I called the consorting (keeping one another company) or in simple words, we may call this period the courtship season.

When Pygmy Hippo males are ready for mating, they are commonly found fighting for females to have their company. Here they apply the same techniques as their other relatives the Common Hippos.

Mating for Pygmy Hippo can take place anywhere. It may happen in the water or on land.  A female Pygmy keeps her pregnancy for a period of 6 – 7 months. She will then give birth to a single calf which during birth will weigh a rough estimate of about 10 – 14 pounds.

It is not common for a Pygmy Hippo to give birth to twin calves. However, there is so much difference between Pygmy and Common Hippo when it comes to giving birth.  When Common Hippos give birth and welcome their young ones in water, Pygmy does this on land under dense vegetation in a den. 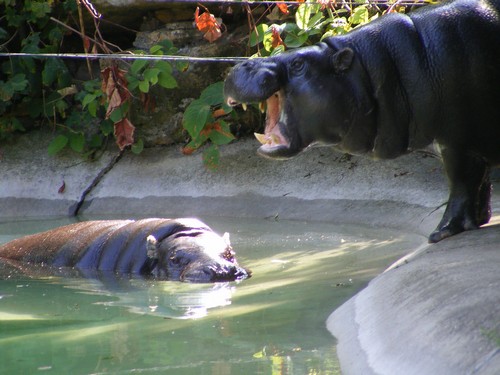 When a calf is born, he can swim immediately after birth. When they reach the age of 8 months, they can follow along with their mother in the forest as they go foraging. Pygmy Hippos are among the animals that are known with the longest life span. Their life span ranges from 30 – 50 years. This guarantees that they can live long enough just like the humans.

Pygmy Hippos belong to the large family of the herbivorous animals.  They are strictly vegetarians. They are known to consume different types or plants in the forest to get all the nutrients they require for survival and growth. There is also a significant difference between the two Hippos. The Common hippos feed almost only on grass while the Pygmy hippos, feed on every plant. They also feed on leaves, fruits and shrubs that fall into the forests from branches and trees within their habitats.

Pygmy Hippos don’t chew their cud although they have multiple stomach chambers like some other horned animals. This multiple chambers functions just like that of a ruminant. Although they do not have the same digesting habits, they are classified under the same cluster called “pseudo-ruminants”. 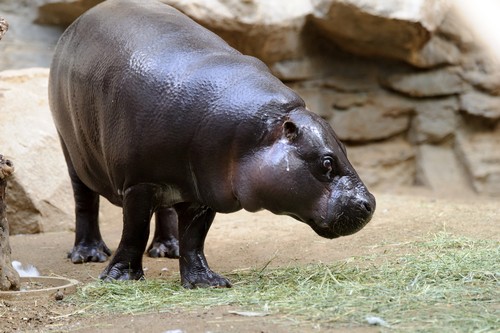 Pygmy finds pleasure in feeding when there is less danger for them. Therefore, they love feeding on the afternoons and eats throughout till late night. This way, they can cover their areas well with minimum risks or danger of being ambushed by their enemies. They use these tactics to also ensure that they have secure escaping routes in case of any danger that may occur while in the forest. 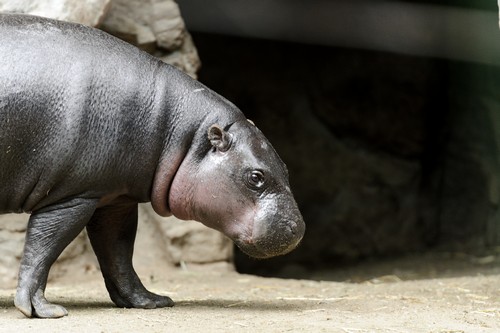 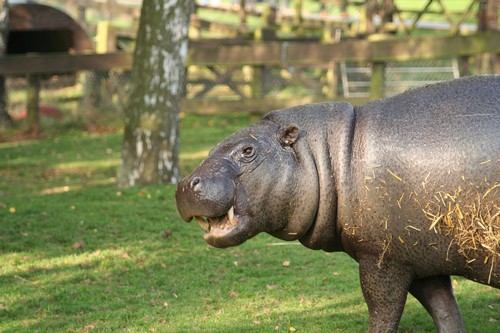 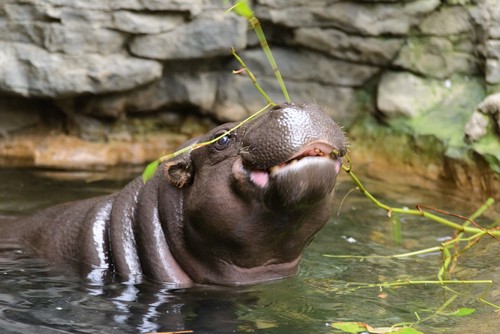 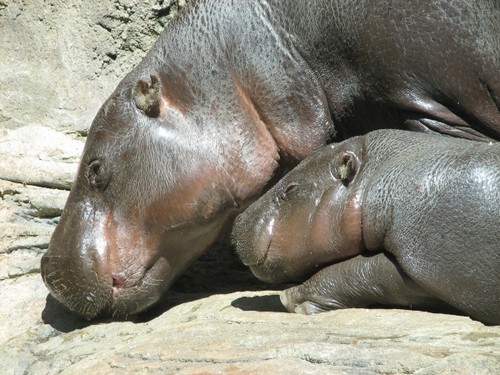 Their relationship with human

From the ancient Egyptian times, Pygmy Hippos has fascinated with people although the same people have been exploiting them. Even if the Pygmy Hippos today are getting legal protection, they are still in fear of people since they are hunted for their meat and teeth on daily basis.  It is believed that the Pygmy Hippos meat tastes almost the same as pork although they do not belong to the same family.

Pygmy Hippos are among the animals that do not have major threats from any predators due to their massive large size.  However, the young calves when they are foraging alone without the care of their mothers are more vulnerable to fall into the trap of Wild Cats and the big snakes such as the Python.

Therefore, the major threat for these animals remain to be people.  The large parts of Africa’s tropical rainforest have been experiencing illegal deforestation which in return, has been pushing these species away and away from hideouts. Continuous hunting them for their meat and teeth has been evident that this type of Hippopotamus has reduced drastically in number. 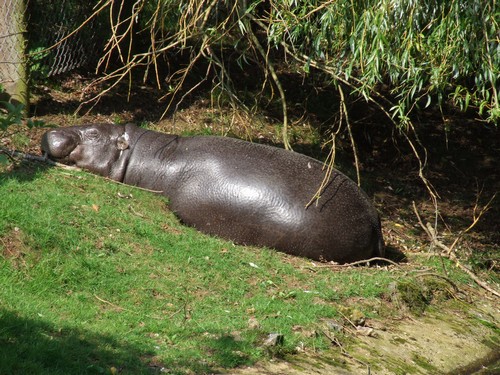 If along they would be preserved and maintained this is a species that would bring a lot of life in the wildlife. However, the implementation of Zoos has played a major role in ensuring that they do not just vanish into thin air by keeping them safe from any type of harm. It is through this care that we can see them breeding and existing once again even after being hunted for a very long period by humans.