It is pretty easy for anyone to confuse a pronghorn with an antelope because they closely resemble each other. However, the difference between these two animals is quite obvious when one pays attention to the small details – It is always in the little details.

As the name – pronghorn- suggests, the horns are the main distinctive feature when it comes to this animal. And like every other thing known to and discovered by human beings, pronghorns also have a scientific name. Antilocapra Americana, in English, it means ‘American antelope goat.’

So what exactly are the features that make this particular animal unique or different from antelopes and goats?

A pronghorn’s horns are its best and most intriguing of its physical characteristics. They face forward and have branches. The horns usually break off, in late fall or early winter, to make room for new ones which by then have already started growing in. Male horns are about 25cm long while female horns are averagely 12 cm long, making the female horns way shorter than the males.

Sometimes, the horns of the females are not even visible. For females, the horns are straight and rarely pronged. You can tell a male from a female further by looking at the mandibles. Males have a patch of black fur at an angle of the mandibles.

It is important to note that each horn is comprised of a tiny flattened blade of bone. This bone grows from the frontal skull bones and forms a permanent core. Usually, there is a skin that covers this bony core. In pronghorns however, this skin is developed into a sheath. This sheath is re-grown and shed annually. The name pronghorn comes from the fact that each sheath has a forward pointing tine.

Pronghorn’s eyes appear to be on the sides of its head but are facing forward. They are gigantic hence the animal can detect movement made at a  4-mile distance; a 320 degrees vision to be precise. According to scientists, pronghorns can detect movement faster than they can detect stationary objects.

Their vision does come in handy since they are natural food to many wild animals. To add to this, pronghorns can run fast. Although each has its speed, a pronghorn can run at a speed of 88.5km/h for about 0.8 km or at 56km/h for about 6 km. Most people rank it as the second fastest animal, after the cheetah.  It is classified as the fastest mammal to exist in the western hemisphere. Unlike the cheetah, it can run at very high speeds for long distances. Zoologists say that this speed is an evolutionary trait that emerged from the need to survive and escape predators such as the American cheetah which is now extinct. While it can run at very high speeds, the pronghorn cannot jump. Therefore, instead of jumping through fences, it will try to find a way under the wall.

To aid their speed, pronghorns have large tracheae and lungs for fast intake of air or oxygen. They also have small digestive tract hence use less energy when running.

They have pointed double hooves, and the front hooves are usually larger than the back hooves. This is because most of the weight is supported at the front while the animal is running. They do not have dew claws.

Another feature that pronghorns have is a distinct white fur on their sides, bellies, rumps and across their throats. From nose to tail, males have a length of between 1.3 and 1.5 meters. They are between 81 to 104 centimeters high from foot to shoulder. Males also have a weight of between 40 and 65 kg. while the females are the same height as males, they weigh between 35 and 48 kg.

These animals have a unique and musky odor. This scent is stronger when they are marking territories. They have a pre-orbital scent gland at the sides of their head which produces this odor. While deer’s do not have a gallbladder, pronghorns do. They also have lighter bones to help them stay light as they run.

Being a herbivore, pronghorns feed on grass in summer and during winter they feed on sagebrush or any other edible vegetation.  This animal is the busiest night and day. It may sleep for a while and eat for a while. They spend up to 60% of their time eating. It is considered an opportunistic forager and will choose from a wide range of plants to eat from. Grass makes up only 12% of their total diet. It will consistently move for long distances each day to find food, especially in the winter when food is scarce.

They have a minuscule digestive tract which helps them stay lightweight during locomotion. It will always shift the food it eats to ensure it gets enough nutritional benefits. When in captivity, a pronghorn will survive on the same amount of food as one cow.

Although the situation of the pronghorn is not endangered, they were near this status a couple of years ago. Because they cannot jump through fences like deer’s can, fences have hindered the migration of pronghorns and thus their survival. Most world life conservations suggest that the last part of a barbed wire fence be left open to allow these animals to go through during their migration. Such actions have helped revitalize their numbers and increase their population.

They are still highly priced at the game, and their meat is considered sweet and plenty. In the recent past, however, governments have reduced the hunting of this animal. It is estimated that there are 1 million pronghorns in the world although there are only 200 Sonoran pronghorns. These animals are threatened by human beings looking for meat and fur, predators, food scarcity and inability to migrate together with diseases such as the blue tongue which can easily spread from sheep to pronghorns.

Just like healthy herbivore animals, pronghorns live large herds most of the seasons especially during winter. However, during spring and summer, females and males live in separate herds. 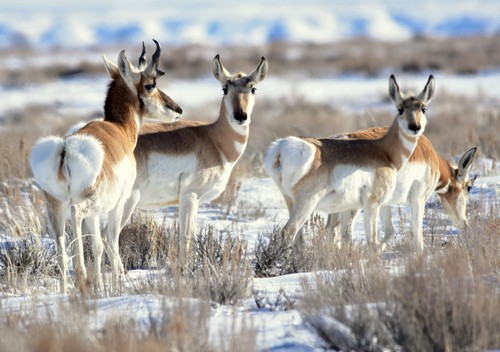 Autumn is the mating season for pronghorns. At this season males forms a harem with females within their territory and the become very aggressive in protecting them to ensure that other males don’t get closer.  After mating, females will carry their pregnancies through until spring when they will give birth to either one or two babies. However, every first time delivery, she will give birth to one baby, and from there she may frequently give birth to twins. The gestation period lasts for 250 days. After birth, the young ones have no odor hence they will lie down motionless instinctively for hours as their primary form of defense from predators such as coyotes, eagles, and bobcats. During birth, the young ones weigh about 12 pounds. Female’s pronghorn takes care of their young ones showing them how to graze and run in the wild until they reach at least one year and therefore kicks them away to find their own territory. The young ones attain maturity age at around 16 months.

Pronghorns are known to nurse their young ones for about one week before rejoining with the herd. However, during this period of about two months, pronghorns suffer a significant loss. Only 40% of the June born pronghorns survives past mid-July. The lifespan of pronghorns varies about their environment. Those in captivity, have an extension of up to 12 years while those in the wild live to a stand age of between 7 and 10 years. 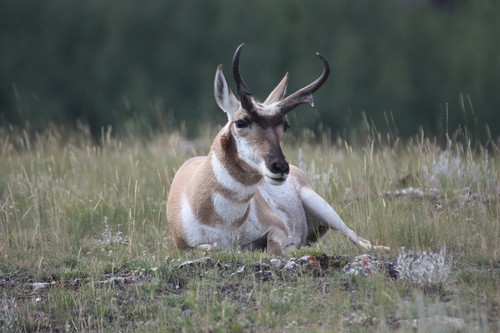 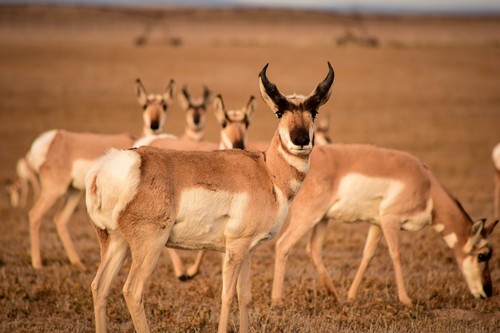 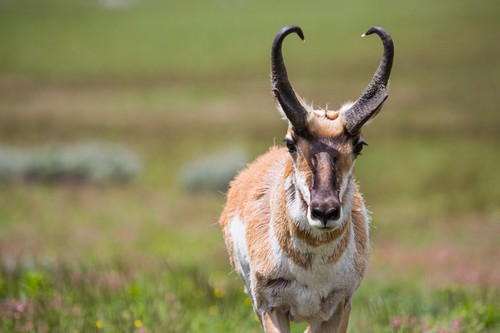 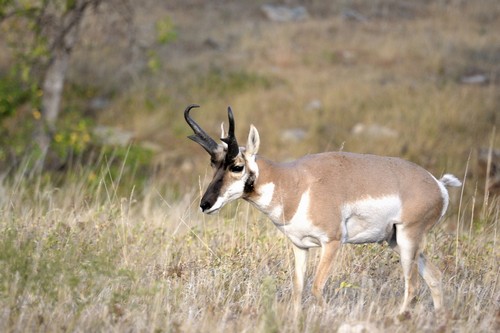 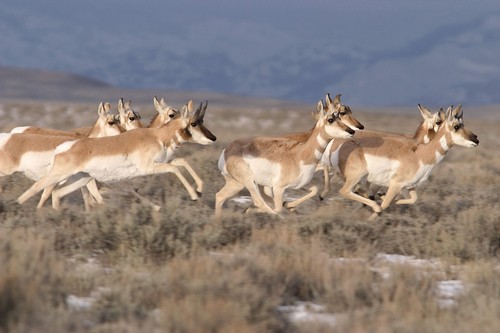 Their character defines the behavior of pronghorns. They can survive in different temperatures and quickly adjust to the environments. They can live well with a range of up to 180 degrees from the desert range of 130 and can go to a level of 50 below zero. Pronghorns are migrating animals, and this is why they have all the ability to ensure that they can survive in different areas as they migrate from one place to another. In a period of one year, pronghorn can cover an enormous area with the help of their ability in speed. On a regular migration speed, they move averagely at 53 kph.  It is highly active around the clock, it combines, and other sleep snatches with vigilant feeding. They are opportunistic foragers and selective in nature. 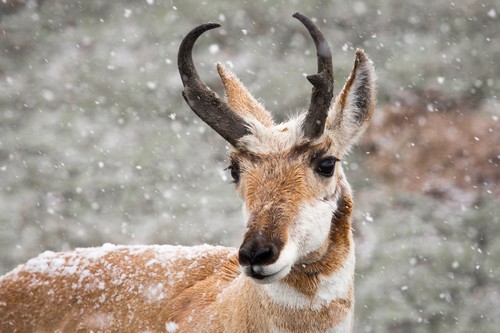 The habitat of pronghorns is brushlands, sagebrush, grasslands and bunch-grass hence the opportunistic nature. The desert favors sagebrush population. With close observation, you will notice that their habitat is strictly in open areas. Therefore, their safety solely relies on their speed and eyesight, which is always very keen in observation and scanning their environment as they feed. They can easily detect movement far beyond to a range of about four miles. When they sense danger, pronghorns communicate to others by contracting their rump muscles that cause their butt hair to stand, and others can see even while two miles away.

Unlike other subspecies, pronghorns cannot jump to heights. For this reason, their migration is hampered, and the population keeps on reducing with time.

Pronghorns display a social life that makes them unique and significant in the wild. They form a herd of mixed sex during winter but breaks early in spring. Young males form their group of bachelor’s, and females from their group. Some females may opt to share the same range with male bachelors. Dominant females displace other females from feed sites aggressively especially when they have formed circular relationships.