The Pomeranian dog is known under different names depending on where it is bred. It goes under such names as Dwarf Spitz, Zwergspitz, Pom, or Loulou. This dog has a very strong personality but only weighs about seven pounds at most. It is a member of the Spitz family of dogs and probably the smallest. The other Spitz members include the Alaskan Malamute, Samoyed, Norwegian Elkhound, among others. Pomeranian dogs are named after Pomerania, a province in Germany.

Characteristics of the Pomeranian Dogs

These type of dog is very loyal to its family and is known to exhibit amazing intelligence. It is an alert dog which is aware of its surrounding due to its curious nature. The Pomeranian dog has a big opinion of itself and can sometimes be found spoiling for a fight with larger dogs.

However, the Pomeranian gets along with other dogs when it is properly socialized at an early age. Its head is wedge-like with ears that are strongly erect. The Pomeranian has beautiful almond-shaped eyes which are full of curiosity and intelligence. This type of dog has a dark nose which can sometimes resemble the color of its coat.

This dog has a distinctive plumed tail which rolls over her back.  The Pomeranian dog comes in different colors such as white, orange, red, brown blue and black. The black color is the most common color for the Pomeranian. It is rare to find a white Pom with colored markings.

Even though the Pom has a small stature, it has a terrific loud bark which makes her an excellent watch dog. It is, therefore, important to train her to control her barking when it becomes too much. The Pomeranian makes an excellent pet especially to old people because it is not an overly dependent animal. However, this dog fares badly in households with little children because of frequent accidents due to her small size.

The Pomeranian is a very fast learner which when properly trained can be able to take command. However, she should be trained with firmness because they will always ignore commands if she doesn’t see firmness in the owner. This type of dog is energetic and loves going for walks to explore its surrounding environment and meet new people. The Pomeranian are usually trained for tracking, agility, and obedience. Furthermore, they are also used as therapy dogs and hearing assistance dogs.

The Pomeranian Husky is a hybrid dog that has different appearances. Its appearance is largely dependent on the amount of DNA that has been contributed to its genetic makeup. They have a mixture of characteristics such as tallness, smallness, eye color variations, and many other variations. Although they have varying physical attributes, their behavior is highly predictable.

The Siberian Husky, which is a contributor of the Pomeranian Husky genetic makeup is regarded as one of the most intelligent and hardworking dogs in the world. They are dogs that were bred as sleigh dogs for pulling supplies in the Siberian Tundra. They were excellent workers because of their high energy.

Their fluffy coats are of varying color shades including red, black, white, and brown. Their coats have two layers which keep them warm. Some of these positive traits have been passed on to The Pomeranian Husky which is playful and has high energy. Its coat is also warm and fluffy including a tail that is shaped like a sickle.

It is rare to find a White Pomeranian because Pomeranians are found in different shades which are more dominant than the white color. In order to produce a White Pomeranian, the focus should be directed to combining two white breeds with a dominant genetic which is very hard to find. This should be done where no other color should appear for at least five generations.

There is a great chance of producing throwbacks when one attempts to do too much white to the white breeding of Pomeranians. Throwbacks are Pomeranians which are larger than the normal size expected. The colors need to be slowly bred out. The orange color is regarded as one of the hardest colors to breed out as it produces other shadings before it is completely bred out.

For a Pomeranian to be officially branded as white it must not have any other coloration apart from white. It is possible to produce white litters when one breeds white on white, however, the texture and quality of the fur is greatly compromised. 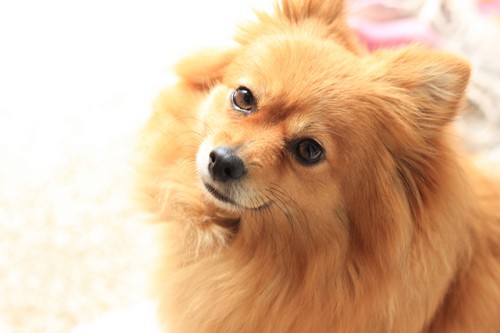 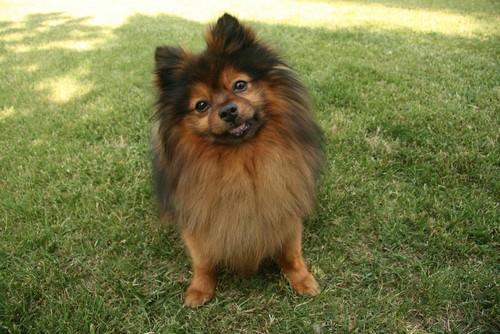 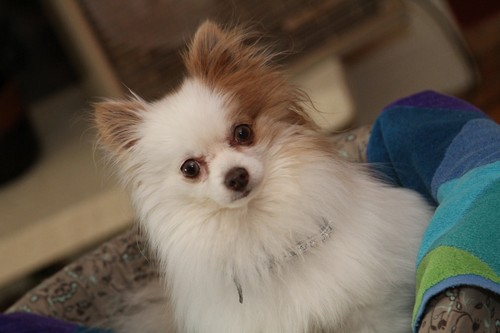 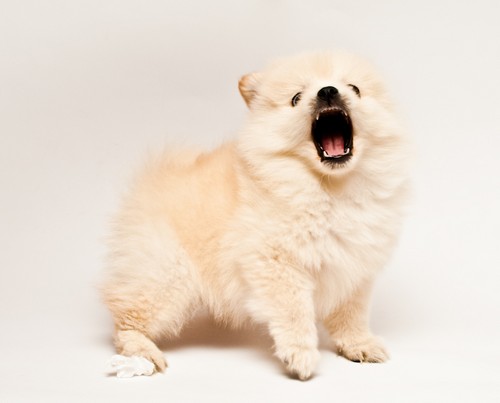 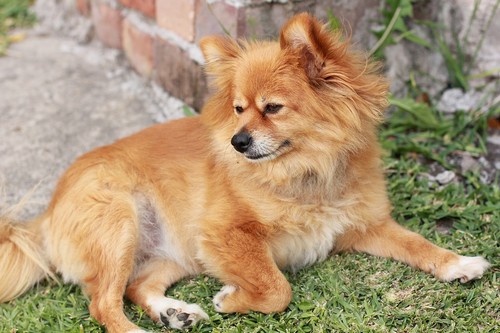 The Black Pomeranian is common and very popular with most dog breeders. These are dogs which are known to be small sized and reach heights of about 12 as adults. They weigh about 7 pounds at most. However, their small size does not mean that they lack the genetic characteristics of being large dogs which are in their genetic makeup ancestry.

However, there have been cases where the Black Pom have been reported to produce large sized puppies which grow to weigh about 14 pounds. Regardless of their small size, the Black Pom are known to be excellent companions to families that have children.

How to identify a Black Pom

It has been observed that novice breeders do sometimes confuse the characteristics of the Black Pom. Many are unable to correctly identify a true Black Pom. Many of them wrongly assume that a Black Pom is black, However, this notion is wrong on a technical aspect because the Black Poms are originally and genetically light-coated dogs. 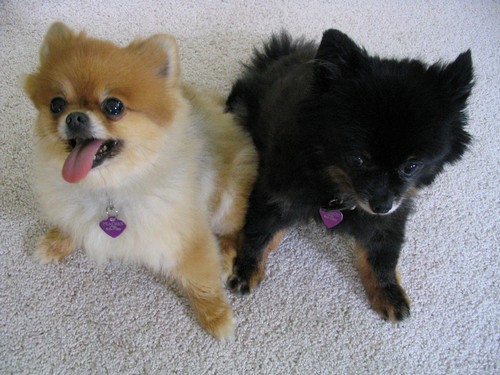 A true and genuine Black Pomeranian is a dog that is completely black in color without any other color pigmentation. They also have the black pigmentation on their skin which includes on their paw pads, nose, lips and eye rims. It is, therefore, good to know that a Black Pom has a uniform black coat. They look like black-painted dogs which have no iota of any other color.

Black Pomeranians stand out from the rest of the Pomeranians. They are dogs of small stature, black, with almond-shaped eyes. They have fox-like faces with a body that is completely black colored from head to toe. The black Pomeranian is a small dog with a big ego and this affects their socialization. They are usually known to have problems with larger dogs.

This dog needs to be groomed differently from the rest because of the type of dirt it carries around on its coat. It is obvious that dirt and grime show up on white and cream colors more than that found in a dark color.

Lighter elements and lint are the most common debris that is found on the coat on the dark-coloured Pomeranian. It is, therefore, advisable to schedule the grooming depending on the type of activity the dog is undertaking and also the environment in which it is spending time in.

It is, therefore, good to groom your Black Pom regularly if it is active and plays a lot. When it comes to shedding, it is important to know that all types of Pomeranians shed off their furs in equal measure.

Black Pomeranian shed off fur will always show on light colored rugs, furniture, and floorings. Your Black Pom is a moderate shedder which does not require a lot of grooming. However, the Pom’s fur should be brushed at regular intervals to avoid tangles and make the fur to have a shiny appearance.

In summary, Black Pomeranians are the same as the other types of Pomeranians both physically and temperamentally, the only difference between this types of Pom with the others is only its coat and skin color.

General temperament of the Pomeranian family

Pomeranians are affectionate and loyal animals and this temperament makes them be liked by many breeders. They always require human company and sometimes this can be irritating. They are susceptible to stress and anxiety when they are not involved in family activities. They, therefore, need lots of exercises to avoid stressful situations.

Pomeranians get along with each other as well as with humans and other animals. They are playful and happy dogs which are active and have a liking for cuddling. 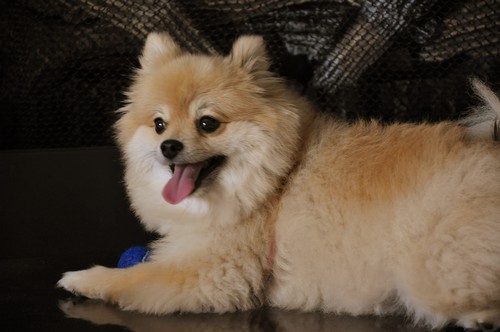 Despite their small stature, the Pomeranian is a brave little dog that does not fear to confront larger opponents. They are perceived to have the so-called ‘Small Dog Syndrome.’

It is quite strange to picture the Pomeranian acting as a watchdog due to its small stature. Nevertheless, the Pomeranian is an effective watch dog due to its confident temperament and the tendency to protect its own territory which makes it alert you of the presence of strangers. They need to be socialized early in life to make sure that their cautious nature does not transform into suspiciousness which can, in turn, lead to aggression.

Due to their intelligence, agility, and curiosity, Pomeranians can be used to perform various tasks including acting in circus shows. It requires patience to train them well because of their stubbornness and tough-headedness.