Peacocks are one of the most beautiful and elegant birds from around the globe. With species that are relatively easy to reproduce and maintain these formidable animals can be seen virtually worldwide despite originating from a very particular region of the world. Today, we suggest you learn some interesting facts about peacocks you probably didn’t know.

Before delving into the mystery and be amazed with the peacocks, following are ten short facts about peacocks that are really fascinating and will definitely whet your appetite to know and learn more about them.

Some additional bizarre and detailed facts about peacocks are as follows:

The mountains prevented its natural expansion

The Indian blue peacock is originally from India, Sri Lanka, and other nearby areas. As a bird with low flying capacity, the huge mountains of the region were an impediment to being naturally expanded beyond these lands. Arakan hills prevented its natural progression to the east, while the Himalayas and the Karakoram mountains blocked their northward expansion.

It is one of the largest flying birds

Peacocks are not just birds that stand out for their inability to fly, although, this does not mean they do not do it at times when they need to flee their predators, like tigers, or to climb the canopy of large trees of the forest for sleeping. Given that the male specimens can be measured from head to tail just over 2 meters and weigh up to 6 kg, this makes them one of the largest flying birds in the world.

There are totally white peacocks

While albinism is present in this species as well as in many others, you should know that not all white peacocks are albinos and characterized by having brown eyes. It is because of genetic mutation that resulted to absence of pigments into their plumage.These peacocks are highly prized for its extraordinary beauty and are highly demanded in luxurious gardens and zoos. A colorful peacock with an open tail is without a doubt amazingly beautiful but a white one in the same pose is an impressive sight to behold.

The singing Peacock is one of the features that attracts the most attention to this bird but not by being melodious and pleasant, but rather the opposite. Looking for peahen to mate, aside from raising their vibrant and colorful feathers, the male peacock can make or produce a fake copulatory sounds to attract peahen and to show as well that he is sexually active and more suitable than any other peacocks.  All language that is still being studied by scientists!

Peacocks are excellent bio-controllers of many species of insects, worms, and other animals but especially, highly venomous snakes such as cobras. So much so, that in Sanskrit, the name of this animal means “murderer snake” and is highly admired since ancient custom and that has made it a bird often revered by the native cultures.

The beautiful plumage of the peacocks is not present when they are born. Males do not begin to develop their colorful feathers until about three years old.

They can fly, despite having a huge tail. Though the peacocks fly low and not too far, they fly in a very graceful manner. In the medieval times, the peacocks were a coveted and exquisite dish. However, although they look beautiful, it is said that their taste is not that flavorful and delicious.

They are very intelligent animals

These birds are not only pleasing to the eye; they are also intelligent as many studies show. The male peacocks give out calls to seduce the female peacocks when it is time for the mating season.

Why do the feathers of the peacocks shine?

If we talk about birds, we know that there are many varieties of them, in many shapes, colors, sizes, types, and each have their own habits, customs, and natural environments in which to live. One of the birds most admired by the whole world is undoubtedly the Peacock. Find in this article, all the information you need to know about it.

The Peacock is perhaps one of the most exotic animals and is admired by the whole world, because of the spectacular tail that astonishes everyone.

Peacock is the national bird of India. They are considered very sacred in India and the god Kartikeya, the son of Shiva and Parvati, is shown mounted on the back of a peacock; hence, the significance of the peacocks in India is huge. Greek mythology explains why peacocks have eyes on their feathers.

Peacocks are strong creatures. They have eleven different calls and the males are very vocal. A call sounds like “may be impressive, May-awe”, according to the San Diego Zoo, and brings a long distance call to other peacocks. It is used in the early morning, early evening and during the rutting season. In nature, the sound works well when peacocks are ready to save themselves from predators such as tigers. Peacocks have a good view and relatively produce strong call.

Peacocks are birds that strictly follow routines. They tend to follow the same calendar day after day. The birds roost at night in large groups in tall trees to protect themselves from predators. In the morning, the peacocks are divided into smaller groups. A typical day includes a peacock foraging for food, such as wheat, insects, and small mammals, preening and resting in the shade. At night, the peacocks eat, drink water and again roost in tall trees. 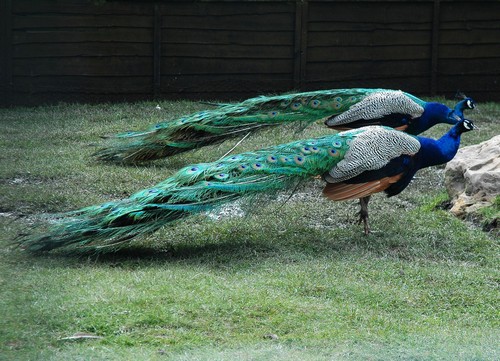 The actual male peacock is polygamous. A successful male peacock can have a harem of up to five mates. During the mating season, males group together and establish breeding territories next to each other called leks. Visiting females, the males decide who to choose as their companions. After mating, the males and females separate. Peahens lay 3-6 eggs hidden in the vegetation and peachicks hatch after 28 to 30 days in the nests. 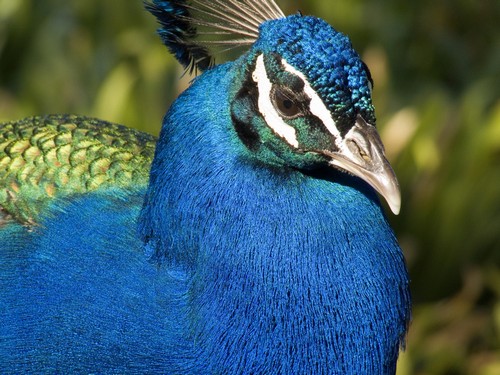 The peacock is a very territorial bird, flying a little and low as it only flies to climb a tree where it can remain quiet and at peace for the night.

The male peacock in adulthood can weigh up to about 5 kilograms, while the adult female reaches an estimated weight of 3 kilograms. Likewise, the male peacock can measure up to nearly two and a half meters long, while the female, only half.

Their life expectancy is about 15 years; however, recorded cases show some to be over 20 years old.

There are differences in plumage and color between the male and female Peacock. The former has a blue plumage on the head and around his beautiful tuft of feathers blue and green colors, which unfolds in circumstances where it wants to defend, marking his territory, and even to attract the females. As the plumage changes in the autumn season, the male is left without this attraction. It should be noted, however, that feather fan is not the animal’s tail, and the tail usually goes unnoticed. The female meanwhile is characterized by an ashen plumage, white with some green hues near the neck. Both generate a particular sound, similar to the meow of a cat.

The feeding of these birds is Omnivorous as they base their diet on seeds, plants, fruits, berries and sometimes frogs, small reptiles, and insects. 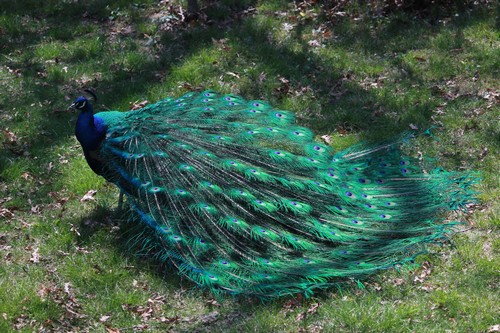 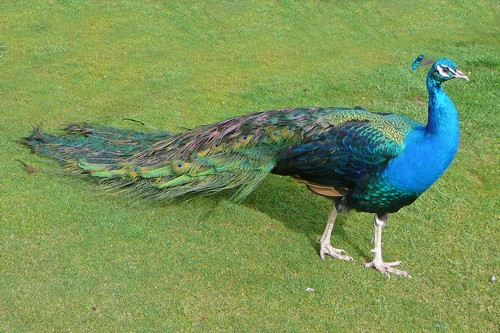 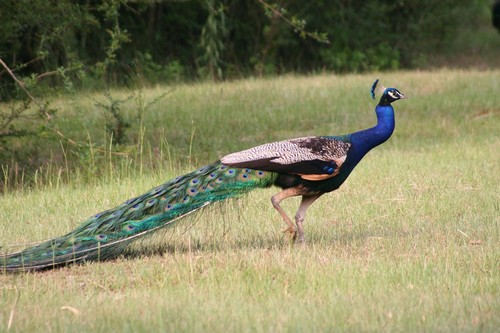 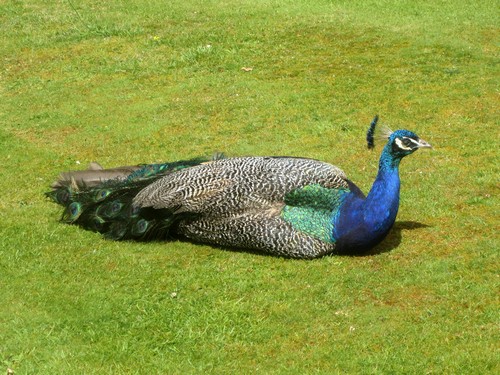 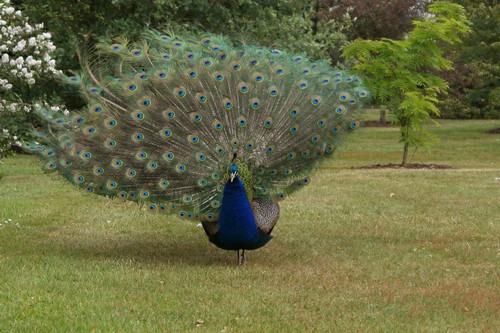 In breeding season, the male peacock opens its magnificent tail and emits a characteristic sound to attract the females. After mating  which usually happens during the month of July, the female makes a nest on the ground which is sandy, where she can place 4 to 8 brown eggs, which incubate for a period of approximately 28 days, which are born calves devoid of feathers.

In summary, Peacocks are absolutely enchanting and mysterious birds that will surely delight and captivate everyone with their myriad colors, fascinating and beautiful good looks.