The Oryx, known scientifically as Oryx gazelle, is a type of antelope, large in size and they are found in the Middle East as well as parts of Africa. There are four species under the oryx name and these include the Arabian oryx, the East African oryx, the Gemsbok and the Scimitar oryx.

The Arabian oryx is the smallest amongst the four species and it went extinct in 1972, in the wild and the only ones that could be found were the ones in captivity. However, they have been introduced into the wild in some locations such as in Oman, the Sir Bani Yas Island, Bahrain, Jordan and Saudi Arabia.

The word oryx is derived from the Greek language. It is estimated that there are about 10000 oryx in the wild while there are about 7000 that are being held in captivity.

The oryx is an antelope that has actually adapted to live in harsh conditions found in arid and semi-arid areas where there is intense heat, little water and scarce food.

Characteristics of the Oryx

The horns are used as weapons, for defence and they are made up of keratin. They continuously grow throughout the lifetime of the orynx. They are useful in keeping away predators and there are cases of orynx killing lions using their horns.

The horns can grow to be as long as 30 inches long, and are narrow with a ring pattern.  The horn is straight for all oryx apart from the scimitars oryx that has long horns which are curved towards the back. The oryx has a short mane on its thick neck and their bodies are muscular which helps them to run fast. Some species of oryx can walk for quite a long distance, walking up to 70 kilometres in one night.

Another distinct feature for the oryx is the beautiful markings that they have on their backs, on the legs and on their facial area. They have black markings on the face, which look beautiful since they contrast the rest of the face which is white in colour.  The markings spread further down to the throat and the chest as well as along the back.

They have distinct forelegs which have white and black rings that are located just above the knee. Since they live in hot areas, their coat which is light in colour helps to reflect off the heat of the sun.  This therefore helps them to stay cool.

The Arabian oryx however is uniform white in colour and their stripe on the flank may be faint or absent altogether.

The Habitat and Behaviour of the Oryx

Oryx live in areas that are dry and hot, preferring to inhabit areas that are either deserts or semi deserts and they are adapted to living in such conditions finding most of the nutrients and water they need in the little vegetation that they eat. This enables them to live for up to 20 years while in the wild if they do not become victims of predators such as lions.

The oryx that are not territorial will live in large herds and a herd can have up to 200 members, although on average they usually have up to 40 members. In non-territorial herds, the males, females and their young all live together in one territory.

Herds are usually led by the most dominant male which is usually the eldest male. Dominance is decided by fighting and fights can be deadly considering that they have long straight and sharp horns. However, once there is a well-established hierarchy, fights occur less often.  Instead of fighting, dominant males will use rituals to show their dominance. This will include prancing walks and gallops as well as lateral displays. Only when two males that are evenly matched are involved, that is when horns may clash. 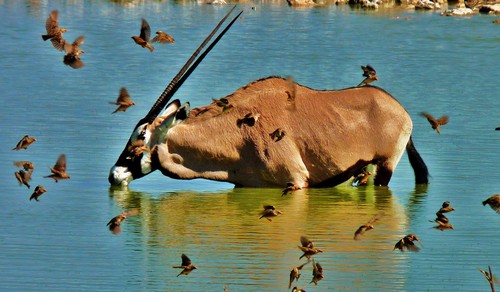 The herd will move slowly within their range and will often follow the rain, going to where rain is so that they can feed on the vegetation that is growing. Therefore, they have a strong sense of smell which enables them to follow the rain and to know which area is experiencing rainfall.

The Diet of the Oryx

In their dry and desert or semi-desert habitats, oryx survives by feeding on thorny shrubs as well as available grasses. The plants that grow in this area are adapted to the harsh conditions and will therefore retain a lot of water as well as collect due. This leads to some of the plants having a high water content and therefore when the oryx feed on them, they get food as well as water required by their body. 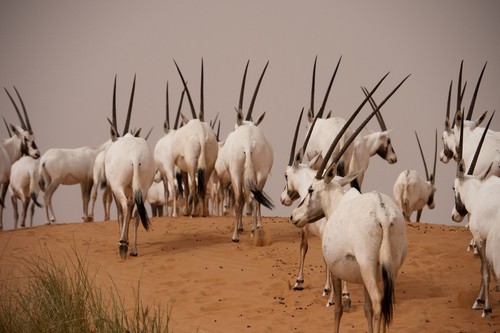 Oryx will also eat wild melons and tubers that they may dig out of the ground as well as plants that have thick leaves so as to get additional supply of water. If water is available, they will drink, however they are adapted to staying for long periods without drinking water and they can stay for days and weeks without drinking any water. Their kidneys are well adapted and they do not allow a lot of water to be lost through urine. Furthermore, oryx will only sweat when the temperatures go above 46 oC.

Due to the hot sun during the day, oryx will feed mainly in the late afternoon as well as early in the morning before the sun becomes too hot. Occasionally they will feed at night as well when there is enough moonlight to enable them to see well.

Oryxes have no particular breeding period of a year and they can breed at any particular time of the year. However, the rains will influence the period of conception and as such most females will give birth in the period of December to April. It is the most dominant male that has the first chance to mate with females before the other males get to do so.

When the female becomes pregnant, the pregnancy will last for a period of between 8 to 9 months when one calf is born. Once a female oryx gives birth, she enters a new oestrous cycle.  A calf will weigh about 10 kilograms on average when born and once born it will stay hidden for up to 3 weeks, with only the mother visiting it so as to feed it up to 4 times in one day.

They calf is born without any markings; however, the markings develop as the oryx become older. They suckle milk from their mothers until they are 9 months old, reaching sexual maturity at 2 years old. When the males reach a certain age, they leave their natal herds and go join other herds. 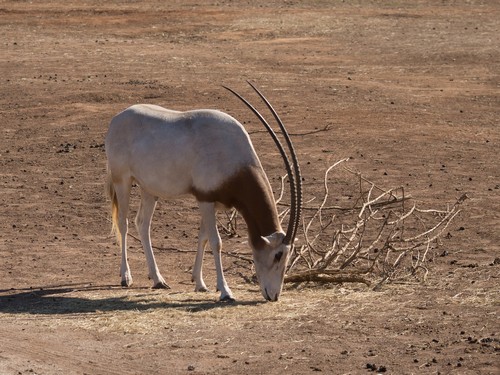 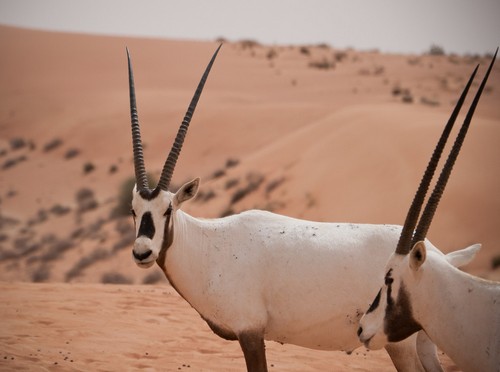 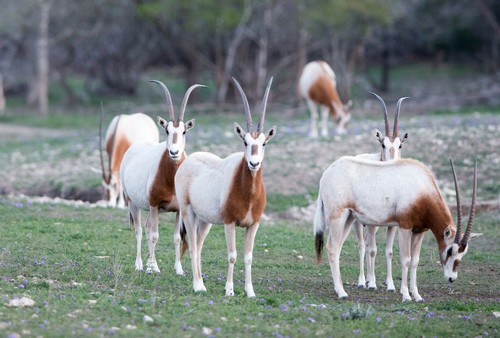 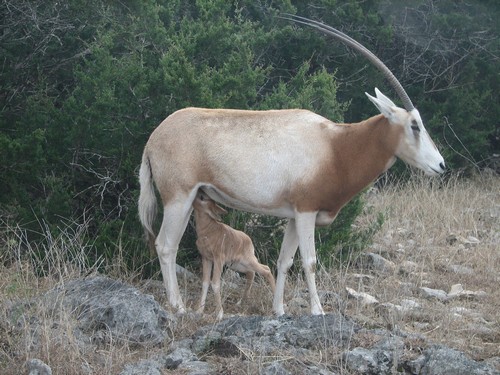 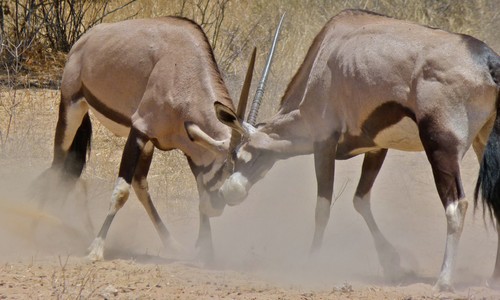 Conservation Status of the Oryx
There are numerous oryx that live in the wild, however for the scimitar oryx; it is listed as extinct in the wild, with surviving populations being found in captivity. They used to live in the Northern parts of Africa in the wild and there are programs that have led to them being introduced back into the wild especially in Tunisia.

The other species are also being kept in captivity as well, so as to ensure that there are conservations that will ensure these species are not extinct totally even if they do go extinct in the wild. Since oryx live in dry areas, there population is highly affected by drought because whenever there is a drought, the food available greatly reduces.

Habitat destruction also affects the population of the oryx greatly. With reduced habitat, there is reduced territory for them to move in such of food and water. Climate change further complicates things due to having unreliable rainfall and unpredictable weather patterns.

Apart from these predation is also a major threat for oryx and the main predators includes the lion, wild dogs as well as hyenas.