Orangutans are very unique species among the great apes in the wild. They are considered the closest relatives to man, in terms of DNA, and they have been discovered to share almost 97% of the same DNA with humans. They are the largest tree living mammals in the world, and spend most of their lives in trees.

Orangutans are very large tree-swinging animals, but they are smaller than gorillas. Male orangutans are much larger than the females, and weigh almost twice as well. A mature male could weigh up to 260 pounds, while a full grown female could weigh about 100 pounds. Male orangutans have large cheek flaps, and these cheeks get even larger with the animal aging. The cheeks are believed to act as a megaphone, by amplifying their vocal communications. The cheek flaps also serve to make the apes look more menacing while making threats. They also possess throat sacs, which helps extend their vocals, up to as much as half a mile away.

The orangutan’s body is designed to aid its treetop lifestyle. They possess very long arms, almost twice the size of their legs, and their arms could extend all the way to the ground when they are standing. They have strong muscles supporting their arms which help them swing from branch to the other efficiently. They are built to be very flexible, and they do not possess hip joints in which the femur is fused with the pelvis. Instead, they have a fully rotatable joints, and their legs can move at any angle, similar to the way the human shoulder joint can rotate.

They do not have tails, like other great apes. They possess a similar dentition to humans, and have 32 teeth. They have also been discovered to possess large cerebrum, the part of the brain which controls tasks like movement and posture.

Orangutans, unlike other apes, are solitary animals. The male Orangutans are loners, and will go to the extent of making loud vocal noises, which can be heard from up to a mile away, while moving through the forest, to make sure that other males stay out of their way. Mothers and their young ones however, share a very strong bond, and young orangutans could stay with their mothers for up to seven years before separating. Orangutans are known to live for a long time, and some of the animals in captivity have lived for up to 60 years. They have great abilities in climbing and moving around the forest canopy. They build their nests very high up in the trees, sometimes as high as 100 feet off the ground, and are very much adapted to feed and travel without really needing to come down to the ground often.

They are very intelligent animals, and have been seen using tools to feed or to fend for themselves. During very heavy rainstorms, orangutans will usually build umbrellas using big leaves to cover themselves. They also use sticks to forage for food, such as while fishing for termites in tree hollows.

Orangutans spend a major part of their days resting, feeding and travelling on tree tops. They begin their day by foraging for food for about three hours in the morning, then at midday they rest, long into the evening when they begin to prepare their nests for the night. Orangutans do not have many predators due to the heights at which they reside. The tiger is their main predator, and in areas where tigers do not reside, such as in the Borneo highlands, orangutans spend a lot more time on the forest floor, than in other places where tigers could be found.

Orangutans feed mostly on leaves, flowers, bark, some insects, and mainly fruits. They are known to consume over 300 different varieties of fruits. It is believed that orangutans study and know the fruiting cycles of many trees, and thus they can decide on which tree to build their nests at each particular time of the year. Mothers also teach the young ones where to find fruit and what are the fruits to eat and avoid, and how to process it as well.

Their diet varies from month to month, depending on the fruits that are ripening at that time. They eat mostly ficus fruits, fruits with a lot of sugar and pulp, which are easy to digest. Studies have shown that orangutans could feed on up to 11,000 calories per day in high fruit seasons. In low fruit seasons however, they complement for the unavailability by feeding on barks, leaves and small insects, and their daily intake could reduce to as low as 2000 calories per day.  Due to their voracious feeding, they are known to be fruit dispersers for some plants, and are not affected by plants containing toxic acids. Sometimes, orangutans eat rocks, and this is believed to add mineral nutrients to their diet to help avoid diarrhea. Most of their diet can be found on tree tops, and rain water serves as their source of drinking. During periods of low rains, they chew leaves into sponge-like materials, and then use these leaves to collect water from tree cavities to drink.

Orangutan males become sexually mature around the age of 15. They also begin to develop the cheek flaps around this age. Not all males develop these cheek flaps fully, and while the ones with developed cheeks are called flanged males, the orangutan males without cheek flaps are called unflanged males. Both kinds of males have different ways of mating with females. The females are more attracted to the flanged males, while the unflanged males will often force females into copulating with them. Female orangutans become mature and able to bear offspring between the ages of 14-15 years. Their gestation period lasts for nine months, and they do not get pregnant again for up to eight years. This gives them enough time to raise their infants. This eight year inter birth interval is the longest spacing interval among the apes. 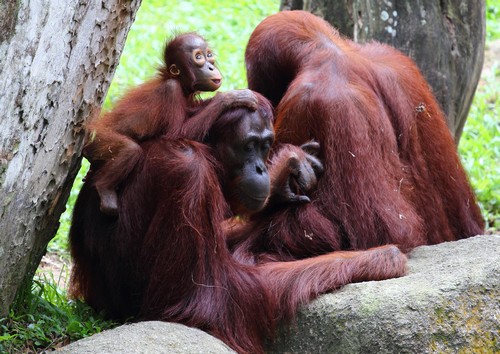 Female orangutans often give birth to just one infant, and twins are a rare occurrence. They normally give birth in trees high up in the canopies of trees, in nests carefully built to accommodate the weight of the pregnant females. At birth, infants are very small, and could weigh about 1.5kg. They are born with very large eyes, sparse body hair and very tiny hands and feet, which will begin to develop when they start climbing. Male orangutans do not take path in raising infants. Young orangutans will cling to their mothers for the first two years, and their mothers carry them around, feeding and grooming them, as well as sleeping in the same nest.

By the age of two, young orangutans begin to climb and travel in trees among other orangutans. Orangutans take the longest time to grow from infants to adults among other apes, and females will only have about three to four infants in a lifetime. This makes the competition for females very fierce among males, and also makes the population growth of orangutans very difficult. Female orangutans remain fertile and reproductively active up to 30 years. 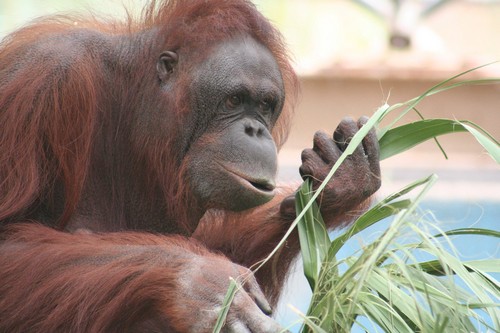 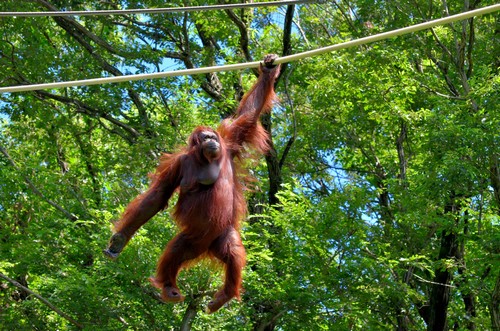 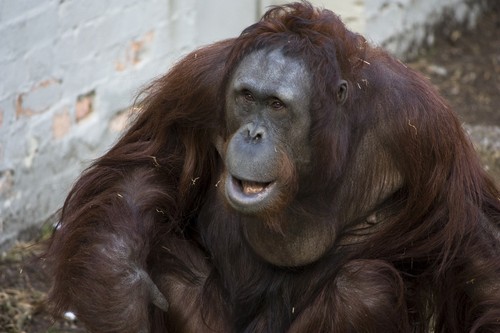 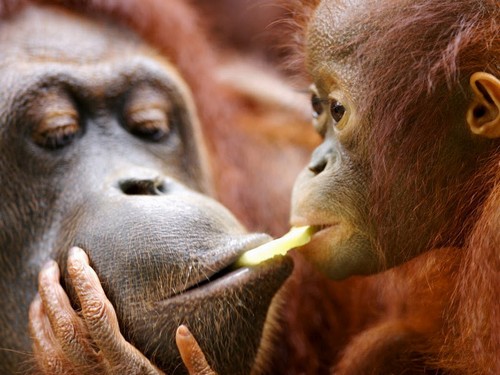 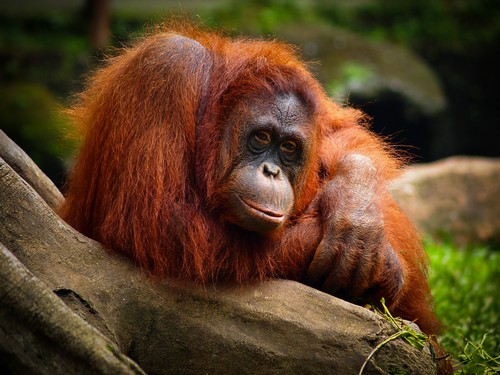 Orangutans are faced with a huge threat of extinction due to a lot of issues, such as habitat loss due to logging and deforestation. They also suffer from a variety of human illnesses and diseases. Forests are continually being cut down and cleared for building and agricultural purposes. The orangutan habitat is being divided into more and more tiny fragments, which makes leads to reduced food sources, and increases the amount of human conflicts with these apes.

The rainforests which are homes to the orangutan species also contain large reserves of palm oil plantations. These trees are continuously logged, with occasional forest fires which endanger the lives of orangutans in the area. The sale of infant orangutans as pets has also become a highly booming business. Female orangutans will often protect their young ones aggressively, and when these poachers attempt to take the infants away, the mother will often resist and will eventually get killed. Many of these infants sold as pets will eventually die, because infant orangutans hardly survive for long without the help and attention of their mothers. 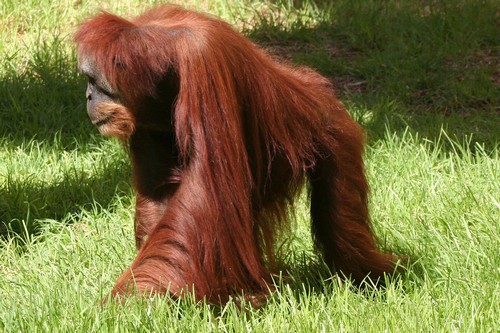 Bornean orangutans have been listed as endangered species, while the Sumatran species are listed as critically endangered. According to the Orangutan Conservancy, just about 40,000 orangutans remain in the wild. There are a number of organizations set up to support the rescue and rehabilitation of Orangutans. One of the largest, the Borneo Orangutan Survival Foundation, has been rescuing and reintroducing orangutans into the wild, with projects such as the Nyaru Menteng Rehabilitation Program. There are also discussions to set up conservation areas in palm oil producing areas. To save these intelligent red apes from going extinct.