If you have wondered or still wonder what kind of animals the cute little mousy Crash and Eddie in Ice Age are? Or you know but would welcome more information on them. Well, you are in luck because this article is about them. Whilst most of their mammal colleagues easily faded into extinction, these animals have survived the ages.
So, before you assume that Crash and Eddie are not real animals and that they don’t exist, think again!

Opossums or Possums are small, four-legged mammals of the Marsupialia infraclass. They have interesting physical features which we will soon explain. Possums belong to the largest order of marsupials in the Western Hemisphere, with 19 genera and numerous species. The possum family, Didelphidae, is the largest family of marsupials in the Americas and the only family in order Didelphimorphia; it represents 19 genera and 95 species.

Didelphimorphs have the ability to stand with their feet flat on the ground and the feet of the hind limbs have opposable digits with no claws. Opossums have prehensile tails like monkeys (their tails are adapted to take hold of and clasp objects by wrapping around that object). All marsupials have fur consisting of awn hair only, and the females have a pouch called a marsupium. Didelphimorphia means a creature with two wombs. And this can  actually apply to all marsupials.

Opossums ultimately look like rats or raccoons and are most often mistaken for one or the other. Most opossums that have been spotted are about 1/18 of the height of a 6ft. tall man (4 inches), therefore, they are really small and about the size of a mouse. When measured from the tip of their nose to the tail end, they average a length of about 2.5ft.

Opossums are really small and tiny and can be observed to have a mass of about 8.8 to 13.2lbs.

How they carry out respiration is quite similar to the way most mammals do it. Opossums are mammalian vertebrates and therefore possess a pair of lungs. They respire by breathing in oxygen and exhaling carbon dioxide and vaporized water through their nostrils.

Like bears or humans, possums approach feeding the omnivorous way; consuming both plants (like an herbivore) and meat (like a carnivore). By plant, we mean plant parts like leaves and fruit. However, the amount of meat or plant one opossum can consume or consumes depends on the different species, just like dogs (I say this because I have caught my dog many times chewing on the grass on the lawn).

Opossums are generally small and cannot participate in major predatory action, so, they mostly depend on kills made by bigger predators or meat from animals who died by natural causes (scavengers).

The rate of growth is decidedly accelerated in the first formative periods of their life. Typically, they would have a growth curve similar to that of their rodent cousins.

Most opossums may not, however, grow to a length more than just a couple feet. The younger possums may possess a higher length to width ratio up till when they can hunt for themselves.

A biological phenomenon known as sperm pairing takes place in the spermatozoa of opossums. This means that their sperm cells exist in pairs. They, however, exist in such a way that it is possible for them to move freely in the female’s ovum without obstruction.

If you think you have read it all when it comes to opossum facts, you need to consider the ones that follow in this section of this article. Summarily, these are the top interesting facts you should know about Opossums:

In the southern parts of the US, opossums are sometimes hunted as food.

At one stretch, an opossum has the amazing ability to produce about 20 babies. Considering their small body sizes, this is an awesome fact worth noting.

Baby Opossums are born as helpless and tiny as honeybees and are protected in a pouch on the mother’s abdomen like Kangaroos.

In at most, 130 days after birth and exclusive parental care, the newly born opossums stop feeding on their mother’s’ breast milk. It is at this point that they crawl away from their others’ pouches and begin to lead their own lives.

As the opossums develop and grow larger, they sometimes ride on the mother’s back as she hunts for food and they will go in and out of the pouch. 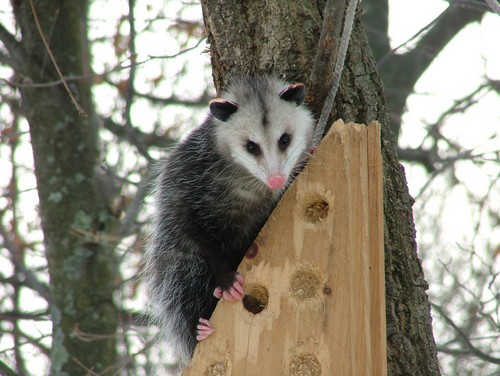 Opossums are omnivores. This means that they get to eat everything we can eat and more. So, if you have a pet possum, don’t hesitate to feed it chocolates on Valentine’s Day or turkey on thanksgiving or chicken on the day of Christmas.

Opossums are scavengers, and they usually go to settlements or people’s’ houses to raid dumpsters, garbage cans and other containers. So next time you hear weird noises in your refuse disposal bin, think twice before you scream rat.

As a rule, every opossum in existence is an omnivore; eating both flesh and leaves or grasses. However, they all do not consume the same degree of these substances. While some species incline more to carnivorous nutrition, some others prefer the green food.

If you think you have heard all the facts about opossums, then you just have to read further. These interesting animals have a powerful immune system that has many natural snake antivenom. Opossums have a natural defence system against the toxic effect of snake venom whether it is a rattlesnake or a viper; creatures whose venoms could kill humans in the absence of intervention. So, no need to get worried about your pet possum suddenly dying on you or biting a strange disease into you.

Generally, Opossums have undergone impressive evolution over the past centuries of existence on earth. Since their natural habitat ranges from trees to human homes, they have adapted adequately. This, notwithstanding, some of them are adapted to life on ground which – in unfavourable conditions such as loss of habitat – becomes their home.

The yapok (Chironectes minimus) is strangely unusual, as it is the only living semi-aquatic marsupial since most opossums live on land, using its webbed hind limbs to dive in search of freshwater molluscs and crayfish.

Their tails are prehensile. This simply means that they can use it as a sort of tool to grip tree branches or stems as they navigate from one branch to the other.

Opossums have an unusually full jaw, by mammalian standards, with a total of 25 teeth in both jaws (13 in the upper and 12 in the lower jaw).

Opossums usually live for a very short time, for a mammal of its size, usually only two to four years. Aging process is comparably rapid. 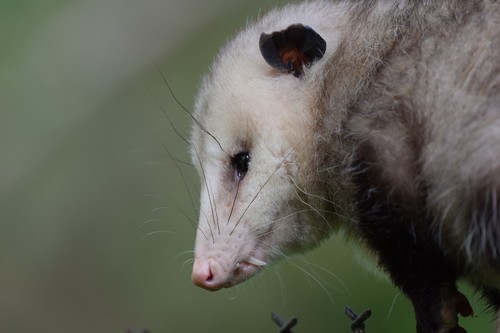 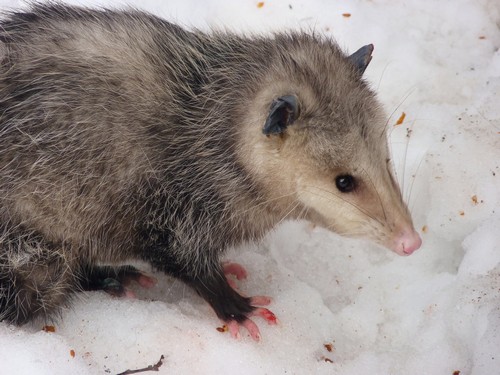 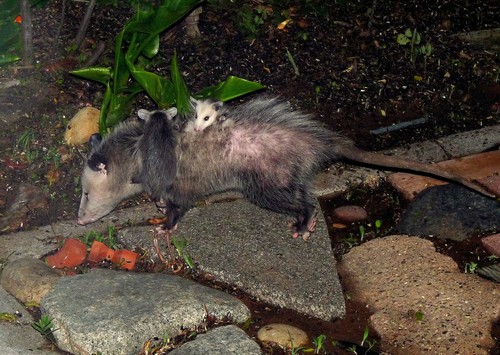 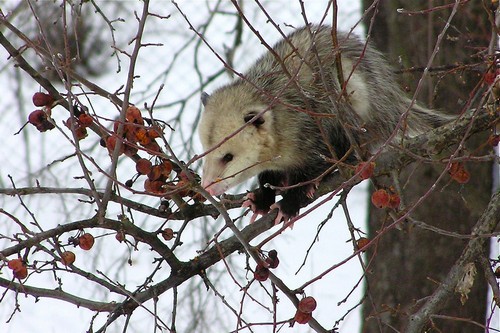 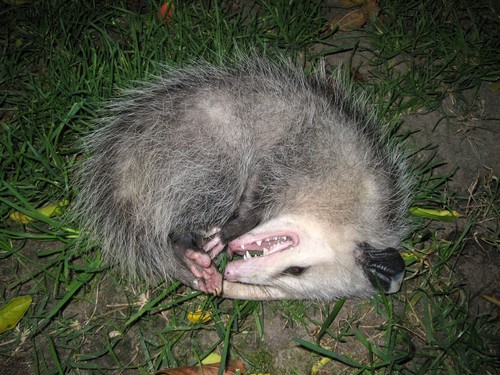 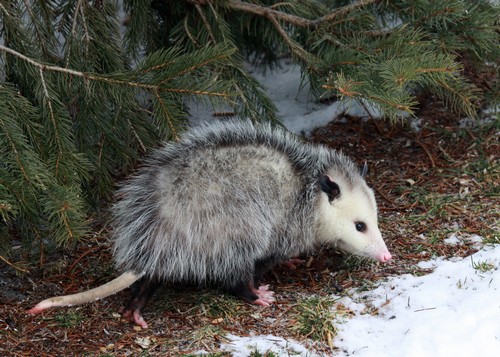 Every animal knows a thing or two about adaptation, and the opossum is not an exception. They are well Known for a solitary and ever fast flowing lifestyle, opossums are often found living in an environment so long there is a constant supply of food. Opossum families normally live together in groups in homes called burrows or sometimes under wooden structures in other people’s homes.

.The most noted feature of the opossum is its ability to ‘play dead’ the moment a threat is perceived especially when a natural predator approaches. They would behave like an animal that is dead or unpalatable to eat. This trait is known as playing possum and is an involuntary physiological response (like fainting). Large predatory birds who prey on possums, snatching them from the ground or tree branches for food, are easily deceived by this special defence mechanism.

They would fall to the ground, secretes some foam around their mouths and keep their eyes half shut. This makes them assume the posture of a dead animal. All these, in addition to the furry coat of most marsupials act as protection against adverse weather and climatic conditions. The fur made of awn hair is very sensitive and will stand on end, forming enclosed warm air pockets, when cold.

Opossum farms are operated in the US. Opossums attack have long been part of the fur trade. On the IUCN red list, the opossums are assessed at an LC level (least concern) and maintains that the species are adaptable to human dominated landscape and has not been adversely affected by human settlement. In fact, its range appears to be expanding despite the fact that it is being hunted and trapped locally for food and for the fur trade. To know more about opossums, do well to read more on marsupials and follow up on National Geographic.