Very few people know about this animal and even those who have seen it will probably think of it as a type of a horse. However, the okapi is actually a relative of the giraffe, with both of them being the only living species of the Giraffidae family. It is rarely seen and some will say that it is good at hide and seek.

This beautiful animal is a national heritage for the Democratic republic of Congo, being a national and cultural symbol as well. They were first announced by scientists in the twentieth century, however before this was done, most Europeans thought that the animal was a myth since they heard tales about it but never saw it.


It is one of the oldest mammals on earth and it is thought that the modern giraffe evolved from the okapi. With the scientific name, Okapia johnstoni, it is tall, with a height of 5 feet at the shoulder; however the females are a bit taller than the males.  The average weight ranges from 200 to 350 kilograms.

In terms of appearance, the okapi has a reddish brown coat, while the legs have white horizontal stripes and rings; however the ankles are white in color while the chest and throat are whitish grey in color. This coloration works to camouflage the okapi in the dense forests, with their main predators being leopards in the wild and human beings who hunt it for its meat and skin.

It has a walking style similar to that of the giraffe with the legs on one side of the body going forwards simultaneously as opposed to moving alternate legs. Furthermore, they have long, dark tongues and the males have ossicones, covered in skin, on their foreheads.

Some weird facts about the okapi include the fact that they have stinky feet and they can lick their own ears with their long tongues. Moreover, they can communicate with each other using infrasonic sound which cannot be heard by human beings and this is quite useful for mothers to communicate with their calves without being detected.

Okapi has a walking style that can make you to perceive them as being lazy, however they can run fast with a top speed of about 60 kilometers per hour. The common ancestor of the okapi and the giraffe is estimated to have existed about 11 million years ago before evolving further.

While the giraffe inhabits the grasslands, savannahs and woodlands, the okapi reside in the forests and is a native of the Central African forests. They are found in the Democratic Republic of Congo, although they were also previously found in Uganda but became extinct due to various factors such as hunting and habitat destruction.

The okapi reside in both dry forests and rainforests and like tropical areas at altitudes of between 500 and 1,000 meters and they prefer areas that have a fresh water source. They occur in the central, northern and eastern parts of the country and near the Congo River as well as in the river basins of the Ubangi River, Lake Tele and Ebola.

It has developed various features as adaptive measures for the tropical environment, having numerous rod cells in the retina to enable night vision as well as having a highly efficient olfactory system. It also has large auditory bullae so as to enhance its hearing in the dense forest.

Its teeth are efficient for cutting tender foliage due to the fact that they are low-crowned and have fine cusps and moreover, they have a large caecum and colon.

The okapi lives a relatively solitary lifestyle, spending most of the time alone, although they do mingle once in awhile, feeding though this will be for a short period of time. The only other time that you will find them together is the time a mother spends with her calf, and when the different sexes come together for mating.

They are diurnal hence they are most active during the day, spending their time moving from place to place in search of food and water. The okapi is a shy animal and they will generally move around in areas that have heavy vegetation so as to have enough cover as a form of protection from predators.

These magnificent animals are territorial; however, the males will occupy a larger territory as compared to the females. Territories are marked by either urinating on the ground, bushes and trees or rubbing their necks on trees.

Just like giraffes, the okapi also exhibits necking, which is a combative behavior, the males using their necks to fight with each other. Necking is used to show dominance and compete for mates during the mating season as well as to settle territorial disputes.

The male will protect his territory, although he will let females pass through when it is mating season

Since they live in thick forests, they cannot see very far and they therefore use their hearing, communicating with each other through chuff sounds, while females will moan during courtship and calves will bleat when under duress.

Spending most of their day moving around for food, the okapi mainly consumes tree leaves, fruits, grass and fungi. With a relatively long neck, they are able to feed on leaves that are high up on the trees, however, not as high as the giraffe.

The okapi mainly eats woody dicotyledonous plants and will eat plant families such as Acanthaceae, Flacourtiaceae, and Rubiaceae amongst others.

The calves start eating solid meals at around three months old. Okapi makes use of available forest cover so as to hide while eating or moving around looking for food which makes it hard for them to be easily spotted. 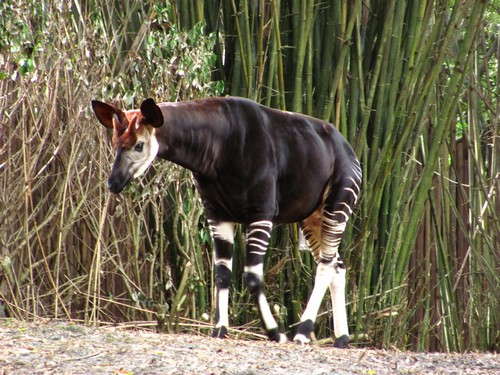 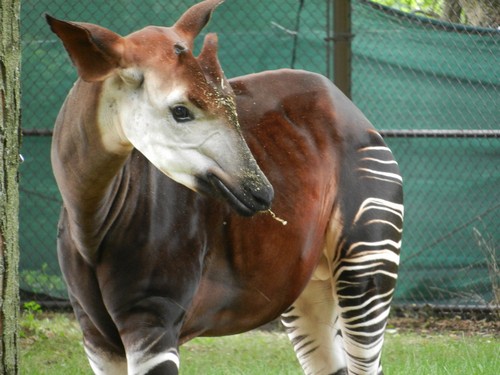 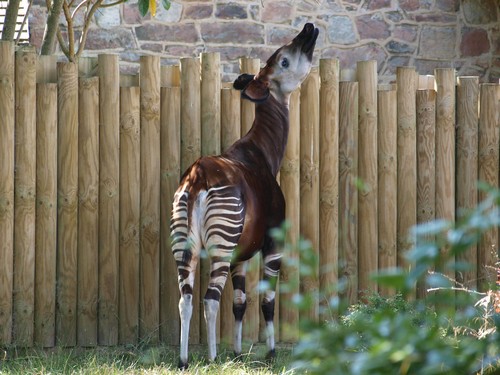 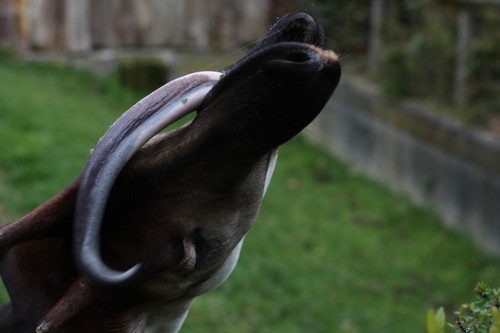 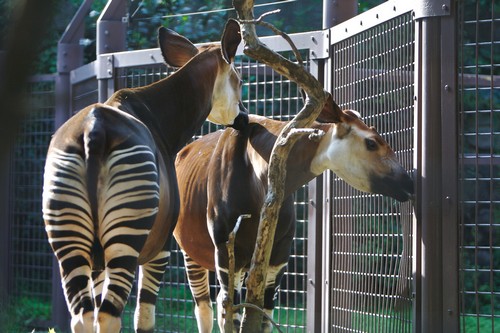 The male okapi will become sexually reproductive at 2 years old while for the female it is between 1.5 years and 2 years.  There is no specific breeding period because the female has an estrus cycle that keeps recurring every fifteen days.

The okapi court each other by smelling and licking while circling each other and the male has to show his dominance before mating takes place. He does this by tossing his head and having one leg forward.

After mating has occurred, the female will be pregnant for a period of about 450 days or 15 months after which one calf is born. On average, the calf will weigh between 15 and 30 kilograms.

The female may give birth while standing just as the giraffe does and the mother does extensive grooming, licking and cleaning the newborn calf. The calf will suckle for about three months, getting the proteins and other nutrients that it needs from the mother’s milk.

They are born with false eyelashes and a long mane, but all these disappear as the calf grows.

Similar to the giraffe, the newborn infant will be able to stand up in a few minutes after birth; however they will stay hidden so as to protect them from predators because they are more vulnerable at this stage, therefore nursing does not occur in a regular manner. 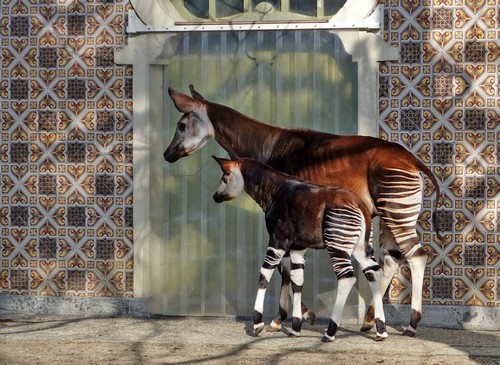 After birth, calves grow rapidly, but the growth rate slows down after a while. At 6 months old, the calves are completely weaned and they will live for an average period of 20 to 30 years.

The okapi once roamed through a vast area of central Africa, from the Democratic Republic of Congo to Uganda, however in recent years their numbers has reduced and they are now an estimated number of 22,000.

Their conservation status being classified as endangered by the International Union for the Conservation of Nature and Natural Resources, because it is estimated that in the last fifteen years alone their total population has almost halved.

Their main threat arises from habitat loss as a result of human activities such as farming, which causes deforestation as well as hunting them for their meat. Furthermore, there are increasing cases of okapi being caught in traps and snares that are set so as to capture other animals. 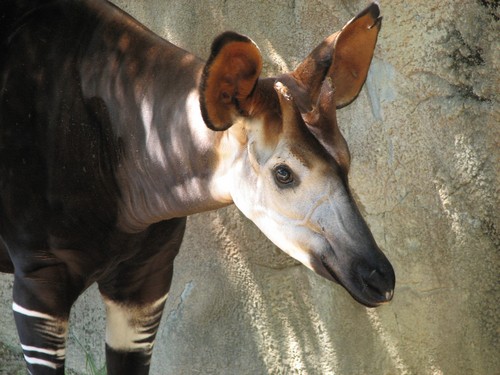 There are various conservation efforts being undertaken such as the Okapi Conservation Project that was established in 1987 and there are numerous zoos across North America and Europe currently having okapis in captivity. The Okapi Wildlife Reserve also has a significant okapi population.

Therefore, the okapi is not as rare as it was in the early twentieth century and has since come to be appreciated as a magnificent and beautiful animal. Since the year 1933, the okapi has been protected by the law in the Democratic republic of Congo so as to not only protect them but to also protect their habitat.