The ocelot may look like a large housecat but they cannot be kept as a pet because they can grow as about twice the size of a housecat on average and tend to have an aggressive character. This type of cat is actually a wildcat. The word ocelot originates from the word “tlalocelot” which is an Aztec word that means “Tiger of the Fields”.

They are also referred to as “painted leopards” and “dwarf leopards”, however in real fact they are more closely related to the small cats as compared to tigers and leopards. They have a unique pattern with dark spots on their coats.

One characteristic that sets this cat apart from other cats is that the ocelot doesn’t avoid water as what we perceived about most of the cats and they, in a fact a good swimmer. With teeth that are not designed for chewing, the ocelot will tear off flesh from its prey and swallow it whole.

Ocelots are nocturnal animals, being mostly active at night and spending the day resting either in trees or in dense bushes and thickets. At night, they can travel for a distance of up to 8 kilometers while hunting and looking for food. The males cover a more extensive distance as compared to the females.

There are an estimated 1.5 million ocelots worldwide with some found in isolated populations in the southeastern part of Texas. They can live up to 20 years of age in captivity, however on average they live up to around 10 years in the wild.

The only country in South America that doesn’t have ocelots is Chile.

Characteristics of the Ocelot

The ocelot’s coat has a variety of patterns, however just like the human fingerprint, each coat pattern is unique to each ocelot. The coat itself may either be orange, tan or white in color. The scientific name is Leopardus pardalis, with similar physical proportions as the bobcat. There are 10 subspecies that have been identified, occupying different areas of South America.

The length of the ocelot from head to the hind legs is between 50 centimeters and 1 meter in length. On average this cat weighs about 16 kilograms, although occasionally there are some that grow to be larger and heavier than these. The length of the tail varies from 10 to 18 inches. It is however shorter than the hind legs and either ringed or striped.

The fur is short, with a creamy, yellowish, reddish grey, tawny or gray coloration but the underside is white. The markings on the coat may be in the form of closed bands, open bands or stripes. The stripes are usually on the back and cheeks while the limbs and the head has small spots.

Ocelots do not roar, however they chuckle or mutter to each other and produce a yowling sound during the courtship period.

The ocelot is widely distributed in South Africa, from Mexico, Central America, Margarita and the islands of Trinidad. They exist as far as Texas, especially the southern part of Texas; however there are also reported sightings in Southern Arizona.

It is believed that this cat once existed in Uruguay but is now extinct. The Ocelots inhabit regions that have a thick vegetation cover and they go out into open areas, mainly at night so as to hunt. At elevations of up to 1200 meters above sea level, they are found in tropical forests, savannas and mangroves as well as thorn forests.

In the United States of America, they inhabit thickets found in South Texas and are rare to see. There are about 30 to 35 that remain in Texas, around Laguna Atascosa National Wildlife Refuge.

In Arizona, one was photographed in 2009, which was the first evidence of the cat’s presence that could be verified. The next sighting was in 2011, showing how rare they are in South Arizona.

The ocelot just as other cats, is a carnivore, it will generally prey on available animals, although it targets small animals that weigh about 1 kilogram or less. Due to their small size and weight, ocelots do not prey on large animals such as deer. They only require about 600 grams to 800 grams of food per day for all their energy and nutritional needs.

Ocelots will generally consume what is available in abundance depending on the season, preferring rodents and iguanas during the dry season. However, during the wet season, they prefer land crabs which are high in number during that season.

When hunting, the ocelot will pick up the scent of an animal and follow it until it gets to the prey. Hunting is either by moving at slow speeds while looking out for prey, or by sitting in a particular position for a period of 30 minutes up to 1 hour waiting for prey before moving to another location.

When they achieve a successful hunt, ocelots will eat their kill immediately; although they will hide what remains, and return to continue eating once they are famished once more. They have even been observed removing feathers from birds before eating them. They climb up trees to either hunt for birds, small animals or insects.

Their rear teeth cut meat into reduced portions like scissors which is then swallowed instead of being chewed. 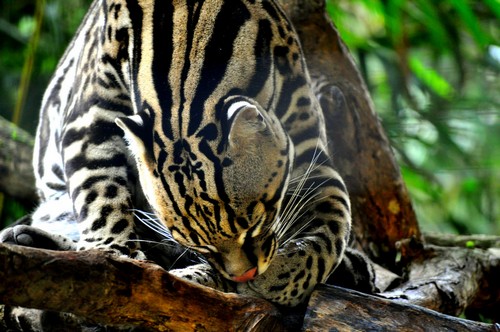 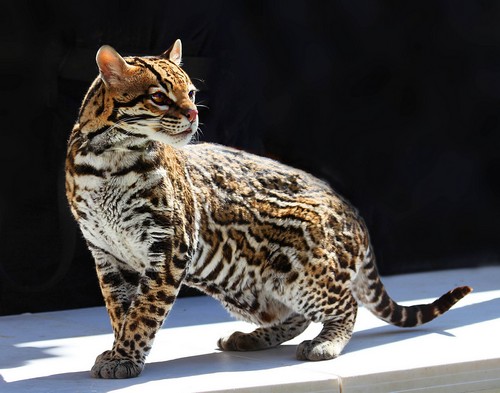 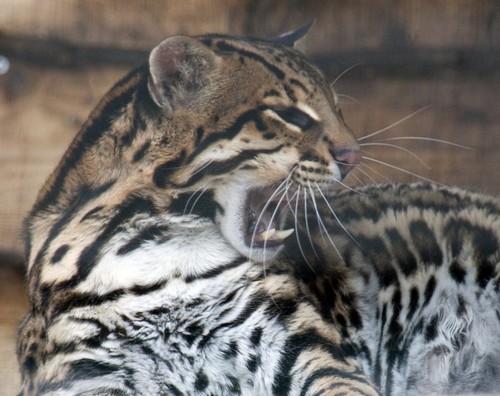 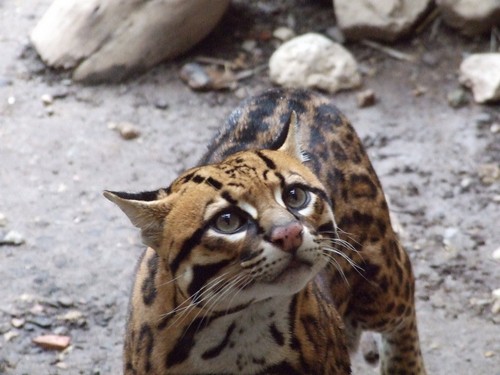 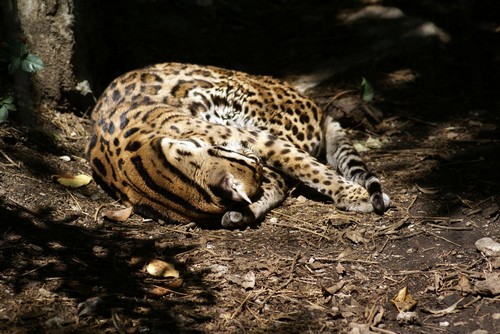 Ocelots do not have a specific breeding period in a year and mating can occur at any time of the year. However, there are certain periods when mating peaks, but this varies according to the location. In Texas and Mexico, the peak is around autumn and winter. However in Argentina and Paraguay, the peak period is in autumn.

The estrus period in female ocelots occurs in cycles, occurring every 25 days and lasts up to 5 days when the female is not pregnant. Mating ocelots will spend time together, and both the male and female will scent mark. During the mating period, they eat less as they mate around 5 to 10 times in a day because it is hard for a female ocelot to be pregnant.

Upon successful mating, the female ocelot will be pregnant for a period of up to 82 days, giving birth to a litter of 1 to 3 kittens, with a kitten weighing an average of 200 grams to 350 grams. They give birth in well hidden locations, in dense vegetation.

The female ocelot will have up to 3 dens which she uses on a rotating basis, staying in one den for around 64 days before moving to the next one.  Upon birth, the kittens will open their eyes after about 18 days and within three months they are ready to leave the den. 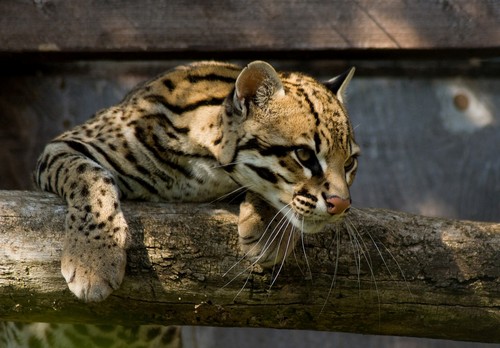 The males become sexually mature at 15 months while for the females it takes about 22 months. The kittens will stay with the mother for a period of up to 2 years, after which they will become totally independent and therefore will be ready to leave to establish their own territories.

Although there are about 1.5 million ocelots worldwide, there are various locations whereby the ocelot is considered to be endangered. However, generally they are not considered as endangered worldwide, and are listed as least concern because there is a wide distribution, especially in South America, with over 40,000 in Brazil alone.

In Colombia and Argentina, there are areas in which the ocelot is considered as vulnerable while in the United States and Mexico it is listed as endangered. In Texas, for example, the number has declined drastically and there are now less than one hundred ocelots. 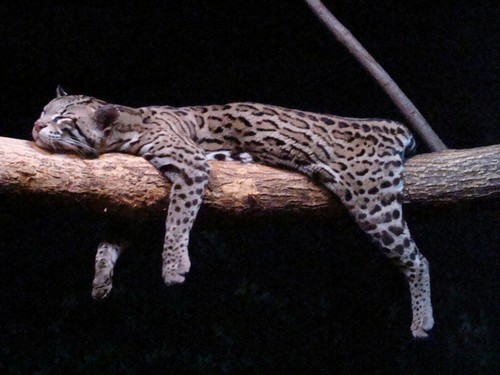 The main threat for the ocelots was as a result of hunting, especially the period ranging from the 1960s to the 1980s when they were hunted for their fur. During this period, coats that were made of ocelot fur could fetch almost $40,000 and this made it a lucrative business.

In 1989 there was a ban on the importation of all spotted cat species and the ocelot was protected. Today they are on the endangered species list of the United States Fish and Wildlife Services. Hunting is also banned in South and Central America as well as the United States.

Currently the main threat that affects the ocelot is the destruction of its habitats, especially as a result of farming and industrialization that leads to the destruction of forests.  This has led them to adapting to human habitats and they therefore can be found near villages or other human settlements.

There are various states that do not allow keeping ocelots as pets; however in some states one can keep them as pets as long as they can secure a license for it.