You will be forgiven to scream as loudly as your voice can possibly allow at the sight of a newt especially if you were not expecting to see it or have never had a chance to see it and have only read about it on books.  Newts are never scared, your presence cannot move one of its limbs and the funny thing is that it will stare at you and will leave you wondering what its next move will be.  It has a smooth and soft skin, sharp unblinking eyes, a long body and a long tail.  It has four limbs.  Their resemblance is in between a frog and a lizard. You can imagine walking happily all alone in a lonely neighborhood and all of a sudden unexpectedly you come across such a creature. Fear not! Newts are harmless creatures. When you get to know some interesting facts about them you will never again be scared. They are of the family Salamandridae and a subfamily of pleurodelinae.

They are semi-aquatic animals.  During reproduction they stay in water thereafter they go to the land.  They have two jaws with real teeth. With this information I hope you will not draw your finger near its mouth otherwise your finger will be its food for the day.

Newts have a very smooth skin.  Their skin differs in color. Most of them have two beautifully partitioned bright colors, example yellow and brown.  They are Amphibian and therefore can live in water as well as on land.

Ever wondered why some times newts’ smooth skin looks wet? I hope you didn’t think of touching the liquid on its body.  It is a poisonous liquid which it emits as a defense mechanism against its enemies or predators. If an enemy attacks it in an attempt to feed on it, it will come into contact with the toxin first and may die before it feeds or even kills the newts.

So the newts don’t have to fight for its safety, the toxin defends it and many of its predators will dare not want to come near it. The toxin comes from gland found near its neck and the tail. The toxin then spreads to the rest of the body.  It is not only poisonous but has a bad taste.

The long tail assists it to swim when in water.

If you can’t stand the sight of a newts and have been spending sleepless nights planning how you will attack it with a sharp object, cut its’ limbs and leave it for the dead, hold your horses! It won’t die and in a few days the limbs you have cut will re-grow to even better and stronger ones.  Newts have stem cells which have the ability to grow new tissue.

Once a limb of a newt is cut or amputated the cells around that area ‘go back’ (so to speak) to the time when they were just young cells which were able to grow tissues. The nerves on that area stimulate the production of a protein called nAG. With the help of this protein these tissues grow and divide at the place where the limbs or body parts were, forming new ones. The parts of the body which can regenerate are the tail, the legs, the upper and lower jaw, the eyes, the spinal cord, intestines and even the heart.   They can regenerate for up to 18 times.

Size and Lifespan of Newts

Newts vary in size and weight depending on which family they belong.  Most of them are between 5 – 20 cm long and a weight of between 10 – 50 g but we have others which are bigger and heavier than this. Most of them have a lifespan of between 2 to 15 years. Newts have four equal limbs which are webbed.

Just like other animals and human beings who wake up early daily in search of something to eat, newts move as far as 1 km in search of food.  Newts are carnivores, this means they don’t eat vegetation they eat meat instead. Their prey depends on the newts sizes.  The small sized newts prefer eating slow moving creatures like the worms, snails, beetles and the slugs.  The big sized newts eat creatures as big as fish, insects and even small crustaceans.  Some very big newts eat frogs, mice and even other small newts.

The most interesting part about newts is in its courtship.  They court in ponds and slow moving streams and have courtship rituals which vary from one species to the other. The common thing in all species is that the male newt transfers a spermatophore to the female newt when mating.  The female lays fertilized eggs one at a time and cover each one of them with aquatic plant for protection.  They hatch tadpoles.  These tadpoles feed on Algae, small invertebrates and even other tadpoles. Fish are a great threat to the young newts and tadpole and the eggs because they feed on them.  After sometime the tadpoles goes through a metamorphosis in which stage they grow limbs and grills on the body.  They move from water and start living on land until they fully mature.  They go back in the water only for reproduction. 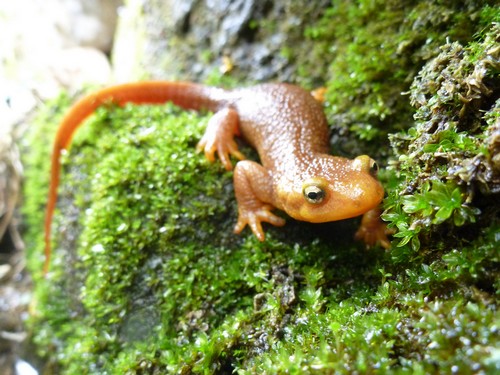 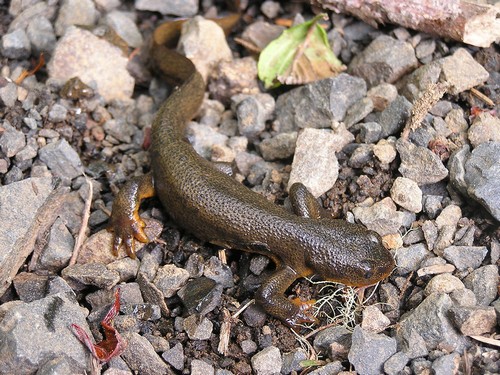 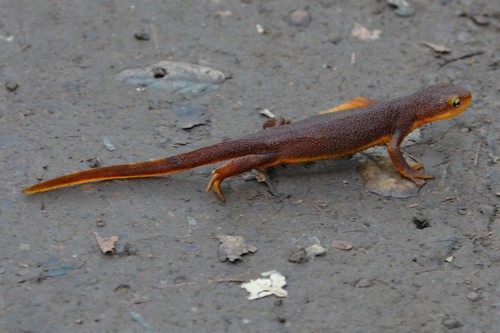 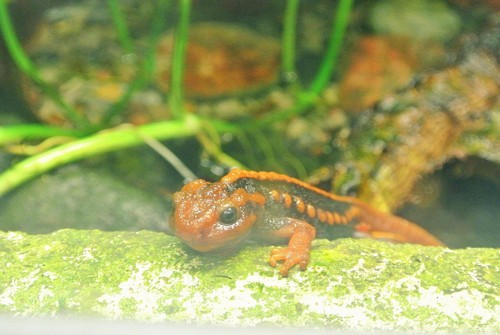 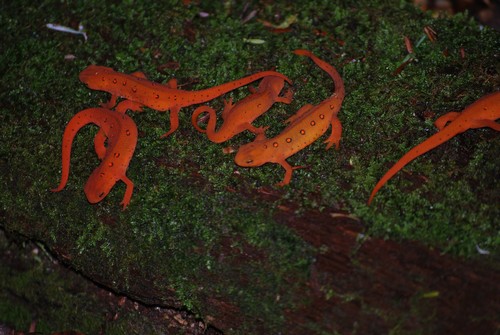 Where does Newt lives?

They can found in different parts of the world.  You will find them mostly in North America, Europe, Asia and North Africa.  You will also find them in other parts but in small number.

Newts live on stones and other dry substances during summer.  You will find them on stone fences and on rocks.  During winter they hibernate under logs and under stone for fear of the cold weather.  You will also find them under rubble pile.  Some species of the newts do spend the winter under the water.

Like any other creature, newts have animals which feed on them also known as their predators. Grass snakes, foxes and herons and the main predators of the adult newts.  The fish in the water salivate when they see female newts laying eggs and when these eggs hatched to tadpoles, because these eggs, the tadpoles and the young newts become their food. This is before the newts start producing the toxins.  Newts have an internal predator which is worse than even the external ones.  This is the great crested newts.  They are black, warty and twice as big as the normal newt.  They are also heavier and stronger as compared to other newts. Some animals are not affected by the toxin that is secreted by newt.  They feed on newts like they had nothing to fear.  This is because they have developed immunity and so the poison cannot affect them.  An example of these animals is a snake. 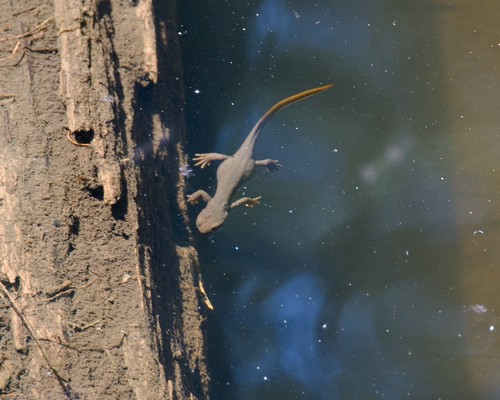 The population of them has decreased greatly.  This is because of the many human factors like  pollution.  Pollution has affected it because once newt inhales the polluted air it will die because of the toxin in it.  The other reason why the population of newts has decreased is loss of habitat.  When human being builds infrastructures and homes, the negative thing about it, is that animal habitation is destroyed. The places they lay their eggs are destroyed and therefore their population decrease with time. We would be counting the end of the last newt had the governments of several countries not incorporated newts in the wildlife and countryside Act. There is strict law that newts should not be killed or caught or possessed without a license. The law also states that nobody should disturb or destroy its’ habitat. 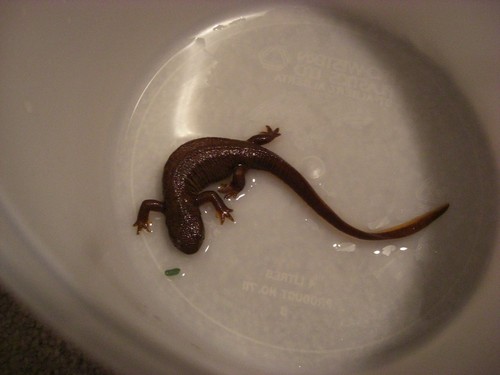 It is important to note that due to the toxin secreted by newts, proper care should be taken to protect oneself against the toxin.  If you accidentally touch the newt and come into contact with the toxin wash thoroughly.

Newts are beautiful creatures and should be preserved at all cost. Nobody should be allowed to destroy their breeding places because in doing so, the population of these beautiful creatures will decrease more than it has done.  Before the infrastructure is built people should survey well to see that newts’ habitat and breeding area is not affected.