To you they are all lizards and should be seen that way. While many articles and books maintain that the newt is a salamander of some sorts, the assertion is used to indicate that the two animals do, indeed, belong to the same family and have more traits in common than the house cat and the lion do. There are, in fact, numerous points of differentiation between the Newt and the common Salamander. In this article, we shall establish those differences and by so doing; learn a thing or two about our amphibian friends.

Newts as animals belonging to the amphibian class and the Salamandridae family (which is, in fact, the salamander family), they belong to the Pleurodelinae genus. The newt bear the common scientific name Lissotriton vulgaris, even though there are many species and lower classifications of newts due to their physical features and level of toxicity.

The salamanders are in fact from the same family as the newts. The Siren is a genus of aquatic salamanders of the family Sirenidae which have elongated eel-like bodies with two very small vestigial forelimbs. Many salamander genera and species exist all over the world.

Even though we can prove that the newt or the salamander and the lizard are very different from one another, the newt is best known for its lizard-like body (lizard-shaped newts are the only kinds known to man). The newt and salamander are four-legged amphibians are more closely related to one another than each is to the land lizard.

They both have moist permeable scale skin. Some species of salamander, however, have a more eel-like appearance than others. This is due to species difference (variations in physical traits of species) as different species can have less limbs (shorter legs) than normal. The salamander has a flattened head and body and quite small eyes.

Male and female salamanders and newts differ in size and coloring. This points to a suggestively dimorphic sexuality. The newt tadpoles have a slight resemblance to fingerlings but, the tadpoles have feathered external gills. Within the first few months, the young newt will grow legs, at this time, they will be able to explore both land and water before returning to the water.

Newts and salamanders have many color variations of black, brown, grey, green, orange, red, yellow, etc. usually with spots of color. They have a scaled skin type.

Most salamander species, on the average, can grow to measure up to 2-180 cm; when measured from tip of the head to the tail. The newt, however, may never grow to more than 5-15 cm.

Evidently, most newts are smaller and lighter in weight than many salamander species; measuring close to 10-50g (about 0.3-1.8oz) while most salamander species will cut across a weight of 0.1-65 kg (which is about 0.2-143 lbs).

I would be certain to state that newts do not possess fins and neither salamander species, all of them. This would make motility in aquatic environment very strenuous. However, the job in swimming and paddling water is made easier by the essential webbing of limb, which is more pronounced in the newt.

The tadpoles do have easier motility due to the advantage of their more streamlined body. This means that eel-like newts or salamanders will move easily in water.

Unfortunately, easy water movement could mean a more difficult land mobility. Due to the shorter or no limbs of the eel-like salamander and newt species and the fingerling-like tadpoles, land motion is difficult.

Newts are solitary animals, generally. Some species are known to hibernate together in groups. However, they come together during the mating season (as expected) taking place around spring.

In order to remain moist when on dry land, the skin of salamanders secrete a mucus coating. This mucus also helps to maintain the salamander’s salt balance while underwater and provides lubrication during swimming.

As a defensive shield, salamanders also secrete poisonous matter from glands in their skin. There are thought to be around 15 different species of newt found throughout the northern hemisphere, and most of these species are known to contain dangerous toxins in their skin which helps the newt to defend itself from predators; some species are particularly toxic, containing enough toxins in their skin to kill a fully grown adult human. The salamander can run up to 42 km/h depending on the size of the specie.

The newts can easily be found in temperate forests and river banks. Salamanders enjoy the rainforests, streams and wetlands. While a salamander may be spotted anywhere in the world (except, maybe, Africa), newts are often seen around northern America and Europe, and even Asia. It is relatively difficult to find a newt species anywhere around south America or Africa.

Some salamanders live in holes and burrows in the ground. The lack of exposure to sunlight give these types of salamanders a pink or white skin color.

This is where we encounter the major difference between the newt and its close cousin – the salamander. The newt develops from the egg, laid individually and attached to plants, into a tadpole stage. From the tadpole stage, it leaves the water after 2-5 months to spend the next 2-3 years of its life on land next returning to the water in spring to breed; and in fact live, permanently.

This means that the newt harbors an extra stage in its lifecycle when compared to that of the salamander – it spends two or three years of its life as a red eft before returning to the water, where it will spend the rest of its life as a mature newt. In contrast, most mature salamanders are terrestrial; spending most of their adult life on land, though they need a moist environment.

Therefore, we can actually refer to the newt as a semi-terrestrial aquatic lizard, while the salamander can be known as a semi-aquatic terrestrial lizard. Both, however, are amphibious. We can also understand why they both differ, by a wide angle, from the lizards as the lizards do not require moist environments, nor do their eggs hatch into tadpoles.

Amphibians such as our tiny newts and salamanders have the ability to breathe both on land and in water. This point to the possession of a dual respiratory mechanism.

We know that the tadpoles contain feathered gills which some of them may carry into adult life. If they do not develop a secondary respiratory system to enable breathe on land, then they will spend both their young and adult life underwater.

The adult salamander lives majorly on land pointing to a more developed lung system. Its ability to dwell in wet environments when it desires means it also possesses a means of aquatic respiration, just like the newt. 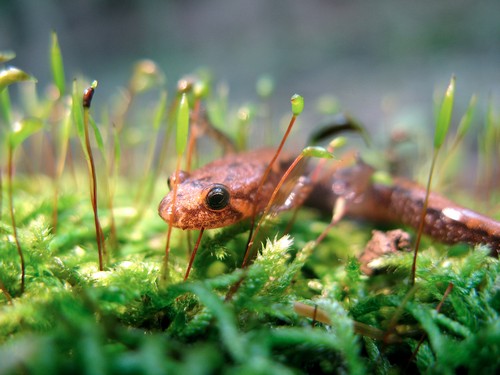 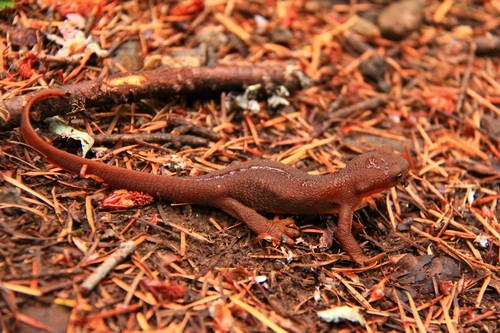 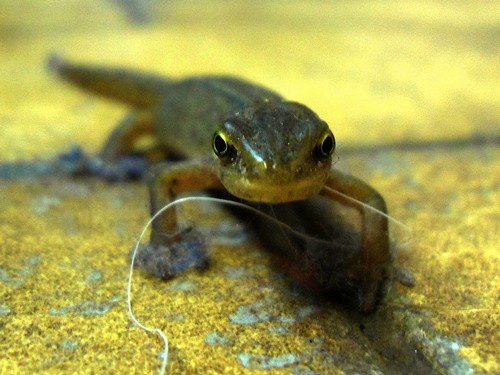 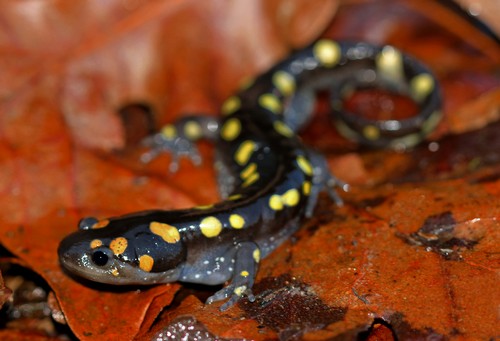 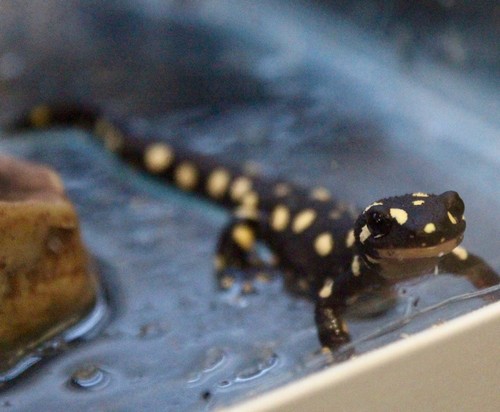 The newt is essentially omnivorous feeding on plant parts (herbivore) and animal parts (carnivore). It can feed on underwater plants and worms in the water or on land. It preys mainly on worms, insects, the water snails, etc. The birds, fox and reptiles are among its natural predators.

Salamanders are a little bit more selective with their food and tend to lean towards the meat-eating side of the food chain. Being carnivorous, it feeds mainly on fish, mice and insects. Bigger fishes, snakes and birds do, in fact, enjoy some salamander meat from time to time. You are making a mistake if you keep a salamander pet in a cat home. You might just catch your cat in a murderous act of having your pet salamander for dinner. 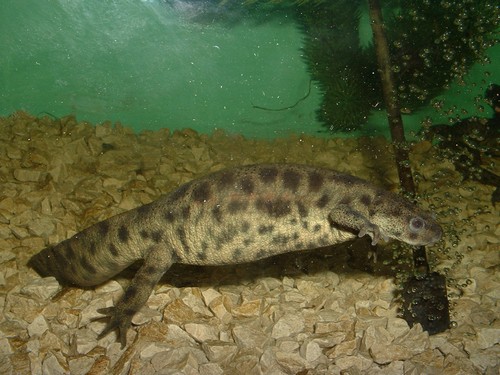 I would argue that rate of tissue growth in the salamander or newt species is noticeably rapid. However, rapid development and growth may slow as the species approach maturity, and may even come to a halt entirely.

Most salamander species have an extensively long life span of about 5-20 years. During that time, the salamander may continue to grow at a slow rate until senescence (aging process) is complete, then the animal dies. Some species may not live up to this number of years while some others may live longer than this.

Newts experience a much shorter lifespan of about 2-15 years. Many newt species do spend this entire lifespan underwater while others may never survive the tadpole stage or the transition back to the water.

Both salamanders and newts lay eggs which must be fertilized by the male species during the breeding season (around spring) and then laid individually. The major difference in egg-laying method between the newt and other amphibians is that most amphibians lay their eggs in clusters which float around the water surface while the newt attaches its eggs to underwater plants. 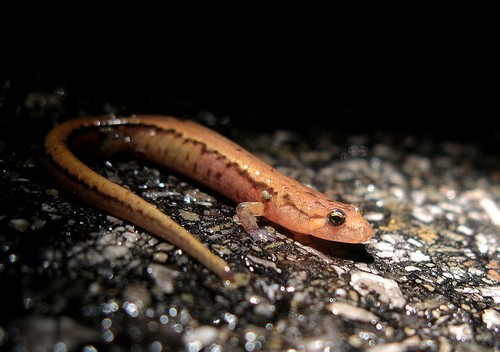 The most incredible feature of the newt, I have found, is their ability to regenerate (regrow) limbs and some body parts should their original limbs become damaged or wounded.

Newts also possess superfast healing abilities. Simply awesome! It is also important to point out that the salamander has the same regenerative ability and hence, the resultant rapid healing properties.

In the same way as a man would dress presentably in order to woo a lady, the male salamanders possess skin of brighter and more intense coloration during the breeding season.

The newt is small and quiet and some species can live up to 27 years. They are, therefore, kept as pets; they are seen as good pets due to their quiet solitary nature.

Salamander population numbers have been decreasing, rapidly, due to increasing levels of fungus present in water bodies.

According to the IUCN red list, the salamander species are threatened. Proactive measures have been adopted towards conservation.

Due to loss of habitat (which is in fact a problem for most animals), newt population throughout the world records severe decline leading to slight conservation effects both in the UK and the US giving the species a chance to try and increase in number. If the future generation must know about these creatures, this is the time to rescue them.