The naked mole rat, Heterocephalus glaber, is one of the most interesting animals. Even though many usually find it looking awkward and ugly, however they are quite fascinating. Although this animal is known as the naked mole rat but it is neither a rat nor a mole.

It is more closely associated to guinea pigs and porcupines as compared to rats and moles. They are called naked because they are close to no hair on their bodies and therefore appear to be naked compared to other animals that normally have fur.

The little hair they have is in the form of whiskers while the little hairs on their tails and in between their toes help them to feel their way underground and sense their environment. They are also known as desert mole rats or the sand puppy.

Interestingly, without fur or hair, one would think it is vulnerable; however the surprisingly characteristic of a naked mole rat is that it doesn’t feel any pain on its skin. And since it spends most of its life underground, there are few threats to this small animal. The skin is wrinkled and this may be part of the reason many people find it looking ugly.

Burrowing deep in the ground, the naked mole rats will dig using their incisors; therefore the teeth are specially designed for digging, with the unique capability of having each incisor move independently. In spite of the fact that  it is a mammal, the naked mole rat is different from other mammals because of a changing body temperature.

Its body temperature will shift according to the temperature of the environment similar to how body temperature changes in cold blooded animals. Of all rodents, they have the longest lifespan, with a lifespan of up to around 30 years of age.

The naked mole rats live in colonies and just like bees and ants, they have soldiers who protect the burrows and workers and dig as well to get food for the colony. They live their lives underground where it is dark and therefore do not have well developed eyesight, however they have well developed abilities of hearing and sensing motion. In fact, those kept in zoos are kept under low lights.

They are found in East Africa, living in the savannah grasslands of Kenya, Somalia and Ethiopia. They live in clusters and on average a cluster has about 80 naked mole rats, although this number can be higher than this. They burrow tunnel systems underground and they can make tunnels systems that are up to 5 kilometers long in terms of total length.

An interesting fact that has made scientists to study the naked mole rat is the fact that they seem to be cancer resistant, with no cancer case ever reported in their populations. There is a lot of study on this, with the hope of learning how they resist the disease and emulate it.

Characteristics of the Naked Mole Rat

On average, they are about 10 centimeters in length and can weigh up to 30 grams. They live in colonies with a queen and the queen is normally large and will weigh up to 60 grams. Since they live underground and do not rely on eyesight that much, they have actually small eyes.

For the reason that there is very little oxygen underground, the naked mole rat is well adopted for this by having very small lungs. Their blood has a great bond with oxygen, hence enabling them to survive with little oxygen in view of the fact that they have an increased efficiency in oxygen uptake.

Furthermore, this small animal has a low rate of respiration as well as metabolism, which translates it using very little oxygen. They also have the ability to reduce their metabolic rate, especially during periods when there is little food. The metabolic rate can be decreased by up to twenty five percent.

They lack a neurotransmitter which makes them unable to transmit pain sensations from the skin and this is an important adaptation to the environment that they live in. Naked mole rats have short legs which are adapted to moving fast, therefore whether moving forward or backwards, the mole rat can move at high speeds in both directions.

Since they do not have a constant body temperature, the naked mole rats will move to the shallow part of the burrow when they are looking for warmth so as to benefit from the warmth of the sun when it heats the ground. They will also hurdle together for warmth.

When it is hot however, they will move to the deeper parts of the burrow where it is cold so as to cool them down. In doing so, they are able to control their body temperature because it will help them to adapt to the environmental temperature.

The Social Life of the Naked Mole Rats

Interestingly, even though the naked mole rats are mammals, they show a social life referred to as eusociality. This is the same social life as the ones that ants and wasps exhibit. There is a queen, and this is the only female that reproduces. There are a few males who will mate with the queen while the rest of the colony is made up being workers and guards.

The workers collect food, dig burrows and take care of the young ones and also act as guards and when attacked, they will defend the colony. The workers are sterile and cannot reproduce and therefore they only focus on getting food and taking care of the nest.

They only way that other females can reproduce is when they take over the colony or when they start their own colony. Once they become queens, the female becomes reproductive. When the young ones are born, it is the duty of the workers to take care of the pups. They do this by keeping them safe, keeping them from wandering away, feeding them, keeping them warm and grooming them. 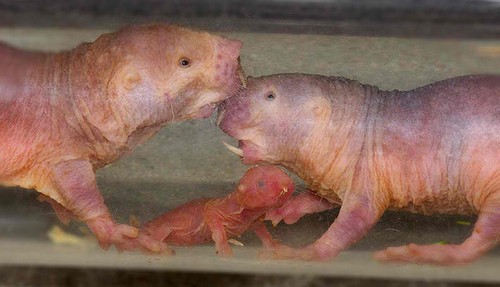 It is the queen naked mole rat that is the only female that can reproduce, with the rest of the females being unable to reproduce because their ovaries are not fully developed and they have low levels of hormones that are necessary for the body to be reproductive. The queen is also larger in size as compared to the other females.

The males are all of the same size, but it is only a few males, around four, that are able to mate with the queen.  The queen lives for a period of about 18 years and will have a long term relationship between her and the males that she mates with. She will get rid of any competition and will note this by sensing the females that are producing hormones so as to become queens.

Upon successful mating, the queen will be pregnant for around 70 days, after which she gives birth to a litter of pups. One litter varies in size, from 3 pups to 12 pups, however the average number is 11. A pup is born blind with an average weight of just 2 grams.

The queen will take care of them for the first month only, after which the workers take over. Interestingly, the young ones are fed on feces as they grow until they reach a point when they have grown enough to eat solid food. 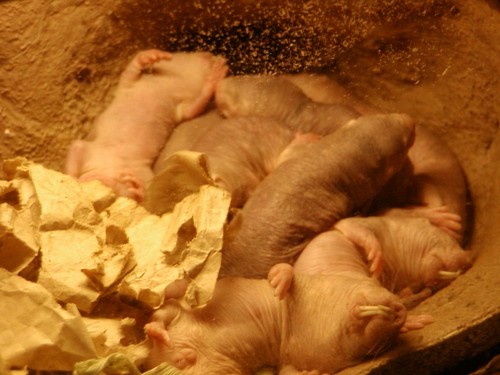 If the newborn pups survive, the queen will breed once per year, although in captivity they have been observed to mate all year round. When the queen dies, a new female will take her place, her body will produce more  hormones making her possible to produce offspring.

However, a new queen does not simply take up the crown, there is normally a fight and it is the strongest female that will end up being the queen. Once she becomes a queen, she will undergo various changes. She grows bigger and the space between the vertebras in her spinal cord will increase, making her able to manage pregnancy.

To avoid inbreeding, the queen will normally select males that she is unfamiliar with while the unproductive females will not discriminate the males, whether familiar or unfamiliar.

Diet of the Naked Mole Rat

For food, the naked mole rats consume tubers which they found underground when they dig tunnels. Even though they are small in size, they do consume large tubers and one large tuber can feed a whole colony for a long period of time.

However, they always allow tuber to regenerate and will generally consume just a part of it.  This works to ensure there is a constant supply of food for the colony. Their stomachs have special bacteria that help them to be able to digest indigestible cellulose. 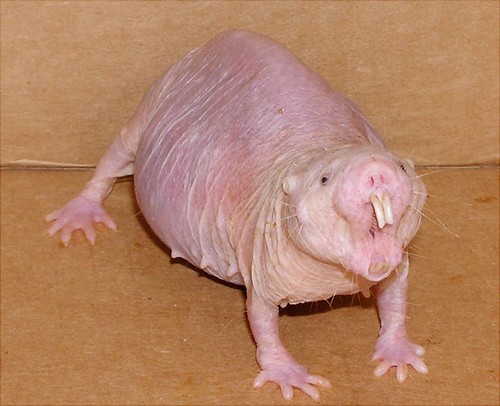 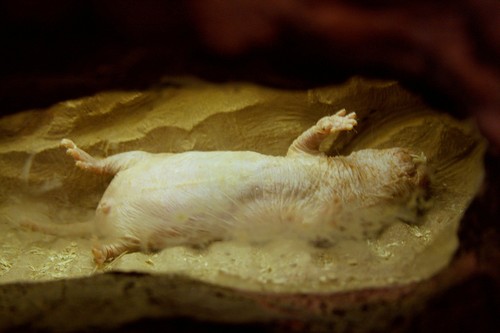 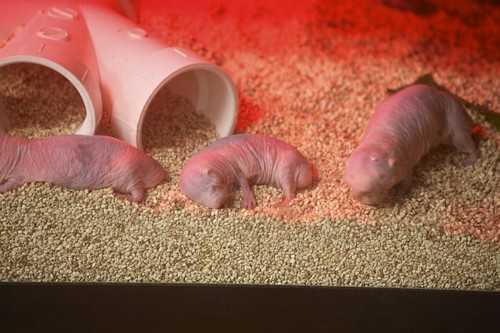 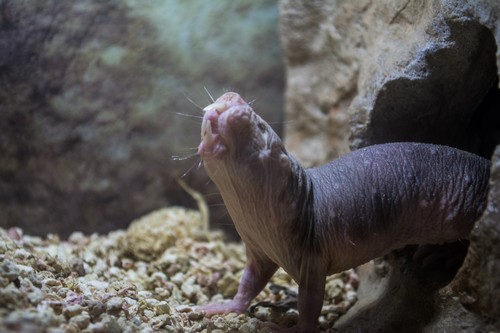 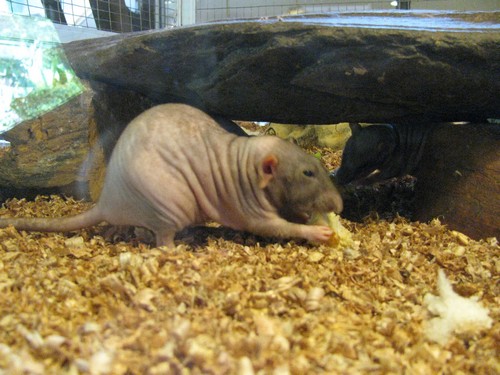 The naked mole rat population is not under any threat and they are not considered to be threatened because they are widespread in large numbers across East Africa, especially the dry parts.

Their main threat comes in the form of predators, the key predators being snakes such as the Kenyan Sand Boa and Raptors.