Lions also known as  The King of the Jungle, isn’t it?? This is the first and foremost thought that comes to our mind whenever we think of the word lion. Long facial hairs, bossy attitude and fierce.

But here, we are going to read about such a creature, which although visibly appears similar to that of a conventional lion, but has characteristics and behavior completely different from it.  We are talking about the Mountain Lions, fondly called the Cougars.

So come, let’s hop in and learn a new array of facts about this interesting creature, the Mountain Lion.

The Mountain Lion, or generally the Cougar, which it is commonly referred to, is a large and humongous  member of the Felinae subfamily, which is mainly a native of the American subcontinent. The other few common names of the mountain lion are the puma, catamount and also the panther.

The Mountain Lion has its habitat ranging from various drastic locations, right from the Yukon of Canada to the southern part of the South American continent, the Andes. Another fun fact regarding the Mountain Lion is that it is the biggest among any other wild mammal in the entire hemisphere in the west.

Shrouded and to a great extent single by nature, the Cougar is appropriately viewed as both nighttime and solitary loving creature, in spite of the fact that there are sometimes daytime visuals.

The Mountain Lion is all the more firmly identified and related with little cat family, rather than the larger cats. The only species native to the Americas of the larger cat families is the Jaguar.

The Cougars or the Mountain Lions, the name with which they are commonly known, once used to roam and live in mostly all of the United States of America. They were held very important and prestigious by the poachers and hunters, but were despised and looked down as a liability and threat by the peasants and ranchers, who feared that their livestock and pets were in grave danger due to the sudden attacks by these cougars.

Thus, by the beginning of the twentieth century and the subsequent era, these mountain lions were dispensed with or cleared out from almost the greater part of their habitat in the Midwest as well as the entire Eastern front of the United States of America, but it has been seen that with all the clearing out of the cougars, the Panther still populates these areas.

Nowadays, large populations of the White-tail deer have populated and occupied the territories which once belonged to these mountain lions and it has also been discovered that a few more creatures have inhabited the Eastern states of the United States including states like Arkansas as well as Missouri.

Some of the well known biologists have discovered that these cougars can reclaim their territories from other animals and re-establish themselves along the Eastern and Midwestern ranges, only if the existing human population would permit them to do such.

Although the numbers of these Mountain Lions are decreasing at an alarming rate, the number and population of these cougars are quite healthy in some states of the Western part of the United States of America as well as Canada. And courtesy of this fact, the authorities have allowed managed and restricted sports poaching of these creatures.

The Cougars or the Mountain Lions are usually seen breeding and preying on animals such as deer, although it has been seen that they do not only prefer deer, but also some small creatures like raccoons, porcupines and coyotes to be named a few.

It has been already discovered that these Mountain Lions are nocturnal and solitary loving creatures and hence, they tend to prey and hunt for their food during the nights or sometimes, during the wee hours of the closing dusk or early hours of the dawn.

These big cats utilize a mix of stealth and strength, following a pattern of stalking their food till an opportunity comes to jump, then going for the back of the neck with a deadly nibble. They have a tendency to hide the bigger corpses and these Cougars will eat them for a few days.

A Mountain Lion is known to be the top hunter and predator regarding its ecosystem. These animals undertake a major responsibility by playing a very critical role in maintaining the balance and helping its ecosystem and the entire habitat by ruling out all the small and feeble creatures so that the cycle of the ecosystem as well as the food chain does not get hindered and interrupted.

It has been extensively found out that the preying conduct and behavior of a Cougar resembles that of a simple domestic pet cat. 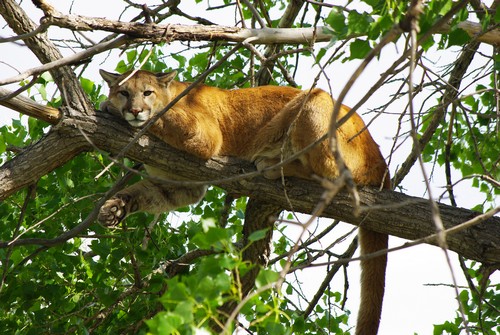 The strength of the Mountain Lion lies generally in its ability to conceal and hide itself and suddenly attack its prey in order to gain the advantage and an upper hand in the resulting combat between the Mountain Lion and the prey and also between the struggle and scuffle of life and death.

A Mountain Lion is very distinctively visible when it is on its course to attack a prey and is in stealth mode. Its twitching tail as well as the upright and erect ears is a sign which portrays the message that the Mountain Lion is following its prey and preparing itself to ambush its enemy.

Whereas, an angry and irritated Mountain Lion is more likely to be seen with its ears laid back and the lion snarling on the top of its voice. 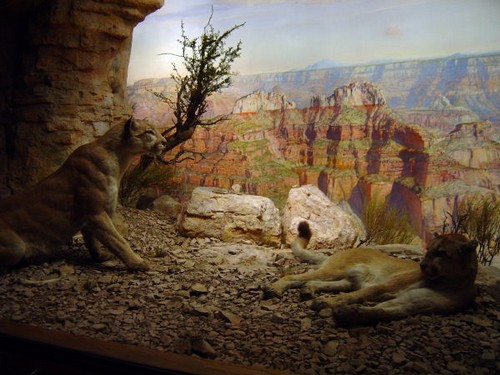 Mountain Lions are found out to possess an incredibly impressive size to strength ratio as compared to other bigger cats. It has been found out that the Mountain Lion is able to hunt down most of its enemies, regardless of their massive sizes and many a time, it has been seen that these mountain lions can also kill foes as large as twice its size and strength. Surprisingly, a 400 pound creature is nowhere a match for the Mountain Lion.

Another interesting feature of a mountain Lion is that when it hunts down and kills an elk, these Mountain Lions tend to land on the neck of the elk and pull out its head on the rear of its neck with the help of the front paws with a thrust larger and stronger enough to capsize and snap the entire neck of the elk. They normally will cover up the entire body and feast upon it for a few days before proceeding onward for the following supper. 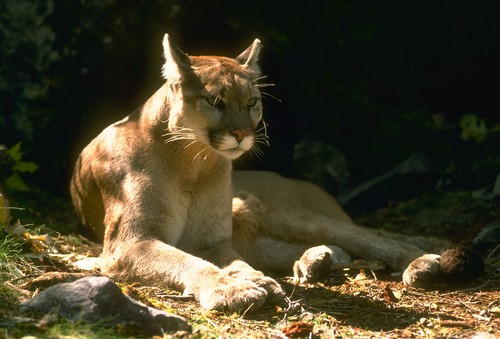 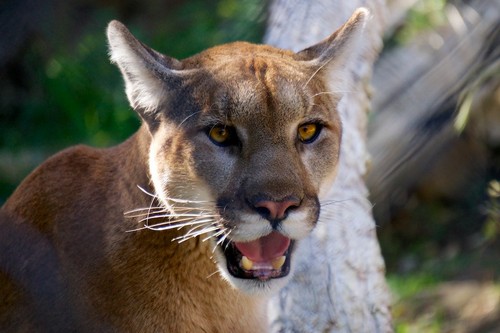 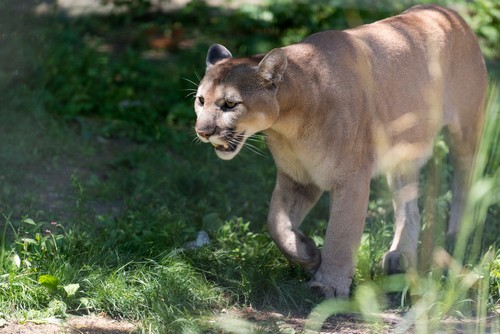 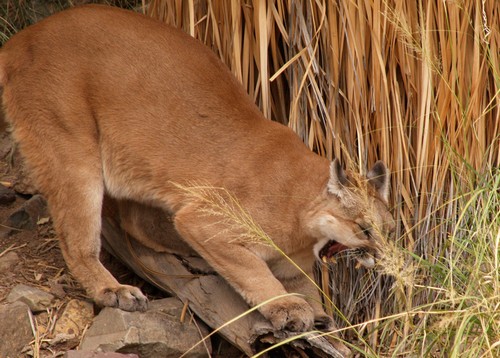 The vast majority of the females have been found out to achieve their reproducing capacity and development for the most part between 1.5-3 years of age.

Throughout their mating period or reproducing period, the Mountain Lions are found out to have averaged approximately 1 litter in about every 2-3 years, still it has also been mentioned that this period can be shrunk and brought down to as low as 1 year.

The females ones stay in the estrus for nearly around eight days in a 23-day course; however the incubation period of a Mountain Lion was found out to be approximately 91 days, yet it can vary from individual to individual depending upon the fertility.

One of the most contrasting feature of a female Cougar is that although it has been declared a mainly monogamous creature, evidences have been found out to establish the fact that, sometimes they are found practicing polygamy; i.e. mating with more than one male cougar. 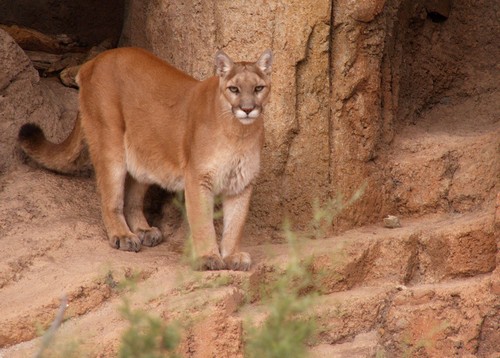 It has been commonly noticed that just the female partners are responsible for the parenting and upbringing of the new offspring. The female cougars are ferociously wild and critically defensive when it comes to their young ones, sometimes even battling off large bears for the protection of their off-springs.

The Cougar cubs are born totally blind and are solely dependent on their mothers for everything.

As these cubs begin to grow, they accompany their mothers to visit the killing areas just after three months of their birth. After about 6-7 months, these young little cubs become self sufficient and go on hunting sessions alone without any elder member.

At the point when baby cougars are conceived, they are found to have various spots on them, however they tend to lose these spots as they get older, and as they grow and become 2-3 years old, the spots are nowhere to be seen.

Youthful grown-ups leave their mother to endeavor to set up their own domain and habitat at around two years of age and many a time sooner; however the male cougars mostly depart sooner.

According to a study, it has been found out that the mortality rate amongst the Mountain Lions who travel continuously , is much more as compared to those whose are less frequent in visiting new places and habitats. One of the most drastic reason for this fact is that the cougars who travel for longer periods in search of new habitats get to know newer individuals , whereas the ones who tend to stay close to their mothers do not get the opportunity to mix up with the others and hence, this indifference.