Meerkats, also known as suricate are carnivorous animals from the mongoose family and are known scientifically as Suricata suricatta. There are three subspecies which are majoriae, iona and siricata. They have been depicted in a number of ways in various movies and as much as they are not exactly the same as in the movies, meerkats are really interesting animals.

They are found in Africa, in the desert and dry parts of Botswana, South Africa, Namibia and Angola. They can live up to 14 years of age; however this number varies due to external factors such as predation and other conditions.

They live in mobs, or can also be referred to as gangs, and no matter how much you like them you would probably never want to make them a pet. The meerkat is a very fascinating, small, and extremely possessive animal. If you attempt to make a pet out of a meerkat, it will probably urinate on you to mark you as theirs and will even bite strangers who come close to you.

These little creatures are well capable of eating venomous animals such as snakes and others that they find. Breeding is done by the alpha male and alpha female only and therefore when other meerkats in the group breed, the pups are killed instantly and the two parents excommunicated immediately from the group.

In an interesting way, as an adaptation to this, meerkats have an extraordinary ability in being able to judge whether other meerkat, apart from the alpha male and alpha female has gotten pups in secret. They live in burrows and are therefore adapted by having ears that can close during digging so as to prevent soil and dirt from going into the ear canals.

They have long claws, which are sharp and cannot be retracted, which are well adapted for digging burrows as well as to flip rocks so as to find insects that hide under. Meerkats will always watch out for each other and raise an alarm when a predator is spotted.

Meerkats have poor close vision, but then it comes to distance, they can see really good. Being long-sighted enables them to be able to spot predators from far and warn the others early enough. They are also able to discern voices and can therefore be able to recognize the voices of the different members of the gang just like human beings can know the different voices of their family members.

Considering that they make meals out of very dangerous and poisonous animals, adults will teach the pups on how to successfully hunt and eat the poisonous snakes and scorpions amongst others.

Characteristics of the Meerkat

Their vision is adapted to their environment and is binocular, similar to the ones that cats have and this enables them to see objects that are far really well. The eyes have black patches surrounding them and this works to reduce glare from the hot desert surface as well as the sun. Meerkats are capable of climbing trees using their claws and their powerful hind legs.

Their backs have stripes that run across, starting at the base of the tail going up to the shoulders. Just like human fingerprints, the stripes on each meerkats back are unique to that individual. They have a small patch on their bellies which is covered by little hair and this patch is useful for absorbing heat when the meerkat stands upright in the sun, which they normally do early in the morning.

Meerkats are very territorial animals and a gang will protect their territory from other gangs. Occasionally, when there is a conflict between two gangs over territories, violent turf wars break out. These wars are brief but brutal and adults of the whole gang will be involved in the fight. Every year, such fights lead to the death of more than half of the adult meerkat population.

The Social Life of Meerkats

Meerkats are social animals and they live in gangs that can have up to 30 individuals, however the number may occasionally go up to 50. They live underground in large tunnel networks and these tunnel networks have various entrances.

The meerkat that stands on guard will produce a variety of sounds when a predator is spotted depending on the type of predator spotted. The meerkat on sentry duty will produce a barking sound so as to warn the rest of the gang members, upon which the all run into the various holes. This is the advantage of having a network system with many entrances.

There are different types of calls which can indicate whether the predator is an aerial predator or a terrestrial predator. Even so, there are different categories in each call to indicate whether the call is of high, medium or of low urgency and how fast the rest of the gang should react. The higher the urgency, the faster they have been seen to react.

Meerkats will also engage in power play, seeking to improve the position of their offspring in the group, subordinates may kill the offspring of senior members of the gang. They scent mark each other and the dominant male or female may scent mark the members of their gang so as to be able to differentiate them from intruders. 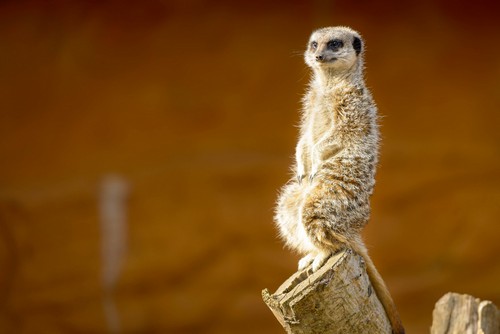 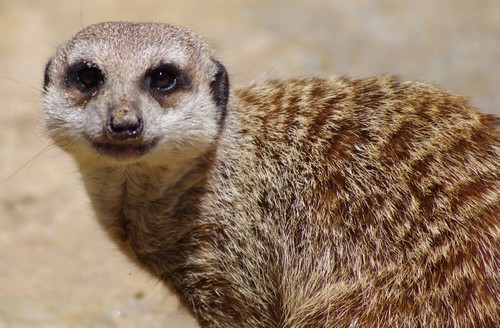 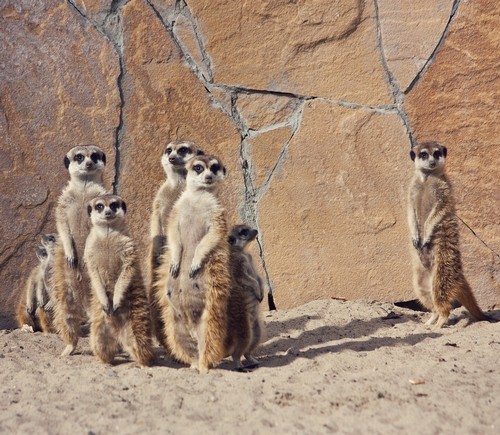 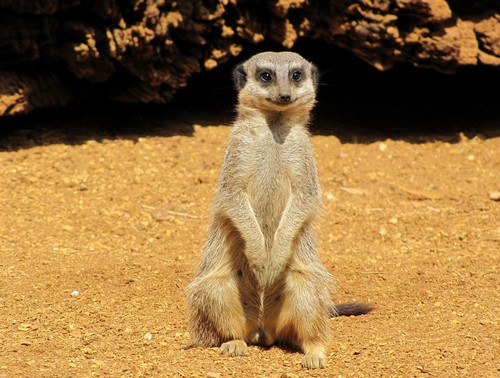 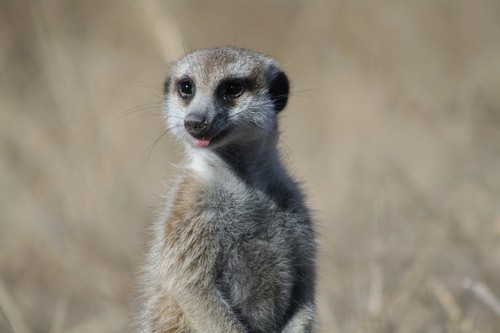 Their daily diet mainly includes insects; however meerkats will also prey on other small animals such as snakes, scorpions, frogs, spiders, lizards and other small mammals as well as eggs when they come across them. Being immune to venom from various animals, meerkats eat some of the most poisonous animals, some of which have venom that can kill a grown man.

When foraging, there is always a meerkat that stands guard and keeps a keen eye, looking out for predators, so as to alert the rest of the gang. So as to ensure everyone gets to eat, the watch-out role is on a rotational basis, and in about every one hour, a different member of the gang will take up the look-out duties so that the other can eat.

Meerkats start foraging and digging for food when they are older than one month old and will do so by learning from an adult meerkat.  Members of a gang will work together when a snake is spotted and they will jointly claw and bite it until it either escapes or is killed, however one meerkat will rarely do this when it is on its own.

Meerkats do not have a specific breeding period and they breed all year round. It is the alpha male and female who have the right to mate and will ensure their dominance and that of their offspring. Offspring born from non-dominant pairs are often killed by the dominant pair. 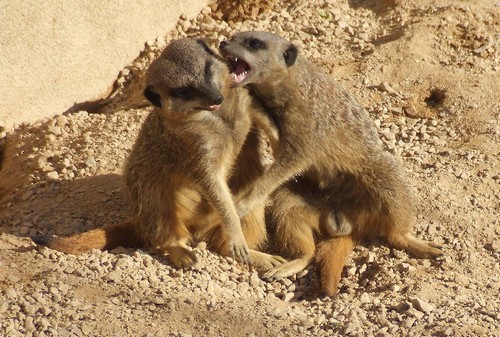 However there are instances whereby instead of killing the unwanted offspring, the subordinate female that gave birth is evicted from the group. This is how new gangs come up since the female that is banished from one gang will eventually meet another male, they mate and get pups and a new gang is gradually formed.

Before mating begins, the male will subdue the female, and usually this happens after a brief fight. Once the female has submitted to the male, copulation takes place.

The pregnancy in a female meerkat lasts for a period of about 3 months. The young ones, called pups are born in the underground burrows and are born when they are undeveloped; usually a litter has 1 to 4 pups, however on average there are 3 pups in a litter. The eyes will open after about 14 days while the ears open at 10 days. 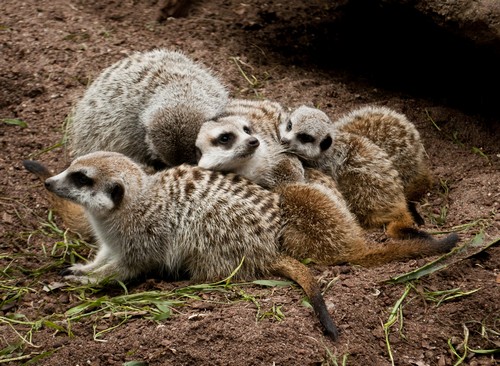 There are subordinate in the gang whose duty is to take care of the pups. Females on nursing duties will even lactate and produce milk so as to feed the offspring of the dominant male and female. Normally there will also be one male and other young adult meerkats that stay behind so as to help in taking care of the pups.

Meerkat females can distinguish between their kin and non-related meerkats and this is seen as important in not only enabling them to recognize their kin but to also prevent inbreeding.

Meerkat pups become independent after about 7 weeks and they become sexually mature at around 4 years of age.

Their conservation status is least concern. They are not considered endangered however they are not allowed to own as pet without proper permits and licenses.