From its name, you may be tempted to think that it is a wolf. However, looking at it gets you to rethink your original idea because it is not a fox. Its physical appearance is close to that of foxes, but it is not a fox either. It is betrayed by the fact that foxes have elliptical pupils that are vertically oriented to help them see in the dark. The maned wolf, on the other hand, has circular pupils.

Just when you think it is in one group of animals, a small physical feature changes everything. It, therefore, does not sit comfortably in any classification. This is a loner. In the family of canids, it is alone. Scientists have placed it as the only canid in the species of golden dogs.  Its closest ancestor was the Falkland Islands wolf which was not a wolf. This animal also went 6 million years ago. Several interesting things are notable about the Maned wolf.

It is the tallest Canid in the world

Its unprecedented height has had it classified as the tallest canid in the world. When fully grown, the Maned wolf’s shoulder height is 35 inches. When you think of canines, even leopards do not become close to this height even as adults. Unlike other canines that quickly add weight and are significantly heavier than they look, the Maned wolf attains a maximum weight of 50 pounds or 23 kgs. Its body length from head to tail is 145 cm. They have disproportionately long legs which make them attractive to look at. It has large ears to help it hear its predators and prey coming. Its ears have a height of 7 inches.

Like with all animals in the wilds, its physical appearance, though beautiful, is all about survival. Everything in its physique is meant to help it thrive and defend itself in the wild.  It is not known whether the Maned Wolf originally had such long legs.

However, they are actually useful. Because it most lives in areas with tall grasslands, the long legs allow it to see. Its fur ranges in color from reddish brown to golden orange. This coat allows it to integrate with its environment especially as it is hunting.  The tip of its tail is decorated with a whitish tuff, and there is a white bib at its throat. Its fur is erectile, like that of most canines. When angered, its Mane enlarges making it look bigger than it is. This is also a display of aggression which has its enemies scatter with fear.

Like all animals in the world, including human beings, there are Maned wolves that have a rare melanistic color. For instance, in 2013, in Brazil, photos of a Black Maned wolf circulated the internet.

The hunting and living styles of the Maned Wolf are not similar to those of the other larger Canids. For one, unlike them, the Maned wolf does not form a pack. Just as its natural history of being alone in its genius, it prefers to stay alone. It mostly hunts at sundown and midnight.

This is  however, an uncomplicated version of how the Maned wolf works. It’s sleeping and hunting schedule changes regularly depending on its region and what season it is. For instance, Maned Wolves in Bolivia wander at any time of the day during the wetter months and are not seen at day time during the drier months.

Their enormous ears rotate when they are listening to prey animals in the grass. After it has tactfully reached its prey, the Maned wolf will tap its foot on the ground and startle its prey into running. Then it will pounce on it and catch it. For killing its prey, it will bite hard on its neck or back. Whenever it is necessary, it will shake its prey vigorously, using its teeth, to kill it.  Several adults may congregate in the presence of plentiful food and eat together.

Both the male and female Maned Wolves communicate using their urine. They will use their urine to market their hunting territory and areas where they have hidden hunted prey. In Dutch way back 2006, the police were notified that there was a marijuana smoker in the region. As they were investigating trying to catch the culprit, they found out, accidentally that the source of the marijuana smell was not an actual smoker but the Maned Wolf marking its territory. If you live close to areas inhabited by these animals, it is safe to say that not all marijuana smells will be from marijuana.

The urine of the Maned wolf smells like marijuana because of a substance is known as Pyrazine which is a naturally occurring chemical in its body like ammonia for human beings. As it urinates, it releases hexagon-shaped clusters of carbon, nitrogen, and hydrogen a chemical combination that creates a powerful smell, similar to that of marijuana smoke.

During mating, the Maned wolf is a monogamous animal. During this time, it will choose itself a female and together they will mark their territory which is usually 30 square kilometers.  This territory is crisscrossed by tracks made by the wolf as it is patrolling at night. When the mating season is over, each will go back to its loner livelihood and they will seldom meet. Unlike other monogamous animals, this is not a great love story.

After mating, which mostly happens in November, the two animals will go their way. 60 days or so later, which is how long gestation takes, the two will come together to reproduce.  The female will get anywhere from one to five pups. The pups are born with a weight of 450g. The two will again mark their territory and rear their pups until they are one year old. Before they are fully dependent on themselves, the pups will rely on their parents for food, warmth, and protection.

At birth, the pup’s fur is almost black. It, however, changes color as they mature. However, the legs maintain their black color right from birth. The pups are so adorable one may be tempted to adopt one.

What does Maned Wolf eats?

Unlike most Canines, this one’s diet is an omnivorous one. The animal preys on small and medium sized animals such as rabbits, rodents, and birds. Occasionally they also enjoy fish. Meat constitutes of 50% of their diet. The other 50% of their diet constitutes of vegetables such as sugarcane, fruits, and tubers. It enjoys the wolf apple which is a tomato like fruit known for helping it stay free from kidney worms.

To germinate, it is said the wolf’s apples seeds must go through the stomach of the Maned wolf. However, this is thought to be true because the Maned wolf usually defecates directly on the leaves.  Insects then take the seeds from the fecal matter to their colony in garbage piles where the seeds can grow. The cycle repeats themselves and is a mutually beneficial process for the wolf and the plant.

The wolf is therefore in a symbiotic relationship with other animals and plant. Its defecation on the leafcutter ants increases the germination of seeds and allows more and more plants to fill the forest. 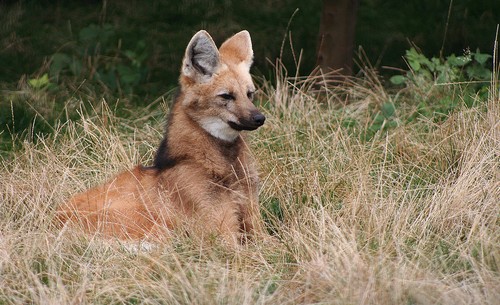 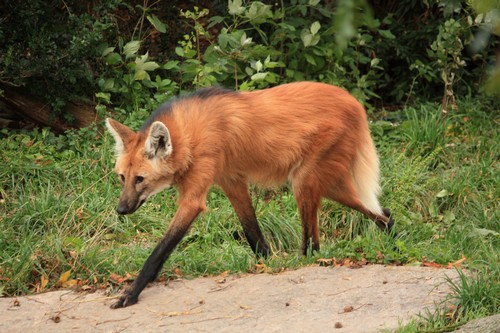 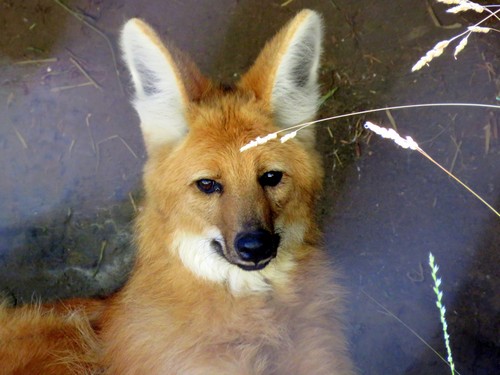 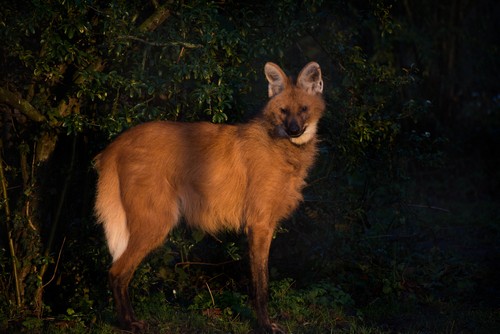 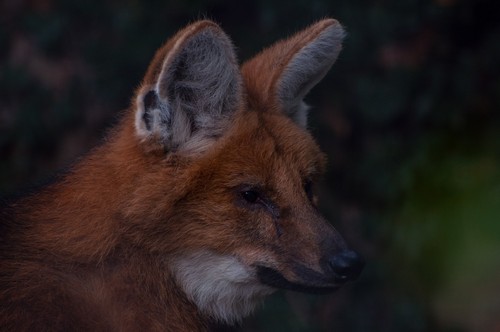 The Maned wolf communicates using three ranges of vocalization. The roar bark is used to contact its mate at long distances. It produces a low growl when in distress and as a warning to its friends and high pitched whines are used as greetings.

Like its ancestors, the Maned wolf’s status is near extinction. If nothing is done, this wolf may not be in existence in the next couple of years. In the wild, the animal such as the feral dogs attack and kill the Maned wolf. Besides, the wolf is usually in constant fights with domestic dogs over territorial boundaries. The giant kidney worm is a fatal parasite that always threatens the life of the Maned Wolf. The giant kidney worm is a significant threat to this animal because it is caused by eating dead animals.

Looking at the relationship between this animal and humans, this animal is shy and flees when threatened. To humans, therefore, it doesn’t pose any direct threat. In the past, it was thought that this animal was a chicken thief and posed a threat to cattle and sheep. However, this was proved only to be a myth. In Brazil, this animal was hunted for body parts such as its eyes which were thought to be good luck charms. After being classified as a vulnerable species by the Brazilian government, it has received more consideration and protection from wildlife officials in the country. Habitat loss also threatens them due to urbanization. They are constantly run over by automobiles. It is, therefore, important to educate children and adults about this beautiful animal that faces extinction. Protecting wildlife should be the pride of every person on the planet. 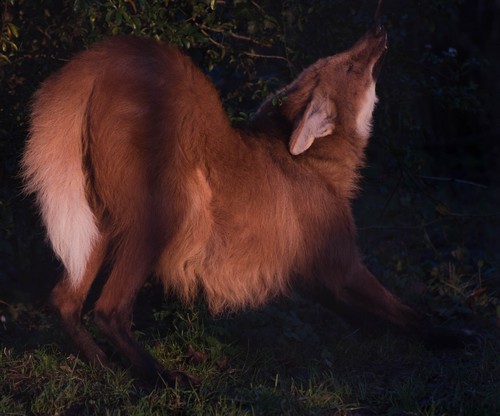 There are only 17,000 male adult Maned wolves in the world most of which reside in Brazil.