Someone once said “Every bird on earth is interesting”. This statement has been proven true in a lot of birds including the kookaburra. This Australian bird may not be as physically interesting as one would expect. However, the facts which surround this bird, as well as their natural behaviours make them distinct in their own ways.

In this article, you will learn a whole lot about the kookaburra, starting with their physical features. Below are the lists of the bird’s most interesting facts and features. Enjoy.

The kookaburra has some physical features that can be considered funny. In fact, one look at this bird will leave you with a lasting impression that is humorous. But what is it that makes this bird look funny?

Although they are the birds in the kingfisher family, virtually every part of this bird’s body is short. It has a pair of short wings and a very short tail. Its body proper is relatively big and round. Since this east Australian bird is a carnivore, its beak is long and powerful.  The most popular kookaburra specie is the laughing kookaburra. Like other kookaburras, it has the following characteristics.

Though very tiny at birth, in a space of one month, the hatchling undergoes considerable development.

This bird has a habitat as simple as that of most birds. It is a wonder that though they do not have too many requirements for living successfully, they are restricted to just two countries.

From all indications, the kookaburra is native to the great Australian climate.  Although some of these birds have been found in Guinea, they are most dominant in Australia, especially the laughing kookaburra which is native to the land. Naturally, kookaburras prefer at the tropical woodlands. They would perch on treetops as though they are confuse even so they are monitoring their environment.

Kookaburras have a behaviour like no other.  Starting from their sleeping, that is if they actually sleep, to their waking, the kookaburra has a set of interesting behaviours.

At the onset of maturity, two kookaburras pair up with the intention of raising a family of their own. These two birds build their nest even as mating begins. In kookaburras, parental care is a team work. It not only comes from the parents to the new bird which is usually helpless at birth. Older offsprings of the same parents are also known to assist their parents in providing care for the young bird until it is able to fend for itself.

It is their choice of food.  It does not eat fish as one would expect. And since it does not eat fish, it makes no sense for it to live close to water bodies.  On the average day, its catch looks like this. It rises from its slumber—that is if this bird really sleeps— flutters it wings and flies to the top of the nearest gum tree. Sitting on it, the kookaburra trickily observes its environment as it seeks signs of any moving creature which is a component of its menu.

Owing to its dull appearance, most of its preys often assume it will be too weak to give them a chase while some will miscalculate its apparent dullness for laxity. At the slightest mistake from its prey, such as getting too close, the kookaburra strikes. At a most incredible speed, it plunges toward the unwary prey and most often, it picks the prey up with its powerful beak even before the prey has the chance to attempt an escape.

So far we have learnt a lot about kookaburras, ranging from their natural habitat to their diet. It is now time to examine even more facts about these birds:

They Have Long Beaks

For birds as small as the kookaburra, one does not expect long beaks but this is exactly the case with these birds. Kookaburras have long beaks which on the average are  10 centimeters long. This beak is used to kill and eat its preys, and activity which starts by it swooping down mightily then picking the prey up with its beaks

They Don’t Eat Fish Even as Kingfisher

As the largest member of the king fisher family, it is expected that kookaburras will not only eat fishes, but will eat even bigger fishes but this is not true. Not in the least. Kookaburras, unlike what you would expect, do not eat fish. They find red meat more comfortable especially meat from lizards, snakes, rats and mice.  And since they eat meat, they live on land where they can easily get a hold of their prey.  May be this is why they don’t bear the name “Kingfisher”, or maybe not. Either way, they are the kingfishers that don’t fish.

And they really do. This is probably the most obvious feature of the kookaburra, and what it is most known for. In fact, one species of this bird is called the laughing kookaburra.  But how does this come about? Every bird has a unique kind of sound it makes and this bird is no exception. However, the characteristic sound of this animal looks like the sound of laughter for an adult human. For unsuspecting visitors to Australia, they could think someone is maniacally laughing at them from a distance, or even taunting them.

Most birds are born weak, fragile and frail, this is the same with kookaburras. But then, most birds are born with at least some tufts of hair on their bodies. The same cannot however be said of the kookaburra. At birth, they do not have any feather on their body, and not only are they featherless, they are blind. Owing to this helplessness, they greatly depend on their mothers for parental care. But what may intrigue you even more is the fact that their older siblings help their mothers in administering the much needed parental care.

They Mate for Life

Kookaburras are some of the many birds that mate for life. For them, just like for most eagle species, there is no particular age for mating, neither is there any room for reproductive unproductivity.  At an early age, say one to two years after birth, a male kookaburra finds a mate which he pairs with for virtually the rest of his life. Since kookaburras live up to 20 years of age, it is then no doubt a fact that they celebrate nearly two decades of valentine together.

And it would seem as though this mating is essential for the survival of their specie. Knowing that not more than 5 such birds are born every time the mother lays eggs, nature has somehow compensated the specie with continuous and frequent mating activities.

Live in Pairs of Small Groups

Kookaburras are egregious. This means they are not lone rangers. They love the company of one another and to that end, they often stick together. It is easy to sight two or more kookaburras flying together if you take a walk in East Australia in the evening. They move and live in groups of 2 or more. 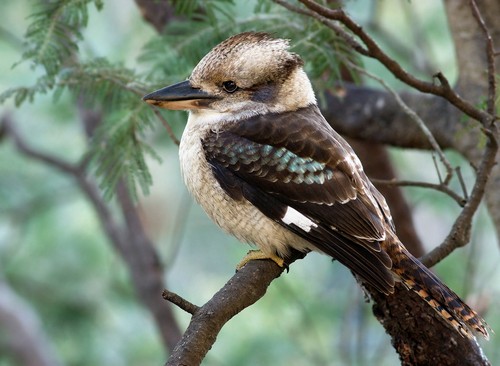 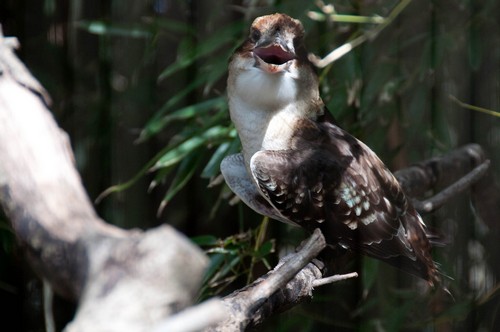 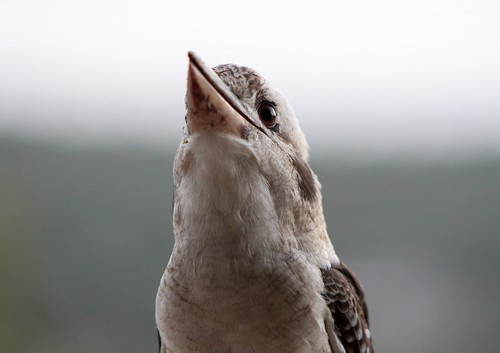 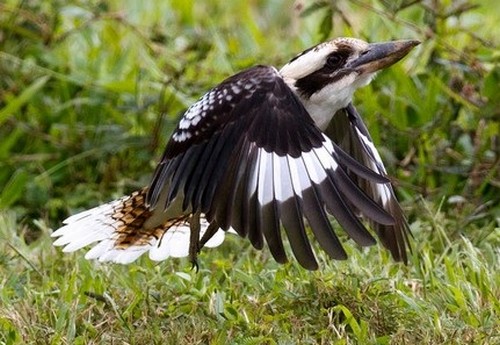 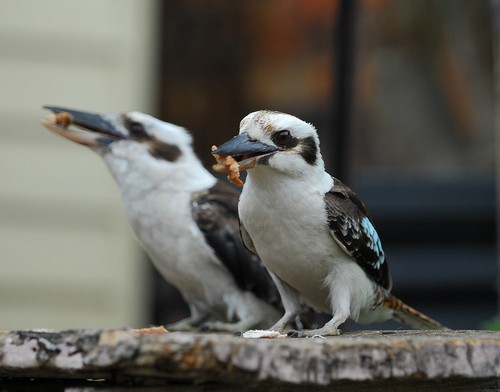 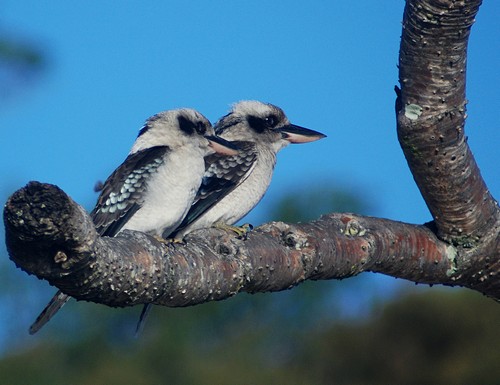 They Laugh in Group From Dusk till Dawn

This is no joke. These birds have a lot of energy especially that kind of energy needed to make some noise from dusk till dawn. To clearly define their territories as well as warn intruders of impending danger, they engage in some group laughing to make their message clear. To do this, a group of kookaburras, about 4 to 20 or more usually come together to laugh at the top of their voices.

They go at it tirelessly from night till morning! You can imagine how taunting it would be if such maniacal laughter sounds just by your window from dusk till dawn. Weird isn’t it?

They Can Live for up to 20 Years in Captivity

Like many birds such as the bald eagle and macaw, they live very long and successful lives. Some species that have been captured and studied have shown longevity of up to 20 years. Some have proven that they can live longer than that too.

They have an interesting nickname. And what could be funnier than to be called “the Bushman’s Clock”? And how they got this name is definitely not a puzzle. Kookaburras, as have already been hinted, come together at nights to laugh in groups. This laughter starts from a certain hour in the night and last till the early hours of the morning. Owing to the consistent accuracy of their laughing, it has become an incredible tool for the bushmen of Australia especially before civilization became widespread. 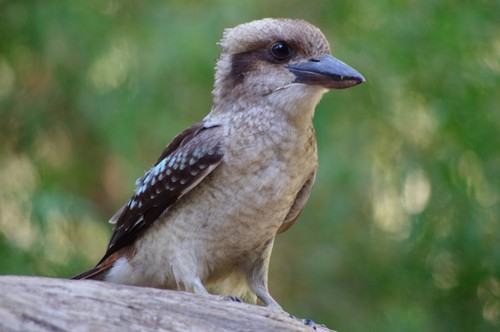 Once in awhile, the regular bird goes for a drink of water at the nearest stream or spring. This water they drink helps them digest their meals faster. But the kookaburra seems not to be a fan of this philosophy; neither does it look like it is joining “Team Water Drinkers” anytime soon. Since it gets all of its water from the food it eats, the kookaburra does not have to drink water separately.

Like most birds out there, the kookaburra is an interesting creature to watch on a good day. They are not just funny in appearance, but fun to behold. And since scientists say they are not endangered in any way, we sure have centuries more to behold these interesting birds. However, this does not mean they are not under threat from predators. Foxes and dogs are known enemies of this bird and would do anything to have a piece of them. But this is not what they worry about as they can easily fly away from their predators’ range. The real problem they could face is climate change and environmental degradation which threatens their very existence.