For centuries people have misconception that koala is a bear which is not true. Koalas are herbivorous marsupials that spent most of their time unnerving on top of trees. Koalas don’t usually pay fellow koala a visit unless for breeding purpose. Their fur is usually thick and ash grey with specks of brown illuminating from the body. Koala is an aboriginal term which means ‘no drinks ‘this is exhibited by the fact that koala can survive without drinking too much water. They get water from the eucalyptus leaves they eat.  Occasionally koalas take a drink during the dry spell, when sick or when the leaves contained inadequate liquid content.

Queensland, New South Wales South Australia, and Victoria are the common places where koalas can be spotted. koalas are known to be solitary, spending the entire day sleeping with some few hours spared for feeding. The animal being entirely nocturnal sleeps during the day and awake during the night. As mentioned, they spend most of their time sleeping for about 18 to 20 hours during the day. Koalas’ sleeping posture depends on the climate in order for them to conserve their body energy.

Trees are well-matched habitat for the koala. With an outstanding ability in balancing its body when climbing trees, koala has a lean and muscular body with physically powerful limbs to aid in climbing trees.

The paws of the koala are specially adapted for grasping and climbing trees with rough pads on the palms and soles facilitating tight gripping of the tree trunks and branches. Each paw front and hind have five digits with each paw having long and sharp claws. One of the amazing physical makeup of koala is the opposable two fingers. The front paw has five fingers with two of them being glued to each other.

Unlike the human’s thumb, the two fingers are able to move opposite to the other three fingers. This allows the koala to have a tighter hold on trees and branches. The big toe on the hind paw is clawless with the second and third hind toes compound together to create a glooming claw.

Changes in climate is a common element that affects nature with either an increase or decrease in temperature. Koala has a thick wooly fur that insulates it from the changing weather. The wooly fur also acts as a raincoat to fend off moisture when it is raining. The bottom of koala has fur which is solidly packed to cushion the animal from tough branches. Mature male koalas have a scent gland at the center of their chest that breathe out dark and sticky substance which they rubdown on trees to mark occupied territory.

The forest is home to many poisonous plants and eating such may kill the animal instantly. Koala has one of the most important components in its body, the nose which it uses to winnow out gum leaves and detects those which are poisonous.

The digestive system of the koala is specifically modified to destroy the harmful substances in the leaves. Research indicates that these poisonous chemicals are synthesized by the plant to protect it from insects which chomp through the leaves. Trees which grow on loam produce fewer poison, this could be used to explain why koalas don’t feed on all eucalyptus plants and sometimes shun some which grow on certain type of soils.

Koalas are believed to be the awesome consumers of the eucalyptus leaves which is true. With hundreds of varieties that the koala is allowed to eat, only 30 of the species are found recurrently in koala’s diet. They roughly eat about 200 – 500 gms of leaves each day.  The leaves of the eucalyptus tree are awfully lethal but they have a compound digestive organ called the caecum that has been aligned with bacteria that controls the breakdown of the poisonous leaves without being harmed.

Nature has also collaborated with the koala to equip them with special adaptations.  Eucalyptus leaves are very fibrous and low in nutrition and since koala’s metabolism is very slow it allows them to retain food in their digestive system for a long period of time, sleeping of 18-20 hours also played a major role in preserving their body energy.

Trees such as Melaleuca and Acacia leaves are also found in the koala’s menu. Eucalyptus is the main diet of the koala which is enriched with proteins that favor the growth of koalas. Hardly do koala drink water and yet they are not dehydrated. They get their water from the leaves they feed on. Startling fact about koala is that the female can survive with only water which they can get from the leaves they eat. The males, on the other hand, take a bit more than they sap from the leaves.

Dissimilar behavior portrayed by the marsupials from other mammals is that they conceive immature young ones that grow and develop inside their pouch. Marsupium is a Latin word which means pouch. It’s important to note that not all marsupials have a pouch to nurture their young ones.

Once conception has taken place, it only takes 33 to 36 days before a Joey is born. Joey is the newborn baby of a koala. The underdeveloped Joey is approximately two centimeters long with less than 1 gram of weight. The new baby is hairless, blind, no ears and pink jellybean shaped with properly developed senses of touch and smell. Inside the pouch, joey attaches itself to the teats and will suck the nutritious mama’s milk for six to seven months and enjoy the comfort of the pouch for an extra six more months.

After 22 -30 weeks, Joey begins to feed on pap. Pap is a fermented vegetative substance from the mother’s caecum. Feeding on the pap allow the mom to pass micro-organism to the infant digestive system which is important for the breakdown of the lethal eucalyptus leaves. Pap is nutritious and enrich with proteins.

10 years is the average lifespan of koalas. The lifespan of the female is generally longer compared to the male because of the stresses brought about by fighting during the breeding season. The mere fact that they move around more than females in search of mates, it puts them in increased danger from predators.

Another factor that affects the lifespan of the koalas are when their teeth get broken down from eating tough eucalyptus leaves, since they don’t grow back, they can no longer grind the leaves down properly and can’t get enough nourishment from them, resulting to death because of starvation. 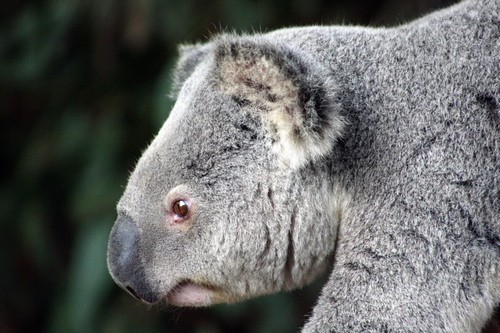 Female are considered mature at about two years of age and males at the age three or four years. By this time the koalas are considered matured and have to live and look for their own dwellings. Not all females in the koala population breed every year with the majority being older females that conceive approximately two to three years.

Human beings are not the only creatures that have been credited with the ability to communicate. Koalas have been known to communicate with fellow family members by bellowing. The voices travel long distances with each sound driving home a particular message. Deep grunting bellows are mostly used by the male to signify territorial dominance. Males preserve their energy which ought to have been used for fights for bellowing their superiority and this gives predators and other animals an upper hand in locating them. 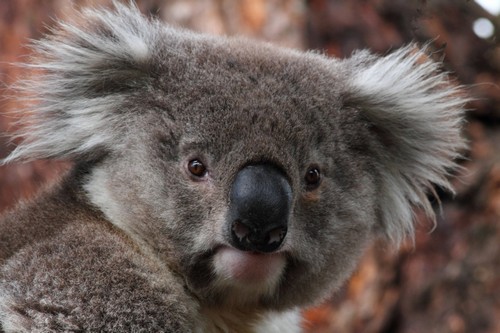 Female rarely bellow unlike their male spouses, but the urge of nature forces them to bellow to show aggression. Bellowing is also aligned with sexual behavior often calling for a fight. Mothers communicate with their young ones by producing soft clicks, squeaking, and droning or murmuring gently to each other with gentle grunts expressing irritation or discomfort.

Koalas share a particular cry in common which is induced by fear. The sickening cry resembles that of a baby screaming and is usually made when animals are under threats or anxiety. Koalas rub their chest on trees to produce a scent which marks the tree as taken. Some koalas have been seen dribbling urine on trees to mark them as occupied territories. 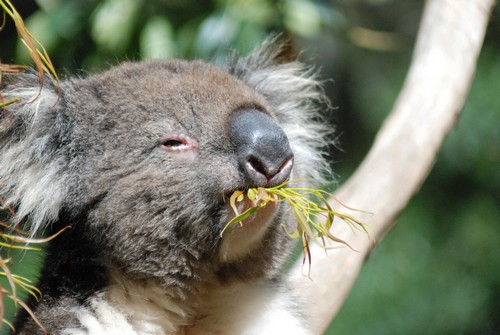 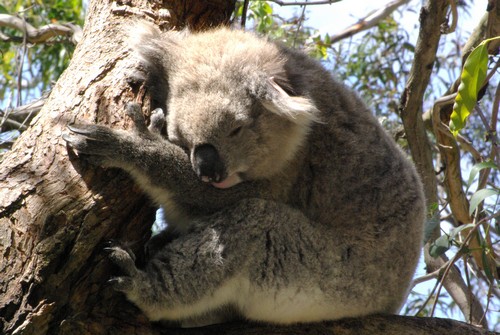 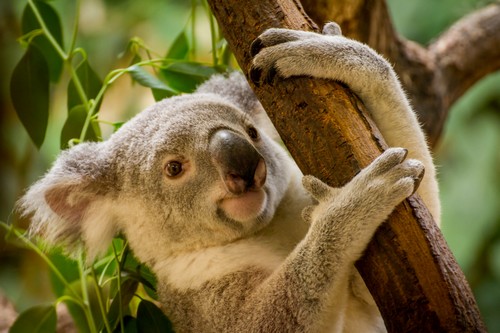 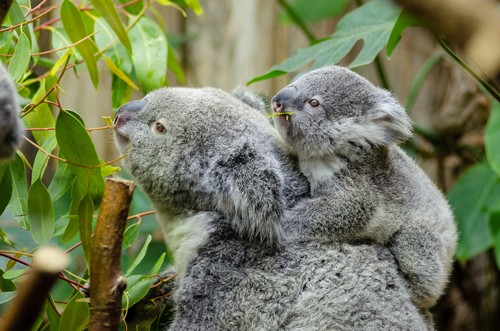 Life on the Tree

Koalas spend most of their time on trees sleeping or feeding on leaves. Because of this, nature has equipped them with specific adaptations to make this possible. On the front paw, they have five digits which oppose the others, resembling the human thumb. The digits help them hold onto their food and climbing. Sometimes koalas tumble down trees with the bottom part facing the ground. Regularly they come down to change trees or refresh themselves with a drink. Predators such as foxes or dogs take advantage of this to make a meal out of them. 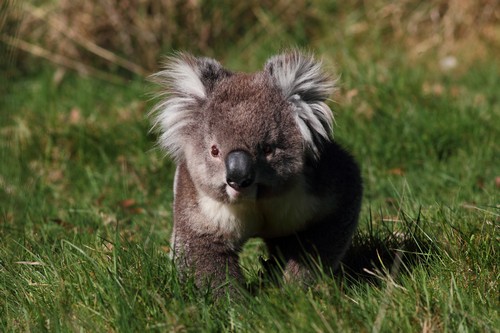 Eucalyptus leaves is the basic diet for koalas. For a number of years, most of the forest has been cleared threatening the existence of koalas. Forest clearing is decimating the number of koalas in the green world. Disturbance by human beings is another threat that is putting the life of many koalas on the line. The animals lose their habitat, run down by cars and exposed to diseases by the clearing of forest for settlement by man.

Diseases such as pneumonia, reproductive tract infections for female koalas that result to sterility, is spread by Chlamydia organisms which is also threatening the existence of koala. Bush fires are common during summer and a single spark can eliminate an entire colony within minutes.

At a recent time, there are programs by different conservancies that protects koalas’ population.