KinkaWhooo??? Well as funny and tricky as the name is, this quirky little creature is no less cute and fluffy. This cute little creature is a descent of the raccoon family and resembles to that of a raccoon or a wombat, the only difference is that kinkajou generally found in the tropical forests around the Central and South American countries.
So come, let us explore more of these cute creatures and get ourselves more accustomed to them! 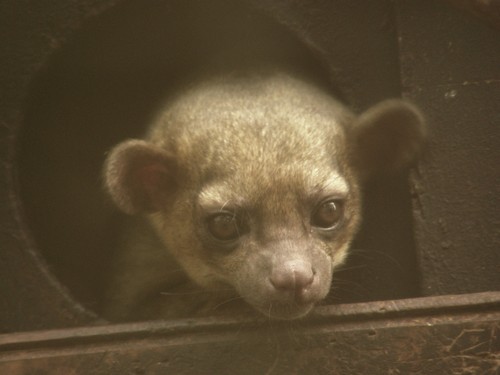 These kinkajous generally dwell in the tropical as well as the sub-tropical forests of the Central and the South American continent, spending the most amount of their time hanging and swinging around on the trees.

These little creatures have been blessed with a unique feature which shows that they are extensively adapted as per the requirements of the environment they live in. The kinkajous have this ability with their feet, where they can turn the feet on the rear direction, turning their entire feet at an angle of approximately 180°. This ability is very helpful for the kinkajous in the sense that due to their turning feet, these kinkajous are able to run around very easily in both forward and backward directions, and also along the branches as well as going up and down on the trunk of the trees.

Just like the tail of a chameleon, the tails of these little kinkajous are also very much modified, keeping in mind the habitat it dwells in. They possess a gripping and a prehensile tail which the kinkajou can use just like an arm.

It is very unique in the sense that the kinkajous use this tail of itself for a wide array of activities, but the most important of them would be to hang themselves into the trees. They also use the tail in order to provide them balance and can also use it as a soft and cozy blanket during the time while they have a nice sleep in the high altitude canopies.

After reading these characteristic features and behaviors concerning a kinkajou, it may seem that they resemble to that of a primate, but actually the kinkajou belongs to the raccoon family. 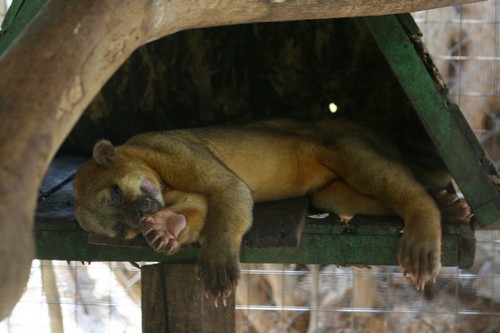 A very unusual activity has been found out regarding the kinkajous. These kinkajous have a great affection for the honey and in order to get that, they continuously raid the honey bee’s nests. This act of them has earned them a nickname, the honey bear!

The kinkajou uses its long and skinny tongue to suck the honey from its hive. But this is not just it, the kinkajous also use their adapted tongue in order to remove the termites and insects that enter their nests.

The common diet of a kinkajou may include some fruits and little mammals, but Kinkajous also eat small mammals and fruits, which they tend to catch with their deft  sharp claws and front paws. They are usually nocturnal and are mostly seen roaming about during the nighttime, returning to the earlier used trees as their sleeping place by the morning.

The kinkajous shape treetop gatherings and share as well as convey various social communications, for example, equal preparing. The kinkajous are mostly vocal creatures, however rarely observed. They are regularly heard shrieking and yelping in the tropical backwoods regions including the highest canopies. 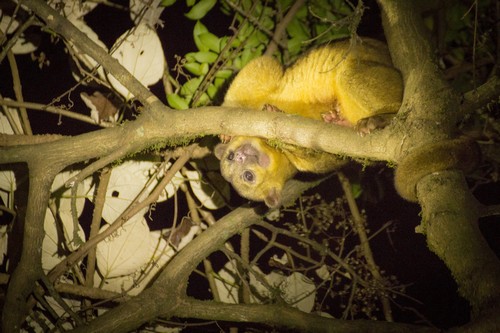 The female kinkajous are generally known to give birth to the new ones around the time of spring or the summer. The new off springs are born with shut eyes, and they are not able to see anything for approximately a month. 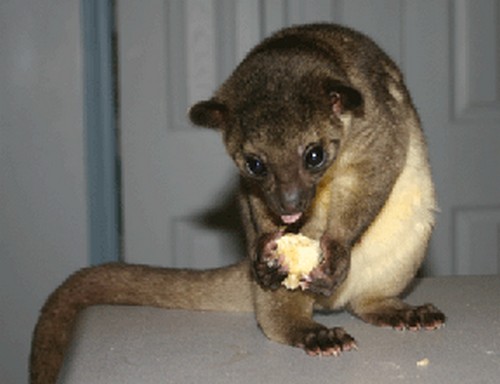 What’s on the menu?

It is very fascinating to see that although being a carnivore, these kinkajous do not depict any characteristics of a carnivorous animal. Rather, it prefers to go by the herbivorous diet.

These kinkajous are equipped with the canine sets of teeth, confirming its existence as a carnivore, but these kinkajous mostly strive on various fruits and the nectar of the honey bees’ hive. They been seen to consume the eggs, small insects, vertebrates and other little hatchlings on very sparse occasions, when they are not left with any fruit or nectar nearby.

These kinkajous have been gifted with a 13 centimeters long tongue, courtesy of which it easily reaches the most unconventional spots and satisfies its appetite by sucking all the tasty honey from the beehives and the nectar from the flowers.

Their short lengthened, thick hide gives a characteristic security to these kinkajous from the painful honey bee stings. Their skillful paws help them control their food and other preys.

Kinkajous have been given a very skillful tail which is prehensile and tight-gripping and they use it regularly to hang by their tail while going after their next bit of fruit or nectar. 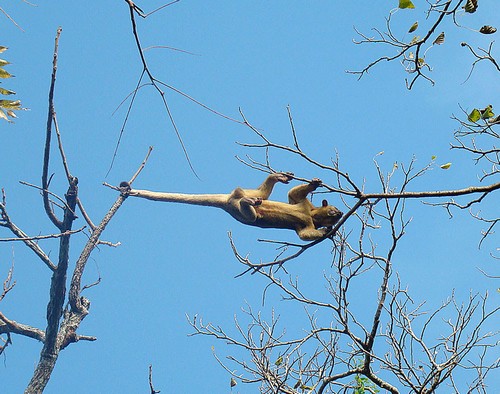 It has been found out that these kinkajous play a very major role in its surroundings by acting as a major pollinators.

They have a habit to go from one flower to another to drink its nectar, and it is during this course that the pollens of the flowers get stuck to their faces, and when these kinkajous travel to the next flower, the pollens from the previous one comes in contact with the newer flower and the process of pollination takes place.

Their searching propensities drive them to go between a bunch of different trees every night. A few kinkajous may meet and search together at similar site, if there is sufficient fruit products for everyone to share.

It has been discovered by the scientists that these little kinkajous are mostly solitary loving creatures. They do not prefer to say in a collective group and are mostly seen hunting and roaming alone in the forests.

But there have been some deviations and some groups of kinkajous have also been spotted, which tend to feed together on the fruits of the same tree. Some of them also gather and socialize with the others of its kind. These socialized kinkajous are generally known to play with each other, groom up and are even found sleeping with their group in the same trees. 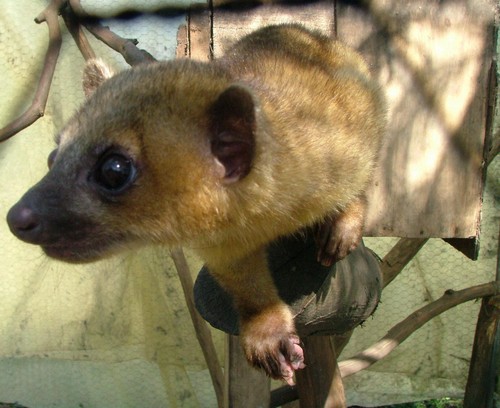 A normal kinkajou social gathering incorporates two male kinkajous, a female and an off-spring. Whether they are alone or in a little gathering, kinkajous ordinarily venture to every part of similar course every night and tend to adhere to their own region.

Fragrance organs at the side ends of their mouth, throat and the belly, help kinkajous check their domain.

These kinkajous are very difficult to study for their behavioral patterns, this is due to the fact that they are generally nocturnal and solitary loving animals. They are very picky when it comes to their lifestyle.

This is evident for the fact that they hardly come down from the branches of the trees they dwell in. Rather, they tend to travel from one tree to another via the connecting and the overlapping branches.

While in the daytime hours, these kinkajous tend to find a hole or crook in the trees in order to sleep or else hide inside it; consequently the kinkajous may use the earlier used spots or try to find new ones for this purpose. Rather than using a hollow tree or a crook, some of the kinkajous prefer to make small nests on the branches of a palm tree. 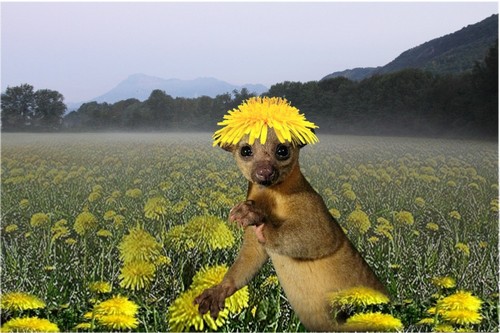 The kinkajous have been given a very flexible neck and upper body, courtesy of which these kinkajous are freely available to curl themselves up into the tightest spots and the most unconventional positions.

They are always found taking a nap alone during the day or else, very rarely it is seen sleeping with a group, which cements its feature being a solitary-loving, yet socialized creature.

The kinkajous turn out during the evening to extend and scratch before starting their mission for food or prey. Just before dawn, they return to their safety base in order to take some rest or a little nap. On the off chance that they get excessively hot, the kinkajous uncover their stomach and exposed cleaned palms to get a cooling and soothing breeze which cools down their entire body.

The most crucial way through which these kinkajous tend to communicate with each other is via the scent. The kinkajous have inherent glands which can sense various scents, present around their mouth, throat and on their stomach.

Making typical noises such as growling and grunting, are the other ways through which the kinkajous communicate with one another.

Amid the night time, the kinkajous are often found vocalizing and screaming. Their high pitched calls compares to that of a woman’s shout. Therefore, one nickname for the kinkajou is the ‘la llorona’, a name which interprets specifically from the Spanish language into ‘the crying lady’.