Iguanas are docile large genus of lizards, which is native to Mexico, Central America, the Caribbean, and South America as well. These egg-laying animals are cold blooded, like most other reptiles, and have a unique ability to adapt and camouflage in their environment.
There are several species of the Iguana, the most popular being the green iguana. Other species of the iguana family include the Galápagos Islands marine iguana, the Desert iguana, and the Fiji Island banded iguana. 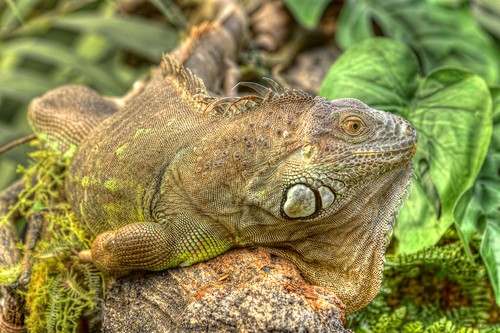 Iguanas are tree dwelling animals, and like to bask high up in tree canopies. Younger iguanas establish their own territories lower in the trees while the older reptiles live highest up the trees. Iguanas seldom come down to the forest floor except when females want to burrow to lay their eggs. They can easily adjust to any habitat they are brought into though, and like to have water bodies around them. They will often bask on branches overlying water bodies, and will drop into the water once they sense a predator approaching. Iguanas are very good swimmers, with limbs well developed to travel in water fast.

Most species of Iguanas have rows of spines on their backs and tails, which is used to defend themselves against predators. They possess strong tails which can be used to deliver powerful strikes. Like most animals in the lizard family, when grabbed by the tail, the iguana possesses the ability to break off its tail to escape. The tail will be regenerated and eventually a new tail will grow back on. 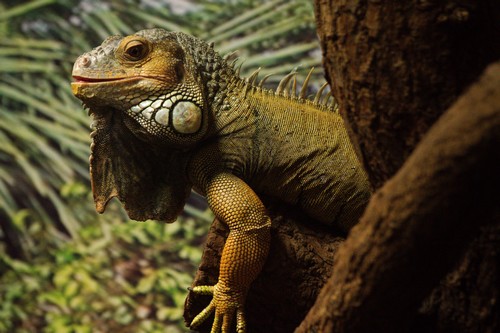 Different species of the iguana have different characteristics unique to them. Some species such as the green iguana has a sack underneath their mouth, known as a dewlap. This sack is used to regulate body temperature, and also used during courtship displays and territorial fights.

Iguanas have a great vision, and they can detect motions and shapes at long distances, to enable them flee from predators on time. They do not see very well in low light conditions, however they possess the ability to see ultraviolet wavelengths. This is used while basking to find the perfect spot, so as to absorb enough sunlight to produce vitamin D.

Iguanas possess a photo sensory organ on the top of their heads, which is known as the third eye, or the parietal eye. This third eye is sensitive to changes in light and can be used to detect movement, even in the dark.

Most other animals in the lizard family has lost this feature through years of evolution. The iguana possesses tiny sharp teeth used to shred leaves. They are broad and sharp, and are located in the inner sides of their jawbones.

Due to the fact that iguanas cannot secrete concentrated liquid urine, to rid their body of excess wastes such as potassium, they instead have a nasal gland used to remove these substances. Some species of iguana have small horns between their eyes and their nostrils. The sizes of the iguana varies between species. The much larger species such as the green iguana could grow up to 1.2-1.7m in length, with the tail included. Males usually weigh more than females, with an average male iguana weighing about 5kg, and an average female weighing up to 3.5kg. Iguanas vary in color from one specie to the other. The color of iguanas also varied based on their health, temperature, social status or mood. During the morning hours when they stretch out to bask, their skin color will be relatively darker. This is believed to enable them absorb enough heat from the sun. At midday, or when the sun gets hotter, iguanas change to become lighter in color, in order to reflect the excess sunlight, and thereby reducing the heat they absorb. Also, iguanas with a higher social status are always darker with those with a smaller social status. 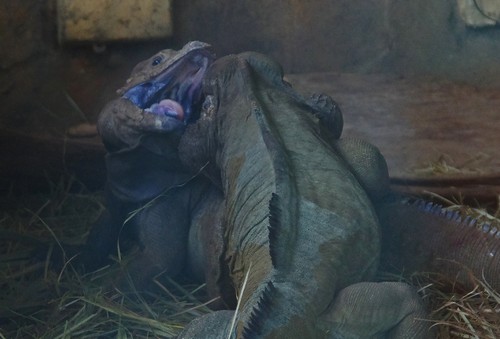 Iguanas are known to breed during the dry season, so as to ensure their young ones hatch in the wet season when food is in abundance. They attain the age of sexual maturity at about the age of 4, although some species can become sexually mature earlier. During courtship, males exhibit behaviors such as nuzzling or biting the female’s neck, head bobbing, or expanding and contracting the dewlap. Conflicts often arise in the territories where the courtship rituals happen. The successful males will mark their territories and the females with a substance secreted from their femoral pores.

During mating, male iguanas approach the females and mounts then, then grips her shoulder with his teeth to restrain the female. This sometimes leads to wounds on the neck of the female. Copulation may last for several minutes, and a female iguana may save the sperm for some time, allowing her to fertilize her eggs at a much later time.

Females are ready to lay their eggs after about 65 days from the time of mating. A female might lay as much as 65 eggs over the space of three days. The eggs are 15.44 in diameter, and about 40mm in length. The eggs are deposited into the already dug burrows, and sometimes nests may be shared if there is a limited nesting area. 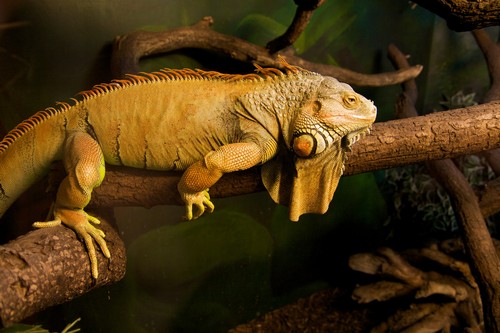 The incubation period for the eggs lasts between 90 and 120 days, after which the young iguanas hatch. The hatchlings break the shell using a special temporary tooth known as caruncle, and this tooth falls out shortly after hatching. Iguana hatchlings are left to fend for themselves from birth, and their mothers do not come back to pick them up after hatching.

Most disputes that take place among iguanas are for basking sites. Basking is very necessary for iguanas to keep them warm, and also to aid in their digestion. However good spots for basking are not always enough, so they would often engage in confrontations, lashing out with their tails or biting just to secure a good basking site. During breeding seasons also, males become territorial, and will engage in fights to win females over. Often times, they don’t get injured during these fights, as the weaker opponents often withdraw before things become very intense. 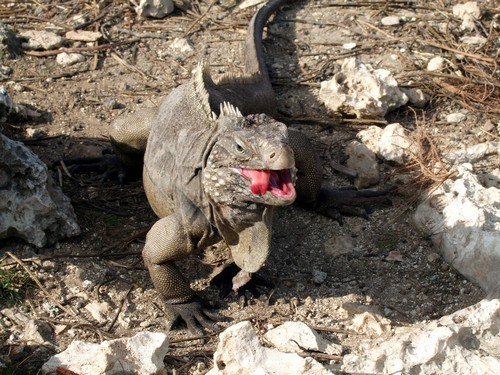 When frightened by a predator, an iguana will often freeze or try to hide. Due to its natural coloration which fits in perfectly to the background of most forests, iguanas easily become invisible to predators. They can blend into the forest and remain very still till a predator passes. They prefer to bask around water bodies, and being good swimmers, they will usually dive into the nearest water body and attempt to swim away when approached by a predator. When cornered however, iguanas will puff up their body to look more menacing, hiss, and head bob towards the predator. They lash out with their tail and may use their claws to defend themselves, depending on the threat they are facing.

They might even drop off a part of their tail to create a distraction and escape, when faced with a much larger predator. The tail normally grows back within a year, but not to its former length. Iguanas use visual displays such as head bobbing to communicate, but they sometimes use hisses to communicate as well.

Iguanas have a very tough skin, and they are strong enough to drop from a height of as high as 40 feet and survive. 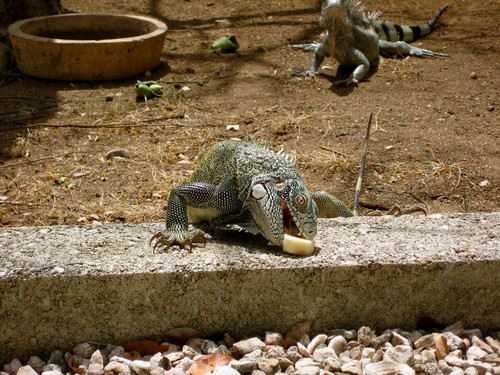 The diet of iguanas consists mainly of fruit and leaves. With the exception of certain species such as the Spiny tailed iguana, which feeds on insects, and a few other species that can feed on meat, iguanas prefer fruits that are easily digested, tender young leaves and flower buds. They use their tongue to manipulate food and will often swallow their food whole with little chewing. The swallowed food will be mixed with enzymes in the stomach then moved to its small intestine, where its microflora will break down the food and makes it available for consumption. In their early years, iguanas require a lot of protein to develop, and during this period, young iguanas will usually eat mostly insects and other small invertebrates. They depend on the external temperature to digest food. During low temperatures, the digestive enzymes found in the stomach of the iguana are highly inhibited. 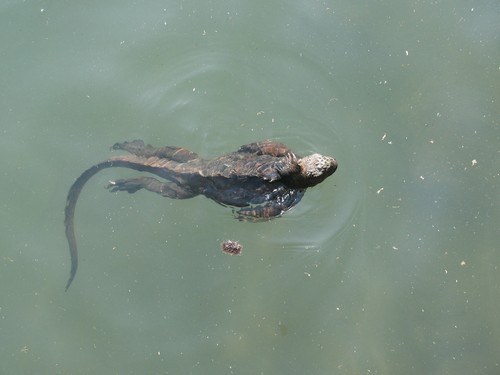 Although no specie of the iguana has been listed as endangered or extinct yet, their numbers are steadily diminishing in the wild. Some specie populations have dropped due to the high demand of iguanas as pets. They are also poached for their skin which can be turned into luxury leather, and be made into belts, bags and shoes.

They are also farmed in some areas as a food source, and due to the high adaptability of iguanas, they survive well in captivity. They are referred to as “chicken of the trees” in some parts of Central and South America, because their meat is believed to taste like chicken. Iguanas are very difficult to take care of in captivity, and when not fed with the right nutrients, most of the time they die within their first year as pets.