Hummingbirds are very small birds, classified into the family Trochilidae. They are very unique birds, with about 320 currently known different species, and they reside throughout Central America, South America, and the Caribbean. They bear the name Hummingbirds due to the humming sound which they make while flapping their wings at high frequencies.
We will be looking at some of the characteristics that make this bird incredibly unique, despite its size.

Hummingbirds generally occur in the tropical regions of North, Central and South America. Some of the species can also be found in more temperate climates. Their habitat differs depending on the species, and they can be found in tropical forests, woodlands and grasslands. Some species thrive in high altitudes, and can be found in the South American Andes Mountains, an area which stands up to 14,000 feet. Ecuador has the largest number of species, and about 163 species of hummingbirds are found there. A large number of species can be found in Colombia as well, while about 50 species are native to Mexico. A majority of the species which breed in Canada and the United states migrate during the fall season and spend the winter in Central America, to avoid the freezing temperatures.

It is currently the smallest bird species in the world. In contrast, the largest hummingbird, which is known as the Giant Hummingbird grows up to 8 inches in length, while weighing about 20 grams. In most species however, females are usually larger in size than males, with longer bills as well.

Their bills are long and curved, with some species possessing bills adapted for the flowers found in their habitat. Sword-Billed Hummingbirds have very long bills, which is due to the deep petal flowers found in their habitat, while other species like the Thorn bill has a short bill, because they feed on flowers with short petals. Both the lower and upper bills overlap, and during feeding, the bill is opened slightly, to allow their grooved tongues collect nectar from flowers.

There are a few albino hummingbirds in the world, and they possess completely white feathers, with fair legs and red eyes.

Male hummingbirds are have more brightly colored feathers, while females possess duller feathers, which aids them to effectively camouflage while breeding. Both males and females have long slender wings adapted for high agility in the air. The joints at the shoulders and elbows are located very close to the hummingbird’s body, and this allows it to change direction mid-air and also to hover. Their legs are very tiny, and they cannot walk, instead, they hop.

Hummingbirds have an amazing vision, with the development of a dense array of retinal neurons, which aids them to speedily process visual information while flying at high speeds. They depend on the direction and orientation of their visual fields to hover at a place precisely.

Diet and Feeding of Hummingbird

The main diet of hummingbirds is nectar, a sweet liquid found inside flowers. Hummingbirds require a lot of energy to survive, so they rely on the sugar found in nectar. They are very selective feeders, and will not feed on flowers which produce nectar containing sugar less than 10%, they often go for flowers with an abundance of sugar in its nectar.

Their bill is shaped to go all the way down in order to collect nectar from the flowers. Their tongue has grooves used to collect the nectar, and might dart into the flower up to 13 times in a second, to pick up nectar.

Hummingbirds are renowned to have the highest metabolism rate of any bird species, but when not searching for food, or when food sources are scarce, they birds go into a state much like hibernation, known as torpor, to save energy. Due to their high metabolism rates, they require large amounts of food to survive. Some species of hummingbirds might feed on nectar as much as twice its body weight per day.

They become territorial with flowers that produce high quantity of sugary nectar, and may fight with each other over these flowers. The birds also feed on small insects and spiders.

Hummingbirds have some unique behaviors which sets it apart from other birds. They are very acrobatic flyers, due to the adaptation of their bones and flight muscles, they can rotate their wings in circles, allowing it to fly forwards or backwards, upwards or downwards, or even to hover at a place.

When compared to other birds, they possess the largest heart, brain, breast and flight muscles, in proportion to body size. Due to their high rates of metabolism, they have an increased heart beat rate, and can have up to 1200 beats per minute.

They are very vital in the pollination process of flowers, and due to their feeding habits, the often air in the transfer of pollen between flowers to help them reproduce. Due to the amount of nectar they may consume per day, they require a process known as glomerular filtration to process excess water, and avoid overhydration.

Hummingbirds have a variety of vocals they make, including whistles. Chirps, hums and buzzes, which they use to communicate to each other.  Some species produce ultrasonic sounds, which is believed to be used to disrupt insect flying patterns, and allow the hummingbirds catch the insects much easily.

Irrespective of their tiny sizes, hummingbirds are highly aggressive birds, and will drive intruders off their territory or from preferred flowers. They can attack larger birds, other animals and even humans successfully. 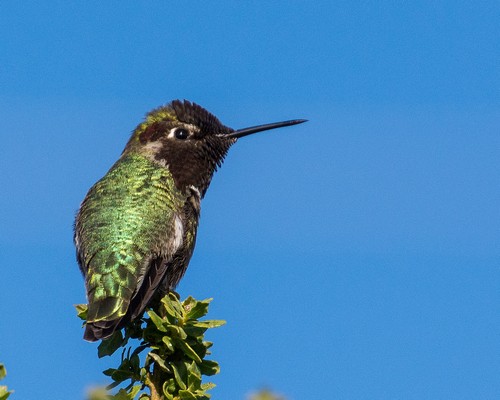 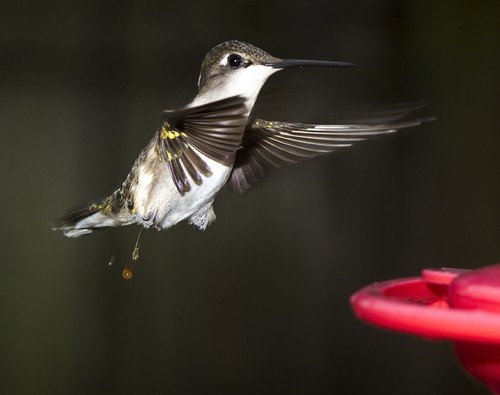 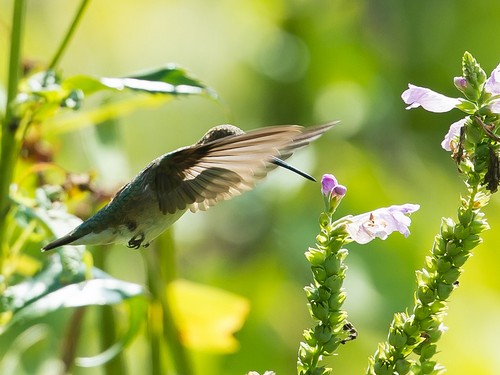 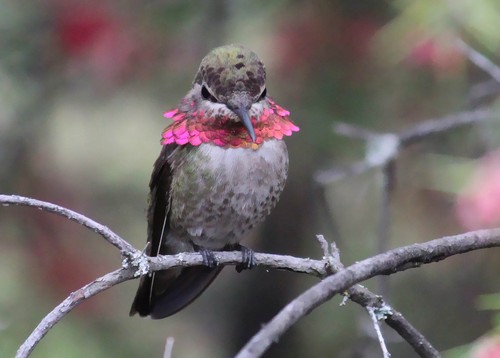 The hummingbird is a generally solitary bird, and does not live or migrate in groups. There are no signs of pair bonding in the birds, and the males are highly polygamous. The male’s only get involved with the reproduction process during mating, after which they abandon the female to build the nest and raise the chicks. The nests are constructed and camouflaged with lichens, moss, twigs and spider webs. The elastic spider webs ensure that the nest expands to accommodate young growing birds. Nests are constructed in trees, usually to the underside of leaves.

Females usually lay two eggs, and the incubation period lasts between 14-23 days, depending on the species, temperature conditions, and other factors. Smaller hummingbirds have shorter incubation periods than the larger birds. Females do not go into hibernation while incubating eggs, as the eggs need her heat to survive. The chicks are born blind with sparse feathers, and have a darker skin. The female protects the young ones and provides them with food until they are about 9 days old. At this point the birds will have grown feathers.

Hummingbird chicks have an instinctive feature of defecating over the edge of the nest, keeping the nest clean. The female will need to feed the babies every 20 minutes with nectar, and undigested insects to provide them with the nutrients need for them to survive. She feeds her young by inserting her long bill into the mouth of the chicks and regurgitates food into their mouth. Females can be very aggressive while defending their young ones, and will attack larger birds and other animals. 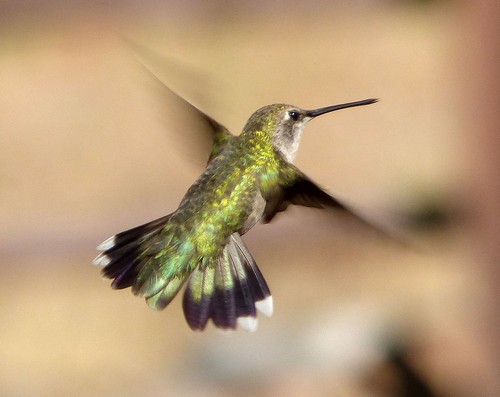 The chicks leave the comfort of the nest when they are about 20 days old. They are tutored by the females on hunting locations and the best flowers to collect nectar from. Females lay eggs once a year, but sometimes they could nest twice a year, depending on how good the conditions are.

Hummingbirds live for quite a long time, considering their rates of metabolism. The lifespan ranges for about 4-6 years, while the larger species can live up to 12 years. Although a majority of the hummingbird species are not endangered, about 10% of its species, which is about 34 species, are threatened with extinction. 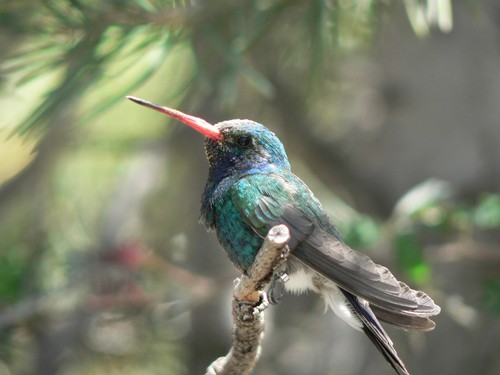 Hummingbirds do not have a lot of natural predators, but they are very vulnerable between the time they hatch and the time they leave the nest. Most of the chicks do not make it through their first year, but those who do have to worry about large birds like hawks, which prey on hummingbirds while they are perching. Other mammals and snakes feast on the hummingbird’s eggs and chicks, especially when the females leave the nest to forage for food. But Hummingbirds are considered not extinct.