What comes into your mind when you hear the word “Gold”? Expensive, Rare to find, Beautiful, large and attractive to the eye, something worth holding and guarding with all your might. All these explain why this eagle bird is not just an ordinary eagle bird but a Golden Eagle bird. Also, known as Aquilas Chrysaetosin scientific terms. The name speaks for itself. Once gold is mentioned anywhere, it means that that thing is worth millions if not billions of money. Gold is very rare and anything associated to gold must be hard to find.  Golden eagle is a very rare bird to find especially in Africa. Gold stands in value ahead of all other jewels and so is this wonderful bird, Golden eagle, no other bird can compare with it as you will find later, from its appearance, to its size, to its speed and to its way of mating and multiplying.

Size and Shape of Golden Eagle

The size and sharp of this golden eagle is amazing. It is very beautiful and majestic. Unlike other birds which are generally small, golden eagles are very large and powerful in comparison to other bird. These birds have six subspecies which vary only in sizes. The large and most attractive are three feet tall. These sub species also vary in body weight but in all species, the male are lighter as compared to the female who are a bit heavier. The average male weight is about 3.6 kilograms while that of female is around 5.1 kilograms. The talons are razor sharp and grow up to around three inches. These talons help it to cut and kill its prey.

The wingspan varies from one species to the other with the largest ranging between six to eight feet.  If you watch the bird flying from afar the head looks smaller than the rest of the body parts. The tail looks generally long. The golden eagle has very powerful feet. It uses these feet to support its body weight and while pining down its prey. The prey cannot escape when being stepped on and pinned down by these strong feet. It also uses these feet to carry the dead prey to the nest to be fed by the young ones and also to its mate.

Golden eagle has calm brown good looking eyes. To match the brown eyes is its yellow beak.  Are you trying to visualize the match, yellow beak and brown eyes? On top of its heads and at the back of its neck it has a lighter golden-brown plumage. If you look at it from afar, you will think it has a crown.  It has dark-brown feathers all over the rest of its body. The young ones have white patches on the wings and the tail which are neatly defined. This explains why they are tourist attraction and why countries where they are found will do anything to keep and guard them.

The Speed of the Golden Eagle

Golden eagle is extremely fast. No other flying bird can beat it at the race.   It flies at a speed of about 241 kilometers per hour. This means that when it is miles high above the sky, with the help of its very sharp eyes, it can spot its prey and with a speed of lightning drop down and before the prey knows what is happening, it is already the food for the day. This speed helps it when it is attacking big animals like the deer.  This is because even if the deer is bigger than the eagle, it cannot compete with the speed at which it is repeatedly attacked and so will succumb and become meal of the golden eagle.

What is Golden Eagle main diet?

Golden eagles are carnivorous and their main diet is small animals and insects. These animals include marmots, rabbits, squirrel, mice, rats, foxes and other small birds. They also feed on carrions, fish and reptiles. All this depends on the area they are in at a particular time. During the dry season when these small animals are not available, they attack and kill big animals such as deer. The golden eagle also attacks other animals in defense of its prey. This means that other animals like the leopard, cheater which feed on the same preys as the golden eagle find themselves at war with the eagle as it tries to protect its prey. The strong beak enables it to kill its prey with their powerful and razor sharp talons and feed on them.

The answer is, no; golden eagle is a very calm bird. It is not dangerous and cannot attack human beings, so don’t be afraid. If you look at this bird when it is resting together with its mate because it is rarely alone, you may think that it cannot hurt a fly. It is calm and peaceful. With eyes that look peacefully on someone. Apart from its prey and those animals that they compete for their victims (small animals), golden eagle does not attack people or other animals unless provoked.

How does Golden eagle attack its prey?

The golden eagle flies high into the sky. With its very strong eyesight it can spot its prey many miles below. With a speed of lightning, the golden eagle drops down.  This time it carves its wings to a “v” shape and the tip feathers of the wings spread like fingers. With its whole weight and its powerful feet, it can hold and pin down its prey. Then using its razor-sharp talons, it cuts its prey killing it instantly. How big or small the prey is, none can escape this majestic powerful bird. Using its powerful sharp beak, it cut its prey into pierces and feeds on it. Many Ranchers have for long feared that it would attack their livestock and used to kill this golden eagle, until  a law was passed to protect it in all countries where it is found. 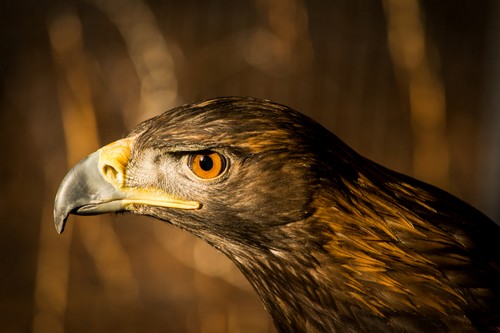 Golden eagles are monogamous and are mostly found in pairs. Unlike other animals which change their mate, golden eagle stays with their partner for many year and mostly for life.   They build huge strong nests on high places like on top of big large trees, poles and cliffs. They use these huge nests to lay eggs and incubate them not once but for many seasons. The female lays between three to four eggs. Both the male and the female later on incubate them for between 40 to 45 days. Mostly only one or two young ones survive. They also use these huge nests as their home during the night. The main reason why they build these strong huge nests and in high places is in order to protect their young ones and the eggs. 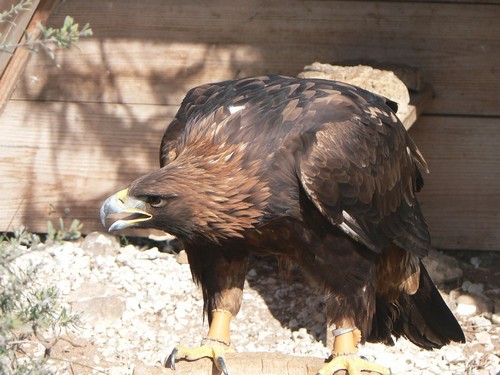 Golden eagle prefers to live in the country side, especially in mountainous places and canyons. They live in different climatic regions ranging from very cold weather to hot weather like in the desert. They adopt well and are not affected by climatic changes. They don’t stay together in large numbers. They stay in pairs. One pair may occupy a space of between 155 to 200 square kilometers. They don’t often migrate and may live in the same place for many years. It is from their territory that they get their prey. It is only during very dry seasons when they no longer get their food that they move to other places. Some who live in places that are never dry do not migrate. They stay in those places year after year. 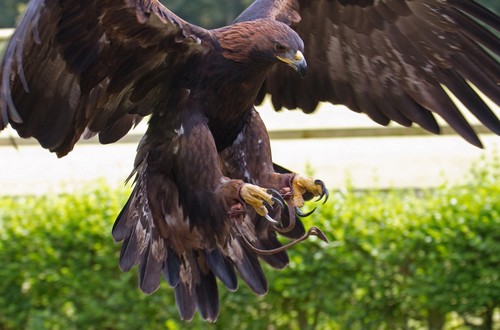 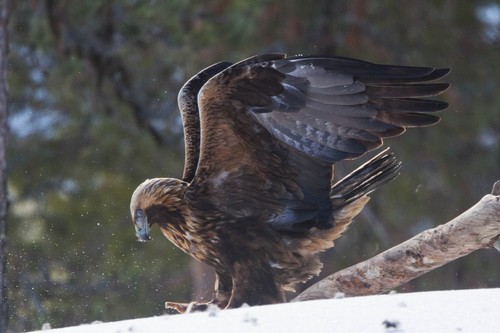 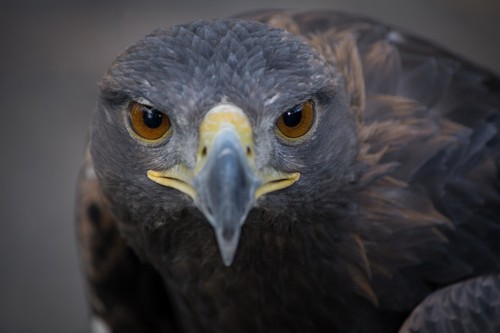 Where the Golden eagles can be found

Golden eagles are found in the northern hemisphere. They are popular in the western parts of North America. In Mexico, golden eagle is a national bird. They are found in Alaska, Canada and western continent of U.S. They are also found in Asia, Northern Africa and Europe also in German and Austria. 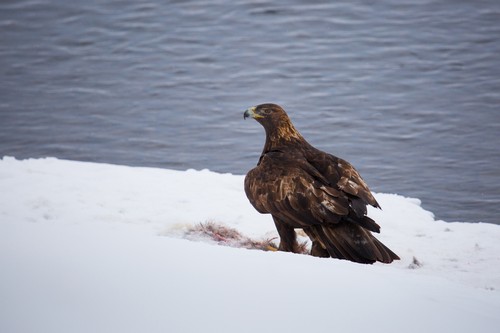 Many countries including Mexico, German, Austria use golden eagle as a national Bird. Golden eagle’s size and shape makes many people want to travel to far places to see it. Its ability to run like lightning and capture its prey is something that many people would like to see. The way it uses its strong razor sharp talons to kill its prey is also something anyone wouldn’t want to escape their eyes.  This is the reason why these countries found out that they would use the golden eagle to make money and to economically boost their countries.

Many tourists pay visit to countries where these birds are found. This is the reason why I said it is worth millions of money because it boosts the economy of the countries where it is found, not to mention that many people get employment in the hotels that serve the tourists. 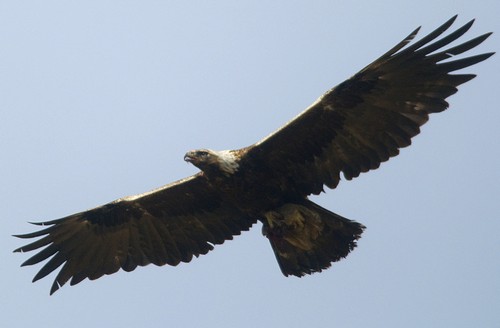 This bird is strictly guarded and all the countries where golden eagle is found have set a law to restrict it from being killed. This is how important it is to the government of those countries.

Golden eagle has a long lifespan as compared to other birds. It can withstand all climatic changes which would otherwise shorten its lifespan. It can also fight other animals like the deer and the lion that would dare attack it using its strong sharp beak, the razor-sharp talons and its big strong feathers. This bird has a natural lifespan of between 15 to 20 years which is a long lifespan as compared to other animals.