For most people when they hear about Giant Panda the only thing that rings in mind is their unique black and white spots which make them adorable and attractive throughout the world. Others may even think of the famous TV series Kung Fu Panda. In China, where they are highly populated, in the ancient days, they were viewed as symbols of fighting evil spirits. However, today in China, they see the animals as a national treasure, and they have set in place strict measures to ensure they are protected. There are other facts that are interesting about the Giant Pandas that will amaze you to know.

Since 1961 Panda has been holding a significant position in the WWF foundation and they, have been the face of the WWF logo to date. Another thing is that Giant Pandas belong to the family of bears who live in Bamboo forest; they are the rarest member of the family. Here are other facts you may not have known about this rare species from the bear family.

Description and Size of Giant Panda

Distinguishing Giant Panda with other Pandas is easy. They are considered to live up to their name even with the appearance of their size. An adult Giant Panda measures between 4 and 5 feet tall and weigh about 136 kilograms which mark a significant difference as compared with their distance relatives the Red Pandas who measure around 65 centimeters and weigh around 9 kg. Although Giant Pandas are considered to be almost the same size as the American Black Bear.

Pandas have eyes that resemble those of a cat which helps them to see at night and hide in case they observe danger from a distance. They also depend so much on their sense of smell to tell whether they are tending on the wrong territory.

Extended studies have been conducted by various scientists to find the original classification of Giant Pandas. There has been confusion on how they should be classified and to which family they belong. For years, scientists kept wondering whether they are a type of raccoon, bear or if they belonged to a totally different family. However, after studying their DNA, it was confirmed that Pandas are close relatives to bears and that they belong to the same kingdom.

What does Giant Panda eats?

When it comes to choosing between their diets, it may not be easy to tell whether they are vegetarians or carnivores. Giant Panda is known to eat both plants and meat. Although they are not suitable for hunting due to their size, they often find their prey from the leftovers of other animals in the forest. However, the Giant Pandas are known for their Bamboo eating habits. They spend more than 12 hours of their day just eating Bamboo. Thus eating up to 12.5 kilograms of Bamboo in a day. The reason they eat too much is that Bamboo is low in nutrients. Their diet also consists fish, rodents, birds and insect. This makes them to be omnivores since they feed on both vegetation and meat.

You may wonder how possible they manage to feed on Bamboo and still move around. Their stomach unlike any other animals is ready to digest the wood. On the inside, it is covered with mucus which protects it from being punctured by splinters from the wood their stomach wall have special muscular ability to digest Bamboo entirely.

During summer seasons, Pandas are known to climb as high as 4,000 meters just in search of food. They have an extra molar and pre-molar teeth which help them in crushing any stem of the plant to the size that they can eat. The size of their molar teeth is large than any molar teeth of a carnivore. They also have an extra digit on their hand which helps in tearing the Bamboo. Giant Pandas are known to feed on about 20 different species of Bamboo.

Giant Pandas are unique when it comes to mating. They usually mate in spring, and this makes them unique from all other animals especially from the same family. During this time, male Pandas will use their high sense of smell to find female Pandas as well as avoiding other male pandas.  After mating, female Pandas will carry their pregnancy up to five months then give birth to their cub Pandas. Often, they will give birth to a single offspring. Its non-common in the Panda history to give birth to twins. However, female giant pandas do not usually deliver twins, but if they do, only the strongest of the two cubs will survive.

When the cubs are born, they are completely blind, and they cannot even crawl until they are three months old. At birth, cub weighs only 140 grams. They depend wholly on their mother until they are about 18 months old this is when they are kicked out to find survival on their own. Giant Pandas are born with a single white color, but as they grow, they keep gaining their beautiful white and black color which makes them unique and attractive.

The young cubs are fully considered to be grown or to attain maturity when they are between four to five years for the female and six to seven years old for the male cub. However, something that is more interesting is that all cubs have names. Like the most famous Panda which even found its way to attract the WWF by appearing on the logo is known as Chi Chi.  Just recently in 2015, the oldest Panda was discovered by the name Jiajia it lives in Ocean Park, Hong Kong. Chi Chi lived in Zoo of London between 1958 and 1972 and that’s why she happened to get the appearance of the world wildlife fund logo. She was bought for 12,000 Euros. Today Pandas have a high value since they are rented for about one million dollars per year.

Where does Giant Panda live?

About 2 million years ago, Pandas were roaming all around in China. However, due to deforestation and the increasing number of poachers, Giant Pandas currently find their habitat on areas that are secluded by humans in search for areas for cultivation and settlement. This has seen the number of giant pandas declining every day.

Pandas don’t share their areas, they mark and guard their territories so much, and that means that Pandas cannot feed on the same territory. Every Panda moves on its own in an area that it has marked. Often Giant Pandas territory measures about 1.9 square miles. The only time they get closer is during spring when they are ready for mating. When Giant Pandas cross to other Giant panda territory, the two will end up growling and swatting at each other and to some point they even bite one another.  They mark their territory by brushing a scent which is produced by scent glands under the tail.

Pandas do not hibernate, however during cold weather; they seek shelter in hollow trees or at times in caves within their territories. It’s also rare to find Giant Pandas looking for resting areas and when this happens they only lie on the ground.

Due to this reason, Pandas don’t move in search of food. When human occupy their space, Giant Pandas are known to starve themselves to death. For this reasons, today, there are about 1,000 Giant Pandas left in the wild. However, the China government has come up with ideas on how they will save this species for future generations. Therefore, they have built about 50 Panda reserves with the aim of protecting them. Although it’s only 61% of Panda in the country that enjoy the protection of the reserves. 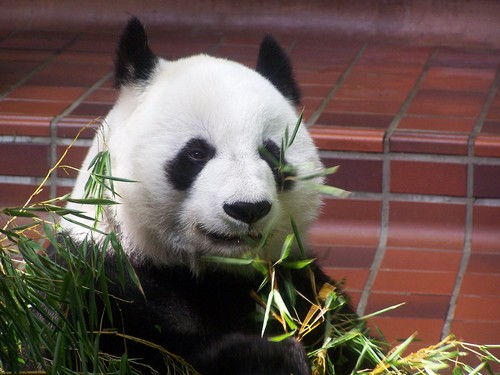 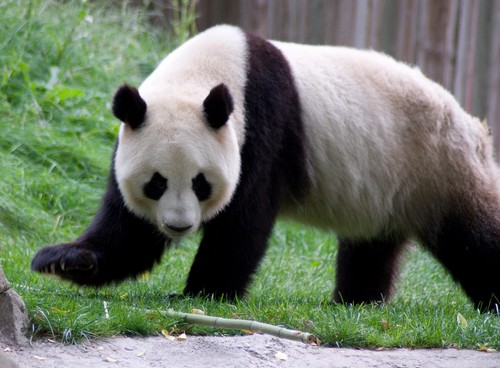 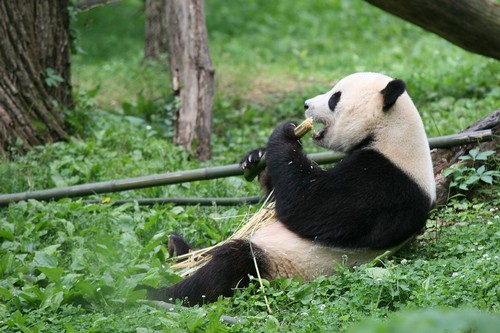 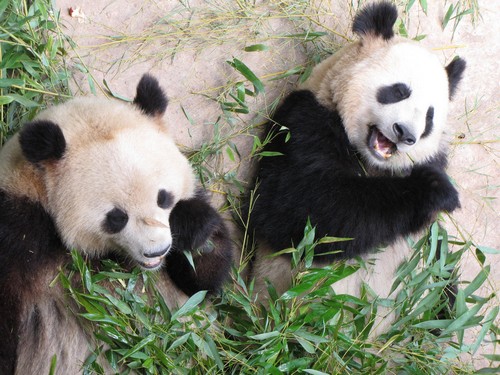 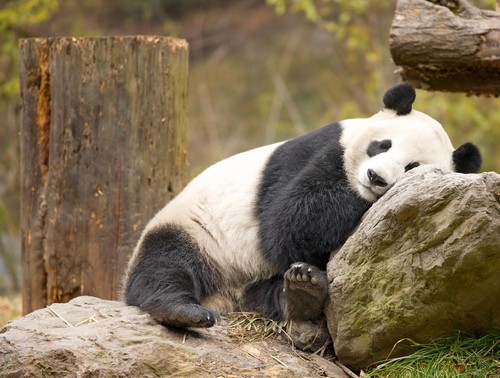 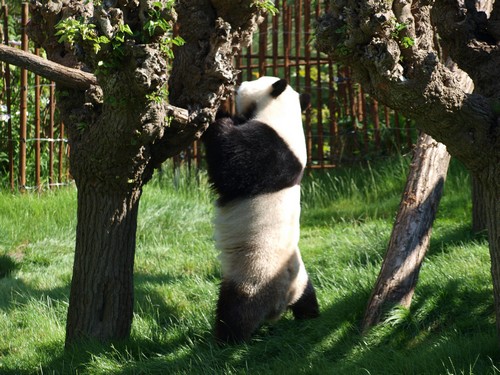 Pandas are known to have different patterns as compared to their body size. They are good swimmers and perfect tree climbers. During danger, Giant Panda seeks refuge very fast at nearby trees or even dive in the water and swim faster ahead of their chasers.

Like other mammals, although human is not in the list, male Pandas have a bony rod, baculum along the soft penis tissue. The difference between them and the bear is that these tissues in bears are directed forward, and straight while in giant panda it’s directed backward, and it’s S-shaped.

For them to have the ability to feed on Bamboos without difficulties is through the use of the extra thumb which is a unique bone that proceeds from the wrist. This bone is called pseudo-thumb.  They use this bone to manipulate and hold bamboo. 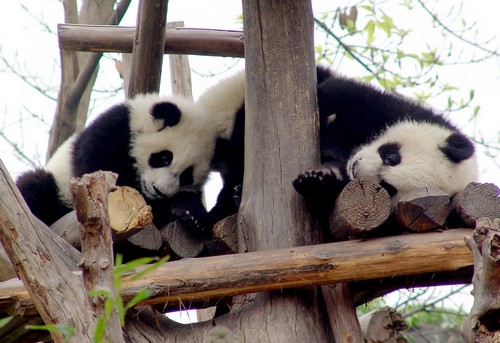 Human has been endangering these animals for the longest time in history. They have been poaching them for their fur. However, the Chinese government has placed strict laws in place to ensure the protection of the species. This law has helped in reducing the number of Giant Pandas that are poached. Although even with this law in place, still, some Pandas fall into the hands of poachers by accident as they poach other animals in the wild. The main danger of the species is the die-back of bamboo forests.