Gerenuk is at the top list of the animals I find elegant and very beautiful. I am sure that if you have ever seen it you can attest.  One look at it and the next thing you will be thinking of, is how you can take its photograph.  You will be forgiven to think it is a young giraffe.

Gerenuk is very tall with a very smooth coat.  It resembles a tall gazelle.  It is a species of an antelope which belongs to the family of the gazelle.  It has a long slender neck and four slender legs or limbs.  It has large round ears and a small flat wedge-like head. The males are larger and taller than the female.  They are 89 cm to 105 cm tall while the female are 80 cm to 100 cm tall.  The male has a mass body weight of around 31 kgs and 52 kgs.  The females’ body weight ranges between 28 kgs to 45 kgs.  Gerenuk’s tail measures between 25 cm and 35 cm. It has a reddish brown back and lighter brown sides.  The underbelly and the inside of the legs have a cream color.  These colors are clearly visible on the smooth coat.  Gerenuk has a pointed mouth.

The males have strong thick S-shaped horns which are curved to the back and slightly to the front at the tips. The horns measures 25 cm to 44 cm.  The female have no horns and therefore it is easy to identify them from far.

In the front of the gerenuk’s eyes are pre-orbital glands which emit a strong scented tar like substance which they use to mark their territory.  The male gerenuk also uses this strong scent when performing the mating rituals. These scent glands are also found on their knees and in between the split hooves.

Gerenuks are herbivorous.  They feed on flowers, shoots, herbs and fruits.  They also feed on leaves and branches of trees and those of plants. Just like a giraffe, gerenuk can reach higher branches and twigs of very tall trees by standing on its hind legs and stretching its neck. Gerenuk feeds on the ever green vegetation, that is, the vegetation which is always green regardless of whether there is rain or not. The pointed mouth helps the gerenuk to extract leaves from thorny vegetation.  Gerenuk’s main activity is looking for food.  Gerenuks rarely drinks water and may even go for their entire lifetime without water.  They live on the moisture from the plants they feed on.

Gerenuks have mating rituals.  The male gerenuk will approach a herd of female gerenuks and identify the female it wants to mate with.  It will then approach the female and repeatedly tap her belly.  It will also rub its body against hers.  It also deposits some scents into her body by rubbing her with his pre orbital glands.  After all the ritual, the female is ready for mating.  After mating a young gerenuk will start developing in the stomach of the female gerenuk.  The gestation period is normally 7 months after which one young gerenuk is born.  At the end of the seventh month when the female is about to give birth, it leaves the rest of the gerenuk and hides in an isolated place.  It then gives birth to a calf.  It licks the young calf and eats the afterbirths.

The female will hide its calf in the grass and visit it 2 or 3 times a day so that it can suckle her milk.  Whenever it pays its calf a visit, the female gerenuk licks the calf clean in order to remove any scent that may lead the predators to the calf.

When communicating with its young one the female bleats softly.  After the calf is strong enough to look for its own food, it joins the rest of the gerenuk.  The mother will continue breast feeding the young calf until it is between 1 year and 1.5 years.  It will wean it and the female is again ready to breed.  Because the gerenuk have no specific breeding time and can breed any time their population increases very fast.

Most gerenuks are found in Africa.  The name gerenuk was given them by Somali, a member of usually Muslim people of Somalia which means ‘giraffe – gazelle.’  You will find gerenuk in Tanzania, Ethiopia, Somalia, Kenya and some other dry areas of Africa.  Gerenuks prefer living in dry areas like the deserts, scrubland, savannas and woody areas.

Gerenuks live in groups.  Some groups are composed of females and their young ones.  Others are exclusively for males.  You will also find males who live each alone in his own territory and they stick to these territories.  The female will tend to expand its territory as they and their young ones increase.  Gerenuks do their activities during the day and rest at night. When the sun is too hot you will find gerenuk standing and resting in the shade mostly under a tree. When it rains you will find them exposing themselves in the rain most probably in order to cool down.

Gerenuks are very calm animals.  You will never find them fighting.  They also do not travel long distances.  It is thought that probably they stay in one area for long because they want to save their energy so that they can have more energy  looking for food.

Like all other animals, gerenuk have enemies.  There are animals who will salivate at the sight of a gerenuk.  This is because they think they have seen their food for the day. Lions, cheetah, leopard, wild dogs, are on top of the list.  Hyena will kill and eat the injured gerenuk.  They also kill and eat the young gerenuk especially the newborn.  A hyena will search through the grasses to see if it can come across a gerenuk calf that has been hidden by its mother. 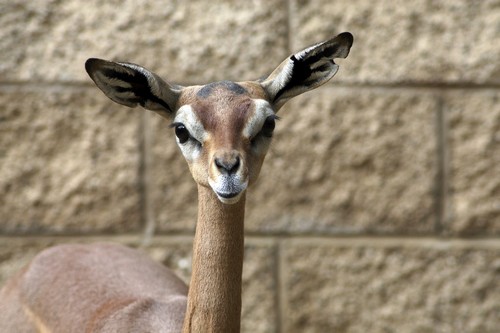 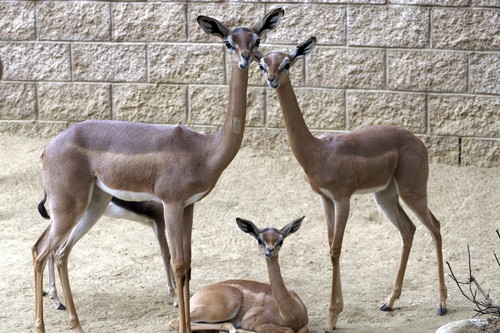 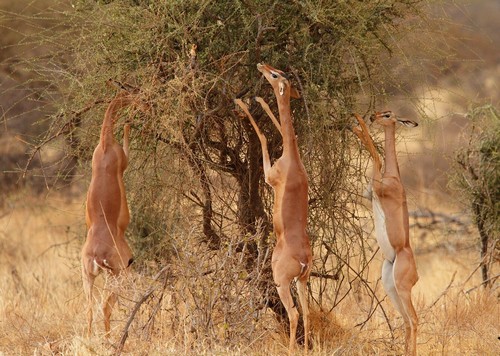 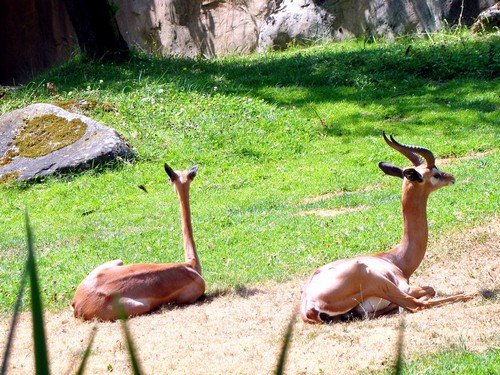 Gerenuks who are in captivity live for between 8 years and 12 years.  One cannot determine the lifespan of the gerenuks who are in the wild because most of them are killed by their predators at an early age.  Others will die from the harsh climate and diseases.  Others may die for lack of food especially those whose habitat has been destroyed by human beings.

As the human population increases there is need for more room for expansion.  Trees are cut down, homes and infrastructure are built.  More trees are also cut to give room for agriculture.  In so doing, gerenuks’ habitat is destroyed.  The trees from which their food comes are destroyed living them without food.  Gerenuk and most other animals breed when they have enough food and with the scarcity of food, they are not able to breed.  Some will also die of hunger.  All this reduces the population of the gerenuk.

Some communities are known to hunt the gerenuk for meat and for the skin.  The smooth skin of the gerenuk is used to make handbags, wallets, shoes and belts. These people will sell the skin and get some income.  This business has increased as the demand for the skin increases.  During the dry season when no crops can survive the heat from the sun, the people kill gerenuk in order to get meat for themselves and their children.  In so going the population of the gerenuks has decreased tremendously. 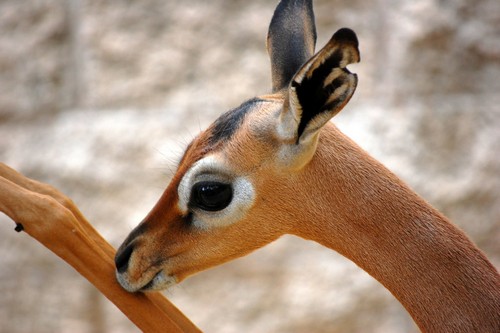 As the human beings cut down the trees so that they can get more land to build homes and infrastructure, animal’s habitat is destroyed and so many animals die as a result.  The animals which survive will now prey on any available animals.  The gerenuk finds themselves in a situation where their predators are so many.  Every day many gerenuks are killed by other animals.  The population of the gerenuks has decreased as a result.

The government of the countries where gerenuks are living, found out that the population of the gerenuk has decreased tremendously and if nothing was done the whole population would be wiped out.  They captured the remaining gerenuk and put them in captivity.  They incorporated the gerenuk under the wildlife Act and stern warning was put against anyone found killing the gerenuks.  The governments also said that before the trees are cut down people should check and see if some wild animals will be affected.  The ones likely to be affected should be captured by the concerned people and taken to the zoo. 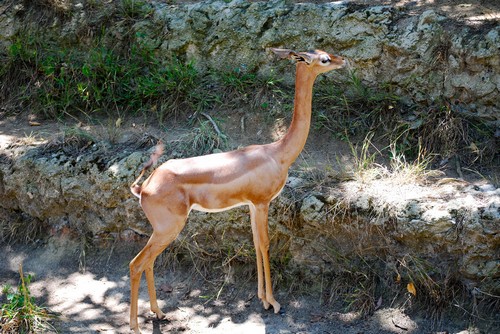 Most people will travel far and wide to come and see gerenuk. Gerenuks are elegant and beautiful animals and most tourists will want to take a photograph with them and if that is not possible they want to take its photograph.   These tourists boost the economy of the country they travel to.  The local people also benefit because they are employed in the hotels where these tourists spend their time and the tourists also buy different commodities from the local people.