The fruit bat is one of the few animals that has numerous names; fruit bat, Megabat, flying fox and even old world fruit bat. It is usually confusing for people when they hear the bats called flying foxes because they have no relationship with the foxes.
They are called fruit bats mainly because they look like dangling fruits when hanging on trees. They also do not belong to the same biological family as the common insectivorous bats.

Fruit bats exist only in the old world, especially in tropical and subtropical distributions. They can be found in eastern Mediterranean and Southern Asia. However, these bats cannot be found in southwest Australia and northwest, Africa. The bats family can be divided into two groups, the megabats which are relatively large up to 16 inches in length and weigh a couple of pounds and the microbats which are smaller and weigh a couple of ounces.

The physical appearance of fruit bats is influenced greatly by their biological characteristics, which according to scientists is a lot like that of humans and monkeys. These bats are therefore not similar to insectivorous bats in any way. Fruit bats have a thick furry coat because unlike other bats that live in caves and prefer to stay in buildings during winter; fruit bats will always be found in the open. This is good news if you have seen several of them around your place because they will not enter your home like insectivorous bats do.

They also have long snouts to help make their sense of smell excellent. Their big eyes allow them to have perfect eyesight. They see just as clearly as humans do during the day and see even better during the night. Unlike other bats, therefore, they do not use echo to locate the food they eat because their eyesight is excellent both at night and during the day. The Egyptian fruit bat is the only fruit bat known of using echolocation to navigate caves and forests with its high-pitched tongue clicks. They also have pointy ears. The wing of a fruit bat can be 6 feet long. An adult fruit bat can weigh up to 1.6kg. Most of the fruit bats, like all bats, enjoy sleeping upside down for most of the day and look for food during the night.

It is, however, important to note that there are 173 species of fruit bats in the world. What this means is that they can easily be confused for microbats because their size and physical appearance vary slightly depending on where they are located. There are therefore some fruit bats that are smaller than two inches and others that are 16 inches based on their location.

The evolution of fruit bats is one that is fascinating for most people.  According to legends, it is said that once upon a time, all bats used echolocation and ate insects. However, because of migration, climatic changes and shifts in other universal factors, bats began to evolve too depending on where they lived to survive. As such, there are vampire bats that survive by sucking blood and fruit bats that live only on trees in colonies and are exclusively vegetarian. Their circumstances warranted them to consume other types of food to make up for the lack of insects and their numbers too.

Echolocation and flight are done at the same time. As they evolved fruit bats started becoming bigger and heavier than other bats.  They, therefore, had to make a choice between flying and echolocation because they were unable to do both at the same time. Their weight could not allow them to make wing and tongue clicks fast enough for echolocation to work in their favor.  As a result, they stopped echolocation all together and left the caves. To make up for their lack of echolocation techniques, as nature would have it, they evolved: their sense of smell improved and their eyesight became sharper.

Their love-hate relationships with humans

Their love-hate relationship with people begins and ends with food. These animals are called fruit bats because they mainly enjoy fruits. Naturally, farmers who invest in cultivating fruits for sale do not like them. In most cases, fruit bats travel in groups known as colonies. Each colony has its own tree where they choose to rest. If these colonies choose to invade your farm, therefore, it is highly unlikely you will be able to harvest anything when the season comes.

Bee farmers also dislike fruit bats because they eat all the nectar and the bees have nothing to make their honey from. Farmers, therefore, choose to kill them or frighten then into choosing other places to settle. This is not as easy as it sounds because they are in large numbers and the fact that they come out at night when most farmers are sleeping.

In some parts of the world, fruit bats are delicacies. Its meat is considered soft and tasty. People in these areas, hence, choose to hunt these bats and cook them as food. It is their life cycles; they eat food planted by humans and humans eat them.

Bats are known to be disease carriers. Most of the time, fruit bats are not killed by anything other than age or accidents. Scientists, however, have found that fruit bats are reservoirs of some of the worst viruses known to man. In an epidemic of the Marburg virus in 2007, it was concluded that the cause of the outbreak was the Egyptian fruit bat. Fruit bats have also been found to be reservoirs of Ebola. Because they are reservoirs, these bats do not show any symptoms of the disease although they can spread the virus to human beings and other animal species.

People who enjoy eating these bats are advised to take caution because they could cause them harm. For instance, in some areas of the South Pacific Islanders, people died from poisoning caused by the bioaccumulation of plant toxins, which were in the fruit bats they consumed. It is interesting to note that the bats were immune to the toxin, which was already in their systems.

The behavior of the fruit bats is not unique to that of other bat species. Like all bats, these bats spend their days hanging upside down from trees and all night looking for food. Because of climatic changes and seasons, fruit bats will travel long distances to find food when food is scarce. They wrap themselves with their long wings as they sleep to help them conserve heat, especially in the cold seasons. 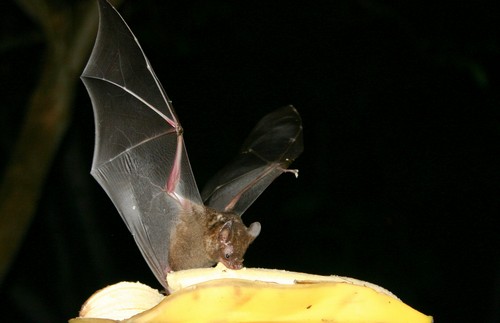 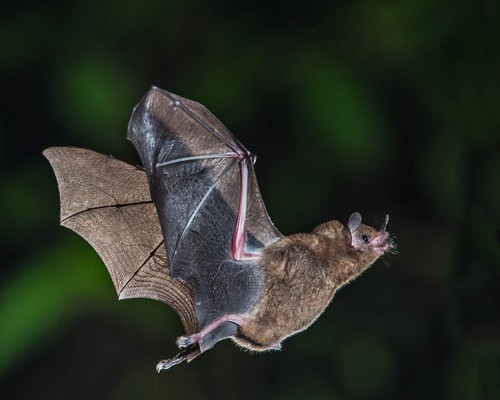 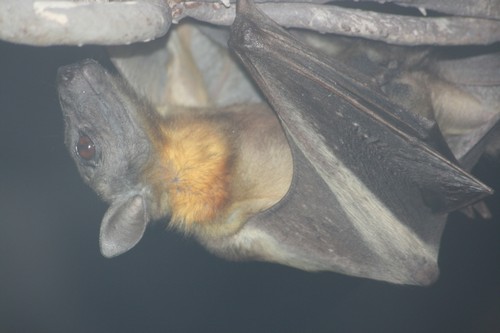 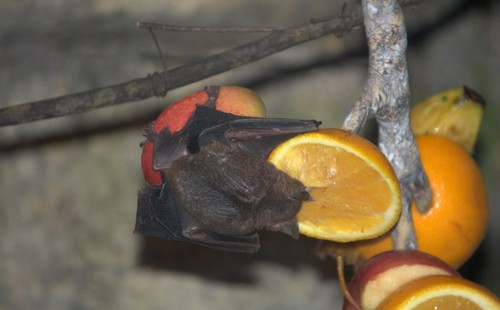 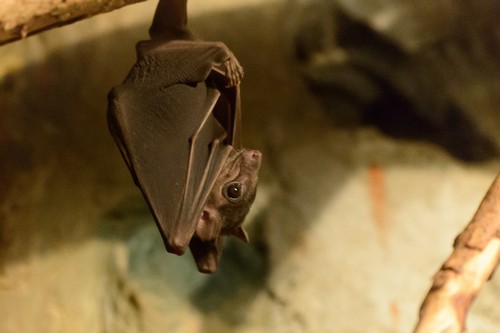 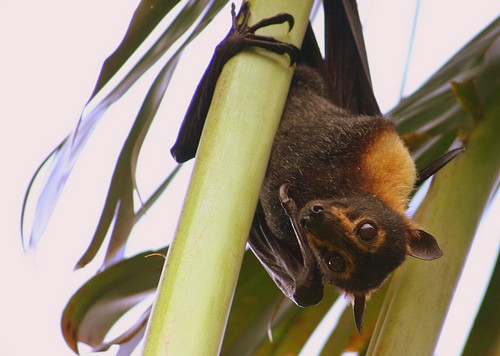 Their diet includes mostly fruits. According to research done, fruit bats enjoy fleshy and juicy fruits such as Mangoes, bananas, figs and avocados. They never actually eat the entire fruit. Instead, they use their teeth to bite off parts of the fruits and their long tongues unroll to remove flesh from the fruits. They then squish it in their mouth to remove the juices and spit out what is left. Although they enjoy fruits, they enjoy nectar from different plants too. They are frequently seen enjoying tree sap as well.

Most of the fruit bat babies are born in October because most of the mating happens around April. Bats have a gestation period of six months. At birth, babies have their eyes open and have fur all over their body except around the belly. The belly is usually furless to ensure they get warmth from their mother. Usually, bats are born when the mother is upside down. The mother’s wings act as support to ensure before the baby can hold on to the mother’s nipple with its teeth and hang on to her with its feet. 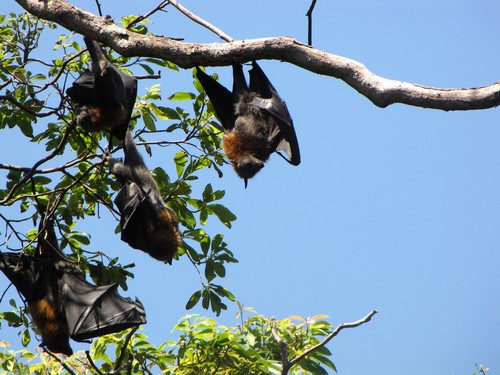 For the first few weeks, the baby will be with its mother all day and all night. When he can keep himself warm, the mother will leave him in a warm place at night and go to find food. When the need arises, the mother can carry its baby for long distance. The mother will carry the baby from one camp to the next until it learns how to fly on its own and feed itself. This could take up to three months.