You might have seen them being depicted in animated movies, but this is actually a real animal. The fossa as it is known in English is known scientifically as Cryptoprocta ferox. This unique animal is found in the island of Madagascar located near the coast of Africa. This is the only place where fossa can be found.

The fossa is the largest carnivore that can be found on Malagasy island in relation to all carnivores on the Island that are mammals. Interestingly, the fossa has flexible ankles and this gives it the ability to climb up a tree as well as climb down with the head-first in either direction. The flexible ankles also enable it to jump from tree to tree.

Its population is spread widely throughout Madagascar, however in low densities. They occupy only the areas that have forests because they prefer forests for both cover and hunting grounds. They are at the top of the food chain in Madagascar, being the top predator and the only threat for the fossa is human beings.

Features of the Fossa

The fossa actually almost looks like a cougar, although it has more muscle in its limbs and the body is more slender as compared to the cougar. It has a long tail and its length is almost the same as the length of its body. Its head size is larger than that of a cat and it has a short and broad muzzle. Its ears are rounded. Similar to most cats, the eyes of the cougar have wide pupils and when they contract they become slits.

They have great eye vision and can see well during the day and during the night and this enable them to hunt at night as well. The length of the fossa’s; head and body can be up to 80 centimeters with a tail that can be as long as 70 centimeters. Males are generally larger than females and a male fossa can weigh up to 9 kilograms while a female can weigh up to 7 kilograms. There have been reported cases of individual fossa that grow to an extra-large size and they can weigh up to 20 kilograms.

The large fossas are more common in the southern and western parts of Madagascar Island while the smaller individuals are found towards the north of the island. Furthermore, they have short and dense fur with no patterns or spots on their fur. The claws are semi-retractable to enable the fossa to climb trees more efficiently as well as to grab prey since they are ambush predators.

They are strong animals and when it comes to health, it was noted that fossa rarely become ill. They have strong senses, with great eyesight and a strong sense of hearing and smell as well, enabling them to be great hunters.

Found only on the Island of Madagascar, fossa is widespread throughout the island, and they are the most widespread carnivore on the island. However, they are found in small populations and are found mainly In the forests since they like forests, especially forests that are undisturbed by any human activities or other natural activities.

Social life of the Fossa

Fossas are generally active throughout the day, being active both at night and during the day. However, they are most active at dawn or late into the night with sometimes, the late afternoon as well. Interestingly fossa do not use the same sleeping site again, but rather move to a new one, although a female fossa that has young one will go back to the same den over and over again.

Fossa are solitary animals and they will generally live alone within their territorial ranges, however a female that has young ones will tag them along until they are independent enough to be on their own. The range of a male fossa can be up to 26 square kilometers while that of a female fossa will be up to 13 square kilometers large. In search of food, a fossa can travel for 5 kilometers in one day.

They use various methods to communicate with each other and these include signals, sounds and scent. Sounds will vary depending on why they are being produced and a sound that shows fear will be different than the sound it makes when it wants to threaten and warn off others. There can be a high yelp which is intended to draw the attention of other fossas within the region.

Fossas have glands that are located on the chest and in the area around their anus, and these glands secrete a substance which the fossa uses to mark its scent on tree barks and rocks. They also mark the ground using these glands. They are relatively peaceful animals and they will engage in fights only during the mating season, when male fight to show dominance. 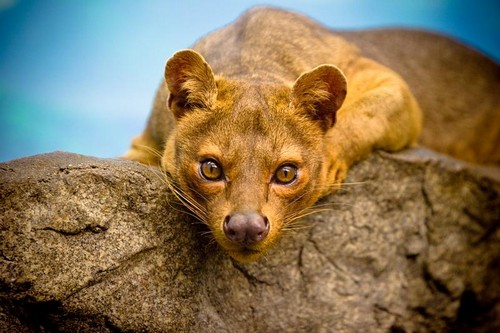 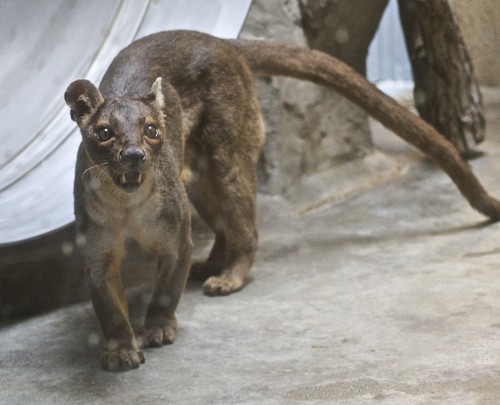 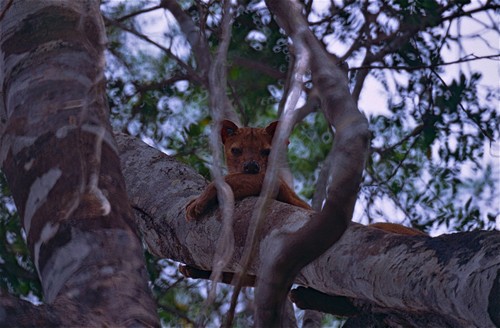 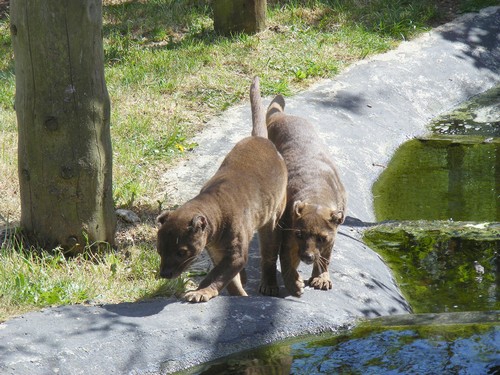 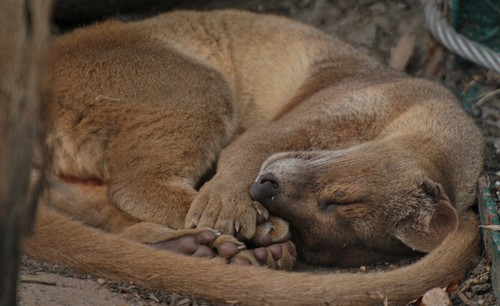 Fossas are carnivorous animals and they get there food by hunting. In terms of size, they will hunt animals that are small to medium in size. They seem to like to prey on lemurs since up to 50% of their diet is made up of lemurs. Fossa will prey on different species of lemurs, from the small ones all the way to the largest ones. They particularly like to prey on larger ones.

However, they are also capable of feeding on a variety of other animals and they will feed on small to medium sized mammals and reptiles that they find. They can feed on snakes, birds and spiny tenrec. During wet seasons when there is plenty of prey, they will generally feed on small animals, however in the dry season when prey is scarce; fossa will prefer to hunt larger animals.

They hunt their prey both on the ground and in trees, and they are known to chase lemur from up a tree, to the ground where they easily catch them. Since they are solitary animals, fossa will hunt alone, however during the mating season, they may hunt in pairs, a male fossa and his female counterpart. Apart from that, the only other time that fossa will hunt in groups is when a female fossa goes hunting accompanied by her young ones. 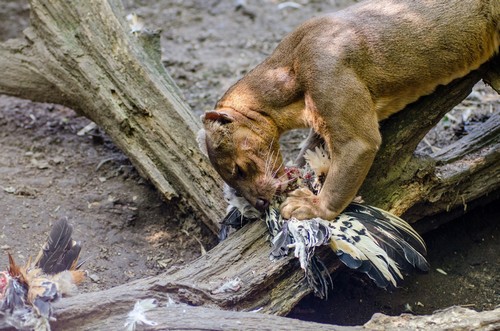 Fossas generally hunt in one subsection within their range, but when the number of prey decreases in density, they move to another subsection of the range. They are known to also prey on some of the animals that human beings keep, such as chicken, small calves and goats. With their ability to feed on a wide variety of prey, the fossas have been able to dominate most of the terrain and niches in Madagascar and that is part of the reason why they are the largest carnivores on the Island.

Reproduction of the Fossa

The reproduction period for the fossa is the period from September to October although late mating can occur up to December. In the Northern hemisphere, however, fossa mate in the period of March to July. A female will have her mating site where she will stay for this period and in one mating site there may be males numbering up to 8. It is the female who chooses which male to mate with and she may choose to mate with more than one male.

The female fossa will produce various vocalizations so as to entice the male fossa to mount her. The mating process may last for up to 3 hours. Repeated copulation with one male may be repeated or the female may choose to mate with other males within the vicinity. After mating, a male will stay with the female for up to one hour before leaving. 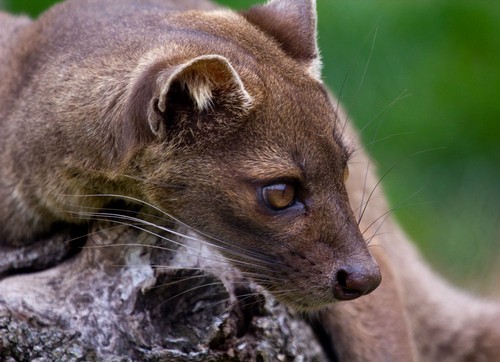 One female will stay at one mating site for up to one week, mating with different males. This is seen as a strategy of ensuring that she gets to mate since with low population density, if she were to keep moving, it may take time before she finds male fossas to mate with.

A female fossa gives birth to a litter of between 1 to 6 and birth takes place in concealed areas like dens located underground or in the hollow of large trees. It happens after a period of around 90 days of gestation. Young ones are born blind and toothless, but the eyes open after 2 weeks. They start taking solid food when three months old and a month and a half later, they start to venture outside the den. They become independent when they reach one year.