Flamingos are large colorful birds that are easily identified by their long tiny legs and their long neck. They are flamboyant birds and really like to show off their stride. The birds were previously debated to be classified with ducks, but eventually they got their own classification, in the family Phoenicopteridae.

They can fly like other birds, but are not often seen in flight. They often like to stand on one feet, with the other feet tucked beneath their body.

Flamingo’s generally live in areas where there are large saline or alkaline lakes, or lagoons without much vegetation. They can survive in both warm weather and cold areas, and live in either mountains or low land areas. As long as there is adequate supply of algae, small insects and similar food sources, flamingos will thrive. They live in colonies, which can range from as little as 50 flamingos in a colony, to up thousands. The largest group of flamingos in the world reside in East Africa, where a single colony has up to 1 million members. The birds are relatively non-migratory, but due to changes in weather and water levels at their breeding areas, colonies might migrate to survive. The colonies which reside in high altitude places migrate during the winter when the rivers and lakes freeze, while drought may also force some flamingo colonies to relocate.

There are six species of the flamingo, and each specie might have slightly different feeding habits and breeding locations. The Greater Flamingo is the most widely known specie, and lives in parts of Africa, Europe and Asia. The Lesser Flamingo can be found in Africa and North West India. The Chilean Flamingo, James’s Flamingo, Andean and the American Flamingo, can all be found in South America, and the Caribbean Islands.

The flamingo is a very tall bird, with the Greater Flamingo growing up to 47-59 inches, with a weight of up to 3.5kg. Male Flamingo’s weigh more than the females and have a much longer wingspan. It is very difficult however to determine the sex of a flamingo just by looking at them. The flamingo has a wingspan that ranges between 40-60 inches.

Their feathers colored with variations between the different species. The new-born chicks have greyish white feathers after they hatch. Adult flamingo’s very bright feathers, and their colors ranges from shades of pink, crimson, and sometimes shades of orange as well. Their feet are also colored, and may vary from orange to yellow, depending on the species.

Flamingos have very long legs, growing up to 49 inches depending on the species. Their knees are located very close to their body, and might not be visible. The part that looks like a knee halfway up their legs is actually their ankle. They possess webbed toes which aid them in swimming. They also have a very long neck which is designed for maximum twisting, containing 19 elongated neck vertebrae.

The flamingo has colorful eyes at well, with adults having yellow eyes. Like other birds, their bill is adapted for feeding in water, and could be pink, black or cream colored. Their tongue is designed with tiny spikes to help sieve food particles out of water.

Flamingo become sexually mature at about six years old. Breeding occurs many times during the year, and may depend on factors such as rainfall and availability of food. Flamingos have a lot of courtship rituals, and the males will often group together to perform dances, which they do by running with their head pointed to the sky and their necks held out.

They could be regarded as monogamous animals, and they have been known to have life partners, however, some flamingos have been observed mating with more than one partner. Females initiate copulation when they choose a mating partner. She will walk away from the group, with the chosen male following. She will then lower her head and spread her wings, inviting the male to mount her. The male will climb the female and stand on the joints of her wings while copulating.

Usually about six weeks before a female lays eggs, she begins to build a nest, and the males also help out. The nests are built with stones, sticks and mud, and are built high above the ground to keep the eggs safe from flooding. These nesting sites are aggressively defended from other flamingos which occasionally might want to take over an already built nest and lay their eggs.

Females usually lay a single egg, though there have been records of some flamingos laying two eggs. The eggs are white, but could become pale blue in color after being laid. The egg is incubated by both the male and the female flamingo, and this period lasts between 27 to 30 days. The eggs are regularly turned, and any egg that falls off a nest is abandoned. The eggs will take about 24 to 36 hours to completely hatch, and during this period, the chick frequently calls out to the parents, and they in turn respond with anxious honks.

The chicks have a red beak and swollen legs at hatching. The red beak eventually changes to black and the swelling of their legs goes away within ten days. Flamingo’s pay great attention to their chicks, and will not feed any chick that is not theirs. After about seven days, the chick will be strong enough to leave the nest, by which time it would be strong enough to walk. Both parents are involved in raising the chicks, and will remain close as the new-born chicks begin to explore their environment.

In large colonies, chicks form large groups known as crèches. The parents can differentiate their chicks from others in these crèches using special calls. Both the male and the female flamingo have glands which produce a secretion like milk, which the chicks are fed with. This secretion is caused by a hormone known as prolactin, and it contains protein and fat.  The secretion is red in color due to the presence of a pigment known as canthaxanthin. The chick’s store this pigment until they begin to grow feathers, then it is deposited in their feathers.

Flamingos use a variety of sounds to communicate, and in colonies they are very noisy. They use these honks and growls to communicate to their chicks, and also to keep together while performing certain rituals, such as mating dances. Different species of the flamingo also have their own slightly different calls. They also communicate with visual displays. These visual displays are believed to aid in releasing hormones, to ensure that as many flamingos breed in a particular breeding season. These visual displays include marching, in which flamingos form packs and match together as one, before suddenly changing direction.

They also do head-flagging, stretching their neck high up and turning from side to side rhythmically. Flamingos need to run for a small distance in order to gain momentum to fly, and they will normally take off towards the direction of the wind. They look magnificent during flight, with their long necks stretched and long legs behind them. 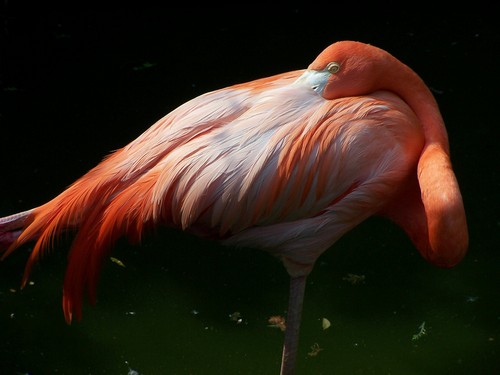 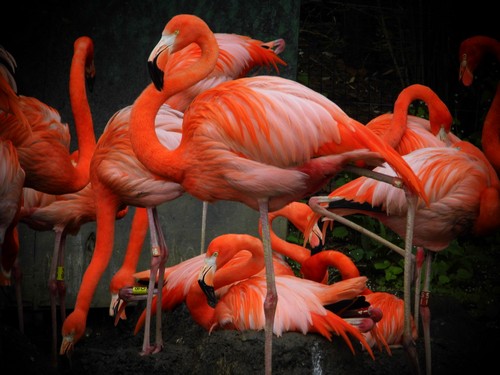 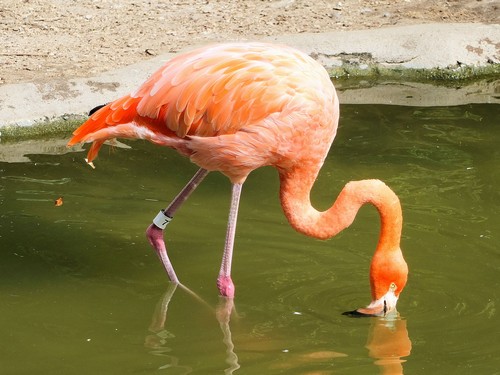 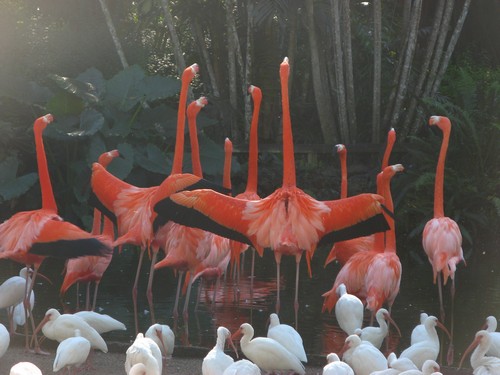 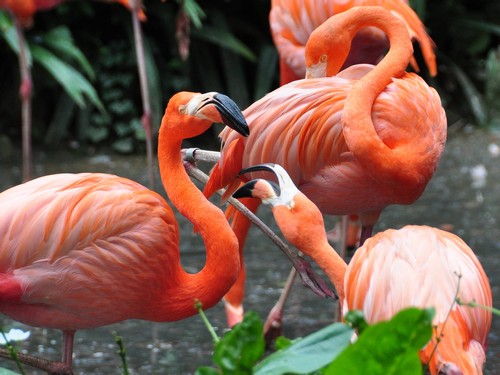 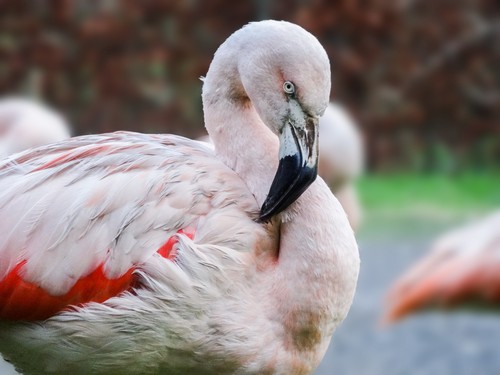 Flamingos have a diet that consists mainly of small insects, small fish, the red and the blue-green algae, and also crustaceans. They are regarded as omnivores, as they feed on both plants and meat. Flamingos are usually pink or orange in color due to the fact that their diet contains a large quantity of a pigment contained in an organic chemical known as beta carotene. There are different levels of this chemical in food in different parts of the world, which is why there are variations in the coloration of flamingos across the world. If a flamingo’s diet changes and they stop eating food containing their color will begin to get pale.

The diet of a flamingo depends on the kind of beak they possess. The different species have different kinds of beaks. The Lesser Flamingo, the James, and the Andean flamingos, all mostly eat algae. This is because they have a beak known as the deep-keeled bill. The Greater, American, and the Chilean flamingos have a diet consisting more of small insects and fish, because they have a different kind of beak, known as the shallow-keeled bill. One thing common to all the species is that they stir up the depths of the lake with their webbed feet, then use their beaks to catch food. 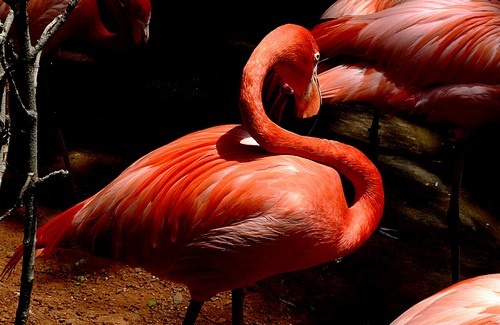 Flamingos have been affected by the deforestation by humans, which affects their breeding and feeding grounds. Irrigation also reduces the water levels in many areas where flamingos thrive, and disrupt their feeding and breeding habits. These elegant birds also have a lot of predators, and the flamingo egg is even considered a delicacy in some parts of the world. Flamingo fat was earlier believed to be a cure for tuberculosis, and their tongues are also eaten.